This bike was manufactured in Austria in 1938, one year before WW2 started in this region. It was later found in Russia (former Soviet Union) and found it's way to Sweden 30 years ago. I've bought it cheap a few days ago from a 82 years old former cop in Sweden.

The petcock was stuck and filled with grime and the strange carb got a good clean. The fuel tank was quite corroded but the steel is very thick so it was treated with phosphoric acid over night.

It has a conventional battery ignition (6 V) with breaker point, capacitor and coil.

The bike will be left as is to keep it's history and be used on classic bike meets. Yesterday it was tested on a trip around the block. It starts very easy and makes 6 hp. This is good for almost 80 km/h 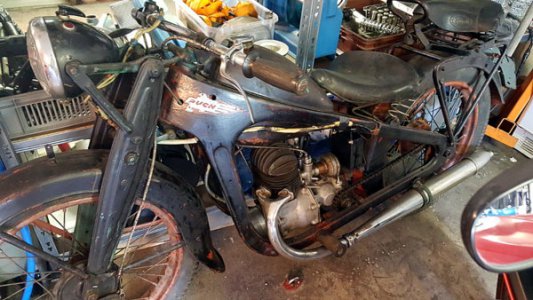 Love it, the last time I saw one of those was in the early 60's.
If I remember it had two pistons/cylinders but only one combustion chamber.
Is that what this is?

Very cool! I would keep it all original too. A wonderful piece of history.

savarin said:
Love it, the last time I saw one of those was in the early 60's.
If I remember it had two pistons/cylinders but only one combustion chamber.
Is that what this is?
Click to expand...

Yes you are right. It is called Doppel Kolben Motor and the purpose was to get a more efficient combustion. The first piston ignites as early as 1/4" BTDC.
The picture is from Wikipedia.

real nice find. I would say just take care of rust to keep it from getting worse, maybe have the gas tank lined ( not sure what it is but they put it in as a liquid and coat the entire inside of the take to keep it from getting more rust etc.) That way it will be good for many years to come. The most I see is on the wheels which should be easy to clean up and coat with something to keep the rust formation down without making it look really restored. I remember seeing one of those engines at one time but never saw it in a frame, always wandered what the bike it went in looked like. Again nice find, and a good conversation piece to take places.

Wow, it runs, looks really nice, appears to be pretty stock and complete. What more can you ask for? Especially for an almost 80 year old bike.
Quite a find!

Wow...what a piece of history. And it runs. Very cool indeed.

thats the earliest of that type engine i've seen. In the 1950s Sears Allstate sold a 250cc cycle with a Puch engine of the same design...ran pretty well

The cheapest thing in an airplane is the pilot.

Sweet. Kinda' like the "big bang" motors towards the end of the 500cc 2-stroke reign in MC GP racing.
Nice piece of engine developmental history.

That is really cool, I've only seen one of those motors in person. My small engine shop teacher in high school, Jesse Black had one of these in the class. He had a collection of older bikes he used for teaching us. Kids don't know what they miss today. And to have teachers like Mr. Black was.
You must log in or register to reply here.
Share:
Facebook Twitter Reddit Pinterest Tumblr WhatsApp Email Link
It can take up to an hour for ads to appear on the page. See our code implementation guide for more details. If you already have Auto ad code on your pages there's no need to replace it with this code
Top
AdBlock Detected