So I lucked out and inherited this lathe right when I was about to buy a Precision Matthews PM-1030v. Literally the same day.

My uncle passed away about 18 months ago quite suddenly and now my aunt is finally sorting through his crazy collections of stuff. 6 cars, full machine shop, pipe organ, etc... Turns out no one else in the family wants the lathe and mill and decades worth of tooling and accessories he got for them building and restoring steam cars and turn of the century gas cars (Model T, Curved Dash Olds, etc). While I'd rather have my uncle around, keeping his memory alive by keeping his tools in the family is still nice.

So this lathe look pretty decent, well used, but well kept in a basement shop with enough accessories that will take me a few days to sort through (at least 4 chucks, 2 faceplates, etc) and that project won't even start for another month or two as I need to wire and prep the space where it will go so for now they're still in his shop.

What's odd to me is that I can't find anything on this model number. The 110-2035 doesn't seem to exist online. The 2031, 2033, 2075 all pop up, but all look a touch different. The main difference being that the headstock does not have the gear shift levers of the 2075 in place of that the motor and spindle have a multi position pulley system with a chart for different spindle speeds (see pics).

Does anyone have any info this model number?
Best I can tell is that it's an early base model of what is essentially the Grizzly 4003 and equivalent 12x36 lathes, is that correct?
Any insight would be much appreciated.

Since my budget didn't get used for the machines and tooling, the first things I'd like to do are looking at a new motor and variable speed and a new stand.

Because of the lack of gearing in the headstock other than the reversing lever (if that's what it is), would it be possible to swap motors with a 3 phase motor and a VFD to turn this into a variable speed lathe?

I'd love to keep the garage arrangement a bit more fluid, any thoughts on mounting the lathe to a mobile workbench like this: http://www.homedepot.com/p/Husky-60...h-Textured-Black-Matte-HOLC6010BB1M/206842305
It has a claimed load rating of 2,200 lbs, so I'd hope that would work. It wouldn't be easy to move, but doable with two guys if needed. plus I need more room for tools.

Pics of this and the mill I'm getting are attached. I'll start a new thread on the mill as well... 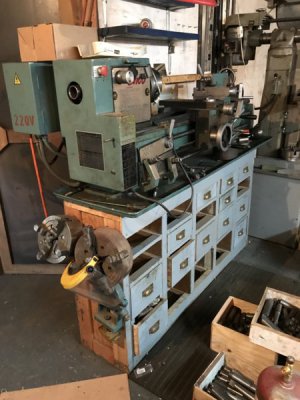 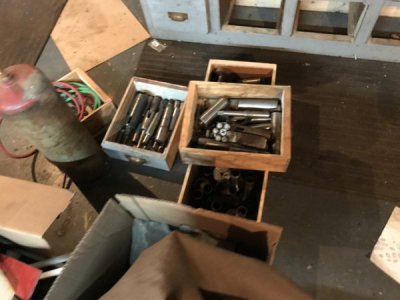 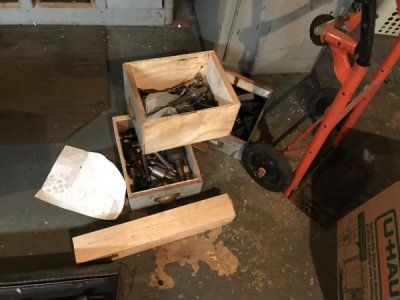 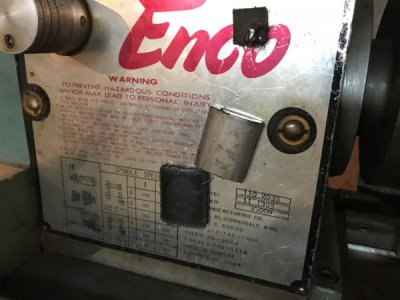 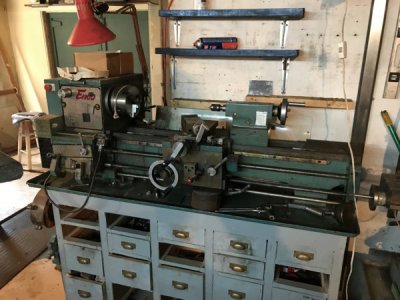 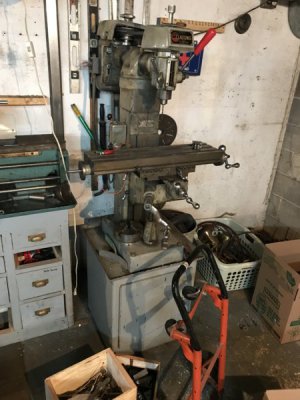 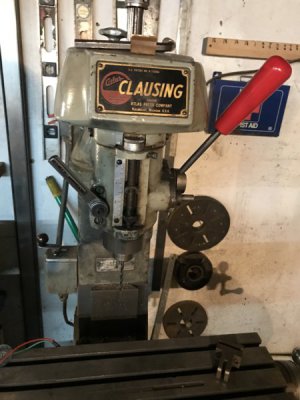 This is the Grizzly manual which may help. A lot of features may be similar or the same.

You can swap motors to make this a 3 phase motor with VFD, but you need to consider the existing motor. Mine is an IEC specification 90L, not NEMA, so the shaft is metric. If you do not get a 90L motor, you may need to make a new pulley.

The VFD can power the lathe, but the VFD needs to control the motor and not be disconnected by the lathe controls. The power lever on the carriage should not be used to turn off the motor, unless you rewire this into the 24V DC inputs on the VFD.

The Enco is a Taiwan machine. Nice machine. I would use it as is. Nice Clausing mill as well.

I have never understood the Enco model numbers either. I have a 1989 110-2072 (picture attached). It's a 12 x 36 made in Taiwan. I've looked but haven't had any luck finding a manual. I've had partial success looking through the lathe manuals listed on the Grizzly site and the Enco site before they got absorbed by MSC. 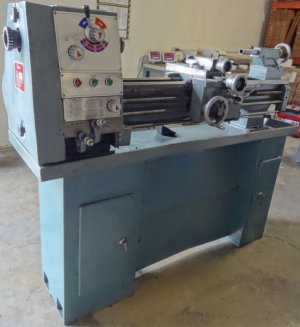 Bob Korves said:
The Enco is a Taiwan machine. Nice machine. I would use it as is. Nice Clausing mill as well.
Click to expand...

This one isn't, it says China right on it. I wish it was Taiwanese...


Dave, thank you for the link to the manual, that looks super similar and I'm sure shares many parts and specs. I need to get some measurements when I move it home and start getting it set up to really know the whole story. And I'll certainly try to run it as is before modifying it.

jung4g said:
This one isn't, it says China right on it. I wish it was Taiwanese...
Click to expand...

jung4g said:
I'd love to keep the garage arrangement a bit more fluid, any thoughts on mounting the lathe to a mobile workbench like this: http://www.homedepot.com/p/Husky-60...h-Textured-Black-Matte-HOLC6010BB1M/206842305
It has a claimed load rating of 2,200 lbs, so I'd hope that would work. It wouldn't be easy to move, but doable with two guys if needed. plus I need more room for tools.
Click to expand...

I would not want to rely on the thin steel in a Husky workbench to hold up a metal lathe without some reinforcement.

Biggest challenge with the workbench mount is keeping the lathe level over time. If you move the lathe you should re-level.

The wooden bench seems to have worked for your uncle for a long time. I would try this before getting the Husky.

You can use the Mobil base at worse you may need four leveling bolts which you can loosen to move it and then re level in its new spot. I'm going to make all my machines Mobil .

I was literally just looking at things like that as I remember seeing a used dolly like that at a used machinery store a few weeks back.

Dave, good point on the height. I hadn't thought about that too much. I'm 6' 1", but that's still pretty high, especially if I use heavy stock. I'll probably start with the existing cabinet, maybe just repaint it look ok, and I can build something better down the road if needed.

So I finally moved these home over the weekend. I posted these in another thread about the complete collection of tools I got as well, but I figured this made sense to update as well.

To move the lathe, I bought a heavy duty cart off Amazon. I know it might not look up to the task, but it worked perfectly. I can easily move the lathe by myself with it. 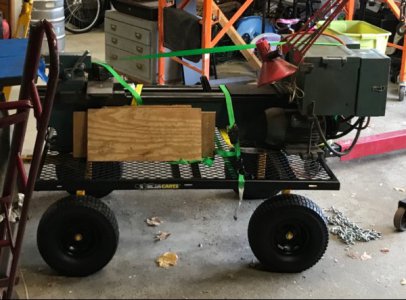 To pick the lathe up, I borrowed a heavy duty engine hoist from the shop my brother-in-law works at. It's a beast of a hoist, and didn't blink at the weight of the lathe. With 3 guys, one running the hoist, one stabilizing the lathe as it's back heavy from the motor, and one moving the old cabinet out and the above cart into play, it went very smoothly.

I used two lifting straps to support the lathe, one wrapped around the casting base under the spindle and snaked up through the ways in the bed and one double wrapped around the bed and noosed up through the ways again. With the tailstock and carriage at the far end of the bed, this was pretty balanced side to side and didn't take too much effort to balance front to back with a guy holding on at the motor. The only thing I removed from the lathe to move it was the chuck. 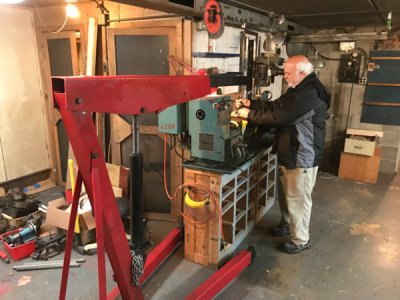 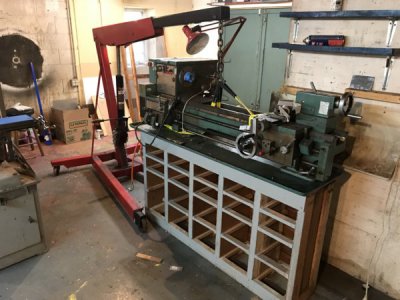 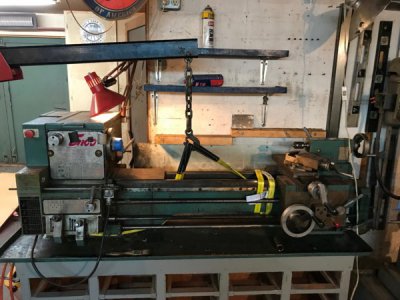 We loaded it into the trailer on the cart and just strapped the whole thing into place, lathe to cart, and the whole thing to the trailer. I had my Clausing 8520 loaded up next to it (except the top motor/spindle assembly) and I put a spare tire between the two to help keep things steady.

Once home, I was actually able to put it on the new toolbox by myself using the "crane" as my 3 year old son called it. I just used a ratchet strap to stabilize the lathe to the hoist arm and set it in place. It'll be bolted down through the wood and metal of the box top, bolts up from the bottom.

Now I know this isn't an ideal box based on the discussions above, but I think I actually the like the height and if needed, will put some leveling feet or just weld up a custom mobile base for this with leveling feet built in to make it more sturdy. If really needed, I'll weld a completely new external frame for the box so the toolbox becomes just storage and not structural. But as of now, it didn't even notice when I set the lathe down on the top. And I did talk to an engineer from where the box was built and he didn't seem to think the weight was of any concern for the top of the box. 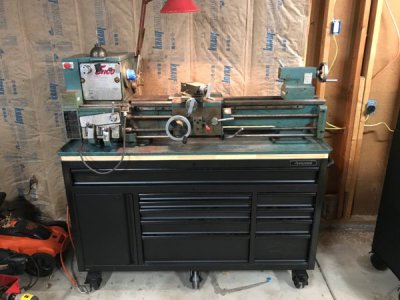 I've cleaned a lot of the old chips, dust, and grease off and oiled things up. Before I fire it up I need to rewire a bit of it as some of it was a little too old for my liking and I need to figure out the oiling system for the spindle housing as it's pretty dry up there.

Getting closer to making some chips!

So I’m digging threw the stuff I got with this, I think I found a manual, or an old carbon copy of one. I’d dismissed it at first as it’s with a bunch of stuff for his old Logan Lathe.

If it helps, I can take pics of various pages, but I don’t think it would scan well enough to have a complete version up. Maybe that’ll be a winter project. 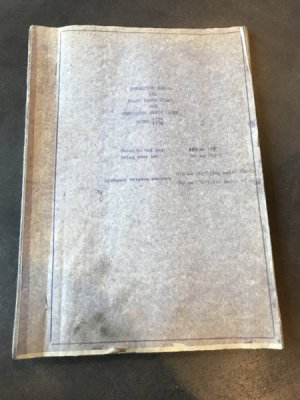 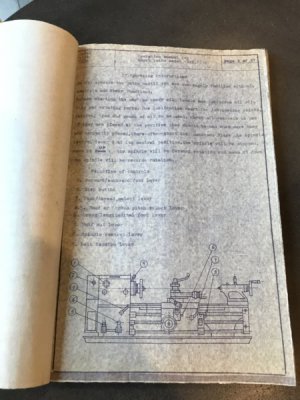 Also, I made a few purchases from Grizzly, hoping parts for the G9249 would be the same, several were not:
-I bought wipers for the carriage, and while similar since the bed is the same, the screw holes on the carriage do not line up, or maybe 1 for each wiper does. I’ll still use them, but that’s not ideal.
-Follow Rest. Since I didn’t get one with, I thought it’d be worth getting one. For $44 complete for the G9249 part, that seemed like a good deal. Unfortunately the carriage is not drilled/tapped for the follow rest so it won’t work. I suppose I could do that, but removing the carriage is complicated, and for what I plan to turn, I think I’ll just return it to Grizzly.
You must log in or register to reply here.
Share:
Facebook Twitter Reddit Pinterest Tumblr WhatsApp Email Link
It can take up to an hour for ads to appear on the page. See our code implementation guide for more details. If you already have Auto ad code on your pages there's no need to replace it with this code
Top
AdBlock Detected