Recently one of the three knobs came right off my drill press quill handle.
It is a plastic knob with a rubber grip coating.
The plastic barrel was cracked and broke out: 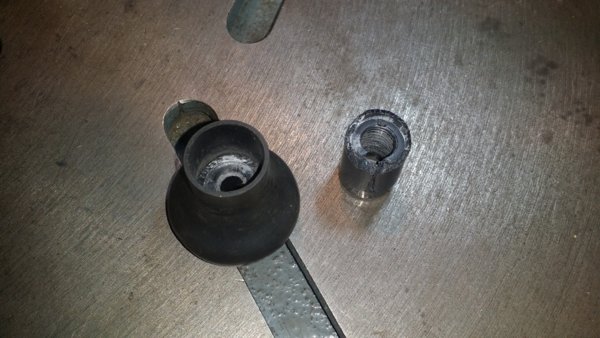 Looking at the other two knobs they are no better: 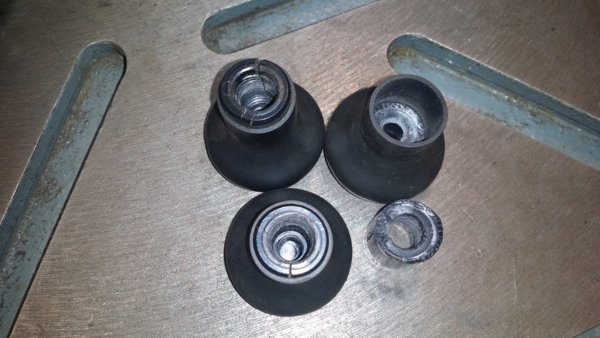 Since the ball-turner for the lathe is still on the long project "to-do" list, and I am just starting to feel almost, slightly comfortable with Fusion-360, I decided to 3D print some new ones.

I drew a flat cross section: 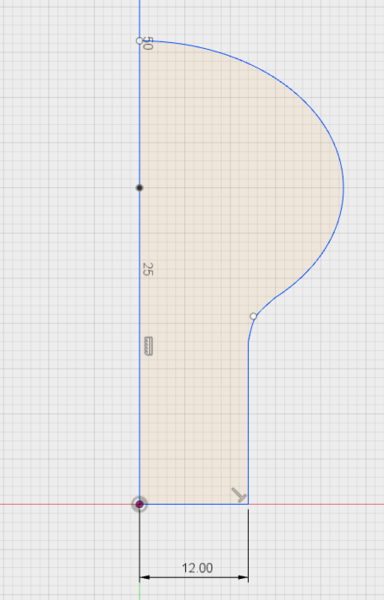 I rotated it about the centre line: 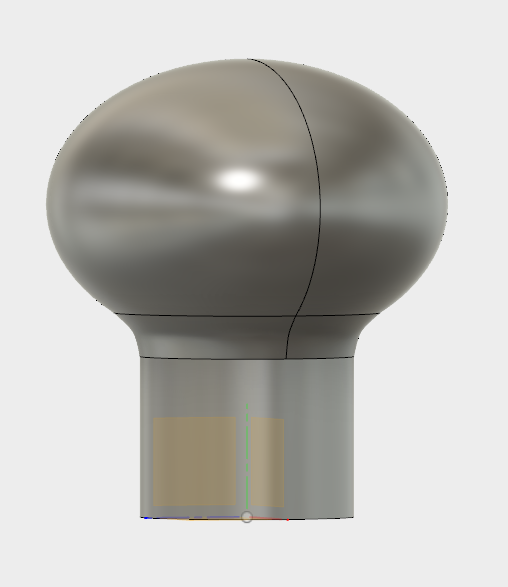 and added a 10mm dia. hole in the bottom: 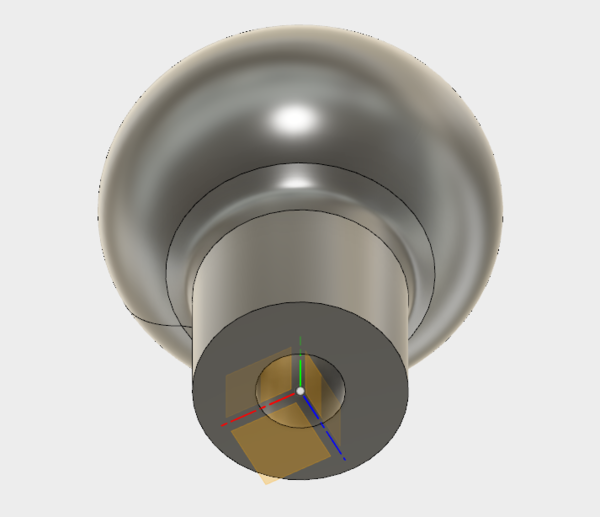 Here it is during printing: 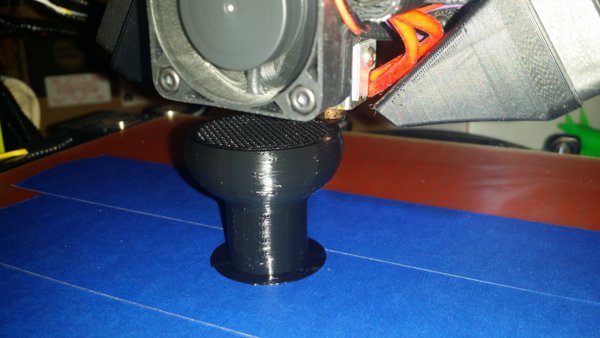 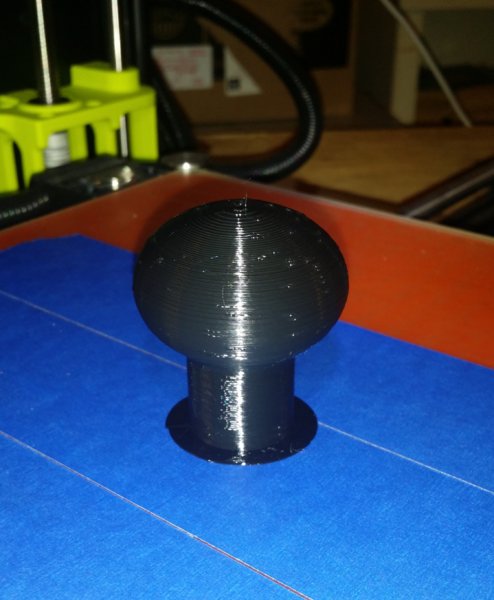 Then I tapped them M12x1.75 and installed them: 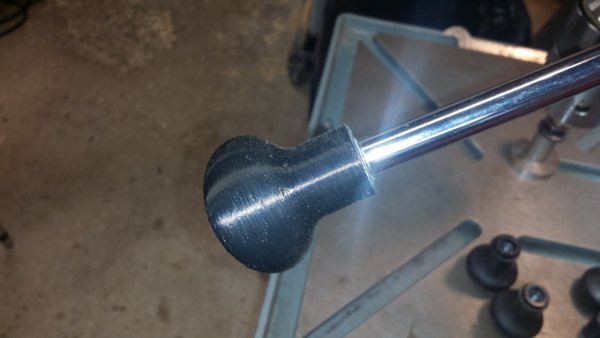 That is sooooooo cool

I have to agree, that is very cool. I can think of many times when I wished I had a 3D printer. Its fun to watch your progress, Brino!

What did you print them in? PLA?
Looks like an improvement over original.
Nice job!!

Yes that was just black PLA. I believe they are much better/stronger than the originals.

I have some ABS and HIPS in stock, but haven't used them yet. With ABS I read you _at least_ want a thermal tent around the printer to reduce draft induced temperature changes. Some people are putting a heater in the tent. Plus I am certai that ABS would be too stinky for the basement where I have it set up now. I'd have to (temporarily) move it out to the shop.

I use the blue "painters" masking tape on the heated bed to help release parts better. There's a bit of a balance between not accidentally letting go of the table during printing (...and the part being dragged around as more molten plastic is spewed out into a "birds nest") and having the part stick too well to the table. In the latter case you need to pry it off with a knife hopefully only leaving marks in the printed object and not the table.

I needed a knob for a jig so I printed one. I found an existing STL file on Thingiverse.

I can see making more knobs in the future. I purchased some PETG filament since it is meant to be almost as strong as ABS but easier to print.

Could you print the threads right into it?

Could I have more details on the printer? I’m thinking of going for it...
T

People make a big deal about ABS, but it isn't THAT bad. A heated bed is enough to get good prints most of the time. Getting some protection from drafts is a good idea though. The smell isn't too bad, though I do prefer to open a window a little when printing it. HIPS is super easy to print, but doesn't hold up as well as ABS and PLA for me. PETG has a lot of nice properties as well.

You can print threads into parts, but they often need a little cleanup. They can be harder to model in the CAD programs, so people will often make the walls thicker and cut the threads in with the bolt/screw. Larger pitch threads tend to work better for me when printing. I suspect it's just the tolerance for errors is higher with bigger features.

wawoodman said:
Could you print the threads right into it?

Could I have more details on the printer? I’m thinking of going for it...
Click to expand...

The threads will likely have sharp crests rather than the rounded crests from a die.

I am having trouble with getting the CAD program to be able to render the threads. I purchased my computer for browsing the internet not for CAD.

I have not tried Fusion360. I have tried OpenSCAD and FreeCAD. I think FreeCAD may be better at the threads but my recent attempt to render a knob with a thread got to something like 996 out of the 1000 counter then crashed. I tried changing Windows priority to give FreeCAD more of the CPU but still crashed at the same point.

I gave up and printed a knob which is designed to have a nut inserted for the thread.

I did a similar design in OpenSCAD and this rendered without any problem.

FreeCAD does fillets a lot easier than OpenSCAD.

wawoodman said:
Could you print the threads right into it?
Click to expand...

Yes. I think.
Fusion-360 should support that, but I've never done it.
What I have seen previously (when trying to make holes that a dowel could be pressed into hand tight) was that the holes turn out a little smaller ID than specified in the model. I would expect the internal threads to act similar. Perhaps a tweak in print parameters (nozzle temp., bed temp., print speed, etc.) could sort that out.


wawoodman said:
Could I have more details on the printer? I’m thinking of going for it...
Click to expand...

Here's my introductory thread on my 3D printer:
https://www.hobby-machinist.com/threads/finally-made-the-jump-to-3d-printing.62834/

This is where I post the info on my specific printer:
https://www.hobby-machinist.com/threads/finally-made-the-jump-to-3d-printing.62834/post-518159

brino,
Just a thought, print the handles with a hole large enough to glue in a threaded sleeve. 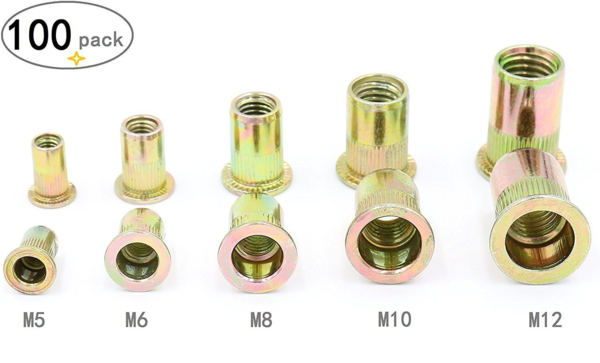 This way it's a bit more reinforced.

Hi Mark,
I know I have seen metal threaded inserts that are meant to be used with 3D printed objects.
The ones I saw used were simply "set" into the plastic with a soldering iron.
I have meant to pick some up to have on have, but have not explored that yet.
-brino

Here's the site I saw:
https://www.matterhackers.com/articles/fasteners-for-3d-printing

They link to McMaster-Carr for the inserts.
They show setting a nut with a soldering iron about 1/2 way down the page.

Very interesting. I have a few threaded inserts for wood, but I had not thought to look for ones for plastic. The McMaster Carr video shows these go in quick and easily. I may have to get some. Another option is a nut and epoxy.

wawoodman said:
Could you print the threads right into it?
Click to expand...

My cheap one had 3 files with it when i got it. One was for a spool holder. Just a hollow pipe threaded on each end and a nut for each end.
Having no idea what the files were when I went about printing one of the files.
Thought the thing was not working right when it started.
It printed threads on each end of the pipe and in the nuts. As it makes the external thread it looks like it is making a mistake.
Pretty coarse threads and loose fitting. Not sure if it would work or be strong enough for the drill press.
C

Nice job Brino! Any luck in trying to a polish/smooth shine on PLA?...Dave

chips&more said:
Any luck in trying to a polish/smooth shine on PLA?
Click to expand...

Actually, Dave I have never tried it.

....but I did have this happen:
To tap the threads, I put the knob in the vise in a rag to avoid jaw marks.
At one point the tap caught and the knob spun and stuck real well to that rag.
Apparently this plastic will flow with heat.....who knew?

Anyhow that one knob has a little "rash" on it....but not worth re-printing.

I suspect any polishing attempt would have to keep the friction heat down.

chips&more said:
Nice job Brino! Any luck in trying to a polish/smooth shine on PLA?...Dave
Click to expand...

I tried on this horseshoe cell phone stand.

The horizontal surface at the bottom was easy to make smoother, it was already almost smooth.

The angled horseshoes were not changed much by wiping with the same acetone wetted paper towel. I expect I could have melted the PLA eventually, but this may not have been what I would consider a "controlled smoothing".

The chambers with acetone atmosphere may work better but I am not sure. "Murphy" seems to have more control than I have. 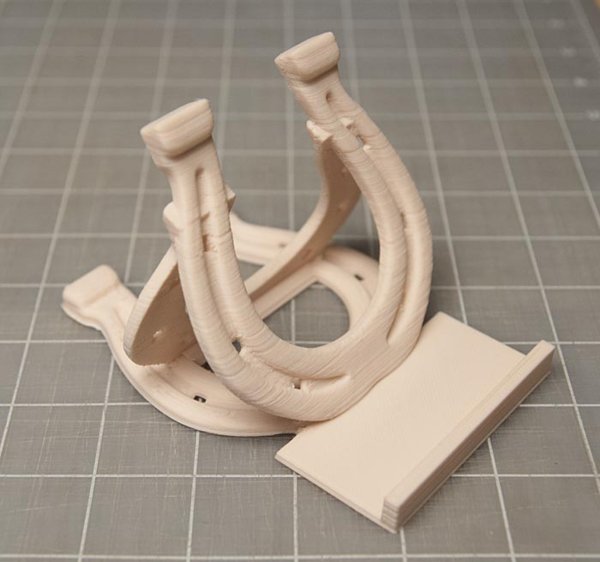 Nice! I grew a knob to replace a missing thumbscrew on a saw guard that's been missing for years. I just designed in a hex cavity the same nominal dimensions as the hex head of the bolt I used. Then heated the bolt with a propane torch and sunk it into the plastic. Worked great. In fact, I grew a half dozen of the knobs since it was a small part. Meanwhile, I was designing a carriage stop to grow for my lathe. Since I had 5 knobs left over, I decided to use them on the screw for the carriage stop also. It's basically the same except the screw is longer. Made a few of them, and I still have a couple of knobs left over, looking for a project.

Even if you can grow accurate threads, it's not worth the effort to model them. It's a significant PITA in most CAD softwares. Heat sinking or tapping is the way to go. I think you would have to chase grown threads anyway to clean them up.

I've been exclusively using ABS. From what I had read previously, I thought it would stink like a burning tire or something. I've found it isn't that bad- if I stick my nose in there and sniff it, it isn't pleasant, but it certainly doesn't stink up the whole house, or even the whole workshop.

I built a plywood enclosure to hold the entire printer. it looks like a rough-built entertainment center. My workshop in the cellar is usually around 50F. I keep the door closed normally to protect the printer from dust, and print with the door open out of concern I could overheat the printer electronics. I've had no issues with ABS printing at all.

@Dave Paine and @ebolton
Thanks for adding your experiences!
-brino

For removing the stink, you could do like I just did for my metal shop. The cutting oil on heavy cuts would really burn up. So I took a bathroom fan, and connected some 4" waste pvc, (outside drain stuff) and attached it together. One end went to the metal shop, the other side to the finishing shop (wood finishing and spray painting). While it's not enough CFM for major removal, I have a heating system blower to really evacuate it. But anyway, i plumbed it to near the window, rather than poke a hole , and with 2 feet of flexible 4" hose attach the plumbing and fan... and exhaust the fumes.
Worth doing, the heavier cfm unit you get the more air change. Just make sure its not so great that you suck the CO from your heater or water heater through.
You must log in or register to reply here.
Share:
Facebook Twitter Reddit Pinterest Tumblr WhatsApp Email Link
It can take up to an hour for ads to appear on the page. See our code implementation guide for more details. If you already have Auto ad code on your pages there's no need to replace it with this code
Top
AdBlock Detected