The next project was to finally build a base for the engine which would also prevent it from falling over and sustaining any damage. The base plate is made from a piece of .50 thick 6061 aluminum 8 x 14 inches long. The front motor mount was lightened by machining holes into it which also gave it a little character. The rear mount bolts to the transmission mounting holes.
gbritnell 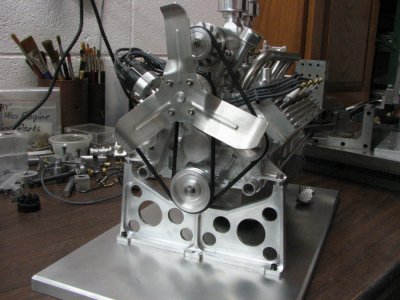 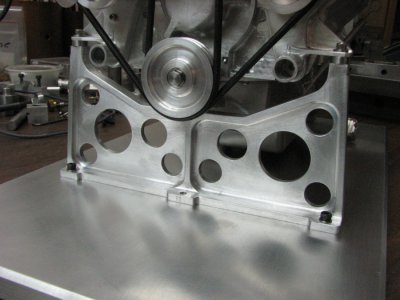 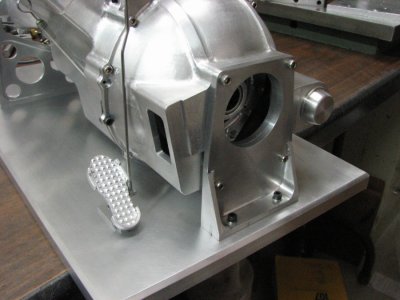 The last big construction item is the radiator. When I built the 302 many years ago I experimented with constructing a radiator but without much success, mostly at that time due to a lack of experience and knowledge. I ended up going to a radiator shop and asking them for some help. When I showed them the engine the owner said that he could get me a piece of core material in just about any size I wanted. I gave him the dimensions I needed and true to his word he supplied me with a miniature radiator with the header plates. All I had to do was make the tanks and solder it together.
Jump ahead 20 years. I took the flathead to the local rad shop, which there aren't many these days, and explained what I needed. He said that something custom made would have to be constructed and he made a call to someone who could do it. It would be a couple of hundred dollars but more to the point I would have no idea what I was going to get so I set about designing and assembling the materials to build my own.
The rad I came up with consists of 64 3/16's brass tubes, 47 .025 fins, two header and side plates and of course the top and bottom tanks. I had a plan of action to assemble all these bits but having never done anything quite like this in the past I wasn't quite sure what I would end up with.
All the fins were machined to size, soldered together and drilled as a block so that all the holes would hopefully line up when it came time to assemble everything. The side plates and headers were machined and drilled and put together with some 2-56 flat head screws at each corner. The corners would be reinforced with solder when I started soldering the whole thing together.
To this point most of the work went fine but with a few minor glitches.
The big adventure would be the soldering. I purchased a bottle of Ruby fluid. This is Zinc Chloride. With the metal warmed up and applied with a brush it cleans the brass and allows the solder to flow into all the crevices.
I started at the bottom header and soldered all the tubes in place. I then worked my way down the fins dabbing solder to them and the tubes then brushing with acid. The job went better than I expected with just a few globs of solder here and there. With these I heated them with the propane torch then gave them a shot of compressed air to blow them clean. When I got finished I had bits of solder sprayed all over my work bench.
Once the core was soldered I meticulously checked the tube joints before soldering on the top and bottom tanks. I didn't want to have to unsolder them to try and fix a leak.
The tanks were buffed before installation so that I would have to try and buff around all the fittings.
Upon completion I made a mount for the rad which mimicked the front engine mount, just to keep things consistent.
With this out of the way I can get back to finishing up the remaining small pieces.
gbritnell 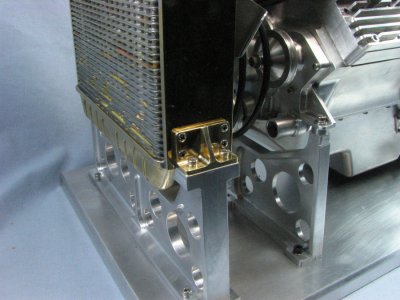 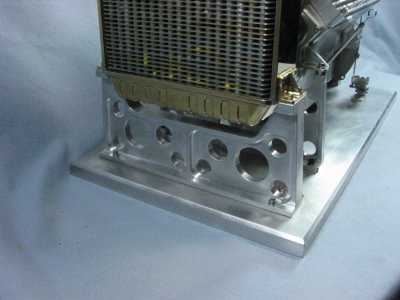 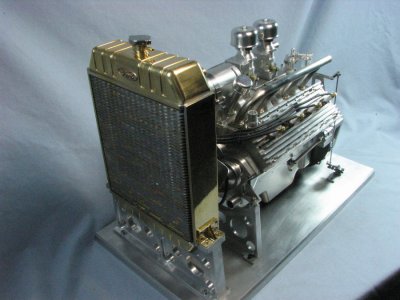 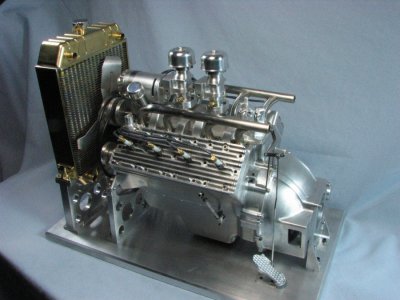 The original plan was to use stainless socket head screws to hold the heads in place as I have been using them on other parts of the engine. While the other screws don't seem to catch your eye too much the ones on the heads just didn't fit the character of the engine so I had to come up with something else. Usually flathead engines with high compression heads have acorn nuts on the studs so I decided to pretty the engine up by going that way. The screws I had were too short to modify so I ordered 50 longer ones. There's 44 head bolts. The new one inch long screws had an unthreaded section just below the head which was perfect for the job. I cut all the heads off the screws and filed three evenly spaced flats on the shanks. I then made up bolt heads from .187 stainless hex stock. These were drilled for a light press fit on the screw shanks. After pressing the all together they were silver soldered in place which is why I filed the flats on the shank so the solder would fill the voids and secure the heads.
I then made a small radius forming tool to shaped the dome on the heads. Each one was cut, sanded and buffed.
There was some concern initially about having to set the heads back up to enlarge each of the pockets around the screw holes to provide socket clearance but after reducing the diameter of the socket wrench it fit fine.
gbritnell 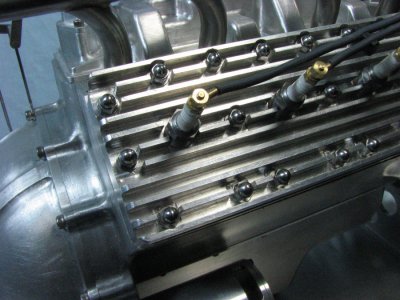 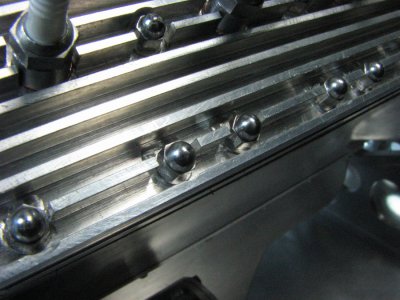 Next up would be the water connection between the engine and radiator. Again going with full sized practice I decided to use stainless tubing bent to the appropriate shape for the upper water tubes. The connections between the engine and rad to the tube was done with short lengths of Neoprene tubing.
With the tubing slipped over the tube ends I measured the O.D. From this measurement I subtracted .010 to make the hose clamps. I turned up 12 stainless rings with a .015 metal wall. Along with the rings I made 12 threaded bushings, 2-56 thread in one half and .094 diameter in the other. The .094 would give enough room for the clamp to flex when tightened without binding the clamp. Each clamp was silver soldered together then after cleanup they were clamped into the mill vise and split open with a .040 slitting saw.
gbritnell 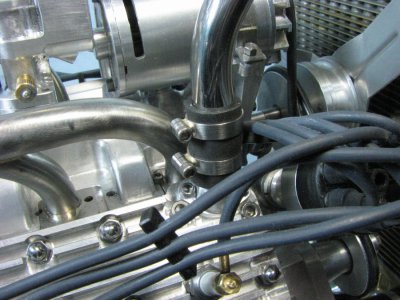 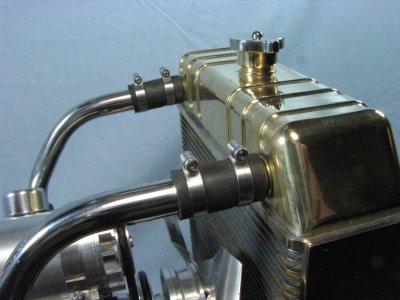 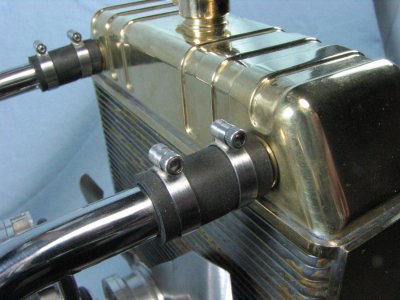 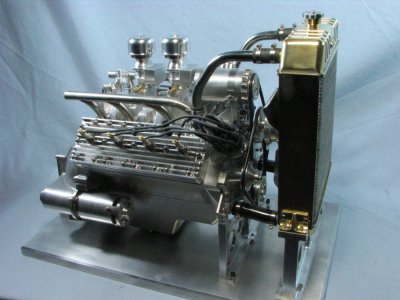 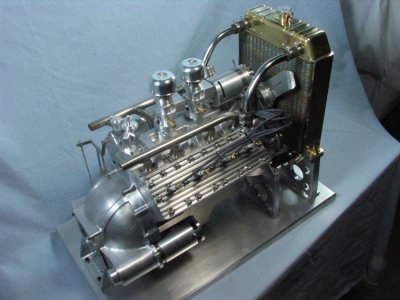 Now it's on to the final bits and pieces before the first startup test in the next week or so.
gbritnell
M

Times 2! Just an amazing project.
You must log in or register to reply here.
Share:
Facebook Twitter Reddit Pinterest Tumblr WhatsApp Email Link
It can take up to an hour for ads to appear on the page. See our code implementation guide for more details. If you already have Auto ad code on your pages there's no need to replace it with this code
Top
AdBlock Detected