As long as it is safely done there should be no issues with it. Many machines have their controls located in free standing enclosures. Enclose the wiring in protective conduit, proper connectors, no sharp edges, NEMA enclosure, etc. Make a wiring diagram kept with it. If you are unsure of anything get some one's help that is knowledgeable. Not every electrician is!
B

Putting everything on the wall or on the end of the lathe should be possible, acceptable and probably preferred. However, where ever you put it shorter cables are always preferred. Most folks put both the control electronics and the VFD in the same box so that the wires to and from the VFD and control electronics do not have to run around the room. In this manner you would have power from the breaker to the VFD in the enclosure and then going to the motor directly from the enclosure. While signal wires coming from and to the lathe would travel to the external box via a separate path. Never, put the signal wires in the same conduit that you put the power through.

So you currently have both power and control wires running back and forth between two boxes and this is not the best approach, anyway. In my many years of electronics, once safety is ensured, my guiding rule is for wires to be as short as possible to avoid interference with low level signal wires and not to physically over lap (parallel nor crossing, but shielding can help here) the wires with the noise generating wires (power wires mostly). If they have to be run along side each other, then keep them as separate as possible. Shielding on the signal wires is usually required, so multiple metal conduits would help. Safety WRT the power wires may mean that you have to put them in a conduit, or at lease have them in a very well insulated cable. I used a rubber cable to bring power to my enclosure, which is at the back of my PM1440GT.

I put my lathe on casters just so I could roll it out if absolutely needed. I then built my VFD conversion, got it working, and then rolled the lathe into position close to the wall. Then I used the lathe feet to lift the lathe off of the casters and to level it. It turns out that I have had to get into the back of the lathe (the enclosure) to work on things a couple of times and I have been able to do this without moving the lathe, but it is cramped, but since I used plug-in style connectors for most of the controls I could just unplug the wires, then pull the circuit board from the DIN rails and have the electronics to work on elsewhere. If I had to do major work I would roll the lathe out. Leveling it did not take that long. So I have a flexible, well, insulate heavy gauge rubber (big) power cable coming from my wall switch to the lathe. It is long enough to allow me to roll the lathe several feet from the wall and still be hooked up to power. All the other power wires are internal, but run only short distances.
If you look at photo 8a of my VFD posting you will see the end of the yellow rubber cable going into the lathe.

Christianstark said:
I am really considering removing the box, and mounting it on the wall next to my VFD enclosure for convenience.Is there any downside to this?

@mksj @davidpbest adding you gents for your wealth of experience here.
Click to expand...

I see no problem with this provided the cabling is long enough and routed/secured to stay off of moving parts. On my 1340, the electrical box was screwed to the headstock with M6 screws and the holes in the headstock were drilled/tapped through the casting. If yours are tapped through, you will need to plug and seal those holes otherwise you will have oil leaking out the back.

I decided to just clean up my wiring. Spend a bit more time with it, and leave as is for now. If I do ever need to get into the back of the wiring box mounted on the lathe, I believe at that time I will likely re-do it in an external box...or get with Mark on a control system.

My VFD box will be mounted above the conduit, and to the left of the lathe. Wall is in this photo. This puts everything pretty close. 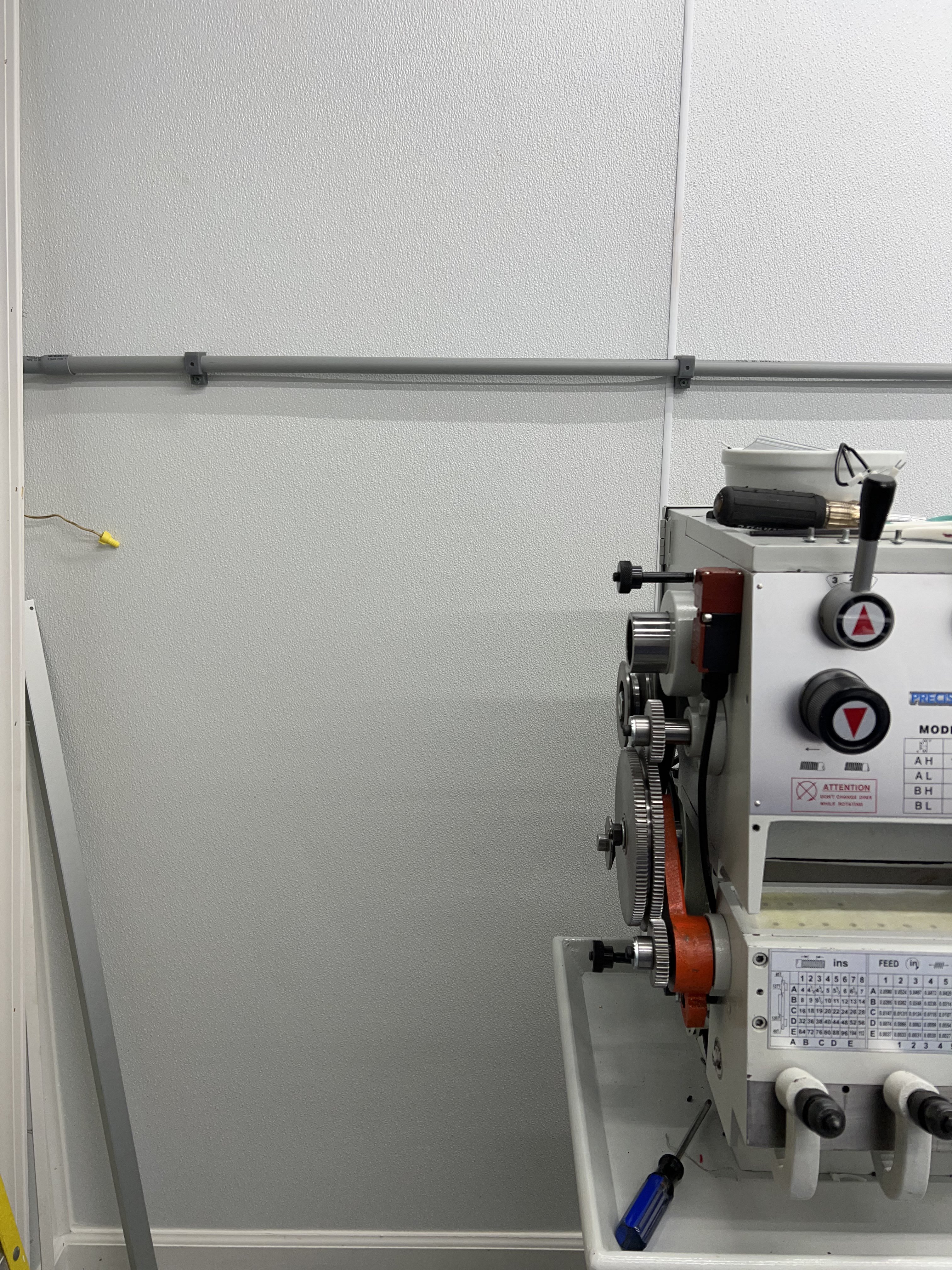 The motor cable, and 220V power to lathe electrical box is 12AWG Shielded 4 conductor of the same brand. 220V hardwire to the VFD Enclosure is 10AWG THHN in conduit.

That will all work well, when using shielded cable, the control cable/speed pot. cable shield is only grounded at the VFD end, motor cable shield is grounded at both ends, as well as the cable ground wire (if it has a separate green ground wire). Typically once everything is up and running, there should be no need to get into either machine control cabinet or VFD cabinet. The Hitachi WJ200 has been very reliable in my experience, only faults I have seen has been attempting too fast a stops w/o a braking resistor, and an occasion where the new motor had a short and the VFD went directly into a fault mode when starting. The Teco and Yaskawa VFD's have also worked well and have been reliable.

1340GT - Wiring is going well. Much cleaner the second time around. Should have the lathe side wrapped by this afternoon, and will begin the VFD side.

833TV - Called today for an update. The 4 jaw chucks expected last week are still not in, so my whole order is on hold waiting for them. They just need to toss that in, and crate it up for shipping. For those waiting on an 833TV, I was informed that several are going out today.

Front side controls! Will need to fabricate a bracket for the pot, and I always planned on making a knob once the lathe is up and running. 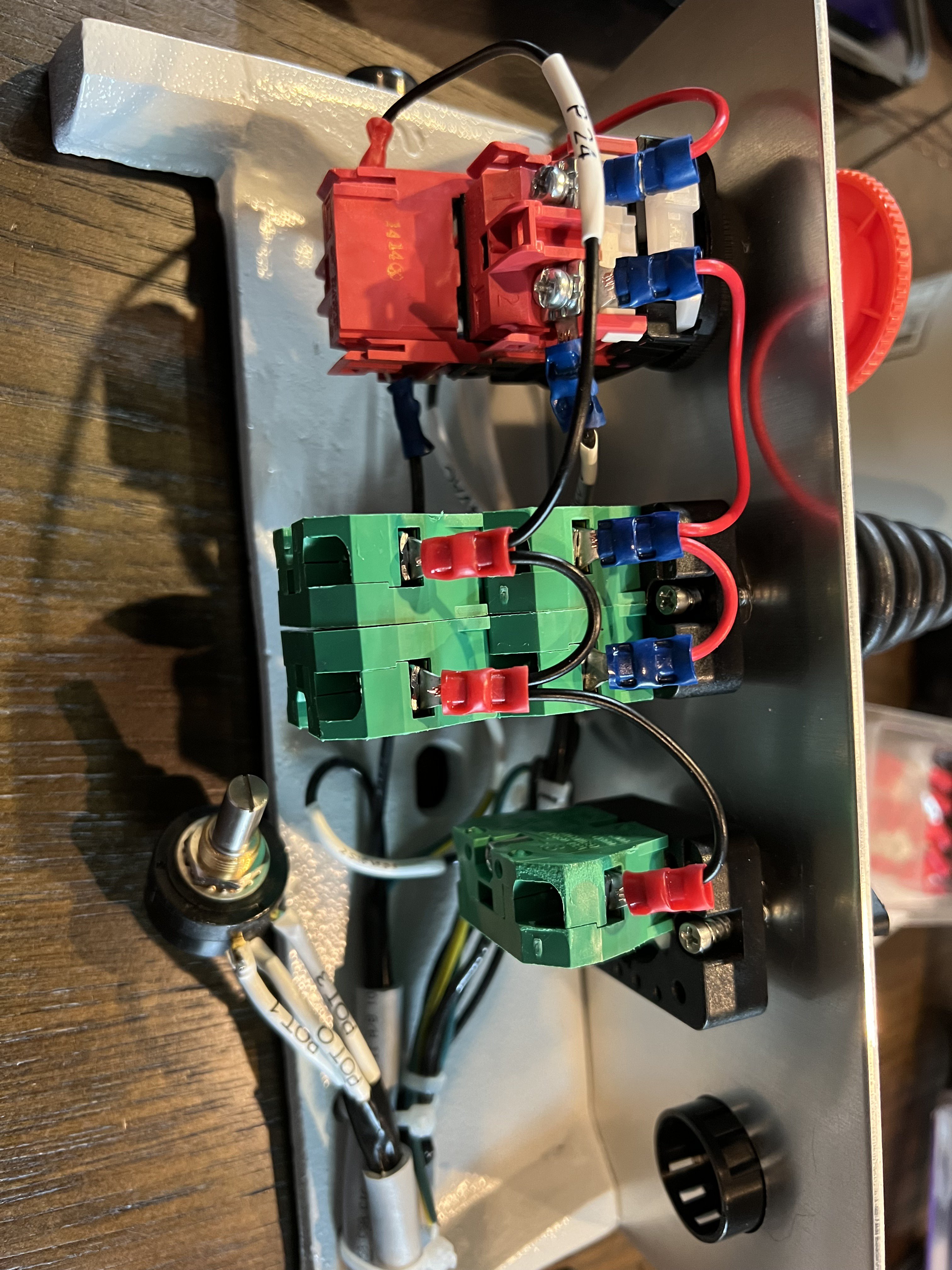 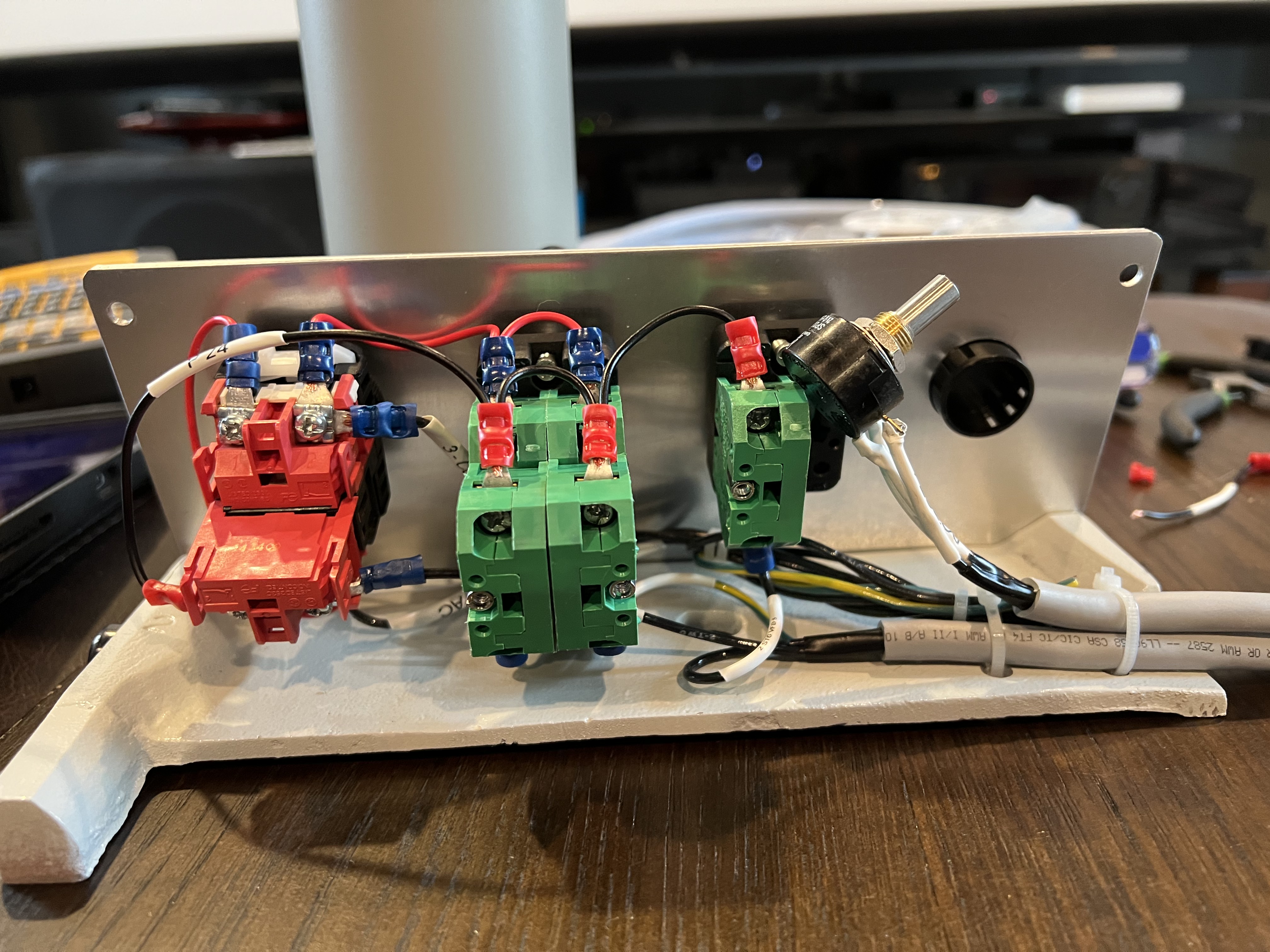 UPDATE - So I hung the VFD enclosure, and I ran 10AWG THHN via conduit to eat box. I terminated the ends of the wiring on both sides with ferrules, and hooked everything up. VFD side directly to the master power switch, and the power panel with a 30A 220V breaker. I finally have power to the VFD. Now I need to run: Controls, Motor, Power, and Potentiometer. 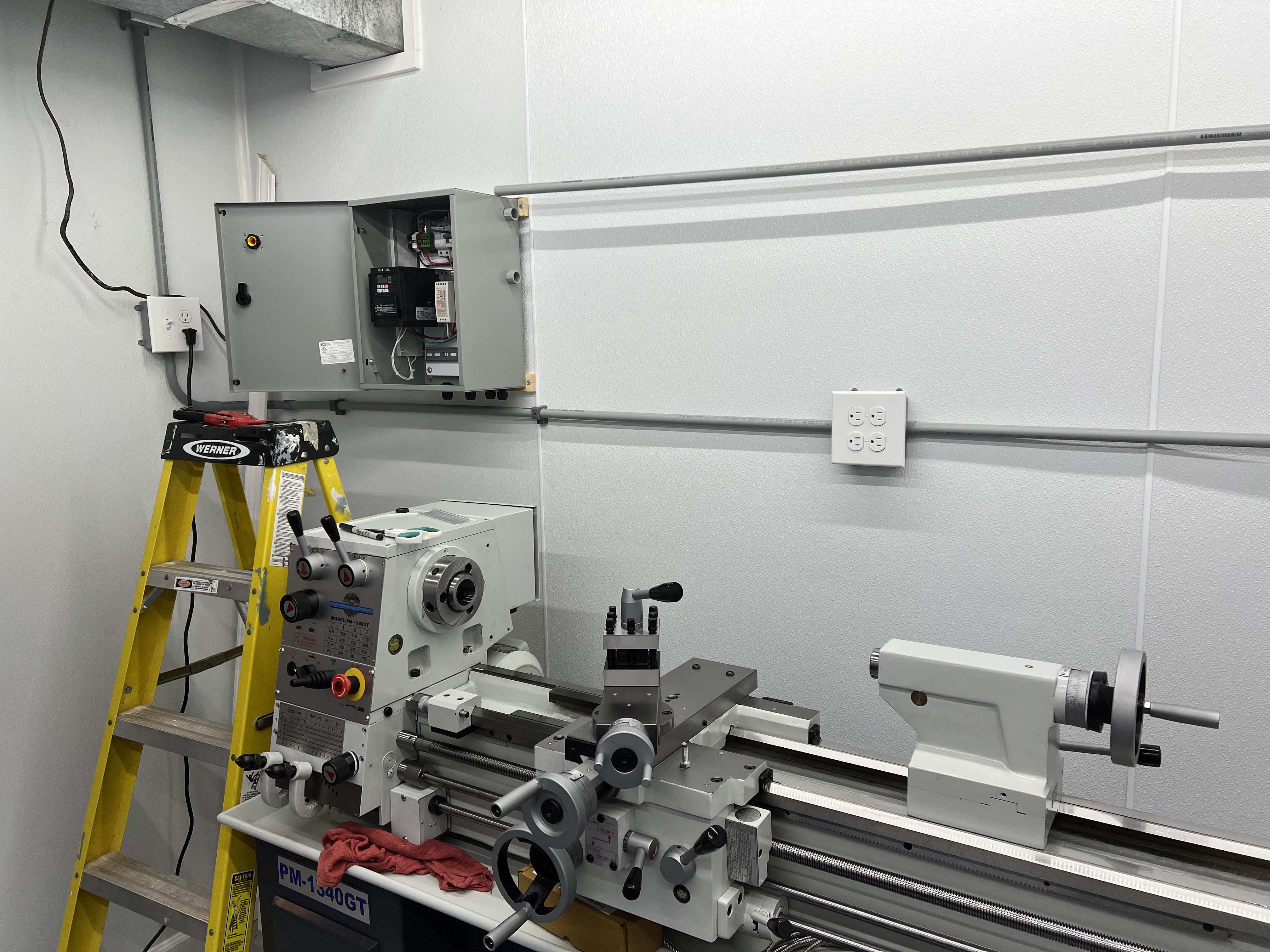 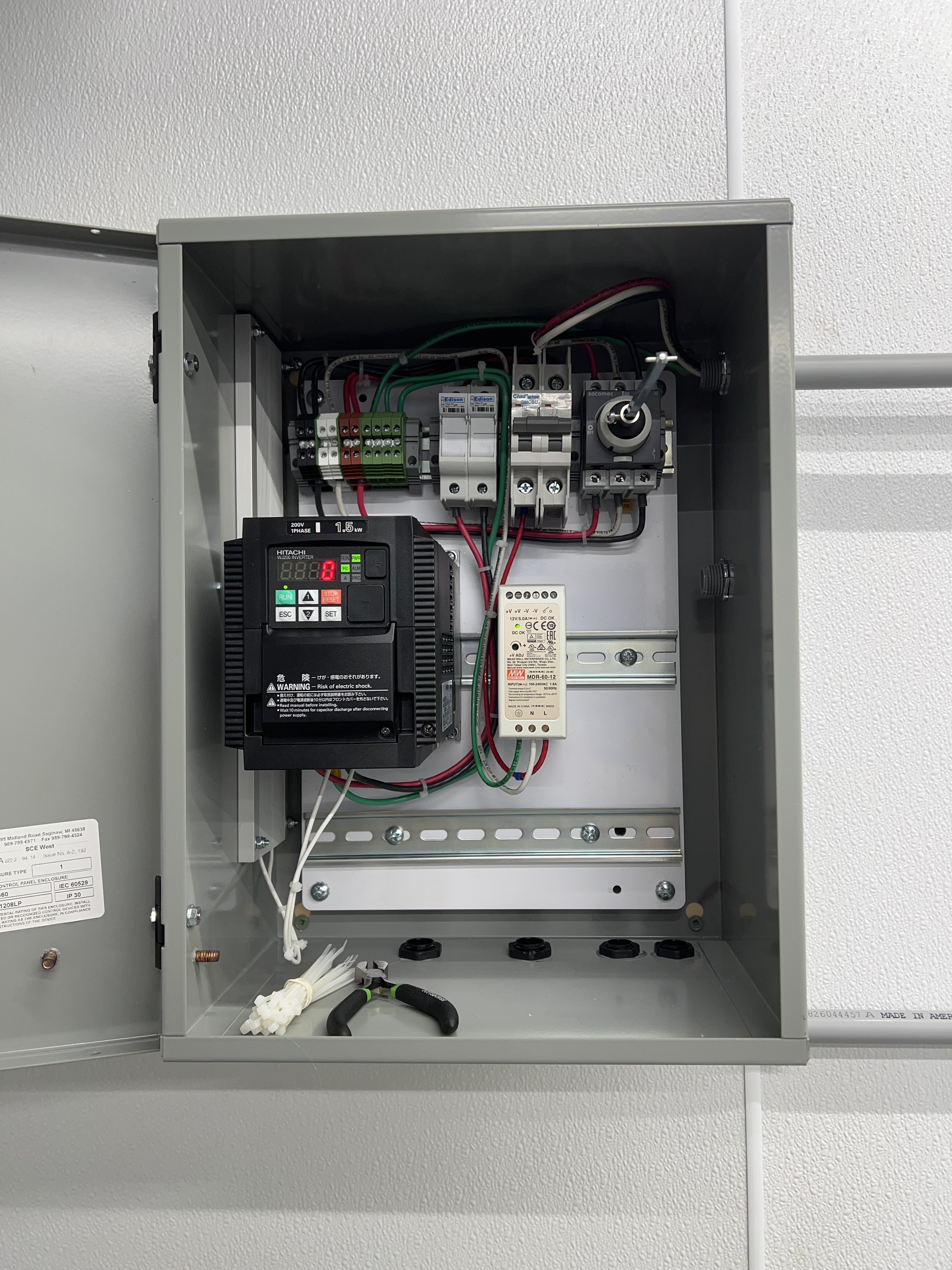 The install will look nice.

That wall enclosure looks plenty big to put everything I used in my 1440GT conversion. I got mine into the original stand cabinet after I got rid of the big transformer and the big relays .... They are not really needed if you replace the latching relay with a couple of very small transistors. Anyway, it would be nice to get everything within easy reach!

Dave
You must log in or register to reply here.
Share:
Facebook Twitter Reddit Pinterest Tumblr WhatsApp Email Share Link
It can take up to an hour for ads to appear on the page. See our code implementation guide for more details. If you already have Auto ad code on your pages there's no need to replace it with this code
Top
AdBlock Detected