I'm a new forum member here with my first post; I have owned an Atlas/Craftsman 101.07382 12" lathe with Timken bearings and multiple accessories for many years. I have used it very little over the years and not at all in the last 20 or so, and it probably should just be considered as having been in clean and dry storage. I didn't make it past the basic beginner (is that redundant?) stage before I got sidetracked onto other things. Now I want to use it for some projects and it is time to get it going again. My current projects don't require a lot of precision so a little slop here and there isn't a big deal; my lack of skill is the limiting factor. Of course I would like the lathe to be as good as it can be and learning/improving skills is high on the list of things to do.

Now my questions: how available are replacement Timken bearings, and at what point do people consider replacing them? Is bearing replacement a painful operation or pretty straightforward? How about realignment afterwards? I admit I have not done much searching on the subject so links would be appreciated if anyone knows of reliable reference sources.

I'm in no hurry, but it wouldn't hurt to keep this in the back of my mind as I reacquaint myself with the lathe.

It's doubtful that it needs anything but a shot of oil or maybe an adjustment; fire it up and try it out ---

the timken bearings are getting harder to find, but still available.
make sure they are bad before ordering another set.

i was a complete moron and fixed mine, except they (the bearings) didn't need to be fixed

it was a painful game of attrition, to disassemble the headsotck replace the bearings.
i was successful in the end, but i broke a pulley getting it apart - the NOS pulley cost waaay more than i wanted to spend.

do yourself a favor,
spare yourself any dreams of pulling the headstock apart.
use the lathe,
and if it fails to operate properly, that's your cue to move on to another machine

Those Timkens last practically forever- don't risk damaging anything trying to change them. Spend the money on a nice QCTP instead
or some other tools
Mark
W

Thanks for the insight, folks. I'll take it slow and easy and get a good feel for how it is doing. There is no doubt I am the limiting factor so no need to hurry. I have plenty to learn just the way it is.

As said above, it is unlikely that the spindle bearings need replacing. Unless they were run without oil for a while. But changing them is no big deal and certainly not worth scrapping the lathe to avoid doing. You just need to be able to make the proper puller components before you disassemble it.

For the record, the Timken bearing headstock is not original to the machine. All of the Atlas-Craftsman 12" lathes with Model Numbers between 101.07360 and 101.07383 originally came with babbit bearing headstocks. So the headstock is probably newer than the rest of the lathe. The 101.07382 was in production for only only about one year, 1938. And if the headstock has a rectangular instead of oval escutcheon for mounting the motor switch, it was made 1942 or later.
W

wa5cab said:
For the record, the Timken bearing headstock is not original to the machine. All of the Atlas-Craftsman 12" lathes with Model Numbers between 101.07360 and 101.07383 originally came with babbit bearing headstocks. So the headstock is probably newer than the rest of the lathe. The 101.07382 was in production for only only about one year, 1938. And if the headstock has a rectangular instead of oval escutcheon for mounting the motor switch, it was made 1942 or later.
Click to expand...

Thank You! That was very helpful and explains why a few things have been confusing and I have had a hard time matching diagrams to the model number. The escutcheon is rectangular as seen in one of the attached photos. The oil cups don't have the felt mentioned in other threads; the attached photo doesn't show it very well because of the flash, but the bottom of the cup is not flat but is tapered to the hole. Also, the photo of the headstock showing the escutcheon also shows the hidden oil hole plug mentioned in the sticky "Lubrication Tip-spindle/back Gear Damage Warning For New Atlas Or Atlas/Craftsman Owners" post. It is in the first open pulley to the left and in my case is a slotted screw.

Question about the oil cups: are these the type that take felt inserts? If so, are they just small diameter plugs that fit into the hole at the center of the cup?

The history of the lathe: back in the late 1960s a friend who is a few years older than me and is a mechanical engineer was mentoring me in high performance automobiles. We were both single at the time and had set up a personal use (non-commercial) shop and had been accumulating as much equipment as we could scrape together. He had been to a machine shop discussing some work we wanted done, and came back and told me they had a small lathe for sale at a good price. It had been installed in a corner of the shop and used for little one-off projects and they wanted it out of their way. It came with a lot of the accessories and he thought it would be a good thing for us to pick up. I took his word for it and agreed to split the price with him. A couple years later I moved out of state and we divided up the toys when I left; the lathe stayed with him. A few years after that, he moved out of state and ended up near me again. He obtained a larger lathe and asked if I wanted to buy this one back, so I did. Not long after that things got weird (I got married) and priorities changed. After my late father-in-law retired I thought he might enjoy using it since he had been a machinist in the Navy in the early 1950s. He set it up in his shop, got it all adjusted, covered it with a tarp and happily went back to his woodworking hobby. A few years ago I retired and the lathe moved up here when my wife and I did. And now I want to use it for some projects, so after having custody of it for almost 40 years it's probably time to learn how to operate it.

Anyway, thank you very much for the information, this has been very helpful
Wally 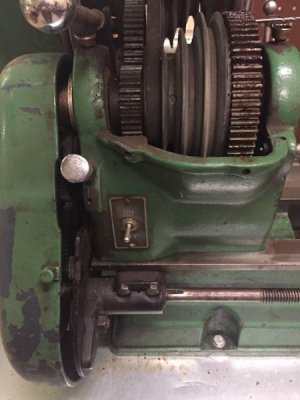 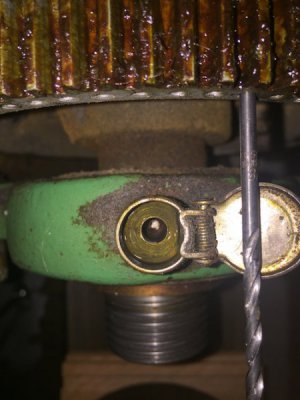 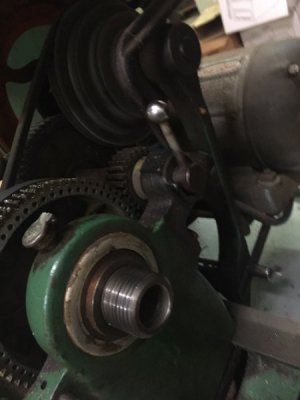 The felt plugs were added sometime between 1966 and 1975 and are considered retroactive. Meaning that if your machine doesn't have them, add them. My 12" bought new in 1981 has an Allen set screw for an oil plug. Too many years have passed since then so I don't recall whether that's the way that it came or I changed it. But I would recommend changing yours as the Allen wrench will keep the screw on it, especially if you lightly magnetize the tip. And reduce the chance of dropping it into the headstock. It should be the ball nose type.

To answer your two questions about the felt, yes and no. Yes, your oilers are the same type as later came with the felt plug. The same part was used from 1932 to 1981. And No, the felt plug doesn't go down in the small diameter hole. The diameter of the low density felt plug is the same as the ID of the top of the oiler. The thickness is such that the top of the felt will be flush with the top of the oiler. If you are ordering something else from Clausing, buy two of the plugs, part # 557-097 or 557-047. The parts list gives the former, but when the ones that I ordered arrived, the invoice said the latter. You can buy the low density felt from places like Hobby Lobby, but you'll have to buy enough to make a hundred. And by the time that you need to make another one, you probably won't be able to locate the remaining felt.
W

Can parts from Clausing be ordered on-line? So far, site searches at https://www.clausing-industrial.com don't turn up anything. Or do they have a different website for legacy products?

In general, I haven't heard of anyone having much luck trying to contact Clausing anyway other than by telephone. You don't appear to live in California so call 1-800-323-0972. Tell whomever answers that you want Old Atlas Parts. They are in EST and close at 17:00. Which is about 20 minutes from now. So probably have to wait until Monday. They take credit cards. I don't know about PayPal, but probably only accept the PP business CC. And although I've never done it, they probably accept mail orders with a Money Order.
You must log in or register to reply here.
Share:
Facebook Twitter Reddit Pinterest Tumblr WhatsApp Email Link
It can take up to an hour for ads to appear on the page. See our code implementation guide for more details. If you already have Auto ad code on your pages there's no need to replace it with this code
Top
AdBlock Detected