I'm looking to purchase a dividing head for my PM-25 mill. The smallest common size is BS-0. Is this too big for the PM-25 mill?

Assuming this size is okay, which brand should I get?

I see many listed on eBay for under $300 including shipping. Are they decent?

Then, there is the PM one for over $400 with shipping. I suspect this is a step up from the eBay ones.

Lastly, the Grizzly dividing head is over $500 without the chuck and without shipping.

I'd rather not deal with used since most seem to be missing parts and are of unknown condition.

Too Big is going to be defined by two things you can measure and determine.

1. Is the distance across the face of it too wide to bolt to your mill table. (will the securing bolt holes hang OFF the front and back of the table).
2. Is it so tall that you lose too much "Z" distance to work your desired pieces.

You should be able to look up, or infer those two critical dimensions.

So, I guess the size is okay. What brand to get? It looks like all of them improve with disassembly, cleaning, and re-oiling/re-greasing based on the YouTube videos I've watched. So, is it worth getting a Grizzly or PM versus a cheap eBay one? Are they any better?

I have a BS-0 on my PM25. Started out with an eBay BS-0. Suspect it would have been mostly ok, had it not been dropped. But it had been dropped. The eBay BS-0 was rough, but functional. By rough, I mean literally. Sharp edges, filled with grit, and all of the engraved lines literally would cut you, should you touch it. The packing in the box did not prevent load shift - most likely leading to the dropping. I had to disassemble the unit to find the latent damage. In my case, the bearing casting had cracked. The bearing casting is N/A. After much time and persistence, I was able to return it and get my money back.

Then turned around and bought the BS-0 from PM. Packing was impeccable, the styrofoam actually fit the contents. Was double boxed to further prevent shipping damage. The unit was better finished and smoother turning. The scribed lines were tolerable, although they could use a light stoning. The PM BS-0 was so much better that I have not bothered to do a teardown. It doesn't need it right now. Yes, it was more expensive, but I have no regrets. The runout on the mounted 3 jaw is surprisingly good at 0.001".

That's my story. I suspect the eBay cheap ones are the ones that failed QC. If I were to do it again, I'd go with the PM one.

Only mounted the BS-0 along the x axis. Don't know if it will bolt to the y, might be too long. I can check if you think that's important. Picture of BS-0 on table with 4" vise. Axis is slightly over the vise, but not too high. 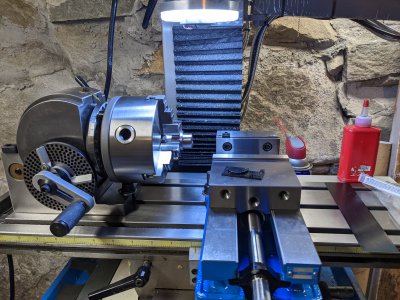 In all fairness, I think an eBay BS-0, if not damaged or mishandled in shipping, can be made to work. More elbow grease, so to speak, but workable. Had it not been for the broken bearing casting, I would have kept the first unit. Have to agree, for the money, (even what PM charges) they are an amazing value.

I decided to cry once and go with the PM. I'd rather not disassemble an eBay one as soon as I get it to clean it.

They claim it to be in stock, so I'm hoping it ships next week.

Thanks for everyone's input!!!

The Eagle has landed!

I received my PM BS-0 Dividing Head last night. I'm taking a closer look this morning. Overall, I'm very happy. VERY well packed in double boxes with fitted foam in the inner box. Entire head and all accessories are coated in a light oil. Smooth turning with the handle. I do feel a slight amount of backlash which I think I can eliminate.

Of course, I have nothing to compare this to since I've never owned one before. When I use this in the next few days, I'll report back! 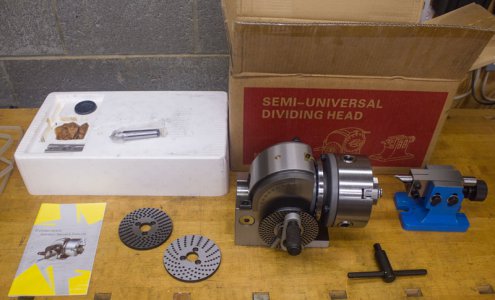 devils4ever,
I must admit I am a bit jealous of your new toy. Enjoy!

I've been trying for six months to find a use for that rascal. No joy yet.

I'll bet if I had one I'd use it for something....
We'll see.
You must log in or register to reply here.
Share:
Facebook Twitter Reddit Pinterest Tumblr WhatsApp Email Share Link
It can take up to an hour for ads to appear on the page. See our code implementation guide for more details. If you already have Auto ad code on your pages there's no need to replace it with this code
Top
AdBlock Detected