@ttabbal thanks, that’s the kind of headache stuff I really appreciate to know out the gate!

So I soldered up the boards, uploaded the software/flashed the Launchpad and success! Well, at least that part is up. I have Encoder, Hybrid Servo/stepper, pulleys and driver en route. I need to figure out a cable from Display to launch board, but that connects to some aviation connectors and I don't know who/what/where on that cable. I will need to order belts (I think one is 147/149 teeth the encoder one I have no idea). Where the heck I'm mounting the driver/launch board/power supply...I don't know. I already have a big electronics box on the wall from VFD, don't want another one. Gotta make mounting assembly for Encoder and servo. Where did you guys mount? I really want it "under the hood" if possible. I know Clough discussed it, but I don't know if that ever happened. Since the launch board it reading "clough" at startup, it really should be a situation of hooking everything up now as we have the same lathe/encoder/servo/driver, therefore same settings in the code.
T

You can see pics of how I mounted things in my thread. The encoder is on a little adapter replacing the gear sets. The servo is on a bracket mounted to the headstock case. I ended up just cutting a hole in the cover to stick the motor through. I would have liked to mount it in a way to avoid that, but didn't find a good spot on my lathe. I know some lathes have spaces you can fit the motor, so it just depends on you machine.

I used network cable and the aviation connectors, just solder the wires into the right spots.

Clough has a video about building the enclosure box. I did something similar for mine.

I went to his thingsverse page....there are only 2 files, one is lid.stl which when I open are just the cut outs...the other is lid.step file which none of my software recognizes so I have no idea whats in it. Being I have no CNC I guess it isn't of value anyway. Looking at a $2000 StepCraft router just for this purpose, hopefully I can find the file before I get the CNC. Would you happen to know if it was an STL file or STEP file? I really don't know the diff at this point. I think I will try to mount stepper just above motor as he SAID he was going to try to do, I'll have to check to see if he updated...
T

I know there was more than that there before... 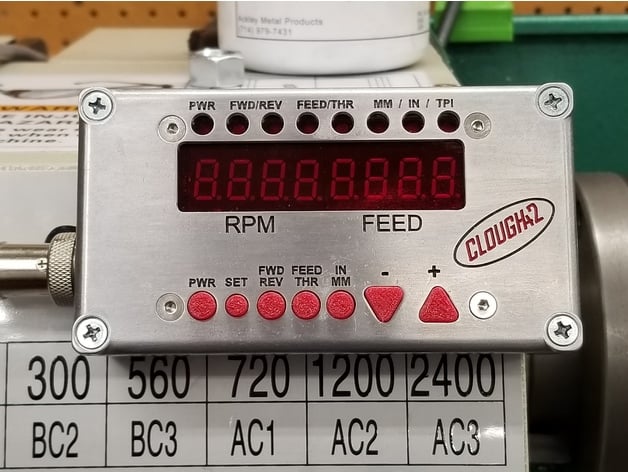 I am developing an electronic leadscrew for my lathe, which is a device that replaces the change gears with an electronic controller and a motor. This project is a repository of the brackets, pulleys, control panel parts and reference models used in the prototypes and final design. See the...

To answer about the formats, STL is a mesh object usually used for 3D printers. STEP is a CAD format, more for making changes to the design.

When I made the control box, I used the STEP, imported into Fusion360, and added the lettering and such. The lids are not particularly flat, so they ended up a little off, the depth of the lettering is not consistent. People have made them by 3d printing the lid, cnc, and things like the PCB method. I'm not sure if he released the layout files for the PCB.

Another option might be to use laser cut acrylic for the lid. Or using one with marking spray on the aluminum.

He’s up to video 6, where he’s been doing test cuts with the prototype.
Click to expand...

The button board and display panel just sold out (100) on Ebay.

Pretty amazing. 15 minutes to sell 100 boards. It speaks to the popularity of this project.
W

I am anxious to be the 1000'th installation on a Takisawa lathe. I am not really an early adopter, I suppose.
J

Dang, I missed it hopefully he will produce more.


Sent from my iPhone using Tapatalk
You must log in or register to reply here.
Share:
Facebook Twitter Reddit Pinterest Tumblr WhatsApp Email Share Link
It can take up to an hour for ads to appear on the page. See our code implementation guide for more details. If you already have Auto ad code on your pages there's no need to replace it with this code
Top
AdBlock Detected