Every time I've needed to use my HF engine hoist, the support feet weren't wide enough for the task. I decided to make new support feet that would be wide enough to fit around the stands I have my equipment on. 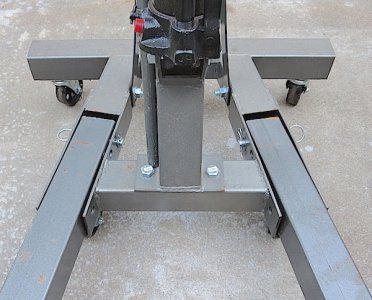 First the plan. I decided on Z legs that would provide a little more then 32" clearance between them.
For the center of the Z, I opted for schedule 40 2.5" pipe with 3/6" wall. I thought the round tube would be less prone to torque than square tube, though a bit more work.
The wheels of the arms will line up pretty close to the original wheel position, as shown with the dotted lines. I was concerned they might want to twist with a load on them. Since they line up, I don't think that will be a problem. If it is, I'll run something across them through the tube. It will have to be removable, as they won't fold up with it in place.
The rest is made with the stock tubing. 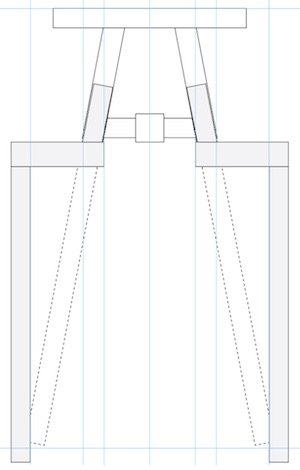 First, I marked the cuts on the stock tubing. I used a ruler with the legs mounted.
This pic was posed after the fact. I wedged the legs in the slot to keep them parallel to the angle. 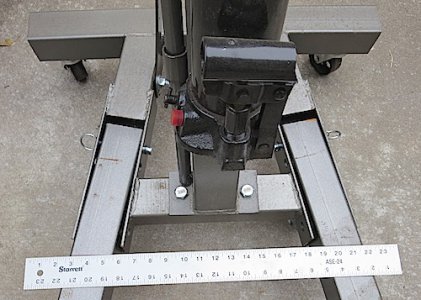 With the legs marked, I made some wooden wedges to hold them in the correct angle in my horizontal band saw. I didn't want to turn the clamp because it is a pain to get it perfectly square again. 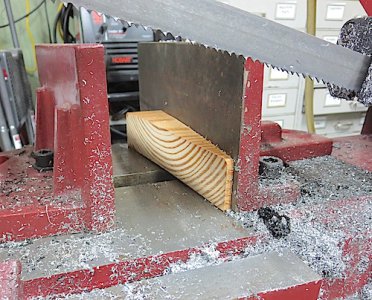 To mark the birds mouth notches in the square tube, I cut a 1" section of the pipe for a guide and clamped a straight edge to draw the cutouts for the 8 cuts. 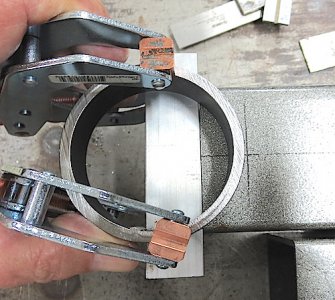 I'll cut birds mouths with my plasma torch. I measured the distance from the edge of the nozzle (3/16") and cut some circles 3/16" larger than the tube in 1/2" MDF for torch guides. That thickness guide holds my nozzle about 1/16" up from the cut, which is perfect. Two circles made 4 guides, in case I burned some up. 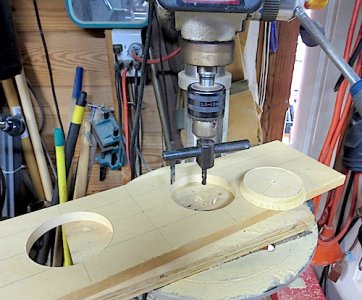 After cutting them in half, making guide lines and marking the pieces, I clamped them up for cutting. 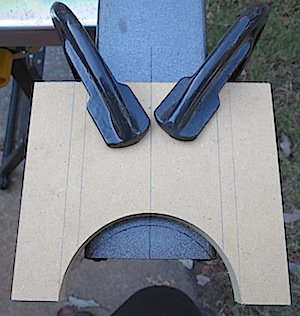 I clamped two pieces at a time for cutting the birds mouths.
None of my guides burned up. A little dross and some paint to grind off. 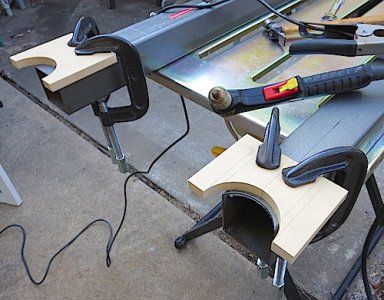 After all the notches were cut, I layed everything out to check to see if they would work.
Everything looks good. Ready to weld! 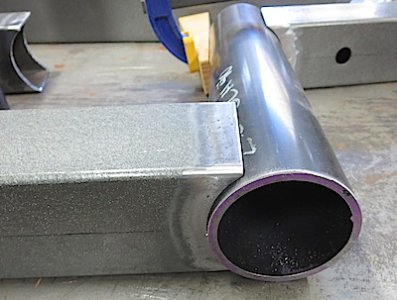 Never thought of using MDF for a torch guide. Looks like it held up very well!

Nice work Franko. I will keep this in mind for my lift. I have been pondering a design that would allow for adjusting the legs. I was thinking about a protractor type arrangement with a pin to lock the leg in place.

JimDawson said:
Never thought of using MDF for a torch guide. Looks like it held up very well!

Oh yeah, it works great, Jim. I've made all kinds of torch guides with MDF and 1/2 plywood, from straight edges to small circles for neat holes to run conduit on my utility trailer, and big radiuses to make a filler mud stop for my trailer fenders.

brav65 said:
Nice work Franko. I will keep this in mind for my lift. I have been pondering a design that would allow for adjusting the legs. I was thinking about a protractor type arrangement with a pin to lock the leg in place.
Click to expand...

I doubt anyone who's ever used one of them for anything but installing an engine hasn't thought of modifying it, whilst muttering dirty words. I thought about it for months and decided this simple solution would work for my needs.

I considered using nesting tube to make the legs width adjustable, but it's made with metric square tube, which is stupendously expensive in my neck of the woods, and it would have to be DOM tube and still be unlikely to have a close enough fit.
Last edited: Oct 28, 2015

Franko said:
Oh yeah, it works great, Jim. I've made all kinds of torch guides with MDF and 1/2 plywood, from straight edges to small circles for neat holes to run conduit on my utility trailer, and big radiuses to make a filler mud stop for my trailer fenders.
For my plasma torch, 1/2" holds the tip up from the cut surface 1/16". It seems to cut better held off some.
Click to expand...

Franko, great idea in using MDF as a guide. I purchased a plasma cutter last year and now I have a new method for cutting intrigue parts. Thanks. Bob

This morning I finished the welding.
The long legs were clamped with a long pipe clamp and tacked. 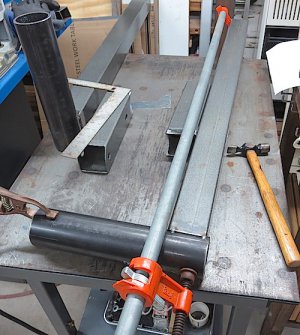 A slightly different set-up to clamp the short pieces. I used one of the wood wedges I made to cut them to give flat purchase for the clamp. 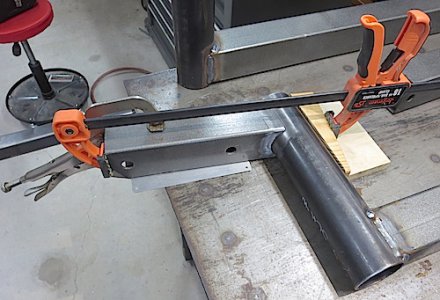 After tacking, I MIG welded everything. The welds came out ok for me.
I'm pretty happy with the fillet weld on the right. They aren't my forte. 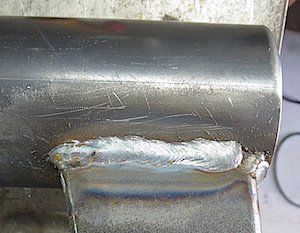 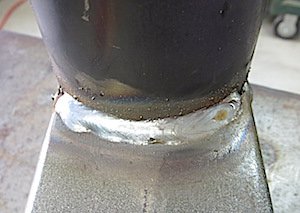 As an experiment, I tried out the non-automatic helmet. I was supposed to be able to see better with.
As you can see, I couldn't see anything and totally missed the joint and had to make another pass.
I cleverly did this on the bottom where it won't be seen. 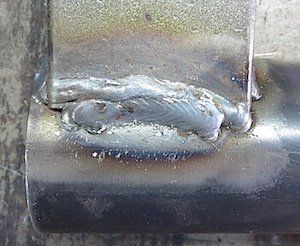 I installed the legs to see if they work. It seems to be okie dokie. Nothing left to do but paint them. 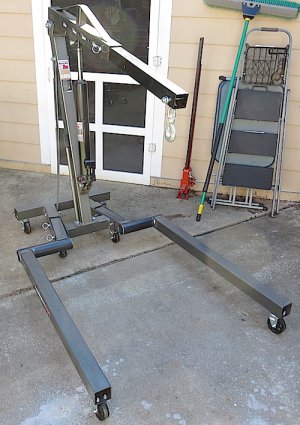 Here it is with the legs in the stowed position.
Oops. The bad weld is showing. Looks like I'll have to grind some before painting. 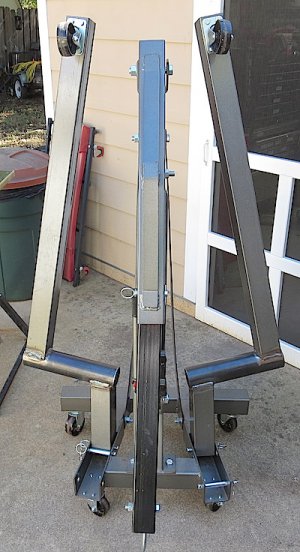 Phase one of the hoist mod is done but for the painting.
Phase two will be a knob for the jack screw. To be continued...
Last edited: Oct 28, 2015

That is on my todo list sooner than later. I can't lift machinery with the silly V shape. Very nicely done.
You must log in or register to reply here.
Share:
Facebook Twitter Reddit Pinterest Tumblr WhatsApp Email Share Link
It can take up to an hour for ads to appear on the page. See our code implementation guide for more details. If you already have Auto ad code on your pages there's no need to replace it with this code
Top
AdBlock Detected