[How do I?] Grizzly 140020 Tapping Attachment Arbor Removal?

Are you quite sure that JT33 arbor on the drill press does not have a Morse male taper on the other end stuck in a Morse socket in the spindle?
M

kd4gij said:
The arbor in the tapping had should have a jt33 taper holding in. And I would still like to know the number on your drill press.


If you have a set of wedges that fit the grove in the arbor. Make a spacer or stack some washers up to cover about 1/3 of the grove and use the wedges to pop the arbor out.
Click to expand...

I like your idea about the wedges, and in fact that may well be why that groove is there. It is a ways from the top of the tapping head itself (maybe 1/4 to 3/8 inch) but I had not thought about stacking spacers under the wedges. FWIW, I just removed my new keyless chuck with some #6 Jacobs wedges, to put the stock locking ring JT33 chuck back on for testing out the tapping head. It was very easy to do. I held my hand on one side of the wedges and tapped the opposing wedge with a small brass mallet. I had a box with padding in it sitting under the chuck, and it quickly dropped into the box. I will look to see if these wedges would fit the arbor's groove.

I just noticed tonight that the indent groove around the tapping head's arbor has a small (maybe 1/16") hole in it. Is that there for a reason? I've read about people using compressed air, or oil, or grease to dislodge tapers sometimes.

I've got the tapping head mounted using the adapter kit I bought, but I don't like this arrangement. It puts the drill table almost to the bottom of its range, and seems like an awful lot sticking out of the spindle. I really hope to find a solution that will be a much more compact fit. Would it be possible to replace the quill in this old beast with a more modern MT2 female taper equivalent?

Yes the groove in the arbor is there for wedges. Some times a jt mount can be a bear to get off. I had to use a spacer to get the chuck off of my HF drill press witch uses a 2mt arbor with jt33 mount. Had to bang the wedges pretty hard with a 18oz ballpeen hammer.

Oh and when you get the arbor out If it is a different JT than jt33 say jt3 or some other. Then just chuck the arbor in the lathe and turn the 2mt end down till you have about 1 1/2" of strait shank and cut the rest off and you can chuck it in your drill chuck

or get one of these.

I tried it out on some 6061 AL using a #5 drill and 1/4-20 Spiral Tap. The clutch never seems to be tight enough, and when it kicks in to "slip" it hammers hard like an impact gun or air chisel. In fact, it will dislodge the tap from its chuck, so it sticks in the hole when I raise the quill, unless I make the clutch adjustment ring as tight as I can make it using a spanner with down pressure on the clutch (the knurled adjustment ring is easier to turn under a load, for some reason). Once I finally got the tap gorilla tight so it didn't fall out, I was trying to adjust the ring some more (the numbers on it don't line up with what I think is supposed to be the indicator line stamped on it, unless I make it super loose) and I accidentally unscrewed the adjustment ring totally. So, I got to learn some things.

A - The top disc of the clutch is a part of the MT2 drive arbor. No wonder it wouldn't come apart. No way to swap arbors on this thing.
B - The "clutch pack" consists of a single disc inside the clutch, which mates with the disc on the arbor. See attached photos.

The machined "bosses" on the discs are assembled so they face each other. There is nothing in between them. No wonder they chatter like the devil when running. But I don't see how such an arrangement could smoothly operate the way I have seen tapping heads in some videos. It seems Grizzly doesn't show photos of their parts listings. So I have no idea what is "supposed to" be in the "clutch pack" mentioned in the parts list, but I suspect something is missing. Wouldn't a clutch normally have some smooth bearing surfaces that meet under pressure? There is a spring washer under the top plate, part of the arbor, which is the only compression device present inside this clutch.

C- I think the tiny brass screw in I mentioned earlier, in the edge of the knurled ring, holds a threaded ring inside it. This arrangement would mean the threads might be "indexed" such that the numbers could align with the indicator mark as the clutch starts to tighten, and then the screw could be tightened to hold the threaded ring in that position. If this was their intention, it is not adjusted correctly.

If anyone has seen the inside of these tapping head clutches, and can tell me if this thing is built correctly, I'd appreciate it. As it stands, with all the hassles so far, I am inclined to return it, since I bought it on Amazon Prime, and just spring for one that actually has a 1/2" straight arbor built in. 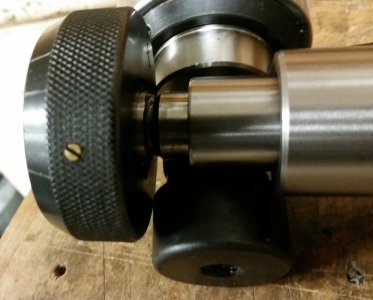 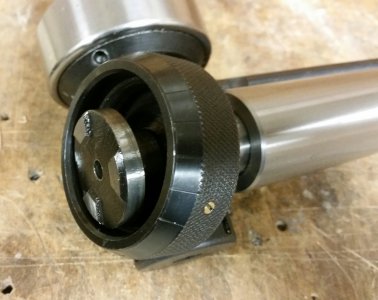 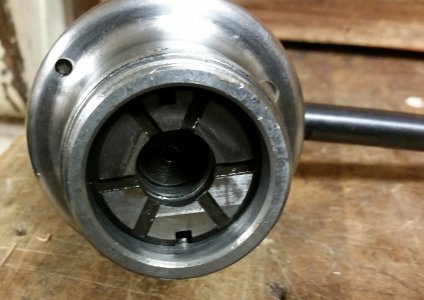 John Hasler said:
Are you quite sure that JT33 arbor on the drill press does not have a Morse male taper on the other end stuck in a Morse socket in the spindle?
Click to expand...

As sure as I can be dealing with a parts diagram in a 1985 product that has most parts no longer available.

Having pretty much decided to return the Grizzly tool and keep looking, and opening my wallet potentially further than I had planned, I found last night that there are some tapping heads made with JT33 arbor sockets in the top. Sure seems like the way to go. I didn't notice them before because they are about 2 times the cost of the Grizzly Tapping Attachment, or more.

Anyone here know much about Taco or HRF tapping head quality? Traverse Tool also has one with a JT33 top end.

On FleaBay there are even Tapmatic models like the RX30 and RX50 made with JT33 tops. Maybe I should just bite the bullet and go that route. I presume they are top quality. There are several Procunier listings with a straight shank I could also use, but didn't see any with JT33 top ends.

I appreciate all the help so far guys! Thanks!

Tapmatic is a top line tapping head. If it's in the budget that would be my choice.

Well If the arbor really doesn't come out, you have 2 well 3 options. 1) Buy another drill press that has a 2mt spindle 2) turn the arbor down to a straight shank and chuck it in the drill chuck. 3) Send it to me as my DP has a 2mt spindle.

JimDawson said:
Tapmatic is a top line tapping head. If it's in the budget that would be my choice.
Click to expand...

I'm sending it back. Decided to get a TapMatic on eBay. I'm in the final stages of figuring out which model I want. Know anything about their Model 50 TC/DC? I may end up buying that one. I found one that looks to be in great shape and was reportedly used very little. The seller is only half an hour away from here.
M

kd4gij said:
Well If the arbor really doesn't come out, you have 2 well 3 options. 1) Buy another drill press that has a 2mt spindle 2) turn the arbor down to a straight shank and chuck it in the drill chuck. 3) Send it to me as my DP has a 2mt spindle.

I'd be surprised if you liked it. The thing slips badly with a 1/4" spiral tap in a #5 hole in 6061 aluminum, even at its tightest that I can make it (with a spanner pin wrench) torque setting, and clatters so badly it will knock the tap out of the chuck. Either it is defective, or Grizzly is selling a POS. Or both.
You must log in or register to reply here.
Share:
Facebook Twitter Reddit Pinterest Tumblr WhatsApp Email Share Link
It can take up to an hour for ads to appear on the page. See our code implementation guide for more details. If you already have Auto ad code on your pages there's no need to replace it with this code
Top
AdBlock Detected