G0768 said:
I have the G0768 and use it quite a bit. The lack of reviews is self-perpetuating as this thread shows.

The lathe is made by Weiss as the VM210 variable speed model. Of course everyone puts their own label on it so you have to be resourceful to find relevant info but it is quite widely used (just not so much in the US). I can't post links yet but if you search "AMA210VG Lathe 8x16" you'll get just one example.

I gather you are no longer considering the G0768 but if you are then I'm happy to answer questions from first hand use.
Click to expand...

Hi, newbie here and a G0768 is what I am considering pretty strong to buy soon. Still seems there is not a lot of info on it as I have been looking on and off for a week plus now.
Since it has been almost three years - Do you still have the lathe and what would you advise about it now?
Thanks!

FWIW: Have had a G0768 for about a year as first metal machine.

Found that major limitations are really my experience as the Grizzly unit worked right out of the crate and has been more than I expected. Utube videos mostly complain about initial conditions, and some issues that warranty should cover. Variable speed and size- footprint of the unit were reasons of choice for this size/model, as there are many other imports to consider. I didn't know enough a year ago to really consider other brands such as PM, and had good experience with other Grizzly products I bought for the past few years. Also I didn't want to spend months/years rebuilding an antique that might have structural/wear issues that I could not completely appreciate at first.

Found that the stock tool post was difficult to work with, so bought a QCTP and some carbide tools- Found one fellow who had novel idea about mounting the QCTP on this model, and modified it to fit my needs:


A year later and I'm still happy, and will now about to get a PM25mv instead of selling the G0768 on craigslist and buying a bigger swing or larger bed size. Again- FWIW..
S

I have had a G0768 for about three years. Out of the box I would call it marginal at best. The headstock, motor and mountings, bed, and tailstock appear to be well machined and fit together nicely. However it was many of the minor components that were sloppy as far as fit. Inspite of those problems, I kept the machine and slowly corrected or manufactured those faulty components myself. Incidently, this is my first post on this site.

The major problems I encountered are as follows:

-Unknown to me, the spindle bearings were not seated correctly, ie too loose. This also made for a noisy machine. The overly greased bearings gave out after a few hours of heavy cutting, however replacing them was not difficult. Bought new bearing, and during replacement I slightly reduced the diameter of the left side of the spindle journal to allow that bearing to slide along it with moderate force. Before both were so tight on the spindle you could not get a feel of the pre load on the bearing races.

-The steel saddle plates were replaced with 3/4" milled brass plates. Those gave the saddle nearly a resistance free travel along the bed. I checked the lateral play of the saddle after installing those brass plates and found it less about .0005" but only after I trued up the sliding surfaces of the saddle and compound slide by milling and then lapping the bottom of each slide on a granite slab. Both slides now travel smoothly, with no tight or loose areas along their full travel. Prior to this, the slides were in my opinion, subject to lateral and longitudinal deflection.

-The tail stock clamping plate was poorly machined, which I replaced with a thick circular brass clamping plate. Now it locks like no one's business. 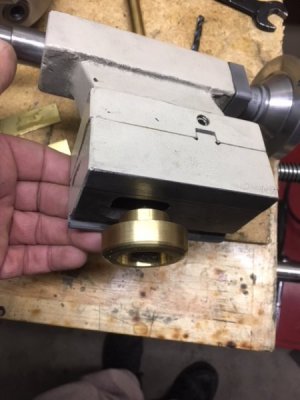 -The idler pivot block was poorly machined causing the idler pulley to be canted. I machined a new pivot block to correct this which also made it easier to adjust the tension of the belts. 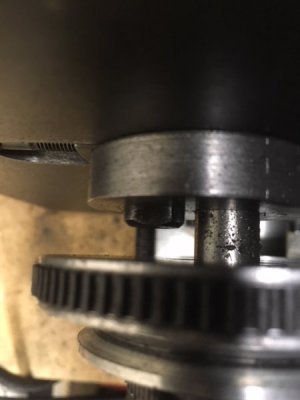 The minor issues I corrected:

-Mounted a A to Z QCTP. Pressed out the mounting stud and turned a hex head M8x1.25 bolt to press back in. Instead of shimmimg to raise the QCTP above the boss on the slide, I turned the bottom of the QCTP to fit over the boss. 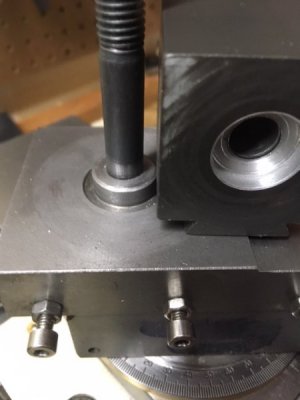 -Shimmed the half nut support bar to better align with the lead screw. Operates much smoother.

-Shimmed the gear pivot arm to better align the gear train, and made a few threaded shafts for gear mounts. I intend to make a new pivot arm when time allows.

-Cleaned and greased the gear box and removed metal on one of the gears to make it narrower. This allowed switching from left to right feed much easier.

Replaced the M5-0.8 clamping screws on the compound slide with M8-1.25

Added an accurate stainless degree indicator on the compound slide. By doing so it raised the compound about 0.180". The original plastic one was a joke, a bad one at that. I haven't installed a pointer on it yet. 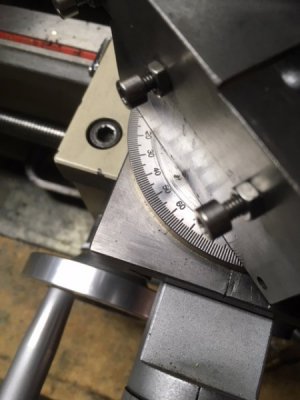 Other things to consider:

After purchasing this lathe I'm very hesitant to buy another Grizzly product. I considered buying a Grizzly G0704 mill, but instead paid the extra for a PM25MV with 3 axis DRO which I don't regret. Apart from safety shield pivot being too long and the gibs needing adjusting the mill hasen't needed any attention outside normal care.

Knowing what I know now I would have purchased a PM-1022V or PM-1030V lathe. I think Precision Matthews pays more attention to QA on there products. This is a statement from limited knowledge and experience of lathes and mills, so you may have a different opinion.

To sum this up, I spent alot of time thinking and devising methods to correct the stated issues. I think at this point I have a lathe that within it's size is as nearly or as good as the best similar sized lathes out there, but it took a long time to get there.
You must log in or register to reply here.
Share:
Facebook Twitter Reddit Pinterest Tumblr WhatsApp Email Link
It can take up to an hour for ads to appear on the page. See our code implementation guide for more details. If you already have Auto ad code on your pages there's no need to replace it with this code
Top
AdBlock Detected