Hafco AL900A lathe, is anyone able to identify what it really is?

I left it at the copy shop yesterday. They said they thought they could make clean enlarged copies. It won't be a big expense. There is no earth shaking information. Reading it will not make one a journeyman. It does cover changing spindle speed, power feed controls, etc. I think it would be a good addition here as this is the most informative thread on these machines I have found. It's good to have as much information in one spot as we have. What others have posted here has been a great help to me. I'll do a bit of payback. Tom
D

Tom. Thanks for that. Regards Doug
S

I picked up the copies today. They are far better than I expected and everything is clear. The illustrations are actually better than the originals. Now I have to figure out how to best get that clarity here. One thing I noticed while looking them over is that there is no brand name anywhere,. Not Shinwai, Hafco, Best Way, Jet...........nothing Just SW 900B. I'll get it on here soon.
D

Tom.
Excellent.
If your scanner gives an output of .jpg files around 0.750mb to 2mb per page, that should work.
.png is a good format.
But shy away from PDF if you can, that "locks" the file and does not allow resizing etc.

Will tis work or should I try it again? 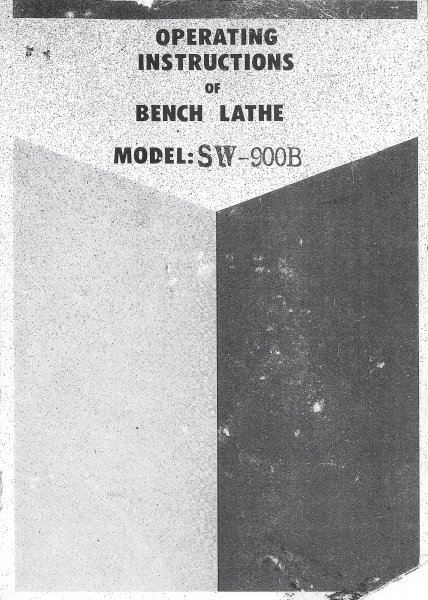 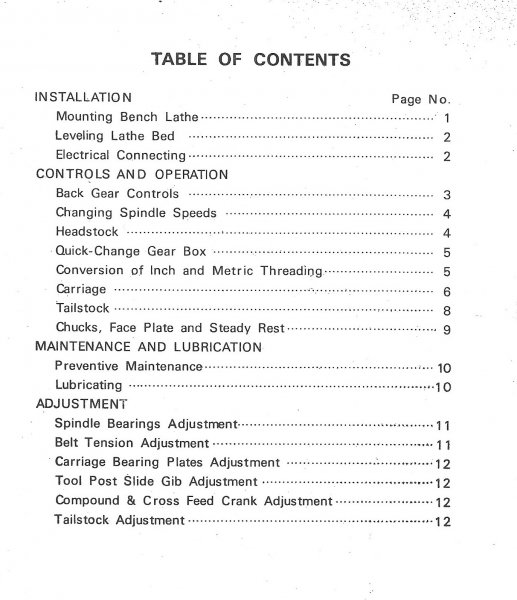 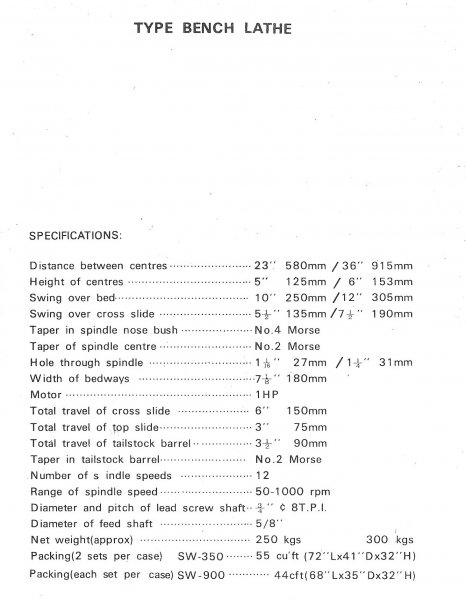 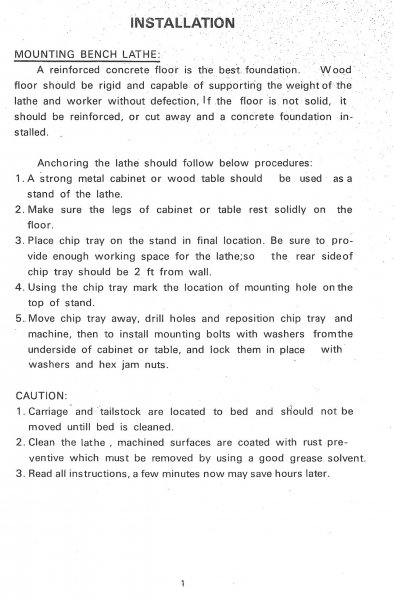 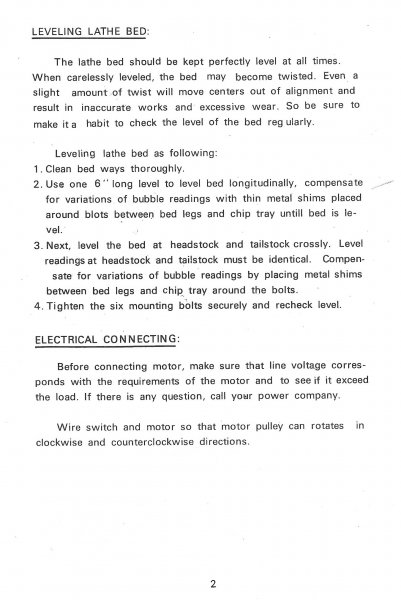 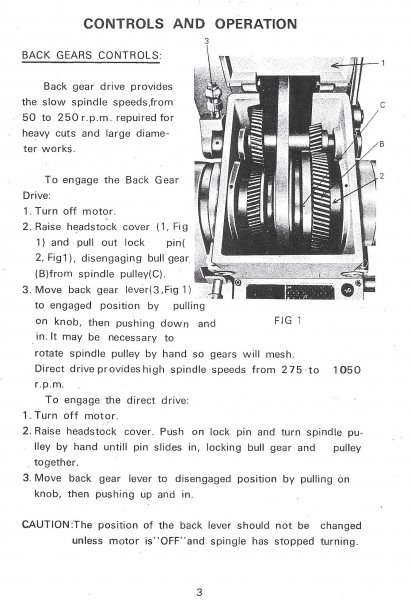 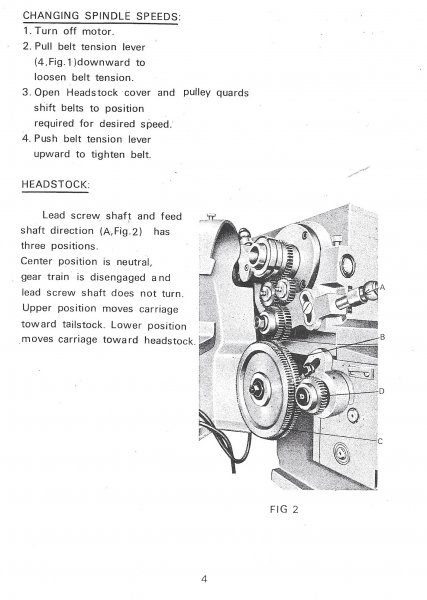 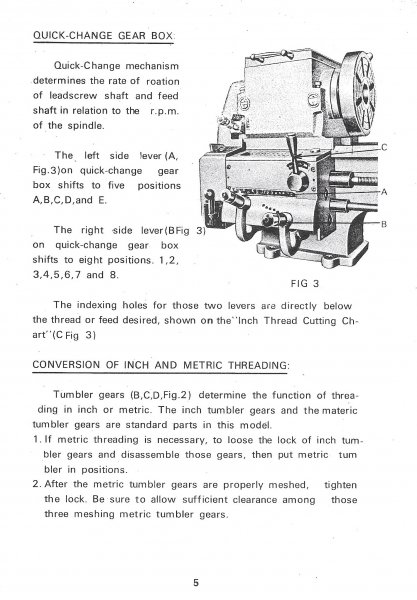 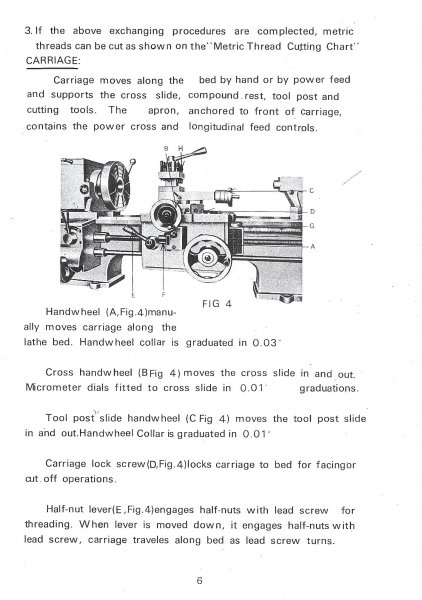 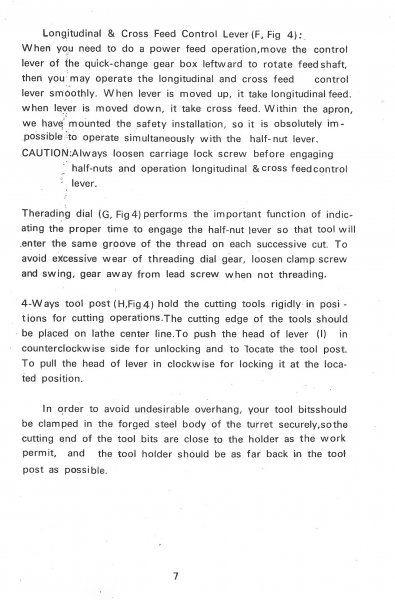 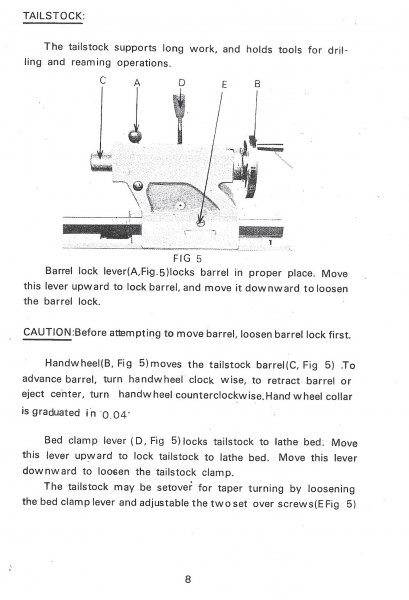 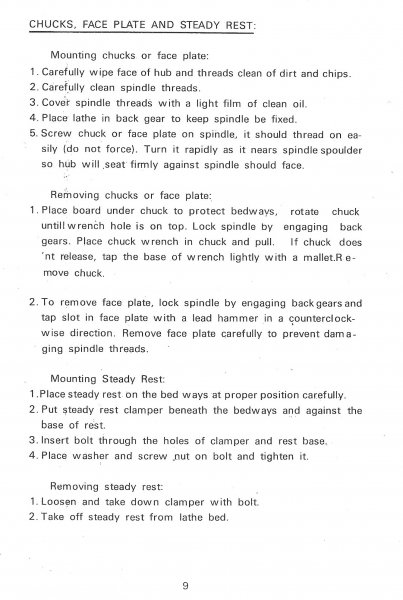 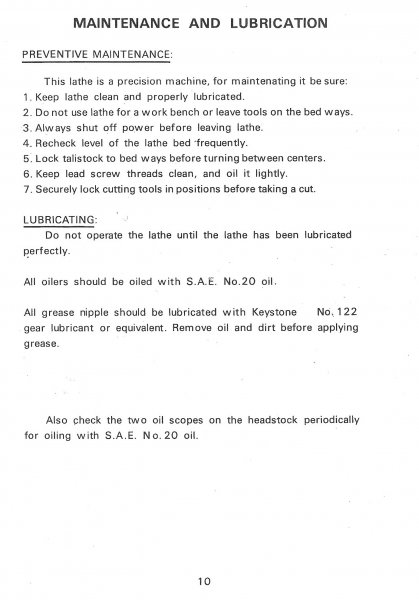 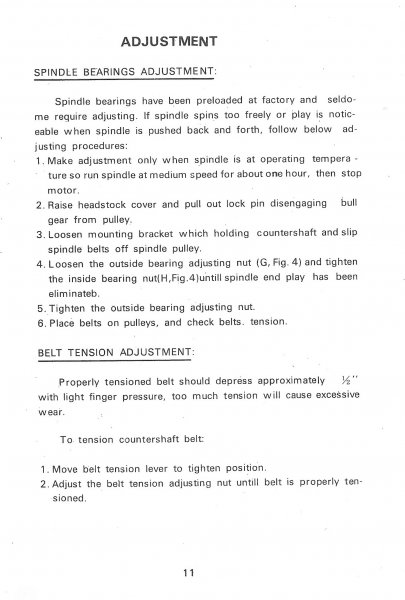 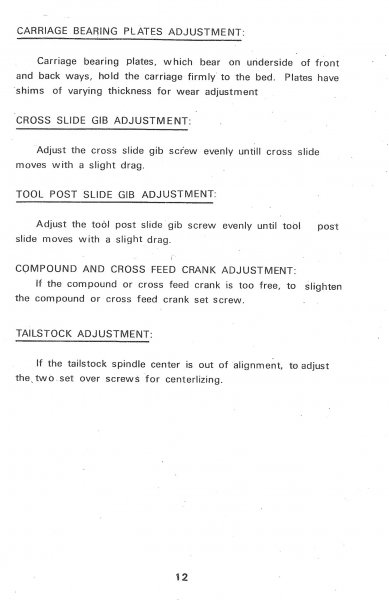 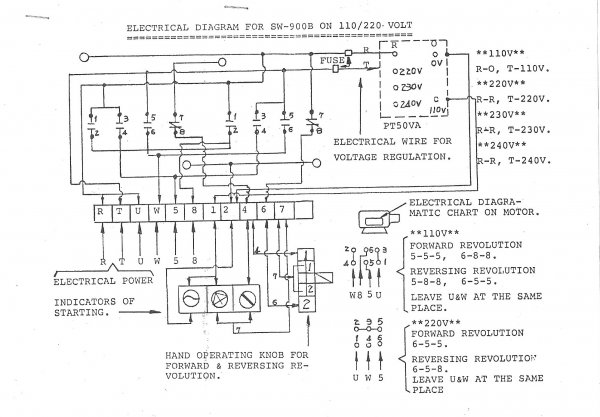 Tom.
All good thanks.
I was able to download them easily.
Many thanks for the trouble you have gone to.
Regards Doug
S

You are welcome Doug. I hope this will help you and others with these machines.
D

Who knows, maybe somebody will surface with a SW-900A manual after seeing what you
have done.

Effectively however, it is just the tumbler gears and switch panel that make the difference between the 2 versions as far as I can tell.

I have not seen another with the same switch set up as mine. The manual doesn't show switches. I don't know about the gear difference.
D

Mine does not have the tumbler gear lever on the side. I has 3 shafts along the bed. Thread cut, drive shaft and on/off shaft. It also has the flat
face from the Norton box all the way down to the gear 2 gear selector levers. This is why I think it is the 900A. But essentially the same machine as yours. Regards Doug
R

Hi Doug and everyone else,

i just purchased a Hafco AL-900A from a deceased estate also.
Upon closer examination of all the parts it appears i am missing the tailstock,
I rang Hafco and was told by a young sales rep that they never sold my 40 year old lathe!
Strange i said as it has your badge on it and thats where i got your phone number.

Does anyone have a suggestion on what might fit and where i could source one in Aus.

Sounds about right for Hafco after sales service!
D

Ron.
Ditto to NortonDommi's comment.
As to the tailstock, from my research any tailstock from any Taiwanese lathe of that era with the same bed cross section should fit.
Your task will be to find a scrap yard etc. that has a dead lathe discarded out the back.
There are some of the original companies still in business in Taiwan from the 1980s. Who knows, they may still have a compatible tailstock.
Again, the task will be to find them.
Can you not back track through the previous owner's family what he did with the tailstock, it should not be too far from the lathe?
R

Trying to backtrack now, but the lady says i have everything that she had!
You would think that a replacement tailstock for that size lathe should be able to be purchased new?

Doug, mine being the same model and seller as yours would it be the same original make as yours?

Your 3 points addressed in order:

We are talking 1980s lathes. 40 odd years is way longer than most technology goes without 3 or 4 or more generational changes in design.

There is an online sourcing site (bit like Alibaba) for Taiwan, see if you can find out its name and have a look in there for one of the original companies. IIRC a number of those names are mentioned in this thread or other threads about Taiwanese lathes, say some of the ones that the Yanks have that have been nameplated as Jet, Enco etc. At the end of the day, they all came from about 12 companies in Taiwan.
Mine is a Shenwai. I am told that it is very early as it does not have the step where the Norton head contacts the bed. But having said that, the latter stepped ones had the same tail stock to the best of my knowledge.
Hafco never sold mine either, despite their sticker being on it......
Ultimately, you need a tail stock with the same footprint ie., same bed cross section and with the same centre height. Other than those 2 criteria it can be any shape or design, it just has to fit.

It appears that Hafco not only has no clues about what they sell, they also have no idea who they sold it to. The bottom line is because they don't have any useful competition, they simply don't care.
D

That seems to about sum it up.

Ron, how about putting up some detailed dimensions of the bed profile and height to centerline of your lathe, and we can cheque to see if ours will fit. Then you will know if you can order a new tailstock with the confidence that it will fit.
Last edited: Jan 22, 2020
S

I would check with Grizzly. Some of their older lathes were the same as these. They still have some parts and the tail stock from some newer models may fit.

Ron, Give Modern Tools 03 9761 2929 Melbourne a call, they supply Taiwan machines such as my Liang Dei LD1216 Lathe. They may be able to match you up with a tail stock. I have found them very friendly and knowledgeable about their products.
R

I work away and am back home this weekend so i will take some photos and measurements and post them up.
Thanks for the number Bob, i will give them a call when i get the measurements.
The previous owners are letting me have a look "under the house" this weekend too, maybe he threw it under there!
I got minimal tooling and accessories with mine, hopefully i find a big box of goodies in the great abyss..
Doug, how did you eventually identify the original manufacturer of your AL-900A?

It was a long and involved process. I found a sticker on the back of the bed. In searching online for Taiwanese lathe companies I found a number of them and emailed all. Only one responded (after quite some time), he recognised the sticker and identified the company and what had happened to it. (closed down long ago). But the email address I had for him no longer works as otherwise I would have given it to you. His company was a contemporary of Shengwai.
R

Ok thanks Doug,
i will have a look all over the lathe and see if i can find any other identifying stickers apart from the one that "never sold them"

On a side note, do you think these AL-900's are bad for our health? we now know of 2 that have done away with their owner.

I think it works like this, you get to your 50s and can now afford a lathe, that you never bought because you never had the money.
These lathes were 1980s, so add 30 to 40 years and it is no surprise to me that long term owners are falling off the perch.
With my lathe, the owner would have bought it sometime in the 1980s when he went contracting (self employed auto electrician), died a couple of years back, far as I know he was in his 60s.

Given how good a quality they are and if reasonably looked after and not worked day in day out and thus heavily worn, then there are still good ones to be had.
Provided the owners haven't discarded essential parts!
R

Hi all,
What a weekend!
Evacuated from home due to local bushfires, H-M website down and bonus missing parts!
Hope everyone is safe in the bushfire zones, we had no power, internet, land-line or mobile service for 24 hours.
But, i did still manage to explore "under the house" and found the missing tailstock and the fixed and travelling steadies which i had forgotten about.
I also found some tooling and an old micrometer set, so it was worth driving past the fire on the side of the highway at Bodalla.

Ron
Excellent. I did think the tailstock shouldn't have wandered too far away unless something weird had happened. The steadies are a bonus for sure.
Regards
Doug
R

Where is the best place to buy some way oil? Is hydraulic oil ok to use
D

Ron. I use hydraulic for the ways and general rust prevention. Also use it in the Norton head. Regards Doug

Well done Ron, Lucky you for finding the missing tailstock and steady that you had forgotten. Now you can get to work on that new to you lathe, hope you have a lot of fun.

rontlz said:
Where is the best place to buy some way oil? Is hydraulic oil ok to use
Click to expand...

You might find way oil a bit hard to find, any oil is better than none, but I'd be inclined to use a straight SAE 30 grade oil without any additives. I'd also use that in the gearbox, although you might want to see if you can determine what is already in there, some oils don't mix that well.

I have since noticed in the copy of the owners manual they say use SAE 20 grade oils throughout. I suggested 30 because my lathe book says use 30 and that's what we used when I( was an apprentice. I also use chainsaw bar oil on the tumbler change gears because it doesn't throw off so easily.
Last edited: Jan 27, 2020
You must log in or register to reply here.
Share:
Facebook Twitter Reddit Pinterest Tumblr WhatsApp Email Link
It can take up to an hour for ads to appear on the page. See our code implementation guide for more details. If you already have Auto ad code on your pages there's no need to replace it with this code
Top
AdBlock Detected