I lost one of the pins for my clamp type knurling tool so I made a new one. I assume it needs to be heat treated as the ones on the tool have already started to wear a decent amount (Chinese made knurling tool). I made the pins from some 12L14. The "equipment" I have at my disposal is a propane torch and a firebrick. My thought was to initially heat to an even cherry red then quench in oil then draw it back some (??). What I don't know is to what color or temp I should heat to to draw it back some as I assume that the oil quenched part might be too hard and how can I cool it slowly if that's what's needed. Any education/suggestions would be greatly appreciated.

I also want to heat treat the "handle" I made for my collet chuck for my lathe (straight round bar that fits in a hole in the side of the chuck to help tighten). This too is made from 12L14 and it already has a small bend in it that I thought hardening some would help alleviate. I thought this piece might need to be less hard than the pins. ???

From google, McMaster's rates 12l14 as poor for wear. It only has .15% carbon so can't be appreciably hardened. You may want to go with 4140 which has applications as axles.

Propane torch or MAPP gas will take a small pin to cherry red (~1500°F) pretty quickly. Quench in oil as you mentioned, then temper back in a toaster oven after polishing. On my phone so don't have a temper color chart in front of me. If you google it or search this site under my name and "temper", you'll find a temper color chart.

You could also temper with your torch. I've found it easier to set the part on a block of steel and hit it instead of the part directly. The colors can go by pretty quickly. Heating it by conduction slows the process.

Bruce is correct, 12L14 although a dream to work with is a poor candidate for hardening. Much better off with a 4140 or O1 tool steel.

For the actual heating, if you have a couple more fire bricks you can put together a “corner” to dramatically improve the size of parts you can do. Here’s a quick photo of one I have on my bench now — this is not mortared or attached together in any way, just stacked and butted to each other. The fire brick really bounces the heat back to the part, so even a propane torch can bring up to brazing temperature fairly easily. I’ll often set the piece to be heated on a couple of washers or small scraps of bolt to get it off the actual brick surface a bit for a more even heat. 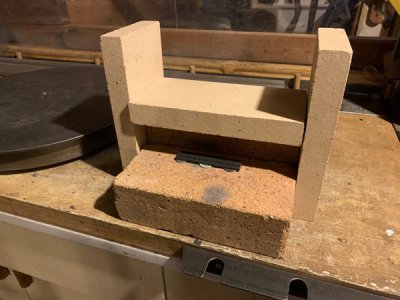 The L in 12L14 means lead. There is lead in the alloy, which makes it a dream to machine. However, it also makes it difficult to weld and non hardening.

Heat your pin to the point where a magnet will no longer attract it and slightly more. Then quench in oil or cold water.Polish to a bright surface and draw your temper by heating to a color in bright lighting. I would think that a amber to bronze color would be about right. For a small part like that, a heat gun would probably work best. You can also draw the temper by temperature in an oven for a more uniform hardness. Another way to draw the temper would be to heat in a solder bath. 60/40 solder melts around 350-360ºF.
M

And it is so dang cool to see steel floating.

Before drawing/tempering, clean the piece shiny bright and wash/rince with lacquer thinner or some other oil solvent. Oil will turn the same colors as steel but at a MUCH lower temperature.
R

I didn't even think about the heat treat ability of the 12L14 when I made the pins. It was what I had and went with it. I will try to find something a little more appropriate. Thanks for all the answers though. Next question is what hardness should I draw back to for these applications?

I would think you could case harden the mild steel?
You would need to have some sort of heat treating oven to soak for a while though.
I have a Hot Shot 360 on my long list.

You could also just buy the correct size dowel pin which is already hard, maybe have to cut to length, and be done. But that does take all the fun out of it.

I built a knurling tool a while back, I used a shoulder screw for the axle. They are hardened.
B

Dowel pins are commonly used for pins for knurling tools, I have one so equipped, they would be better than anything that you could make so far as wear resistance is concerned.

I would look for the right sized hardened steel and go with it. Too much trouble to bother with trying to heat treat a couple pins.