I have just acquired an old Hendey Tiebar 14x6 lathe (manufactured in 1920) with the intentions of doing a (somewhat) complete refurbishment. I have decided to start this thread as an attempt to document the process.

This thread may start out slowly, as I have a couple of other projects in the works... just bear with me.

First, a little background information is in order. I bought this machine from an older gentleman who had purchased it as a package deal along with a Craftsman lathe. He wanted the Craftsman, but not the Hendey.

He had bought it out of a barn, where it had been sitting for about 15 years. He said he believed it had been used to turn wooden bobbins in the textile mills, it was full of wood shavings when he got it.

Mechanically, it is in decent condition, everything works except the smaller 3 position gearbox would not go into the vector on the right side (more on that later).

All of the feeds work, as does the half nuts. There is one gear with a broken tooth, but there were 5 extra gears with the lathe, and one is a replacement for the broken gear.

It came with a 2 hp, 220v 3 phase, 2 speed Wagner motor and a Turner Uni-Drive 4 speed gearbox. The motor and gearbox both work as they should.

At some point in the past, someone had painted the lathe with latex housepaint, which the seller had scraped off, leaving a rather ugly lathe. 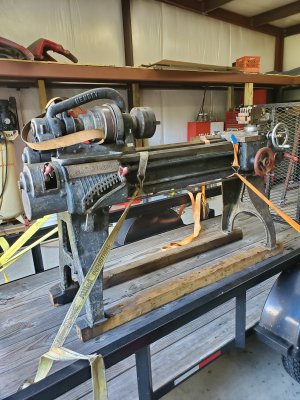 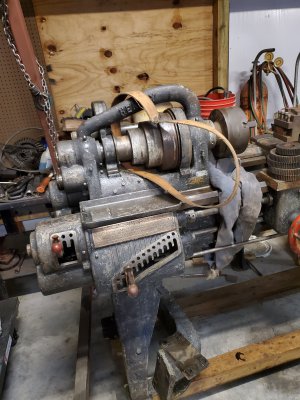 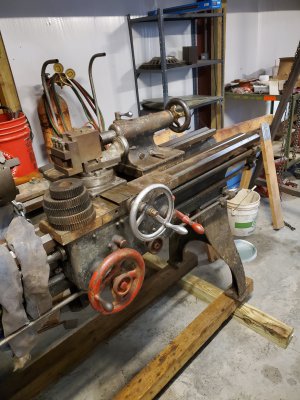 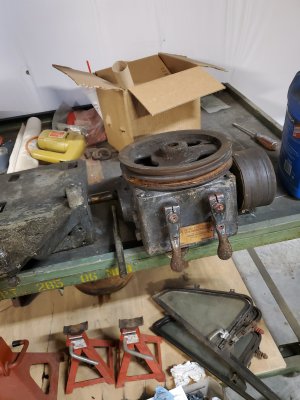 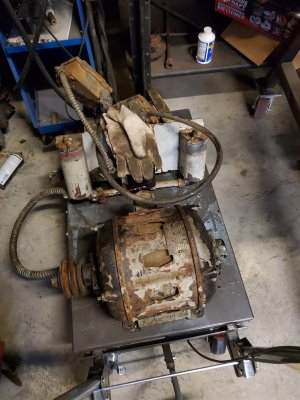 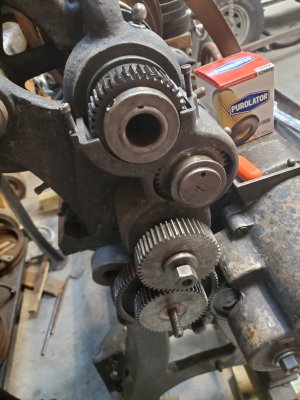 I began going through it this afternoon to find out exactly what I have (or don't have).
All of the gears look good except for the one that has the broken tooth.

It didn't take long to figure out the issue with the smaller gearbox... the handle had been bent, and was hitting the side of the casting before the shifter lined up with the rightmost slot... 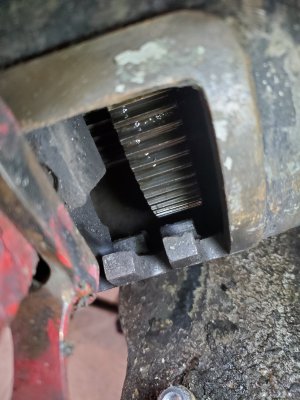 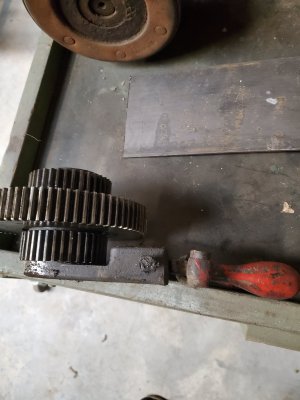 A couple of taps with a rubber mallet to straighten the handle fixed the issue.

The tailstock handwheel has been broken and (poorly) repaired... 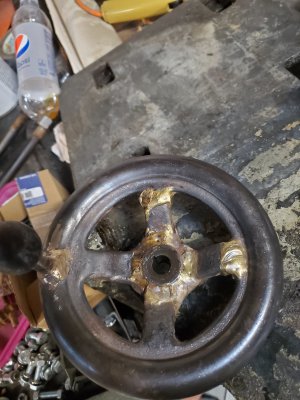 I will have to try to find a replacement for it... if I can't, I will just use it. It is functional.

At some point, someone has replaced the cross slide ballcrank with an aluminum handwheel... I'll have to find a replacement ballcrank, also.

I'm pretty sure the compound is not original, either... it doesn't look right, either in the design or the way it is mounted... 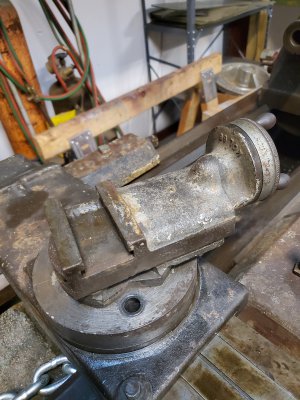 It does have a very interesting shop made(I think) tool post on it... 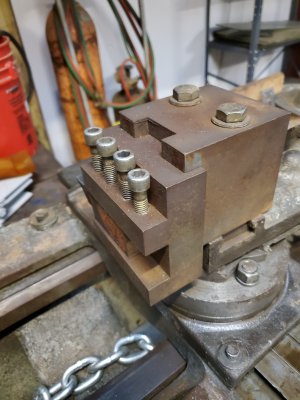 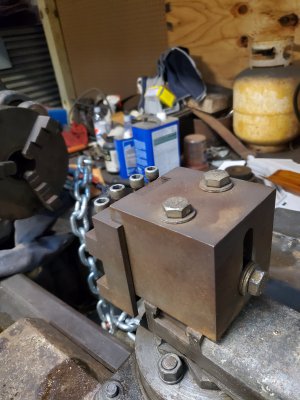 I had some time to tinker with the Hendey today, so I took the non-original compound apart, cleaned it up, oiled and reassembled. It was almost seized, it felt like it was full of sand. It works now, not extremely smooth, but passable. If I can't locate a Hendey compound, I may use it...

The compound was mounted on a shop-made 6" diameter by .950" thick block. The block was poorly machined, it was not flat on top or bottom. I chucked it up in my South Bend and skimmed both sides flat, then put it on the surface grinder and fuzzed it to a nice ground finish. 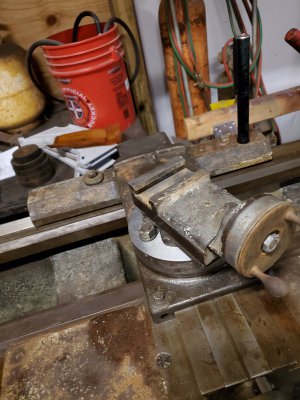 I have a 9½ inch Union 3 jaw combination chuck that I am planning to put on it anyway. I'll have to make a backplate, but thats not a big deal.

If I have time tomorrow, I'm planning to start taking the major assemblies off the bed, getting ready to clean and paint the bed. 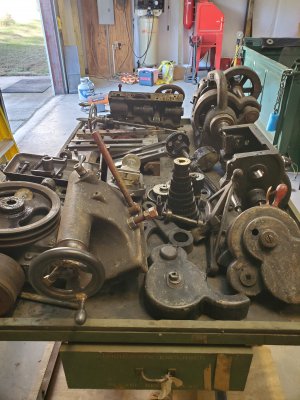 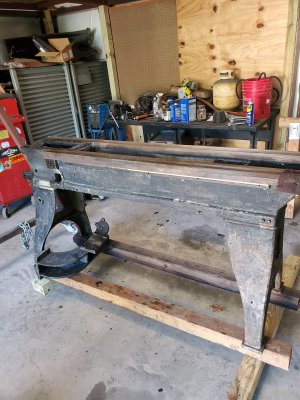 You would expect a 100 year old lathe to be nasty... this one didn't disappoint... 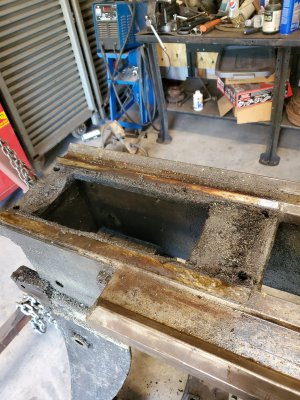 There was no oil in the apron... there was no room for any. It is completely full of gunk.

The good thing is, everything seems to be in very good condition with no excessive wear that I have found... yet.

682bear said:
I may not ever get it back together, but at least I got it apart...
Click to expand...

Don't worry. You will be able to assemble it back. I took my Hendey apart and it was stored all winter in the cold garage and I manged to do that by the spring. They are quite simple. Just be careful - old iron is fragile.
Do you plan to scrape ways and slides ?

Geshka said:
Don't worry. You will be able to assemble it back. I took my Hendey apart and it was stored all winter in the cold garage and I manged to do that by the spring. They are quite simple. Just be careful - old iron is fragile.
Do you plan to scrape ways and slides ?
Click to expand...

No, the ways actually look to be in excellent condition... there are some dings near the headstock, but very little noticeable wear.

I began the cleaning process this afternoon, but didn't get very far. Cleaning it is going to be very time consuming.

During the disassembly, I was concerned about trying to remove the gearbox/leadscrew assembly together. I am by myself and don't have anyone to help, so I wasn't sure I would be able to remove both together without risking a bent leadscrew.

A couple of years ago, I rebuilt the apron on my South Bend 14 ½... I unbolted the gearbox and slid the leadscrew out of the apron together... the Hendey is a lot heavier... the SB was almost too much to handle alone, I don't really want to do that again.

It actually worked out pretty well.

Great progress. For cleaning I am using just pure diesel fuel - cleans fast, cheap and leaves thin oily layer that prevents rust. If you need to paint part - use laundry soda or TSP as a degreaser.

I took a few days off from the Hendey to remodel my daughters bedroom... I got started back on it yesterday. I've been cleaning/ degreasing the bed and legs. Yesterday, I removed the legs, and this morning, I sprayed them down with degreaser and fired up my pressure washer.

The bed is cleaning up nicely ( I haven't pressure washed it yet, but the ways look really good. 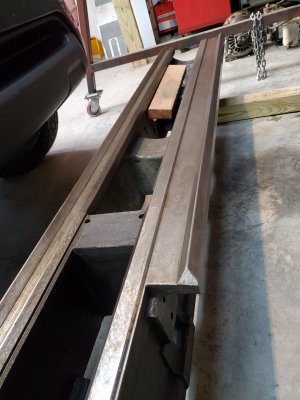 The legs came pretty clean with the pressure washer... but the leg under the headstock end has been broken and repaired. 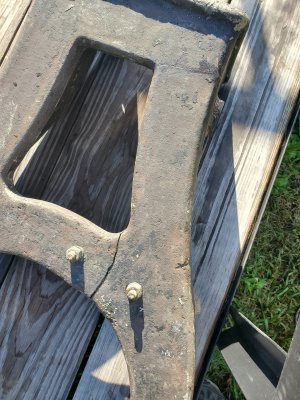 I'll start a new thread on that in the general discussion area where it may be seen by more members.

I'm trying to decide on a color to paint it. I was originally thinking about using the same color green as my other Hendey... 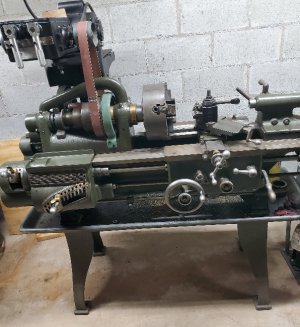 But now I am really considering a dark gray...

IDK, I'll figure it out.

Since it has been too cold out in the shop to do any painting on the bed and legs of the Hendey, I decided to work on some of the smaller parts that I can do in the basement.

The handwheel on the tailstock had been badly broken and brazed up. I found a very similar handwheel on e-bay. It is in pretty nice condition, but the hole in the hub is ¾ inch diameter... the Hendey handwheel has a ½ inch hole.

Today I had planned to bush the hole down to ½ inch... but as I was taking the old wheel off the tailstock, I discovered that the lead screw shaft was also bent. I'm guessing someone had let the tailstock slide off the end of the ways and fall... that would explain the broken wheel and bent shaft.

I started working on the shaft... rather than machining a new one, I attempted to straighten the old one first... and somehow managed to get it straight within @ .005"... I can live with that.

To bush the 'new' wheel, I used a ¾" diameter piece of bronze... I machined a keyway into it on the mill, then used JB Weld to glue it in the hub of the wheel. I also glued a key into the keyway. After the JB cures, I will set the wheel up on the lathe and bore a ½" hole through the center of the bronze, leaving a ⅛" wall bushing hopefully permanently bonded in the hub. 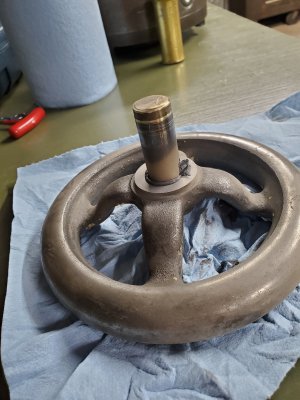 I finished the bushing for the handwheel this morning... I put the faceplate on the South Bend and mounted the wheel to it. 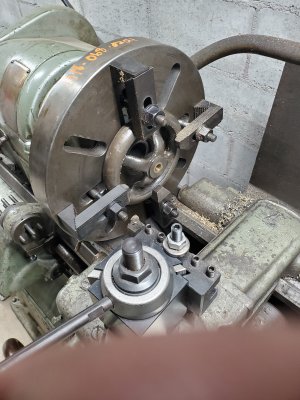 I cut off the excess bronze with my portaband, then faced the rest flush with the wheel hub and drilled and reamed the center hole.

I had a ⅛" broach for the keyway, but had to make a bushing and shim. I used the end of the piece of bronze that I cut off for the bushing and cut a piece of .010" shim stock for the shim. 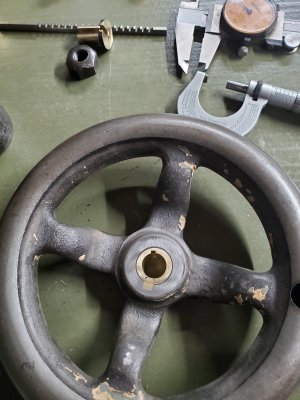 Everything went as planned... I think it turned out pretty good.

Mounted on the tailstock... 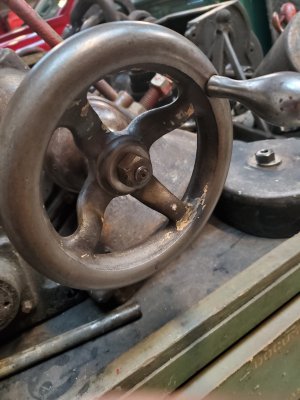 -Bear
You must log in or register to reply here.
Share:
Facebook Twitter Reddit Pinterest Tumblr WhatsApp Email Share Link
It can take up to an hour for ads to appear on the page. See our code implementation guide for more details. If you already have Auto ad code on your pages there's no need to replace it with this code
Top
AdBlock Detected