I might add that the adapter is only 3" long so the smaller end is just too large to fit. 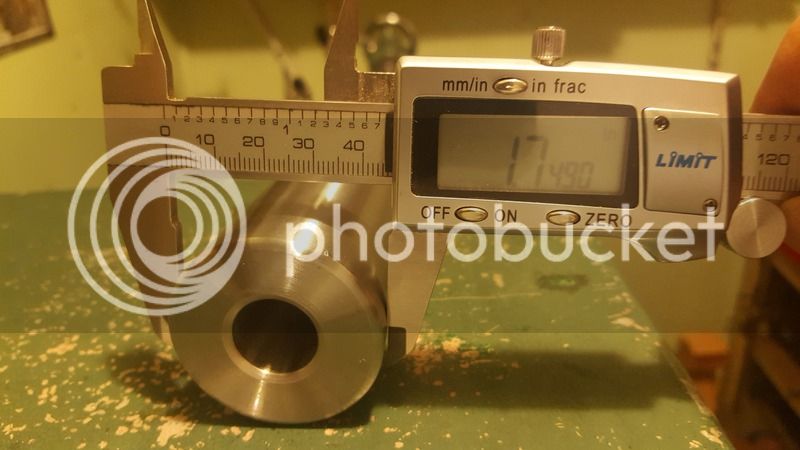 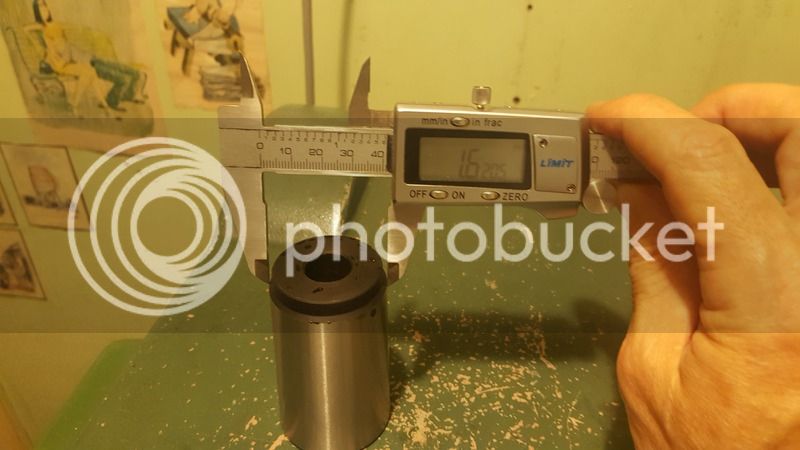 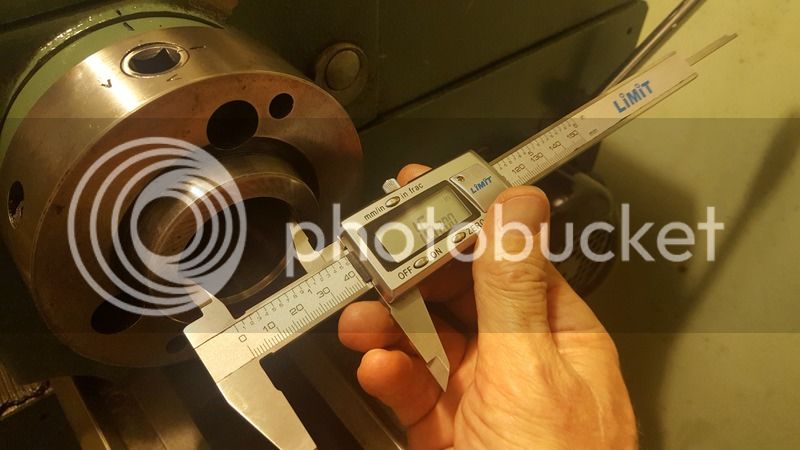 So I went to a SouthBend Yahoo group and did some searching after rereading some of my posts and responses from helpful blokes and found this... 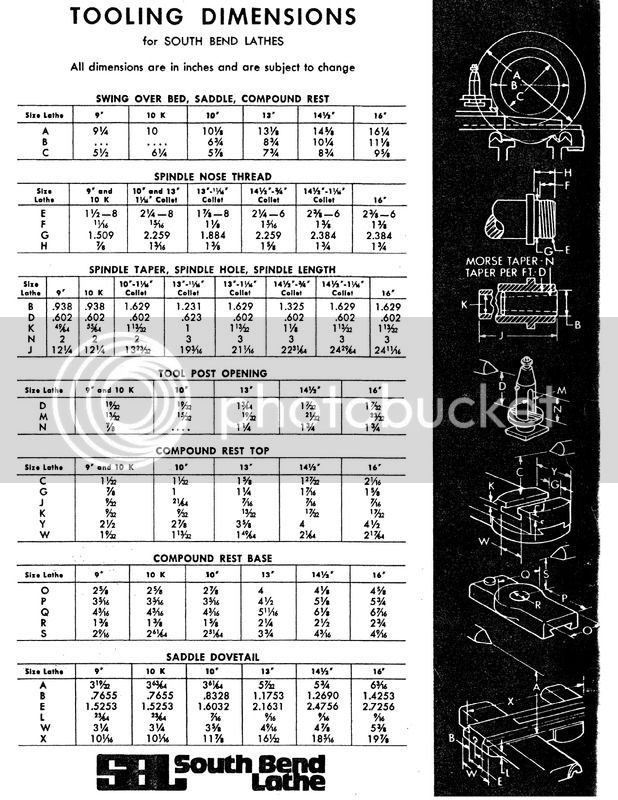 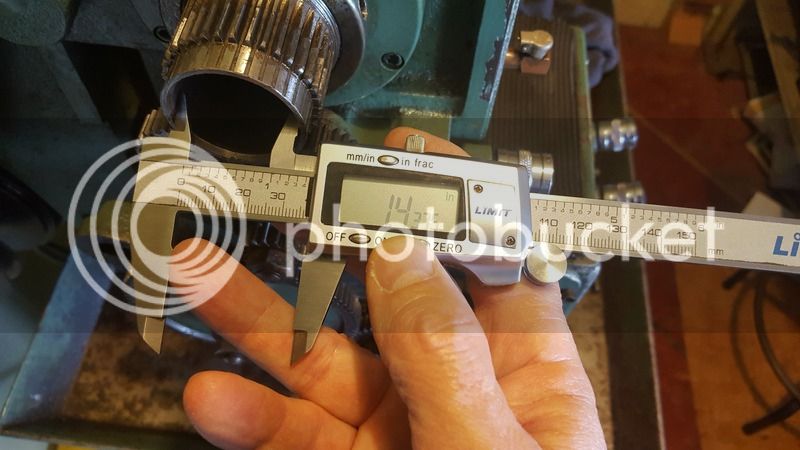 So although my lathe has a bigger spindle bore, and a 13 1/4" spindle length the nose cone may accept an adapter that has the dimensions listed in the tooling sheet. a slope of .602
4

Register Today
The .602" slope or taper per foot is almost a Jarno taper. But Jarno tapers are all .600" T.P.F. interested. I have a adapter here I bought for my Sheldon lathe thinking it would work. Fiddling with it the other day I notice it wiggles a little bit at the big end. Now after seeing this, I know now its for a South Bend lathe, not a Sheldon. I may set up on my T & G and re grind the taper to match that in my Sheldon lathe.
M 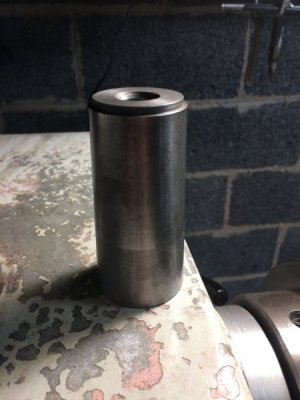 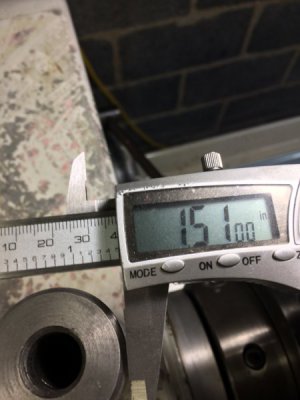 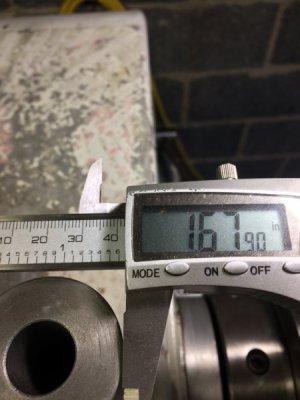 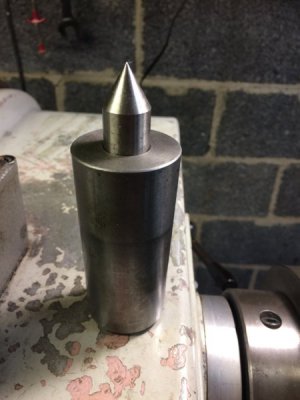 4gsr,
Whatever you have is not for a South Bend lathe,I'd say it's what they(who ever sold it to you) said it is.South Bend would've never used a Jarno taper in any lathe spindle.They used Morse tapers,and since Hercus is a DIRECT copy,they used Morse tapers too.Sorry I'm late to this thread.

The adapter you see in the pictures above is a MT5. Doesn't fit my spindle even though its a D 1-4 . Anyway, the toolmakers at my college ground the adapter to the .602 slope with the correct dimensions. Fits perfectly.

Here are a couple of photos 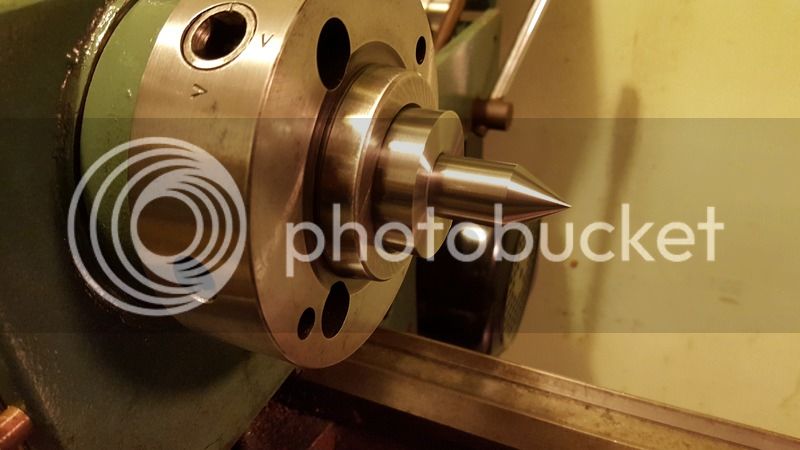 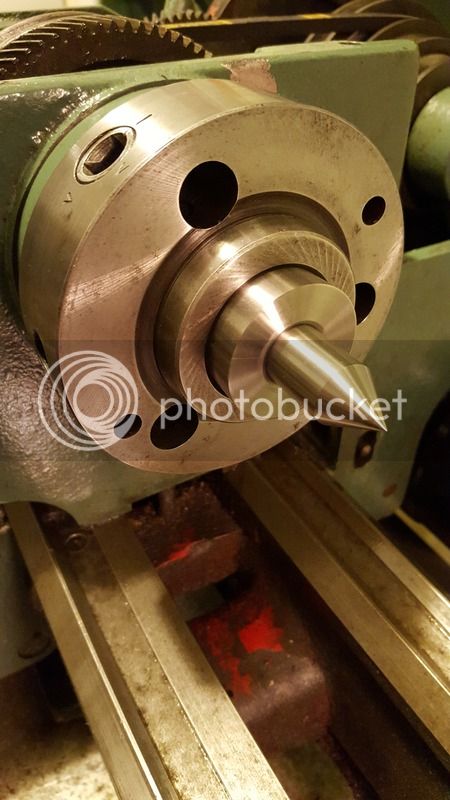 Mickey, do you have the exact specs for your lathe?

I wonder what your manual specs say about the internal taper of the spindle...

Oh BTW thanks for your replies, I appreciate any help.
M

Glad you were able to get that done.I'm stumped though as to the fit here is a few pics of mine so you can see you are close to factory anyhow. 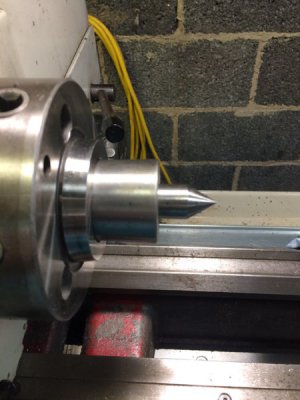 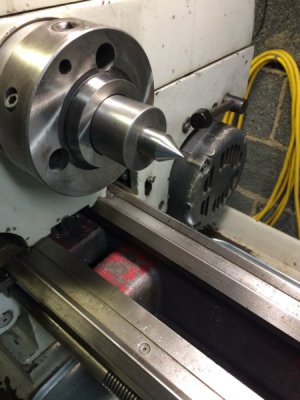 Boris,
No I'm sorry the manual I have shows a threaded spindle in the diagrams and there isnt a spec sheet in it.

My next job will be the collet adapter ... and a draw bar

I'd love to get ahold of a specific manual for this exact model.. I've got some interesting stuff and diagrams with the D 1-4 spindle in exploded view for dismantling but the specs of the spindle taper are absent. When I get some time over the weekend I'll post an attachment for you as it may be helpful for you.
M

The manual I have is a Government manual but its about the same as the one you posted a few posts ago,except the spindle diagrams,and the are drawings of a threaded spindle,lol.

Here's the Camlock spindle assembly in exploded view but it's from a geared head lathe so the gears are different to the cone pulleys and the bull gear but it interesting none the less.

Thought I might celebrate by posting my success at my second practice run on threading.... 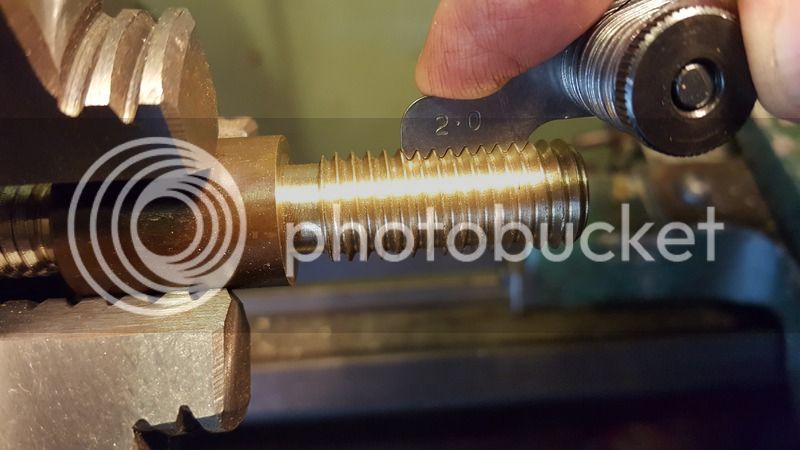 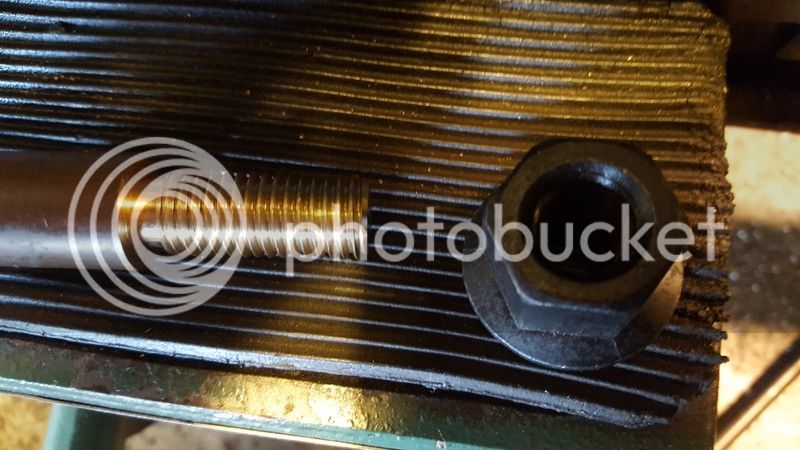 Thanks, it was very satisfying. Small potatoes for you guys but for me it's a big deal.

you are welcome,
anytime in the shop is very satisfying.
don't worry about what anybody thinks.
at the the end of the day, if you are happy with what you did- that's all that really matters

I finally found a C5 collet adapter that fits my spindle. 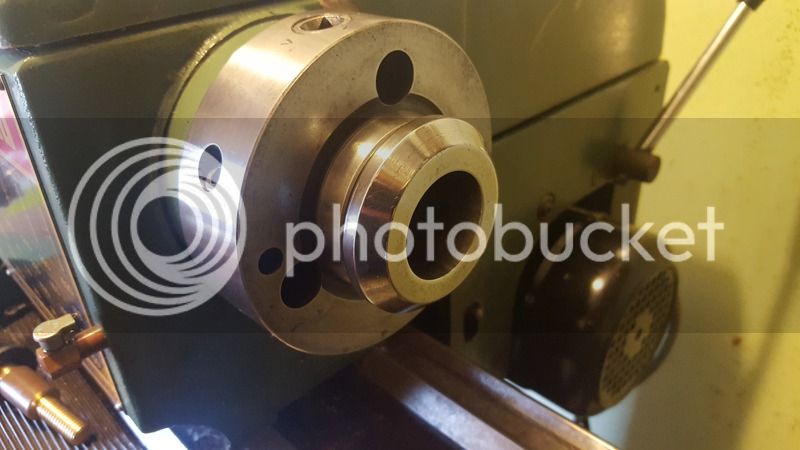 Only thing is the small pin is missing. Need some advice...do you reckon I could braze in a pin or should I weld it in? I'm a bit concerned the welding temp might soften the adapter and the pin steel. Any ideas welcome. 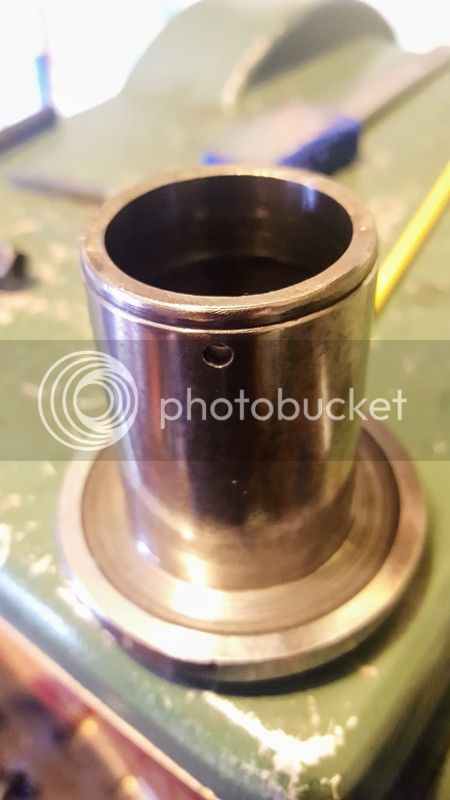 BTW its a southbend original for a D1-4 spindle.

Boris Ludwig said:
Only thing is the small pin is missing. Need some advice...do you reckon I could braze in a pin or should I weld it in?
Click to expand...

I would make one from drill rod to a press fit and then just press it in. I would not harden it.

I need some help... BTW Here I might say something wrong or beside the point as I try to explain what is happening.

Tried to cut an imperial thread 12 TPI. My lathe is an ATM with means the leadscrew has a 3mm pitch and the gear configuration is set up for metric. So is the quick change gearbox.

I bought the "kit" allowing imperial threading. This consisted of a set of gears - the 80 is not shown but that came with it too.

It also included this table

So I changed gear setup and found I didn't have another bush and bolt for the 80 tooth gear as shown in the table but I was advised that if I can get the compound 63T-64T to drive directly to the screw gear - 48T -it's fine as the 80T only transfers from one to the other.
So I did that, but I'm not so sure it's right. I reckon that if the 80T was in the position that's shown in the diagram the screw gear would turn in the opposite direction. I'm not sure this is connected with the problem I'm having but bear with me so I can get to the final result.

BTW here's how I connected it 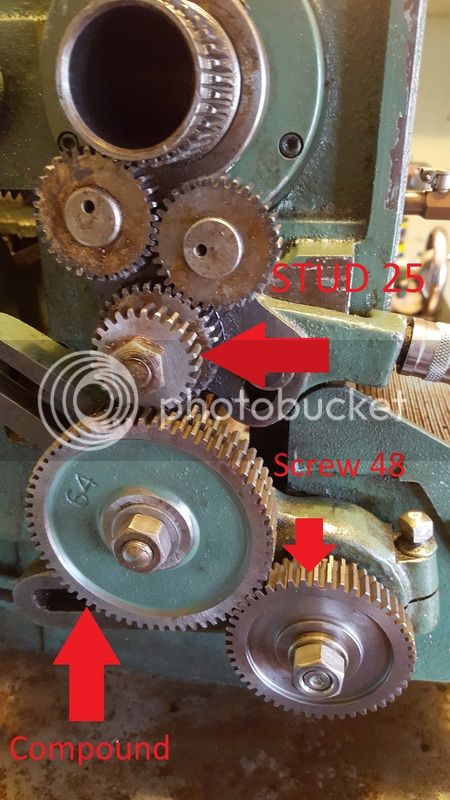 I also made the assumption that if I use the same position each time on my metric thread chasing dial I'll hit the same spot each time.
Here's the TCD chart 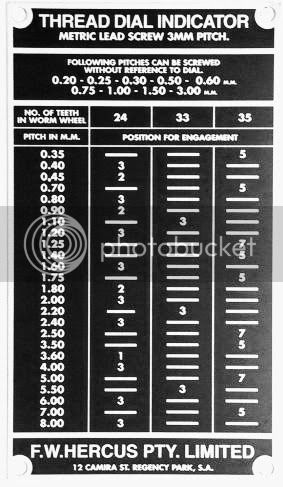 My first pass was indeed 12 TPI 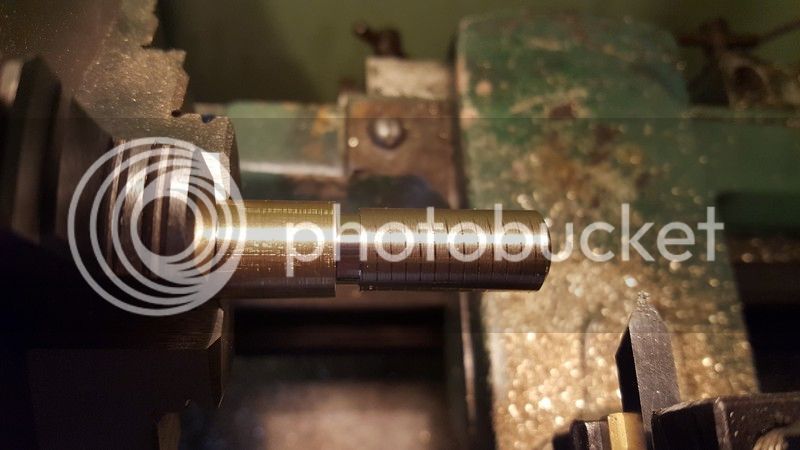 But after the initial pass, very incrementally at the same pitch, the cut each time was very close to the pass before it. It wasn't obvious until 4 or 5 passes as I was cutting light. After further passes I could see the thread was "disappearing" as it went further and further.
I used position 3 on the thread chasing dial as the gear box was to be set at 1.2 so I chose the same positon on the thread dial. It seems a very small error between the metric and the imperial was compounding.

So any ideas? where is the error that caused the same pitch but incremental position change on the work?

My instinct is the metric thread dial which has 3 gears in it to choose from, but I can't explain exactly why or how to make the choice that will solve my problem.
Last edited: Oct 14, 2017

You cannot use the threading dial when you are transposing from metric to imperial or vice versa. You need to leave the half nuts engaged. There is a partial work around if you are interested...

You are following the rule of keeping that half nuts engaged, BUT you are releasing them for just a moment to stop the tool, then re-engaging the half nuts in the exact same position they were in previously, in the same thread dial revolution. If you lose what revolution you are on, or forget the starting clock position, you are screwed... It works just fine, but practice it on scrap before using it on something you care about.

Another thing that can help instead is threading away from the spindle on typical threading jobs.

So if I understand you correctly in order to achieve this my spindle must not roll to a stop? If I press the stop button the lathe and carriage roll on until a dead stop is achieved. I'm not sure exactly how much but I did try it just to see and I could see a crash coming if I tried it during threading, I don't have a break on this machine.

But threading away from the spindle is probably doable as it doesn't matter if it rolls a 1/4 or 1/2 a revolution after I turn off since there's nothing to crash into. But I guess if I'm using a tailstock centre to support the work them that maybe another thing.

Boris Ludwig said:
So if I understand you correctly in order to achieve this my spindle must not roll to a stop? If I press the stop button the lathe and carriage roll on until a dead stop is achieved. I'm not sure exactly how much but I did try it just to see and I could see a crash coming if I tried it during threading, I don't have a break on this machine.

But threading away from the spindle is probably doable as it doesn't matter if it rolls a 1/4 or 1/2 a revolution after I turn off since there's nothing to crash into. But I guess if I'm using a tailstock centre to support the work them that maybe another thing.
Click to expand...

The spindle can roll to a stop. It cannot nun for long after releasing the half nuts or you will lose where to re-engage it again in the exact same spot of the same revolution. If you just practice releasing the half nuts and turning off the spindle in quick succession on a practice job, you will have no trouble. Get it wrong once and you will have to find the cut again manually, not a good thing when you are nearly done with the thread.

Not that I didn't believe you but I wanted to see it visually. I came across this youtube which demonstrates exactly what you advised. So thanks for the assistance. This is going from imperial to metric.

Well it ain't perfect but I think I can, with practice, make it workable. 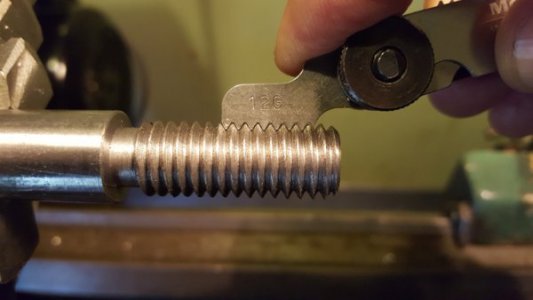 Thanks for your help Bob.
Last edited: Oct 29, 2017
You must log in or register to reply here.
Share:
Facebook Twitter Reddit Pinterest Tumblr WhatsApp Email Link
It can take up to an hour for ads to appear on the page. See our code implementation guide for more details. If you already have Auto ad code on your pages there's no need to replace it with this code
Top
AdBlock Detected