I have been using the Tormach TTS family of tooling for many years now to preset my tool lengths off of the machine and allow for quick tool changes. With my recent addition of a pneumatic drawbar, this will be even more helpful. The issue is that Tormach's pricing on the genuine TTS tooling system has gotten a little crazy. Last time I checked, they wanted $32 for a setscrew endmill holder and $50 for an ER20 collet chuck. I have found a Chinese supplier who ships from US stock.

I spoke with Mike Li at IGStool.com (sales@igstool.com) and his current offering for TTS compatible tool holders (ordered directly from him) is:

I've been using these non-ATC ones for a few years (not sure if I got them from him) and have been happy. I don't have an ATC so it wasn't a big deal. The ones I have have runout between .0005 and .0025. The low runout ones are pretty good, but the high runout ones are only good for roughing.

Mike stated that if any chucks were found to have runout exceeding their stated tolerance (<0.01mm = <.0004") they would replace them with new units from their US stock.

I am going to order a few of the ER20 ATC chucks and make sure I get ones with acceptable runout. I will probably then use these most of the time and use my old ones for less accurate tools.
V

What is the sellers store name on ebay? Is it cncmachinetool?
M

Yup, that is correct. Just as a word of caution/information. I placed an order for 10 of his TTS ATC compatible ER20 collet chucks. I was quoted shipping of $42. When I questioned him on the matter he stated that they pay $35 to ship them DHL to the US and an additional $7 to ship USPS to me. This is actually pretty understandable, but it seems where many would include their distribution costs in the price of the item, this seller incorporates them into the shipping costs. At the end of the day, it would all add up the same but certainly catches you off guard. Also explains why the shipping costs on his ebay listings double from the 5pc. set to the 10pc.

So with this the final cost came out to $212 which is 47% of the pre-shipping costs of genuine Tormach ones in today's prices. I'm going to go through with the order I think, if nothing else to share my experience on these holders. I have not found an up to date review on these since 2012 or so.

Here is a source for Tormach TTS clones. They aren't as cheap as those above but They are about half the price of the Tormach chucks. I bought four of them about five years ago and have no complaints. Their runout is equal or better than Tormach's. You may be able to get a quantity discount if you ask.
http://www.4gt.ca/darkon-er20-atc-precision-chuck/
M

Thanks RJ. I will consider those as well. Right now I'm in the more is better mood, but I may want to start buying ones with guaranteed accuracy.
L

Novakon still has some of the 10mm shank set screw TTS type holders available for 10 bucks. I opened up some of their 6mm holders with a carbide drill and reamer to both 1/4" and 3/8". Great price if it falls into the size range of tooling you want to use, or can modify it to. 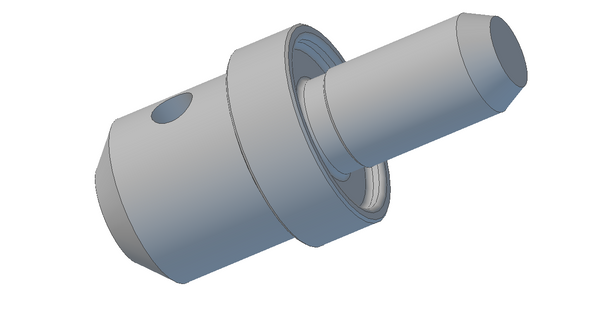 No chucks in yet, but I did get in a new Techniks 1/4" Precision ER20 collet and WOW what a difference compared to the ebay collets I was buying before. It has a mirror polish on all the faces. I installed it into a chuck which had around .0003" TIR and inserted a 1/4 tool measured at 1" from the collet face. Measured TIR was .0002". I've never put a set of toolholding pieces together so precisely.

I plan on using this as a second test on the new chucks to compare runout. Delivery should be this week.

As a note, I went back to my emails from 2015 and found the purchase receipt from cncmachinetool (Pictures watermarked Bsello168) for my 10 ER20 chucks priced at $100 + $60 shipping. I will measure their runout as well and compile it as a list for everyone.
M

OK, chucks made it in last week. I have mixed feelings about the quality of the product, but I don't regret buying them. Here is my best attempt at an unbiased review. I will make some comparisons between the Tormach TTS tools I have as well as my previously purchased non-ATC chucks.

Shipping and Packaging: Tools arrived within 3 week days from me placing my order via USPS. They were placed inside a double bagged padded Priority Mail envelopes. Each chuck was wrapped in a plastic bag with rust inhibitor and then inside a telescoping plastic tube that tools usually come in. I was a little concerned about damage due to the soft packaging, but there were no issues.

Appearance: The chucks have a nice general fit and finish. The black oxide is dark and even and the machined surfaces of the chuck body are nice. The shank, collar, and OD near the ATC groove of the tool is ground with a fine finish. My previous import chucks had a rough grind to the collar that hits the nose of the spindle, but these new chucks were as smooth as my Tormach tools. The body, threads, and taper of the tool appear to be hard turned. This made me nervous, but shouldn't immediately disqualify precision since hard turning can be as accurate as grinding if done right. The taper had microscopic machining chatter marks (the kind that looks like a mirror shine until you pull out a magnifying glass) but certainly not anything significant enough to cause issues. The taper is smoother than the ground taper on my other imports, but I don't have a Tormach ER chuck to compare against. The threads are burr free and have no chatter.

The collet nuts have a lower quality black oxide and the information is laser engraved on the face. The threads and taper are again hard turned and look quality. Two nuts had poor surface finish/scoring on the taper (likely from a broken tool during manufacturing) and were set aside to be discarded.

Hardness: I used a fine cut file on the back of the holder, near the taper, and on the nut. The file skated across the surface without really biting but did not feel glass hard. I would loosely guess a low to mid 50's Rockwell C scale. A single nut had 5 hardness test dimples present on the face. I did not receive a chuck which had witness marks from a hardness test.

Taper Runout: Chucks were tested by rotating the shank in a Vee Block with a .0005 dial test indicator mounted magnetically to the block. I would have liked to use a .0001 dial indicator, however I did not have a way to measure the taper with this. An extra vee block was used to weight the shank down into the Vee to prevent error due to uneven pressure during measurement. The face of the collar was firmly pressed against the side of the Vee block during the test. This is necessary to keep the indicator in the same location in the taper, however any error in the collar grind will falsely show up as runout in the taper (due to axial motion of the chuck). Chucks and nuts were serialized. Runout was measured at 3 locations within the taper and an average is reported below:
Assembled Runout: Chuck assemblies were tested using a Techinks 1/4" Precision (.0002" TIR) ER20 collet and a 1/4" carbide dowel seated to full depth in the collet and measured at 3xD (0.75") from the face of the chuck using a .0001" Dial Indicator. The two nuts which were improperly machined were not tested to prevent damage to the collet. Additionally, chucks 7-10 were not tested due to the excessive taper runout. Each chuck was tested with each nut to find combinations that minimized runout. Understand that at least .0002" (if not more) uncertainty in measurement is introduced by the collet, wear on the collet, and the carbide dowel. Chucks were tightly to roughly equal torques, but I do not use a torque wrench, so some uncertainty is introduced there.

Runout varied from .0003" to .0026" with an average assembled runout of .0013". This leads me to believe that either the threads on the collet chucks, or the nuts have machining errors which cause the taper in the nut to assemble off center of the taper in the chuck. I was able to match nuts to chucks 1-5 which gave the following runouts:
Repeatability of these matched chuck assemblies unfortunately is not very good. For example, reassembling Assembly 1 yielded the following:
Customer Service: I contacted the seller of these chuck and stated that I had 5 units which did not meet their stated tolerance of 0.01 mm TIR. I explained my measurement method and the results I got. The seller was concerned that my methods may have introduced error in the measurements which was the source of the excessive TIR, but offered to send me 5 replacement chucks immediately. I have not yet received these in the mail, but I am very happy with this outcome.

Closing thoughts: All in all I am happy with the purchase of these collet chucks since my expectations were set reasonably. I have 5 chucks which I can (with a little trial and error) assemble within .0005" or so TIR. For me, having more TTS tools was more important than having 2-3 very precise chucks since I can create a library of pre-assembled tools that I can add to my CAM software. Since I won't need to take the chucks apart nearly as often to swap tools in and out, I can afford to take the time to assemble them for minimum TIR.

If you want less expensive TTS ER20 chucks ($20/ea vs $45/ea) and are willing to take the time to inspect the product and deal with some higher TIR chucks, then I would recommend this product.

Got the 5 replacement chucks from the post above. They are completely different from the first 10 as far as physical appearance. They are about 1/8" longer, have more black oxide, a thinner contact ring on the collar, and ground tapers (rather than hard turned). I think the physical appearance is a little worse than the other 10, but all ran true within .0003 checked at 3 places in the taper. I'm super happy. So now I have 24 ER20 collet chucks with maybe 6 or 7 that are only good for drilling or roughing tools.
You must log in or register to reply here.
Share:
Facebook Twitter Reddit Pinterest Tumblr WhatsApp Email Link
It can take up to an hour for ads to appear on the page. See our code implementation guide for more details. If you already have Auto ad code on your pages there's no need to replace it with this code
Top
AdBlock Detected