Is this complete? Mill

Seen this posted and thought about going to look at it. Seems to be missing some parts. What should I be lookout for? 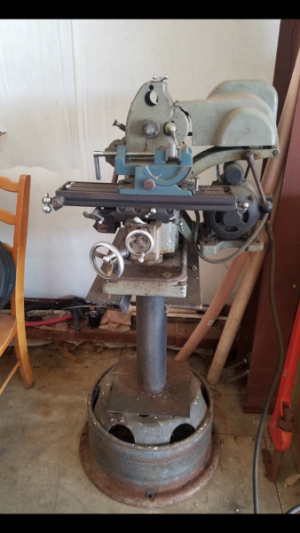 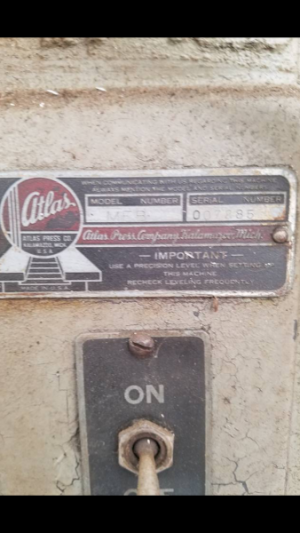 No overarm support (or whatever it's called) the piece that holds the outboard end of the cutting arbor. You should be able to download a parts list (diagram ) for that machine. It might be a bargaining point.

The vise looks too tall to be useful on the mill. The Z axis is shown in its full down position - there is not much distance to the spindle.

Missing are the cutter guard, support arm, arbor support, arbor, and I would bet the arbor driver. However, the two lock handles for locking the support arm in place are visible on top of the head. They are often missing. So you may find the other four parts lying around somewhere. And it is relatively unusual in that it does appear to still have all of the belt guards. Usually those are missing.

As best I can make out, it is an MFB. And I think that the serial number begins with 007, which agrees. There were 12 models of the mill made, M1, MF and MH through M1C, MFC and MHC. The M1 did not have power table feed. The MF did. And the MH had lever operated table lift and traverse.

Downloads has several versions of the Operating and Parts manual, with MMB5 probably being the preferred one. Access to Downloads requires Donor status.

Incidentally, I don't know why I never noticed it before but none of the parts manuals seem to show either the arbor or the arbor driver. Cleaned up Factory drawings in Downloads includes drawings of those, plus a lot of other lathe and mill parts.

None of the obvioously missing parts are show stoppers. If you do decide to pursue it, I would carry with me a printout of MMB5, an oil can and some grease and after confirming that it is bolted to that abysmal stand and not welded to it, lubricate everything before test running it. If you do buy it, leave the stand for the owner to deal with!

Here's what I found for "MFB" in our downloads area:
https://www.hobby-machinist.com/search/73216/?q=MFB&t=resource&c[categories][0]=37&c[child_categories]=1&c[title_only]=1&o=relevance

This document is likely the most useful, it shows some complete pictures, exploded views, parts and operating instructions:
https://www.hobby-machinist.com/resources/atlas-mill-bulletin-mmb-1a-mfb-m1b-mhb-compressed-pdf.2757/

There may be more documents hidden in there that I just didn't find.....so:
Here's a link to the general Atlas downloads section:
https://www.hobby-machinist.com/resources/categories/atlas-craftsman-dunlap-aa.37/

So what is a decent price on this?

Chris_V said:
So what is a decent price on this?
Click to expand...

Probably go for more though, are you really looking for a horizontal mill or did it just come up on Craigslist?

It's a nice thing to get working but if you're really wanting to make stuff I'd hold out for a decent vertical mill. Have you contacted the seller to see if he has any parts stashed away? As others have said it could be quite a bit to get the missing pieces so any offer needs to take that into account.

I'd get it if I could do so cheap; if he thinks it's gold plated I would pass though.

It just came up. Not really looking for one. That all he had for it.

Is he trying to sell it? What's his asking price?

The reason that I recommended the MMB5 even though the earlier one actually does cover just the M?B is three-fold. The only significant differences operationally between the MFB and MFC are the added outboard arbor support, and the lack of a cutter guard. The MMB5 is the most extensively cleaned up one. And knowing whether or not a particular part is the same on the MFB as on some or all of the other models can sometimes aid in finding one. Because the average seller on eBay or elsewhere quite often doesn't know or at least doesn't list the actual part number but does usually say what model a part came off of.
You must log in or register to reply here.
Share:
Facebook Twitter Reddit Pinterest Tumblr WhatsApp Email Link
It can take up to an hour for ads to appear on the page. See our code implementation guide for more details. If you already have Auto ad code on your pages there's no need to replace it with this code
Top
AdBlock Detected