JimDawson said:
I can get away with taking the speed value from the VFD because the system is direct drive now.
Click to expand...

This should work well, are you displaying RPM on the display screen or a separate digital RPM display? I often set up the VFD display with a multiplier for the frequency or motor RPM with a single speed to give spindle RPM, but it will not read correctly when the back gear is engaged. Using a remote display, there should be a speed voltage output on the VFD that can be scaled in a digital display or to an input, I use a resistor divider network to set the range for different mechanical speed ranges, assume this can be set in a computer interface. Alternatively for a simple stand alone digital display the $18 eBay tachs work darn well, and simple to install. System is looking really nice, will be super quiet vs. what you had.
Last edited: Aug 14, 2016

mksj said:
This should work well, are you displaying RPM on the display screen or a separate digital RPM display?
Click to expand...

Here is a screen shot of that section of the screen. 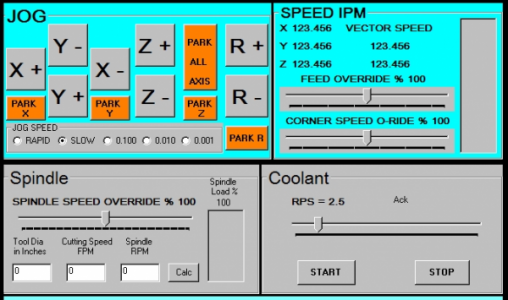 Given all of the trouble I had with the frequency pulse output from the VFD and after a little reflection and some scrounging around on my shelf it turns out that I have 2 Photocraft heavy duty industrial, hollow shaft encoders that I bought for another project about 10 years ago and never used them. They are 50 PPR and rated at 6000 RPM. One of those will be perfect for the RPM feedback! And with the spring mounting plate I can connect it right to the motor shaft.

For the back gear gear ratio issue, I could just put a microswitch on the lever to tell the computer that it's in back gear, or put a button on the screen that kicks in a different scale factor. 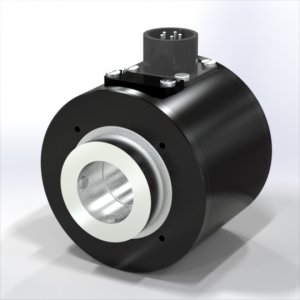 Slick. My new mill with a DVS head has a switch for the back gear, which kills the drive and rescales the display range, the RPM is taken directly from the VFD as opposed to a sender. Really looking nice, with the new belt drive it should be so smooth.

Here is the driven shaft finished and bolted into place 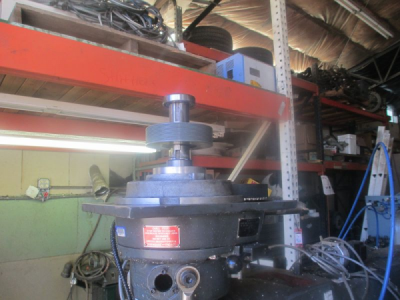 For those of you who have not read through the entire thread, I installed the encoder to use as a tach because the frequency output from the VFD was not stable. I had it on the shelf and decided to put it to good use. The speed reads out on the screen and by checking a checkbox it reads correctly in back gear also.

And the encoder mounting system. Since the encoder is fixed to the motor shaft, the encoder body has to be spring mounted to take up any misalignment. So here is my solution. The motor has to be installed with the encoder attached to the shaft because there is no way to get to the set screws, so this spring mount system allows easy attachment from the bottom. 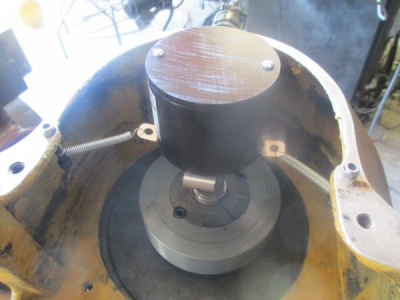 And the assembled view 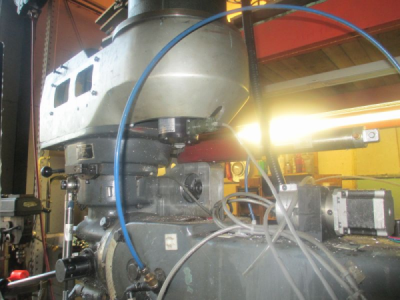 I cheated a bit on the belt tightening system. There no aligning ring on the bottom of this motor so it can slide around on the mount. So I just put in one bolt, rotated the motor around a bit until the belt was tight and drilled & tapped a new bolt hole for one of the other bolts. If it becomes an issue later, I'll change the mounting system. 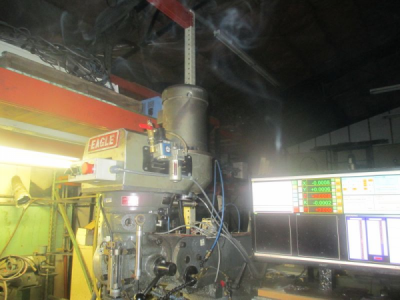 And the new controls. 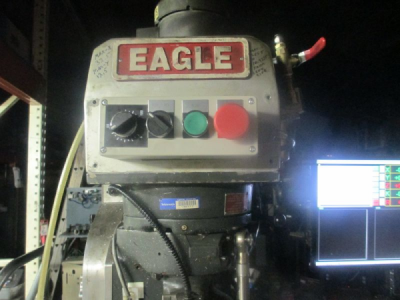 Now I have to cleanup the wiring rats nest. The other problem is that I did not get rid of all of the noise. There is still a noisy bearing in the back gear system, so I'll order a full bearing set and install them later. I need to make some chips right now.

I'm pretty sure not having a brake is not going to be an issue. I dropped it into back gear and had plenty of resistance to do a tool change.

I'm impressed with the new sensorless vector VFD. The torque curve is pretty much flat from 10 RPM up to the motor nameplate RPM of 1725. Up to that point it is in constant torque mode, then it switches to constant HP mode and the torque falls off as the RPM increases, thus maintaining full HP. The new speed range is about 10 to 4300 in direct drive. It will turn 6000 RPM, but I haven't taken it up there yet, I'll get a little time on it first.

I'm going call this one a success!

An update a about 1.5 years later. I have a failing bearing in the drive system and it's time to pull the head and replace the bearings.

Click here to go to the top of this thread https://www.hobby-machinist.com/threads/mill-spindle-direct-drive-conversion.49130/#post-414141

This time rather than pull the mill out its hole, I decided to just pull the head and mount it up on an engine stand to work on it. @expressline99 built a fixture to pull the head using the table, so I decided to try his method. https://www.hobby-machinist.com/thr...ly-top-end-now-both-2hp-variable-speed.57208/

So the last job before teardown is to build the fixture out of some scrap pieces.

First pocket the base to fit the pin 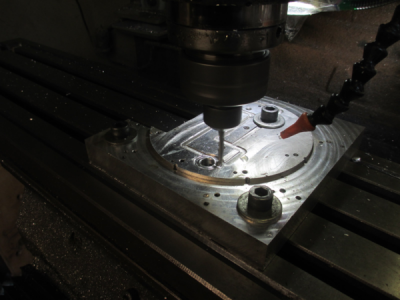 I had the pin sitting on the shelf as you see it, didn't have to do anything to it. 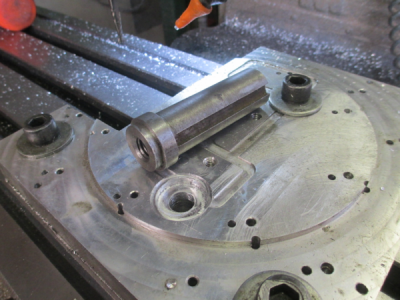 Now stuff it into a 1 inch endmill holder 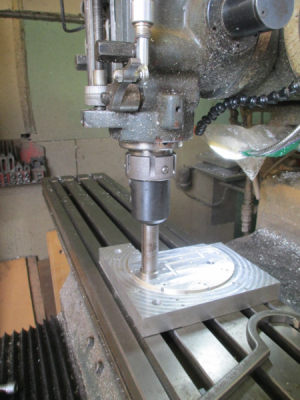 Check alignment and bolt the base to the table 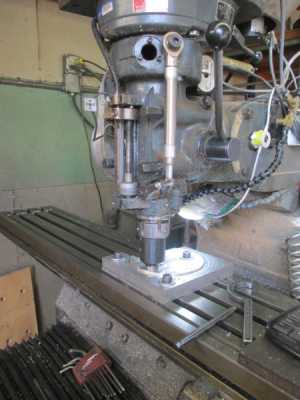 Remove the mounting nuts and carefully start moving the head away from the ram. The weight of the motor hanging on the back of the head was a bit concerning, but as it turned out it was OK. Sag was minimal. 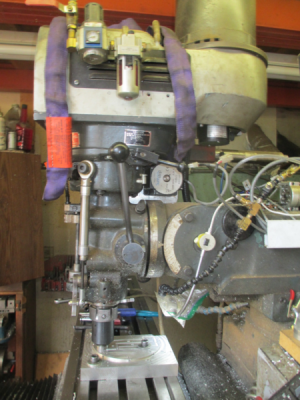 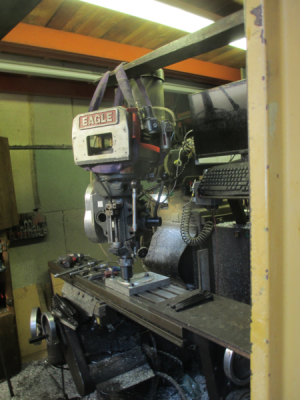 Then unbolt the plate from the table and mount the head on the engine stand. The whole assembly is off of the floor about an inch while removing the motor. With the motor on, the engine stand wanted to tip over backwards. We added about 100lbs of scrap steel to the front of the engine stand to balance it out. 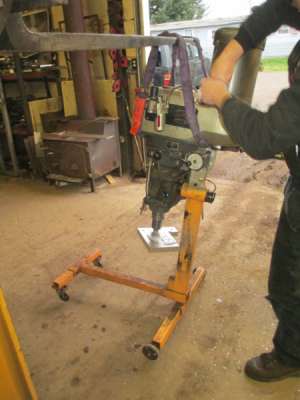 And the head exploded all over the workbench. A forklift makes a great variable height workbench, save my poor old back. Took about an hour to tear it down. I found 2 bad bearings, I'm replacing 4 bearings, the other 2 seem to be fine. BTW, none of the bearings are the spindle bearings, these are all in the drive system. 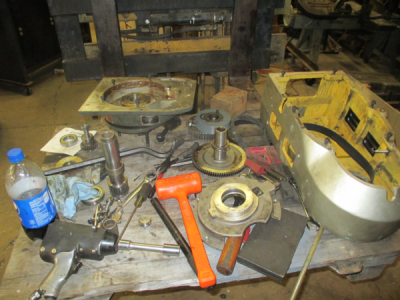 I should have the new bearings today.

I am also replacing the drive pulleys. Going to overdrive the spindle at 1.5:1. After running a 1.5 years at 1:1, I have found that that is not the correct ratio, so I'm going to speed the spindle up and see how that works. The motor seems to have plenty of power to be able to do this, and it will give a better speed range when in back gear.

I'm changing from a poly-V belt to a Gates HTD 30mm timing belt setup. The reason for changing to a timing belt drive is that I am writing the software to do rigid tapping and need the motor solidly timed to the spindle. I see a few broken taps in my future while debugging the software and figuring out how to use it.

My timing pulleys and belt came in today and I finished putting the head together. Not too happy with the amount of noise the timing belt makes, Gates HTD 8mm pitch x 30mm. I hope after a few hours use it will quiet down a bit.

It looks like the 1.5:1 spindle overdrive is going to work fine. The sensorless vector drive gives the motor a nearly flat torque curve from 0 up to 1800 RPM, so the motor still has plenty of torque at low speeds and now I can run the spindle up to 6000 RPM to take advantage of carbide endmills. It now has a useful speed range of about 50 to 6000 RPM in direct drive and about 5 to 725 RPM in low range.

I fixed the timing belt noise. The belt was over tight, loosening a bit solved the problem. Had to add a little clearance to the motor screw holes.

JimDawson said:
An update a about 1.5 years later. I have a failing bearing in the drive system and it's time to pull the head and replace the bearings.

Click here to go to the top of this thread https://www.hobby-machinist.com/threads/mill-spindle-direct-drive-conversion.49130/#post-414141

This time rather than pull the mill out its hole, I decided to just pull the head and mount it up on an engine stand to work on it. @expressline99 built a fixture to pull the head using the table, so I decided to try his method. https://www.hobby-machinist.com/thr...ly-top-end-now-both-2hp-variable-speed.57208/
Click to expand...

Jim your fixture looks nicer than mine I see lots of fun there!

Paul
You must log in or register to reply here.
Share:
Facebook Twitter Reddit Pinterest Tumblr WhatsApp Email Link
It can take up to an hour for ads to appear on the page. See our code implementation guide for more details. If you already have Auto ad code on your pages there's no need to replace it with this code
Top
AdBlock Detected