Any model TL owners on this forum?
I have one circa 1947, and something is not quite right.
it cuts a slight taper while in a collet. I would love to do a full restoration.
the bed shows signs of wear. It does not seem to have hardened ways like the
later TLs. I could really use some advice.

not a whole lot of TLs around. such a NICE machine though. would love to see some pics of yours.

Have you checked the Hardinge Yahoo group? they have a couple TL owners there.
S

Are you referring to the Wards lathe made by Logan?

The Model TL was the precursor of the HLV..
A

I have a Hardinge TL Lathe. Made in 1946. I have not been able to assemble it. Purchased it completely disassembled. Needed new belts. Had been looking for one for several years. My youngest son and I drove to just south of Houston to get this machine. Polishing and cleaning have started.
Life kinda slowed me down a bit.Lost my wife of 38 years about 4 years ago. I have been very blessed to meet a young lady and married again 18 months ago.
Alas my lathe is at my shop and i live 19 miles south now. I spend my play time traveling rather than working on my lathe.Thanks
alabamaed36046

alabamaed36046 said:
I have a Hardinge TL Lathe. Made in 1946. I have not been able to assemble it. Purchased it completely disassembled. Needed new belts. Had been looking for one for several years. My youngest son and I drove to just south of Houston to get this machine. Polishing and cleaning have started.
Life kinda slowed me down a bit.Lost my wife of 38 years about 4 years ago. I have been very blessed to meet a young lady and married again 18 months ago.
Alas my lathe is at my shop and i live 19 miles south now. I spend my play time traveling rather than working on my lathe.Thanks
alabamaed36046
Click to expand...

I have been working on mine (1944 TL) for about 3 months and have a good mentor plus help from JimS, who I "met" on this forum .... I went through same as you in belts and found out, in the process, that the spindle has preload and some things I did not want to take chances with - I went to Amazon and purchased 3/8" Fenner PowerTwist belting and am VERY glad I did ... it is expensive but just take the cap off back of spindle and it is very easy to thread down and adjust, so wound up using them on both spindle to countershaft and countershaft to motor. Being a hobbyist, I doubt I will ever wear them out. Also am using a Teco N3 VFD and that is very nice because you have FWD/REVERSE, speed control, and everything you need right there. I need to make the remote button panel and put the VFD underneath but just have not gotten that far. You will LOVE that machine. The only weakness that I got slapped with was the little gear between the carriage and the feed ... mine had been broken and not replaced with the perfect match ... and then I found out from JimS, who owns two of these, has experienced the same. Other than that, it is absolutely awesome machine. I had a ShopFox and an Atlas 618 before that, and when I moved to the TL, I really felt like I was touching the Big Time ... can't keep my hands off it. Good luck with this project - it will be very, VERY rewarding and there are some amazing people in this forum who will give you good guidance and advice. I could not have gotten mine going without help from these folks! MOVE yours to where you can keep your hands on it! It is worth it!!!! Good luck and have tons of fun!!! Hopefully I have given you some ideas here, just as others have done who have gone this way before. Do you have pictures of yours? {By the way, CONGRATULATIONS on your marriage .... my first one was a bust, but if I had not had the first one I would not fully appreciate my wife of 25 years now!} doug
S

Welcome to the TL world! When I moved from my highly modified South Bend (built on D-day ;-) I felt like I finally had an adult lathe!
One of the really amusing things about my lathe: I bought it from Mr. Stark, of Stark Industries! Unfortunately his first name wasn't "Tony"!

If anyone has a TL that's in pieces, it would be HUGELY helpful if you could take pictures of the pieces, ideally with a machinist's scale in the photos! As we have all discovered, Hardinge never made an actual maintenance manual for this gem. I've promised myself that I will measure any parts that I take off...

Right now I'm working on a taper attachment for mine. I bought castings for the slide and slider, but the mounting bracket you need is significantly different from the HLVs. And, for extra fun, I installed a DRO on mine, which uses the upper edge of the taper attachment track AND hangs down a bit from the cross slide.

If anyone is interested, I recently made a 3D printable Hardinge spindle nose with a mounting flange. Print a few and you can safely mount your chucks on a wall! I might have collected enough chucks and bits that I was running out of room inside the lathe.

I had promised to post some pix of putting the shop together over a year ago and just now getting it done - and in the process wound up restoring a 1957 JD420c bulldozer ... I have an album posted if you guys want to see what I have gotten done so far ... I think (dangerous) I can post some pix here? Anyway, it is one of those things that when I get one thing done, 2 more are caused to be needing done. Still having some issues with adjusting the TL - Interstate 5 in CA took it's toll - but slowly bringing it in line ... getting lots of help from you guys! Thanks! 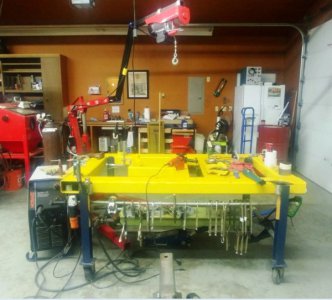 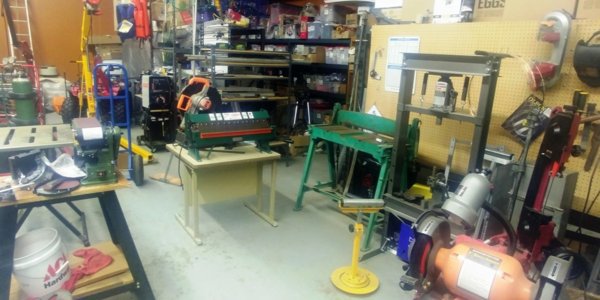 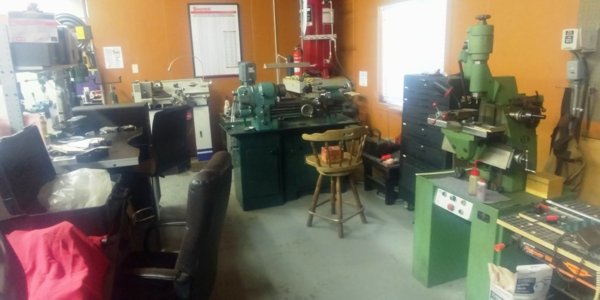 Nice shop there. Really like the jib and winch on the engine hoist above the welding table. It looks like you have lots of room in your shop.
Nice dozer as well

Great space you have there. Is that the start of a plasma table? The dozer is very cool. Mike

Thanks Guys - I use a plasma cutter but the table is set up multi-purpose ... wanted lots of open space within the frame so I can use various clamping ideas as I need them. I am also looking for some edge-on expanded steel and was going to put angle rails inside so I could drop in the expanded steel if I had to do a lot of plasma cutting, but could remove if something else came up. I have 2 of those cranes - one is rated full 2 ton but the one over the table is good for about 650# because I wanted to get the height up and as said, use mostly to help with placing something in or on the table ... I got here DEC '15 but took about 3 months to even get started putting the shop together and I am STILL changing stuff around so I guess I am still evolving. I won't make any excuses except that I have 65 years of ideas that I am sorting through. Appreciate your comments and ideas ... kinda looking for an old Bridgeport/Lagun machine ... Aciera is kool, but is small and no autofeed ... always one more thing, right? Take care and thanks again. (the good news is that my pugs like the recliner in the ham shack so they don't mind coming out to the shop )
Last edited: Apr 7, 2018
You must log in or register to reply here.
Share:
Facebook Twitter Reddit Pinterest Tumblr WhatsApp Email Link
It can take up to an hour for ads to appear on the page. See our code implementation guide for more details. If you already have Auto ad code on your pages there's no need to replace it with this code
Top
AdBlock Detected