Please click on this notice to be taken to the Site Support Forum so you can learn more about what happened, what is being done and post a support request so we can help you get your issue resolved.
S

Purchased a commercially manufactured Hand Tapper a couple of years ago and overall it is a well-constructed unit. The only complaint was the way the tap was held in the adapters and the way the combined adapter and tap was held in the spindle. Installation of adapter and tap in the spindle went well, the removal was the problem. Every time the machine was used regardless of the size tap used it was a fight to remove the adapter. First the tap slipped out of the adapter and then the adapter would not come out of the spindle without disassembly of the spindle, spring clip and steel detent ball. Occasionally I ended up chasing the ball around on the shop floor. Replaced the slotted set screws with more traditional hex socket set screws with minimal improvement.

The modification I eventually incorporated came about from a contributor named Tony Foale’s thread on a sister forum on building a Homemade hand thread tapping machine. His use of two Irwin Tap Adapter’s was an excellent solution to the problem. Tap installation was accomplished with simple hand tightening or loosening.

The Spindle was modified to accept a machined adapter with a set screw spring plunger to act as the detent and then drilled and pinned to the spindle. 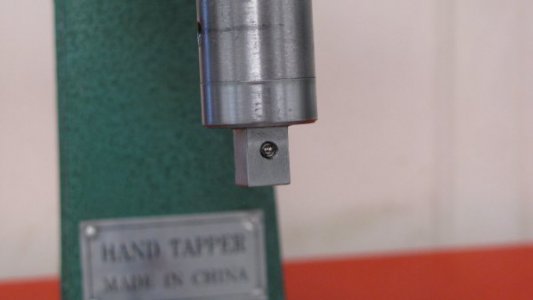 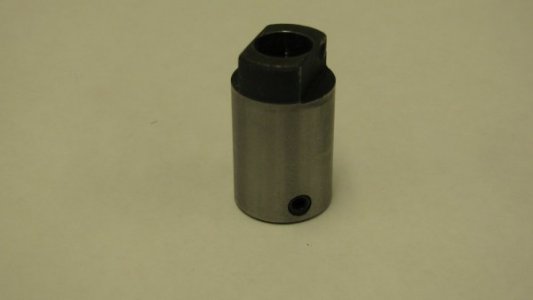 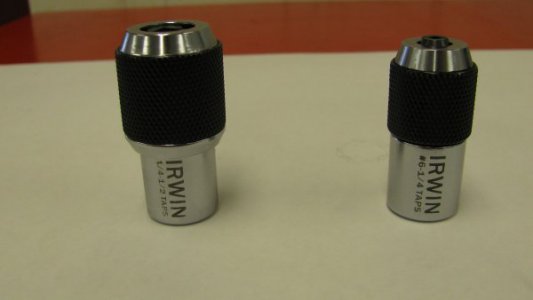 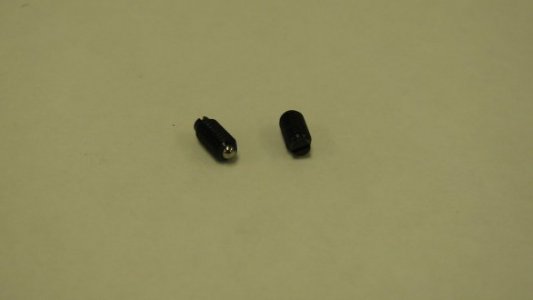 shelly 142
I also have one of these tapping machines and soon found that it needed a lot of reworking to be turned into something actually useful. The first and most obvious problem was the way the taps were supposed to be held in the adapters. Here is an image captured right from the on-line documentation. 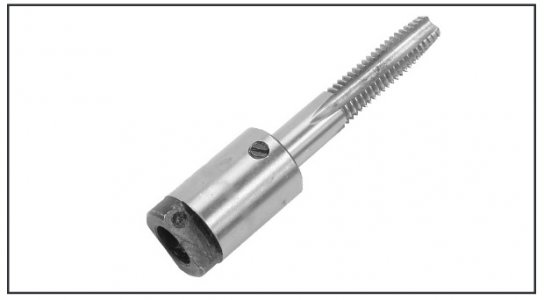 As you can see, they have the set screw binding on one of the flats on the end of the tap. Other hand tapping machines I have used had the tap inserted well into the adapter to nest in a square feature deep within the adapter. The set screw would then be used to hold the tap in place, not to keep it from turning within the adapter. If you look into the end of these adapters, you can see the square area. Other problems I had were tapered finishes where the tap was held concentric in the adapter, so the tap couldn't even reach the square socket. Then the fact that the square socket where the flats of the tap were supposed to nest were so poorly finished, the taps couldn't enter. I had to hone out a lot of the adapters to get rid of the taper, and all of them required working out the corners of the square socket feature for the flats of the taps to enter.

That took care of getting the taps into the adapters properly. Next was when I actually used the machine to tap some holes, a very inconvenient aspect showed up.

The handle for turning the spindle had two grips standing about six inches tall. When turning the handle, the grip not being used would hit my arm and I found I had to change my hand position every turn of the handle to get on the other side of the grip. Here is how I took care of that. 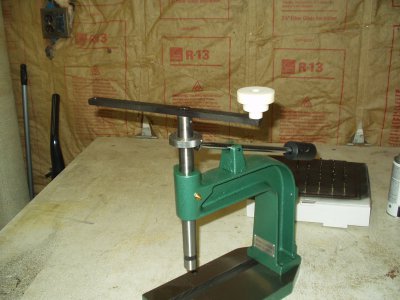 I made a knob that is held in place with a socket head shoulder bolt. The knob rotates on the bolt and can be attached to either end of the handle for more or less torque, depending on what you need. To get this done, I punched the rods for the original grips out of the handle and used the material to make a pair of threaded bushings that were then installed back into the ends of the handle. Problem solved.

Next was the same complaint you had about the detent ball falling out of the spindle when I twisted the spring steel collar out of the way to release the adapter from the spindle. To take care of that, I merely packed the cavity where the ball sits with some grease and haven't had a problem with the ball getting away since then.

You must log in or register to reply here.
Share:
Facebook Twitter Reddit Pinterest Tumblr WhatsApp Email Link
It can take up to an hour for ads to appear on the page. See our code implementation guide for more details. If you already have Auto ad code on your pages there's no need to replace it with this code
Top