Yesterday I was setting up a part on a fixture plate and snugged up, but forgot to tighten, the R/H clamp after dialing in the part. So I drilled the hole pattern, I spotted the dowel pin holes first, then the bolt holes. I was watching the DRO rather than the part, and somewhere in the process of drilling the bolt holes on the R/H side the part moved. Since I was through drilling both the part and the fixture plate the drill bit walked sideways and the holes were about 1/16 inch out of position. The good news is that the dowel pin pilot holes were in the correct position. So I need to move the holes. The holes in the part are not really a problem, they are just clearance, but the holes in the fixture plate need to be moved over.

A pic of the part in the correct position on the plate just for perspective. 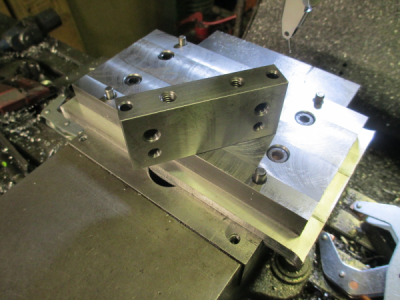 These two holes need to be moved 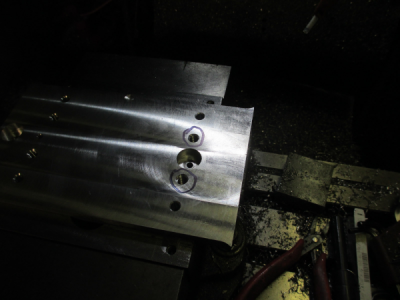 These were tapped at 5/16-18, so I dropped in with a 3/8, 2 flute end mill. An end mill will not follow an existing hole, it will cut exactly where you want it to. You can see how far off the holes are. EDIT: Do not put the end mill in a drill chuck for this operation, use a collet or it will walk off. 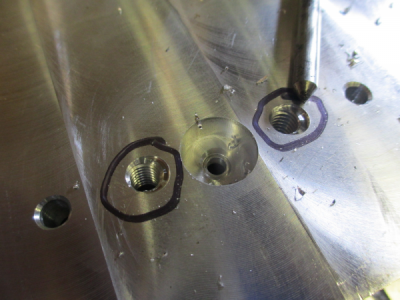 Even after plunging with a 3/8 end mill there are still some threads left in the hole, so I can't drill because the drill bit would just walk sideways. These need to be D&T for 1/2 -13. 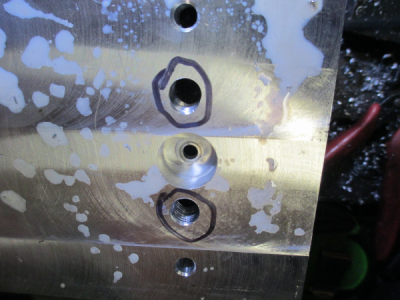 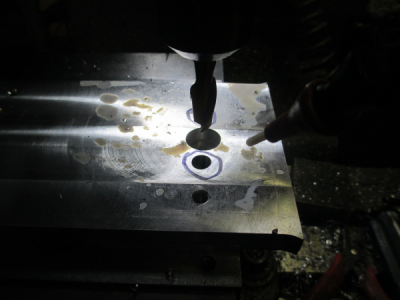 That cleaned up the holes and successfully moved them over. Now I can tap the holes. 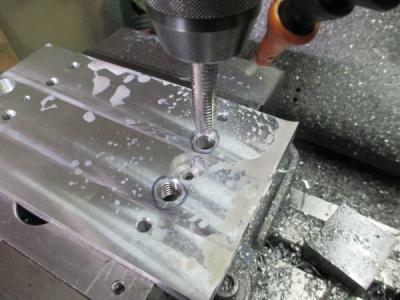 Then it's just a matter of filling the holes back up with something. I could have used a chunk of 1/2-13 all thread or a cut off piece of bolt, but I had to run to the hardware store for something else so I picked up a couple of thread inserts while I was there. So I grabbed a couple of 1/2-13 x ''5/16-18'' inserts out of the box. They turned out to be 1/2-13 x M8x1 metric thread, somebody can't figure out how stock properly. Fortunately I have a good stock of M8 cap screws, and since it's just for the fixture plate not a big deal. I removed most of the thread locker goo from the inserts with the wire wheel, I want to be able to get them back out to use again. 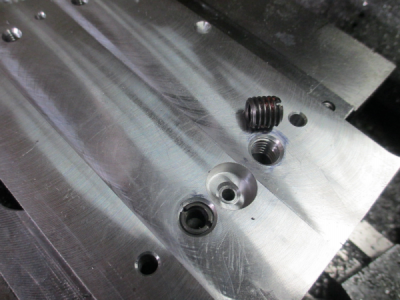 Then I relocated the part on the fixture plate, tightened the clamp this time, finished the dowel pin holes, and then went in and moved the hole centers in the part to where they are supposed to be, using the same end mill plunge technique that I use to move the holes in the fixture plate. This slightly elongated the holes, but it doesn't matter because it's just bolt clearance.

Bottom line: DON'T FORGET TO TIGHTEN THE CLAMP AFTER SETTING UP

"There is many a slip, twixt the cup and the lip"

I wish I had $500 for each time I've done that, both put the hole in the wrong place, and move it that way. I've even used those threading inserts. I could buy a new lathe. PM 1022, if nothing else.

On such a simple part I would have simply started over and made a new one.

Here in Ohio We used to have a product called "hole patch in a roll. " You cut off a piece and pressed it down into position and it filled the hole up. It had different sizes such as for post holes and access holes in walls. . We also had "hole in a roll . When You figured out where to put the hole just cut off a piece and put it into position and presto. there is Your hole. Saves labor but sometimes a bear to store it as stuff falls into it and gets lost.
G

Cool fix. It really gets interesting when you are half a hole off and the insert has to get large, or someone decided to weld the hole shut with ES70 wire.

If you store the "roll of holes" in the laundry room, you will know where to look for those missing socks.

ezduzit said:
On such a simple part I would have simply started over and made a new one.
Click to expand...

Under some conditions I might have also, but I didn't have any more of the 3/4 inch material, and I already had surfaced it both sides and cut the OD to size +/- 0.0005, so I was an hour or so into it. I could have just moved the holes over in the aluminum, but that is going to be the fixture for a mating part also and I already had the dowel pin holes located. Took less time to fix it up than it did to do the write up of the repair, probably took about 10 minutes, maybe a bit longer stopping to take pictures.
W

If you are gonna be stupid, ya gotta be TOUGH!

Somewhere on this site I have read, paraphrasing- being a journeyman machinist is not ever screwing up. Being a machinist is covering your mistakes in such a way that no one knows but you. Many jobs in many of the trades share this principle. Well Done.

Journeymen cover their mistakes, too, you just never hear about them.
W

If you are gonna be stupid, ya gotta be TOUGH!

T Bredehoft said:
Journeymen cover their mistakes, too, you just never hear about them.
Click to expand...

Exactly what I attempted to say. A real, and vital part of being a journeyman.

westerner said:
Somewhere on this site I have read, paraphrasing- being a journeyman machinist is not ever screwing up. Being a machinist is covering your mistakes in such a way that no one knows but you. Many jobs in many of the trades share this principle. Well Done.
Click to expand...

Thank you for the kind words.

I was told by my first boss that it's not a mistake unless you can't fix it. Nice write up Jim. You clearly explained what went wrong and what you did to fix it.
You must log in or register to reply here.
Share:
Facebook Twitter Reddit Pinterest Tumblr WhatsApp Email Link
It can take up to an hour for ads to appear on the page. See our code implementation guide for more details. If you already have Auto ad code on your pages there's no need to replace it with this code
Top
AdBlock Detected