Register Today
Was watching the movie Full Metal Jacket a while back and spotted this cool little support vehicle. After a quick search on the net found out its called a Mule. 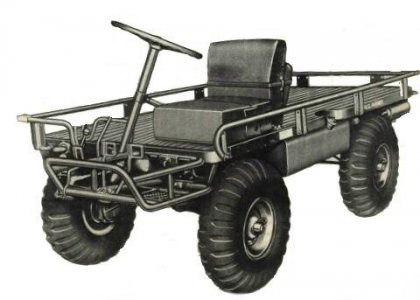 Think one of these would be incredibly handy around the yard for moving me and my stuff. These had 4 wd which would be cool but not necessary for what I want it for. Been mulling it over trying to come up with a drive system, have an old Suzuki trike i thought about repurposing but it doesn't have a rear diff so it would tear up the yard, thought about a golf cart drive but don't think it would have the oomph to haul a heavy load. Then Saturday was over at my buds and he says, have I got a cool thing for you. He found an old Cub Cadet tractor with no engine for free, he wanted the deck for his machine but I can have the hydrostatic drive. The rear end in this thing looks heavy duty, Im sure it will handle the torque but its only about 30 inches wide, standard garden tractor. I want the mule about 4 feet wide and 8 feet long so I'd need to widen the rear end. Found a manual on the net, it shows a needle bearing on the outside of the housing to the axle so Im not sure if that would tough it if I make spacers to widen the stance then put a payload on it.

I could build chain drives down to stub axles to isolate the load but that would be a fair bit of work and one more thing to break.

Picked up an engine on sale today for it (jumping the gun) 14 hp way bigger than I'll need but has electric start, which my lazy self needs. 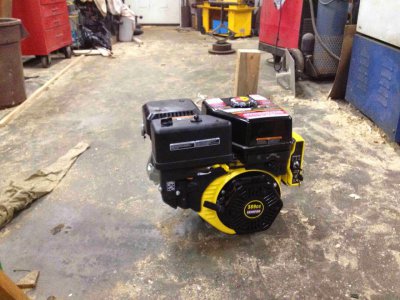 Hope to get the tractor home tomorrow, photos to follow.

Picked up an engine on sale today for it, (jumping the gun again). 14 horse, way more than I need but it has electric start, which my lazy self needs.

Can't wait to see this. You know the drill, Lots-0-Pics! :biggrin:

If it's an older cub cadet, they were bullet proof. My dad had a '74 model you couldn't kill it. we plowed with it and rammed it into snow banks..never broke it. I can't remember how the rear axle was set up on the ends to be of much help. Maybe a picture of the rear end when you get it will jog my memory.
T

I go to the Knob Creek machine gun shoot every year and fellas use these to haul ammo in and out, some charge small fee to take you and your purchases to the truck, the mules are way cool saw plenty of use during Vietnam I think
B

Register Today
The "Mule" was used extensively in Viet Nam by the Marines. They did everything from light transport to full blown assault with a 106 recoilless rifle on them. You couldn't stop those things. Revell made a plastic model kit of them. You might find one on ebay to help you with the frame configuration.

Register Today
Marcel, I think its a model 129, will confirm that when I get it home, if so the net lists it as 1971-74 so could be the same machine. The rear diff looks tough, all cast iron, its just the needle bearings Im worried about if I space the wheels out.
The real thing would be nice to have but its the concept Im after, will probably regret not figuring a way to get 4wd, guess this and the cheap riding mower will be the only thing without. The tractor, atv,Jeep and pickup are 4wd and get used that way often.
Have a surplus of 2 inch square tube Bill so the frame will no doubt be designed around that. Not much in the way of pictures of the driveline on the net, so a model would be a good idea but by the time I got it into Canada it would probably cost more than this will be to build.

We still used the M274 "Mule" up into the early 80's in the Corps, I used to work on them occasionally as a Motor T mechanic. They were lots of fun to drive around the motor pool but you didn't want to hit a lot of bumps since the only suspension was the air in the tires. The steering column could be unclamped and rotated out so that the driver could run it in reverse while walking behind it using a hand to control the brake and gas. There are lots of views available on the net.

looks like it could be a good, fun project!
F

Register Today
My bud delivered the tractor for me today. The thing was built like a tank, ashamed to cut it up, the front grill and front of the hood are cast iron. 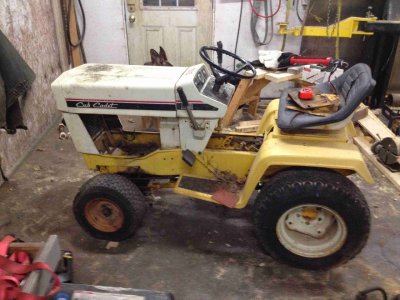 The rear end looks hefty, the wheel stance is actually 36 inches and I want about 42 so 3 inch spacers shouldn't be a problem. 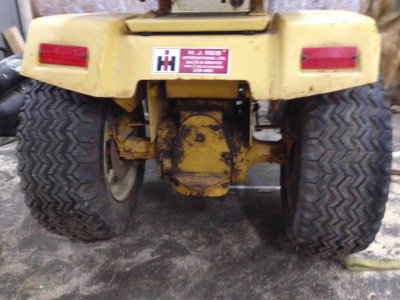 Want to test the hydrostatic drive before I put too much energy into this.
Had to cut away some of the frame and remove the hood and grill to bolt the new engine in. 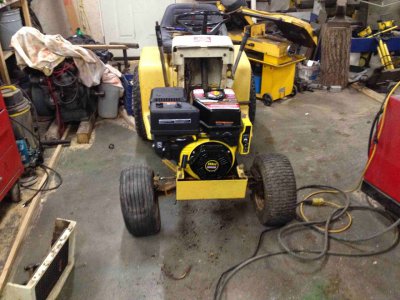 Need to make up a coupling between the engine and drive shaft for the test. 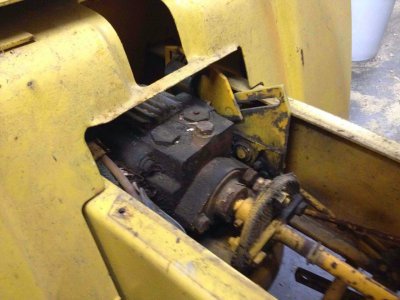 One glitch, the driveshaft ran off the fan end of the engine so I'll be spinning it backwards off the pto end, shouldn't be a problem but the speed is lower in reverse, hope its only accomplished in the linkage.