My First Clock - The Silver Lady

Crossing out the wheels. The second (as in first then second) and hour wheels need to have a little of their mass reduced.
Having never done this before, it was a little bit of a nail biter! But I think they came out nice for a first try. 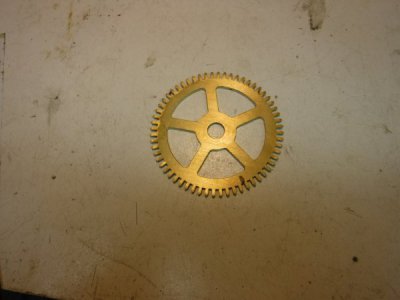 I dialed in the center of my rotary table and then I mounted a piece of sacrificial aluminum to the top of it. I drilled and tapped a 6mm x 1 hole in the very center. 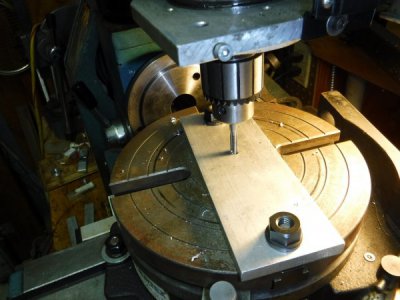 I also drilled two small 1/16" holes opposite each other on the pitch diameter of the gears. I cut off two small pieces of pivot wire and pressed them in the holes. This is so the gears when mounted on the aluminum can not turn. 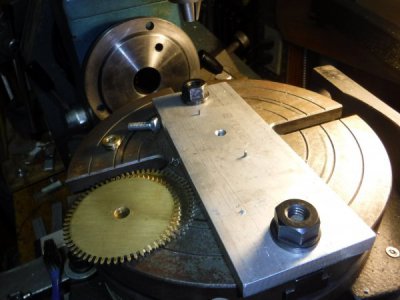 Now don't laugh. I took small piece of PVC pipe and made a ring and I clamped that ring over the wheels. 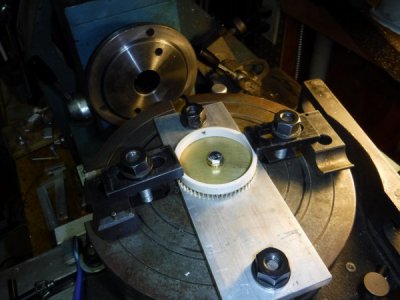 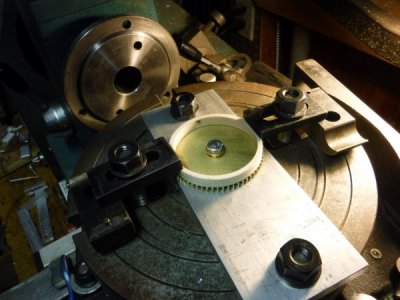 I mapped out a plan to move the RT off to one side, half the width of the spoke plus half the width of the end mill. I would cut the sides of the spokes first. Then using trigonometry and my DRO, I would go back to center with the RT and use the RT to drop the endmill back in the slot and cut the inside of the curve.
I put a 1/8" end mill in the mill and moved to the start of the first cut. 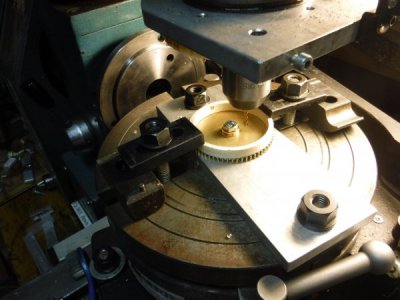 What I'm doing here is cutting the side of the spokes. moving the RT 72 degrees and cutting the side of the next spoke. etc. The endmill was center cutting and I was able to plunge straight down with it. I did peck at it to clear the chips and I could definitely tell when it cut through the top gear and begrudgingly started into the lower gear. 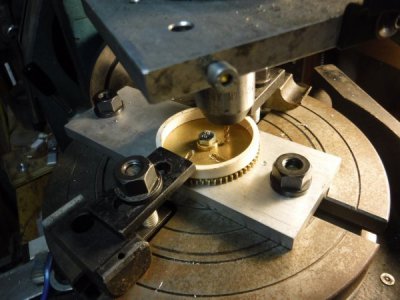 Minor disaster! I broke the end mill off! Why? I think for these five reasons: 1) I wasn't running the mill at the fastest speed possible 2) The end mill was dull, this wasn't its first rodeo. I saw the big old burr it was kicking up above 3) The chips were fouling up the cut 4) It was an inexpensive import mill to begin with 5) It is a small endmill. 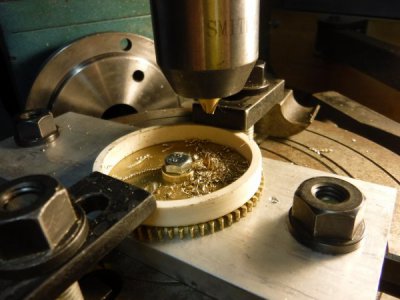 So, luckily, I had another 1/8" mill, I kicked the speed up to max, I used my shop vac to suck the chips out of the way, and proceeded with reckless abandon. 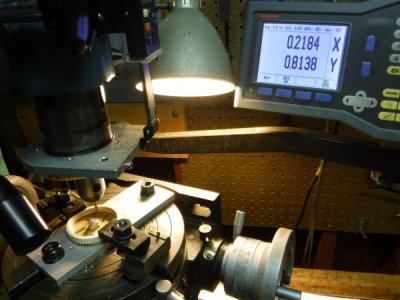 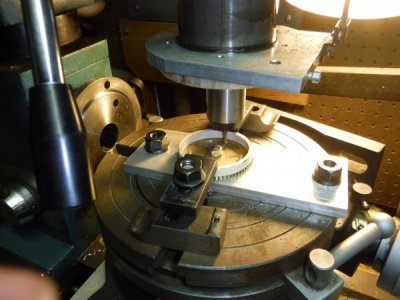 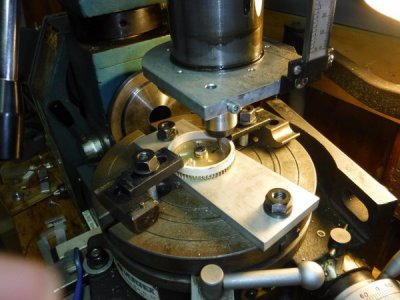 Minor disaster #2! apparently I moved the RT to 211 degrees instead of 216 and made a cut. I'm blaming that on my daughter coming out to the shop and talking to me. Saving grace, the cut was mostly inside the material I was removing anyway. Having never done this, I was going to be fairly conservative with the size of the holes. Plan B! Make the holes bigger and the spokes thinner! 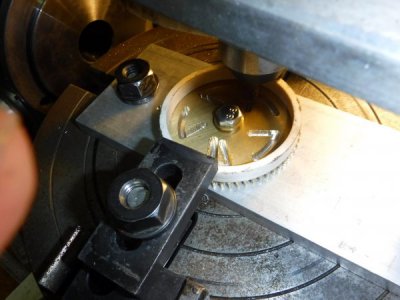 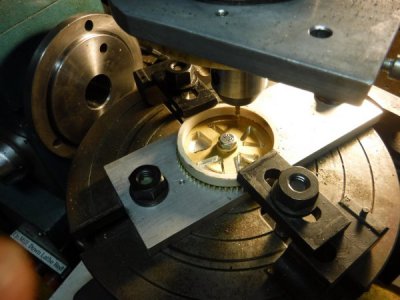 This is DNC. Dave Numerical Control 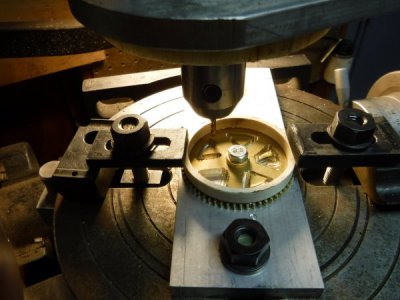 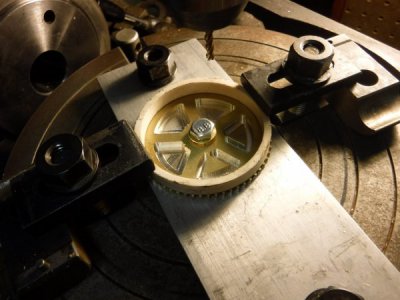 Whew! I made it!! Crop circles? 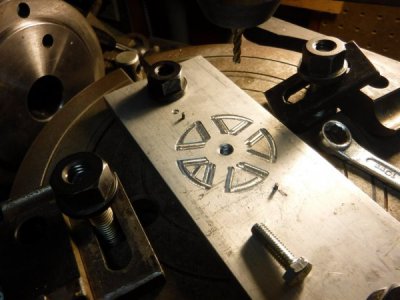 Couple of slices with a piercing saw and a few strokes with some Swiss files.. 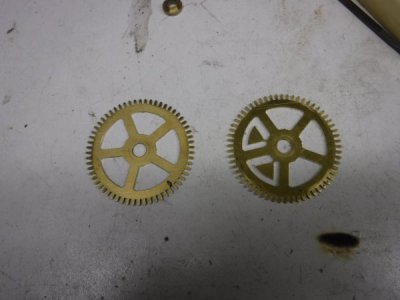 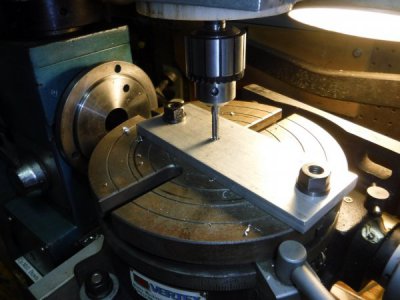 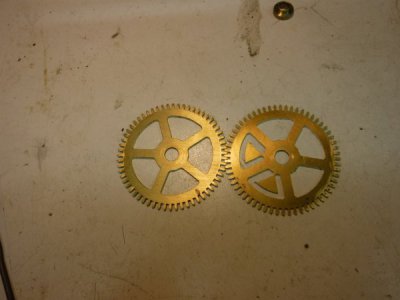 Nice work, and a good save! I also have a set of Dark Lady plans from Brian, but I have not yet had the chance to start on it.
C

Well that’s just one heck of a first try!!!! Lookin very nice! Good idea using a piece of PVC to hold down a wheel for spoking! Thank you for sharing!...Dave

Today I made the click and the spring for the ratchet assembly. 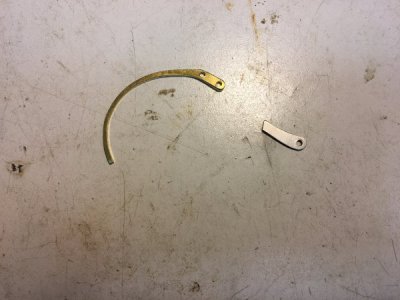 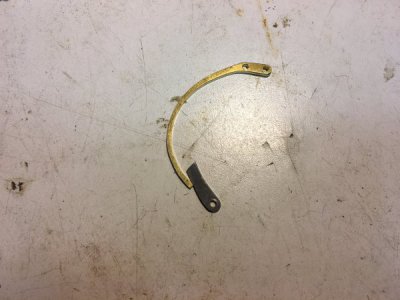 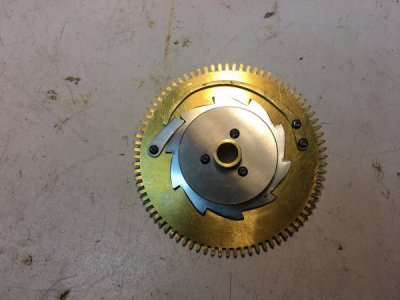 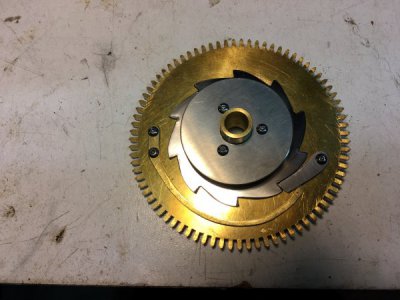 Register Today
Hi Dave.
It's hard to determine the action from the photographs , but it looks to me that the pawl will start to lift on its underside rather than the tip
this will cause the tip to rise clear of the ratchet instead of following the contour, if this is the case just hollow out the underside of the pawl
so just the tip contacts the ratchet.
Great progress, just love your crossing out.
Brian.

Hello there! I let all the parts I made for this clock sit in a plastic box for 3 years... I'd see the box on my bench and think, I've got to finish this!
So, being sequestered.... I've picked it back up. I've got it running. It's not yet telling time, but it's running! I've built many steam engines (several of them are posted here) and it is always fun to get them to run. But, I tell you, this clock ticking away in my shop really gives me a sense of accomplishment! And pride in my work! Now, I seem to be obsessed with finishing it...
Click here for short YouTube video of the clock running.

I'm getting closer to finishing it! I just need to finish the weight and pulley system

Don't forget you can click here to buy the plans I used. This clock is a doable project

Click here for a new video of the clock in motion... 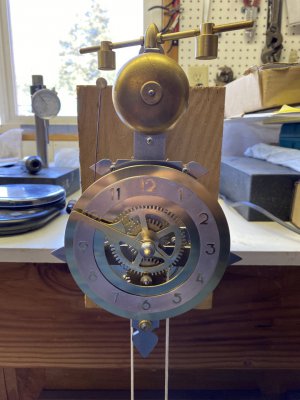 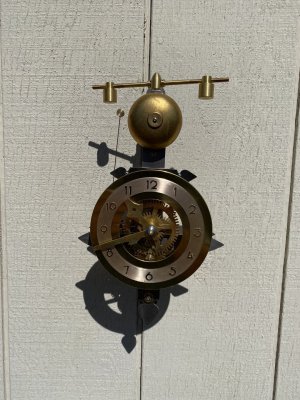 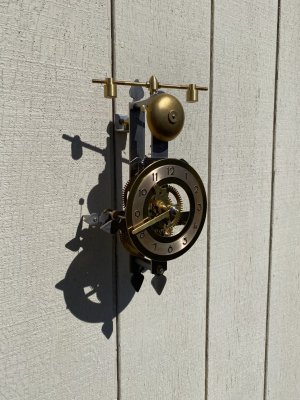 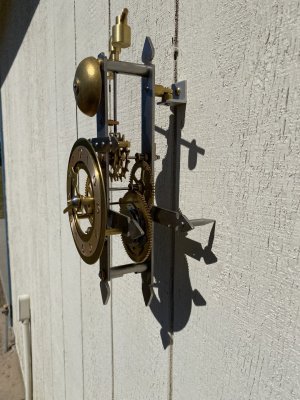 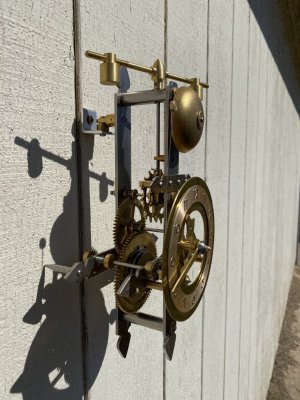 Thanks for the compliment, but Clickspring is in a much higher league!
You must log in or register to reply here.
Share:
Facebook Twitter Reddit Pinterest Tumblr WhatsApp Email Share Link
It can take up to an hour for ads to appear on the page. See our code implementation guide for more details. If you already have Auto ad code on your pages there's no need to replace it with this code
Top
AdBlock Detected