As many of you know I have been in the market for a shaper for a little while, and even considered building one! In the process of looking around, I found a 7B on facebook marketplace that was WAY overpriced. I made an offer, and got no response so figured it was a dead end. Today I got a reasonable (to me ) counteroffer: $1200 which just managed to be my top-limit. SO, I told the seller I'd take it, and picked it up today! Turns out it was a guy's wife making him sell off the few tools he had, so I felt better about my ~50% overpay.

Loading it into the truck was an adventure, but unloading with the Kubota BX pallet forks made unloading super easy! I got it into place, and snapped a few pictures. I ended up hitting it with WD40 spray and wiping it down, as it is pretty dirty. I also need to make a vise at one point, but I probably have to buy steel to make it happen: 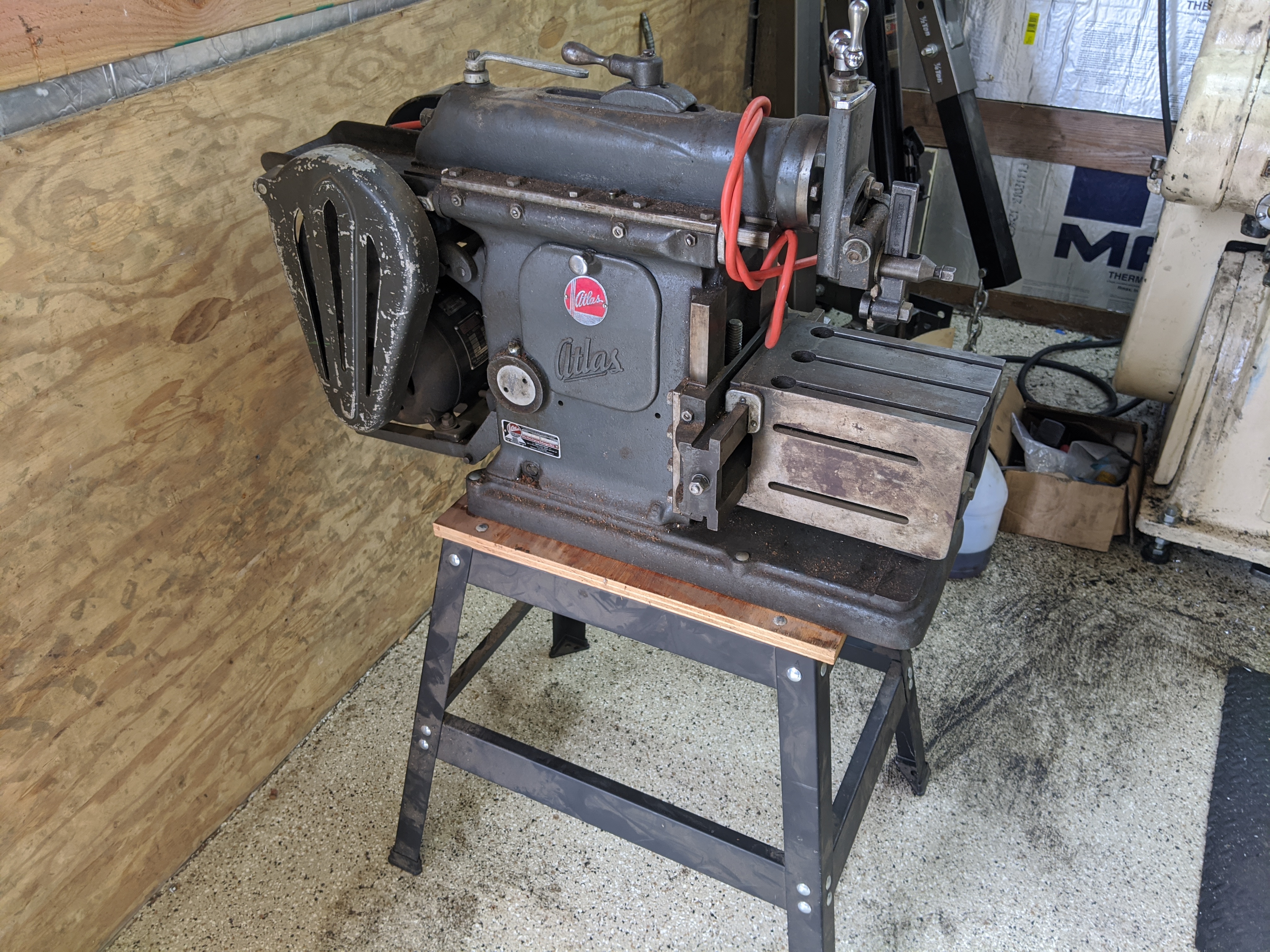 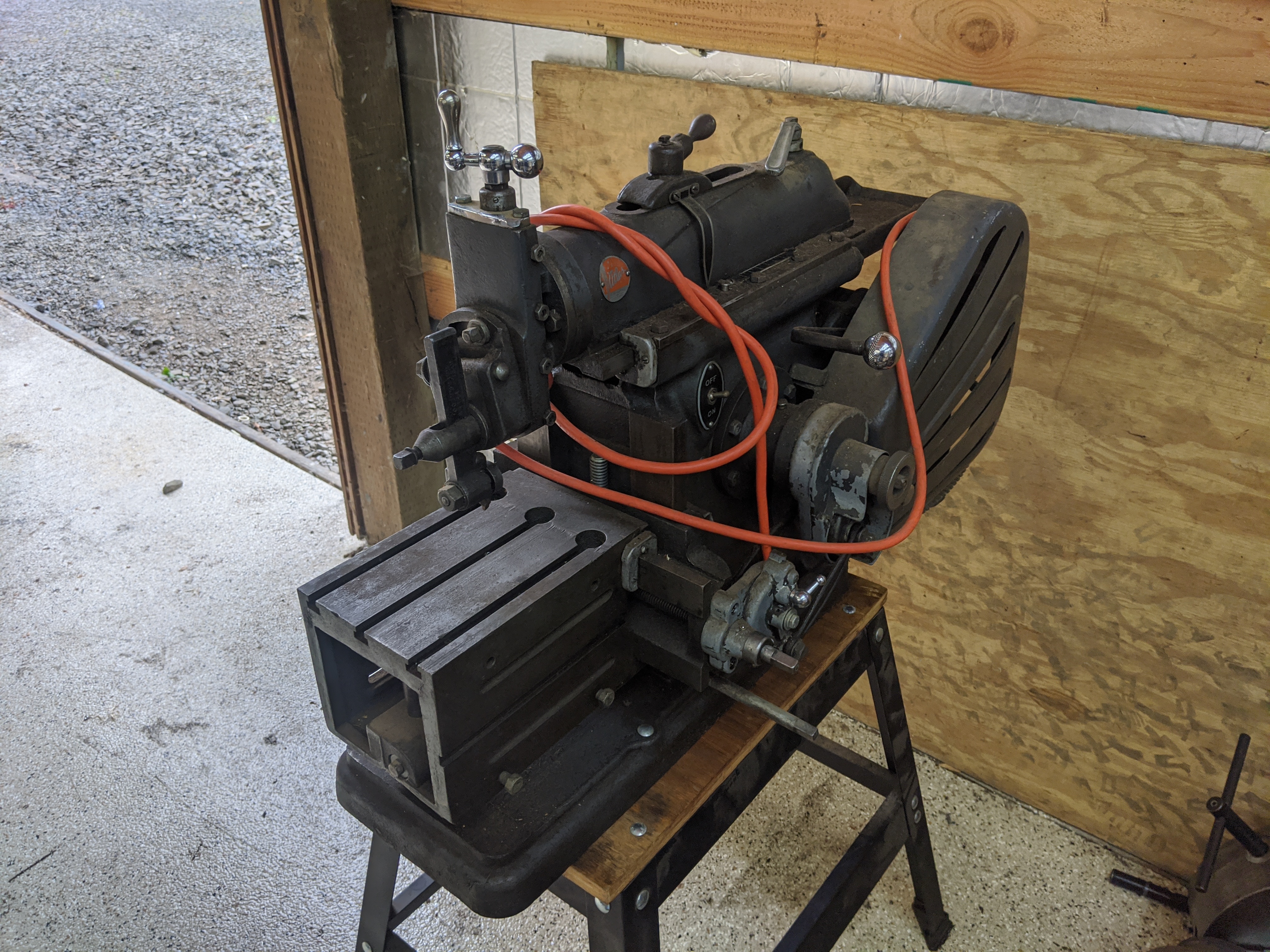 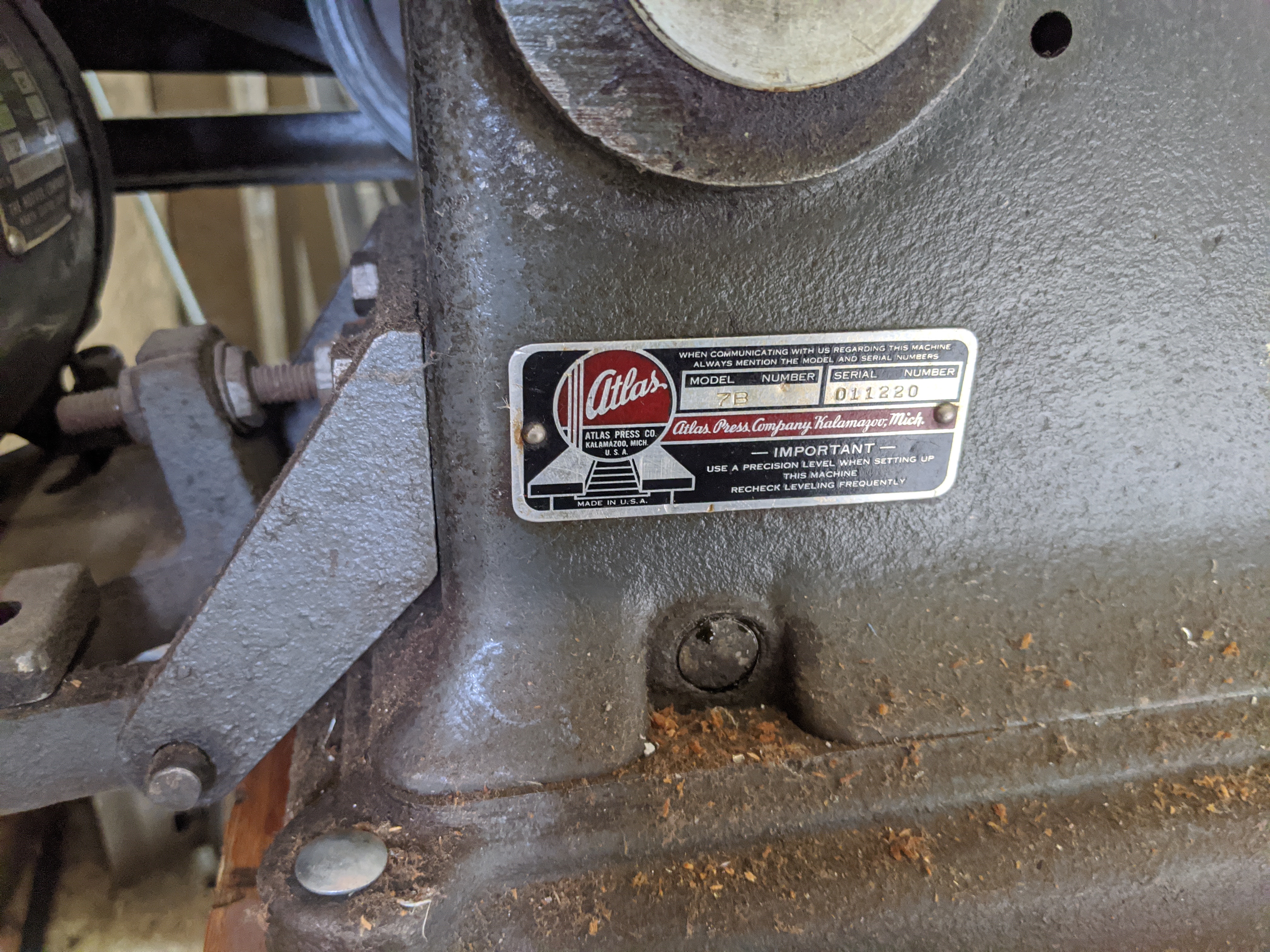 While cleaning, oiled everything that looked like it could use it, plus oiled some other things fairly indiscriminately. The zerk above the atlas plate wouldn't take any grease, so I might end up disassembling and cleaning that to add fresh grease.

The table itself looks like it has been shaped with the tool, but not all the way back. At one point I might see if I can indicate/square this up on the surface grinder and clean it up. 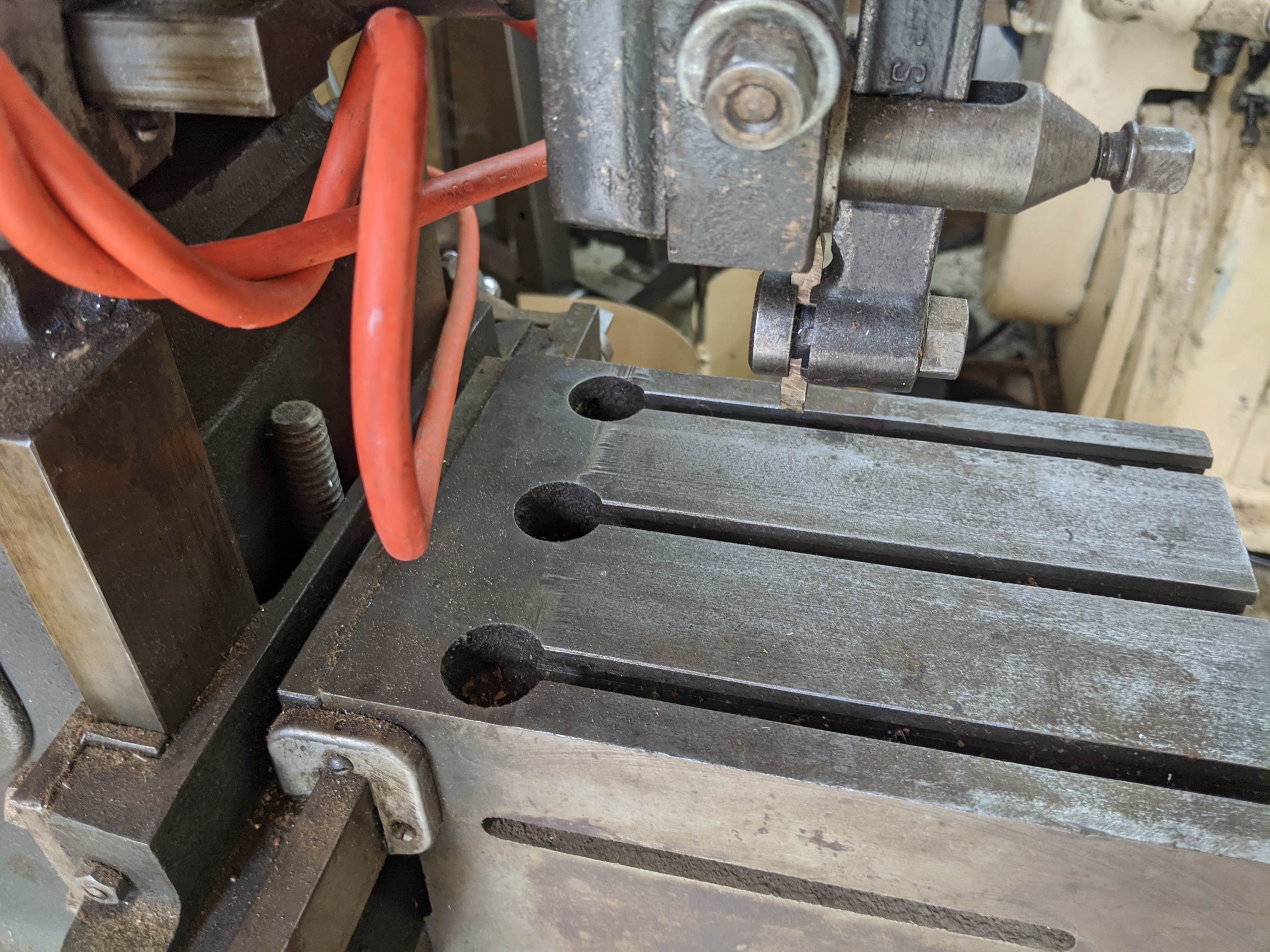 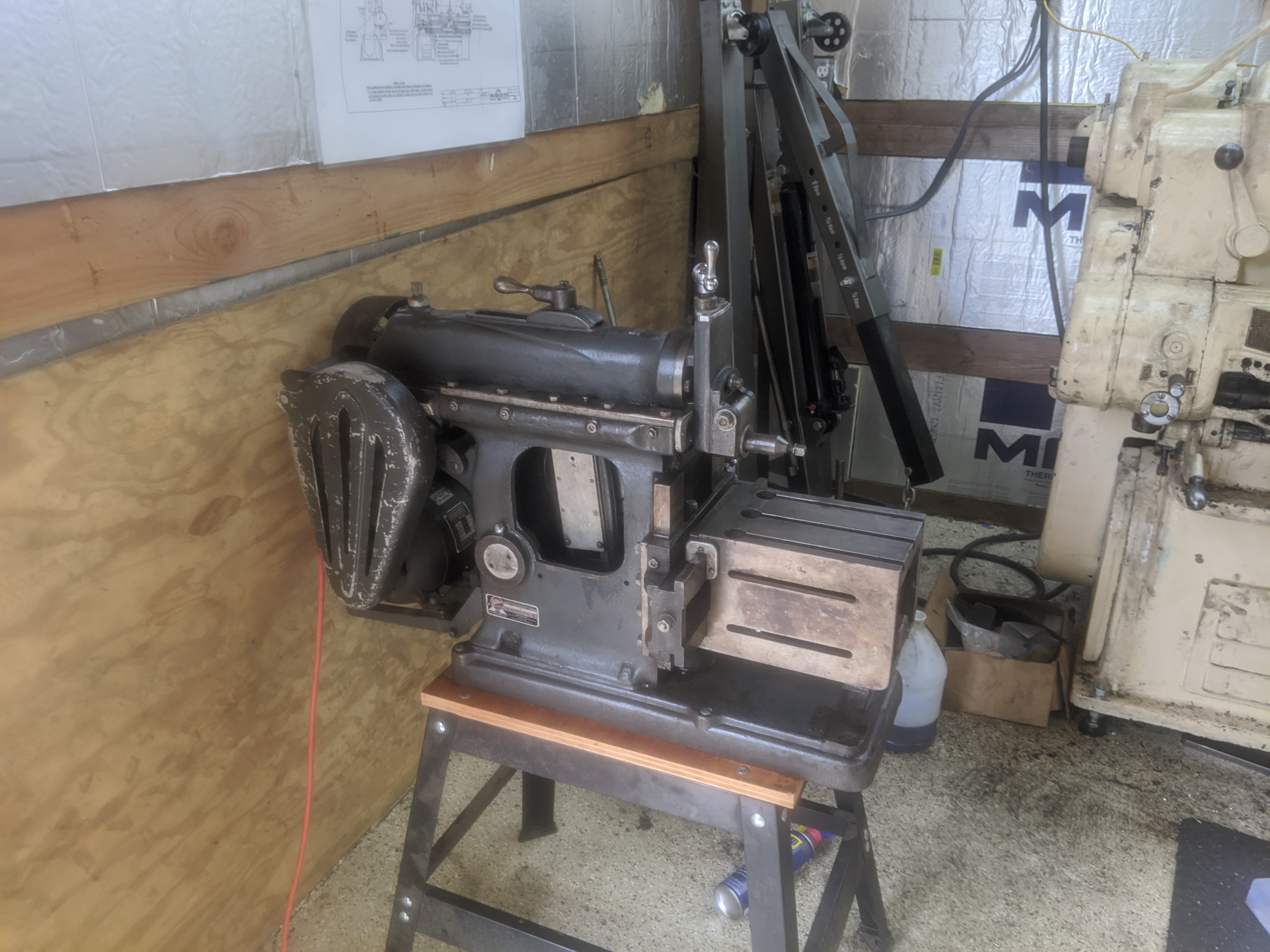 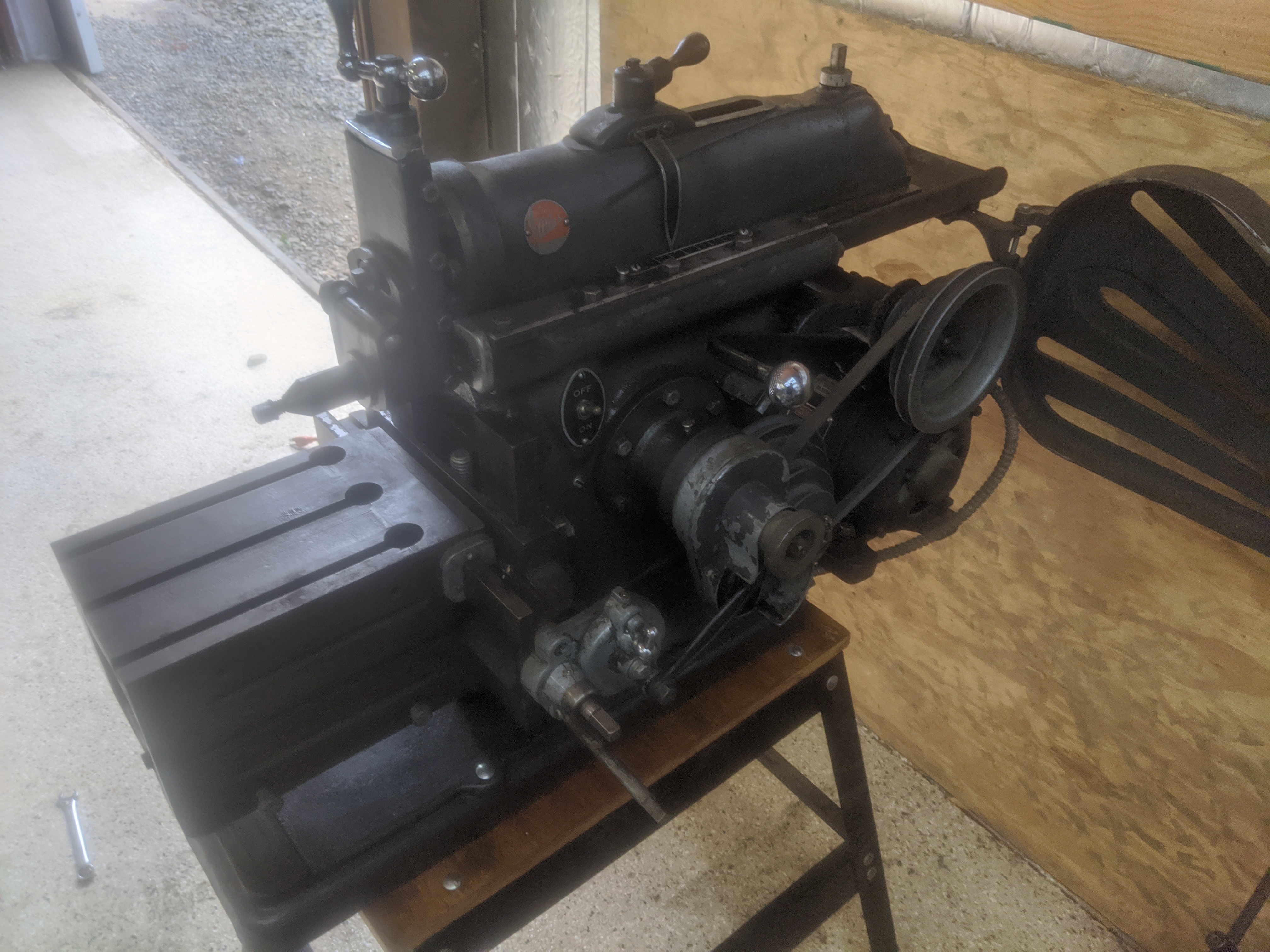 This was one... oddity. When the previous owner was testing it, the clutch handle rubbed against the back of the pulley. It took me a while, but I figured out this had a set screw. That said, this clamp on the 3/4-20 (??) thread in front of the pulley was odd. I might turn a bushing for behind it, but getting the pulley off seems like it require pulling off the length adjustment plate and all that is involved with it. For now, the setscrew seems fine. Anyone have an idea what this is for? Also, what goes in the section that you can see removing that flat-head headless-bolt thing? 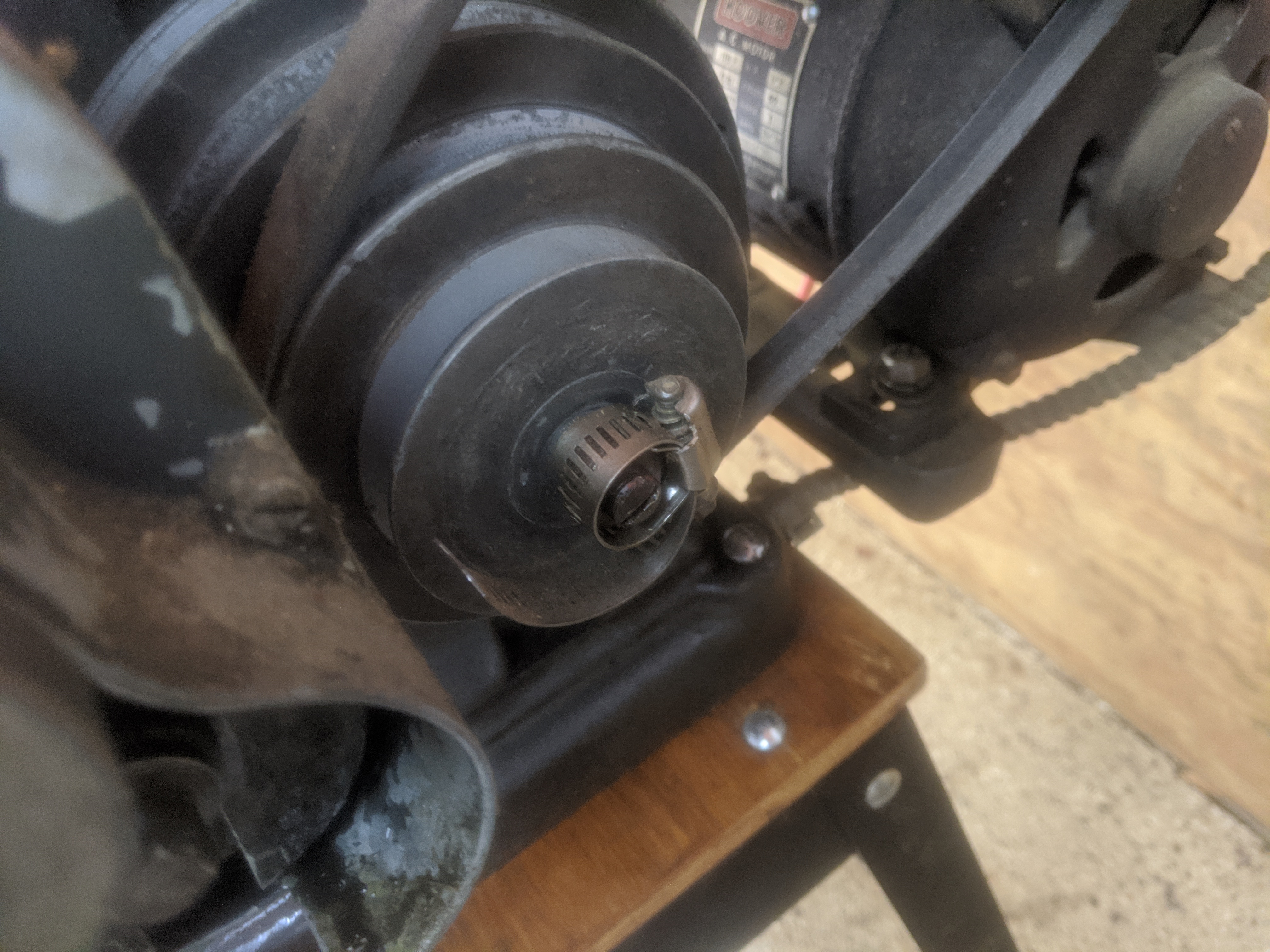 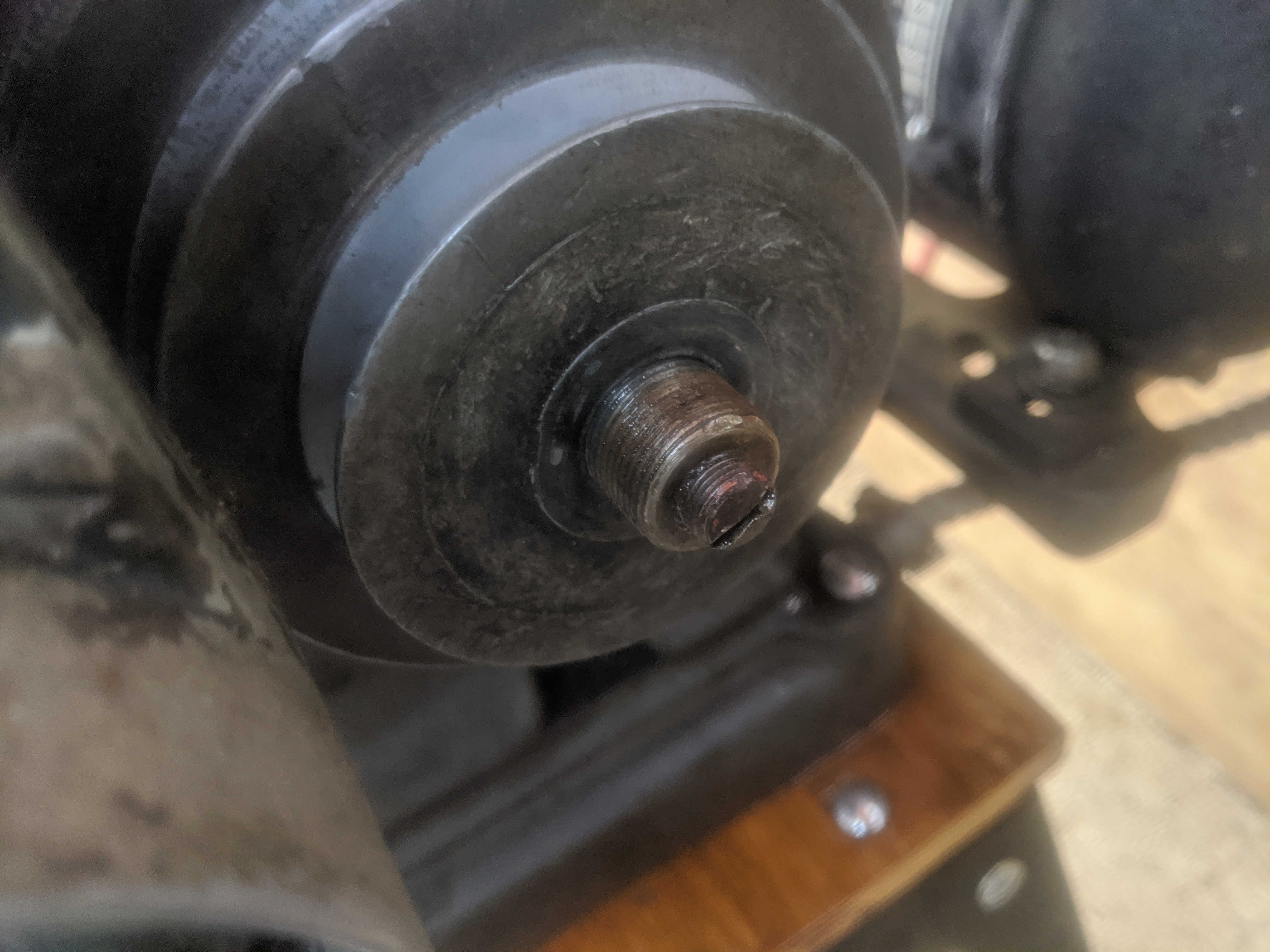 Finally a quick video of it running:

Nice find, and you got a universal tool holder to boot! Those alone are not easy nor cheap to come by. Manual or user guides aren’t that hard to find if we don’t have them here in the Downloads section. Have fun!

Getting the guards and a tool holder is nice, at typical ebay prices that could have added up to half of what you paid by themselves.

There are some drawings for a small shaper vise posted in one of the shaper threads.

As the others have pointed out, good score on the toolholder. I have not yet been able to acquire one for my Ammco, and may have to resort to making one.

I didn't realize the table on the Atlas is so poorly-featured. Isn't one side supposed to have vertical slots, preferably with a V-slot worked in, and the other horizontal? Also don't see the usual mounting holes, but maybe they are hidden by the shadows of the slots.
E

ThinWoodsman said:
As the others have pointed out, good score on the toolholder. I have not yet been able to acquire one for my Ammco, and may have to resort to making one.

I didn't realize the table on the Atlas is so poorly-featured. Isn't one side supposed to have vertical slots, preferably with a V-slot worked in, and the other horizontal? Also don't see the usual mounting holes, but maybe they are hidden by the shadows of the slots.
Click to expand...

The top is just t slots as far as I can tell. The left side slots are through holes from what I remember, as is the right side.

One interesting thing that I didn't mention. The table foot was STUUUCK when i got it. I didn't want to remove the table in order to get it out, but it was COVERED in burrs. Someone at one point used some pliers to twist it, so there were teeth marks all over it. I used a 1 7/16 wrench that I have for my lathe to turn it 90 degrees at a time and cleaned up the top half with a file and some scotchbrite. Then I used a punch and mallet on the foot part to get it to go lower and did the same on the bottom. It isn't perfect, but at least moves reasonably easy.

When/if I take the table off to surface grind it, I'll likely toss the foot into the lathe for cleanup.

There is a cap that goes on the pulley to load grease into the bearing like other side bearing. 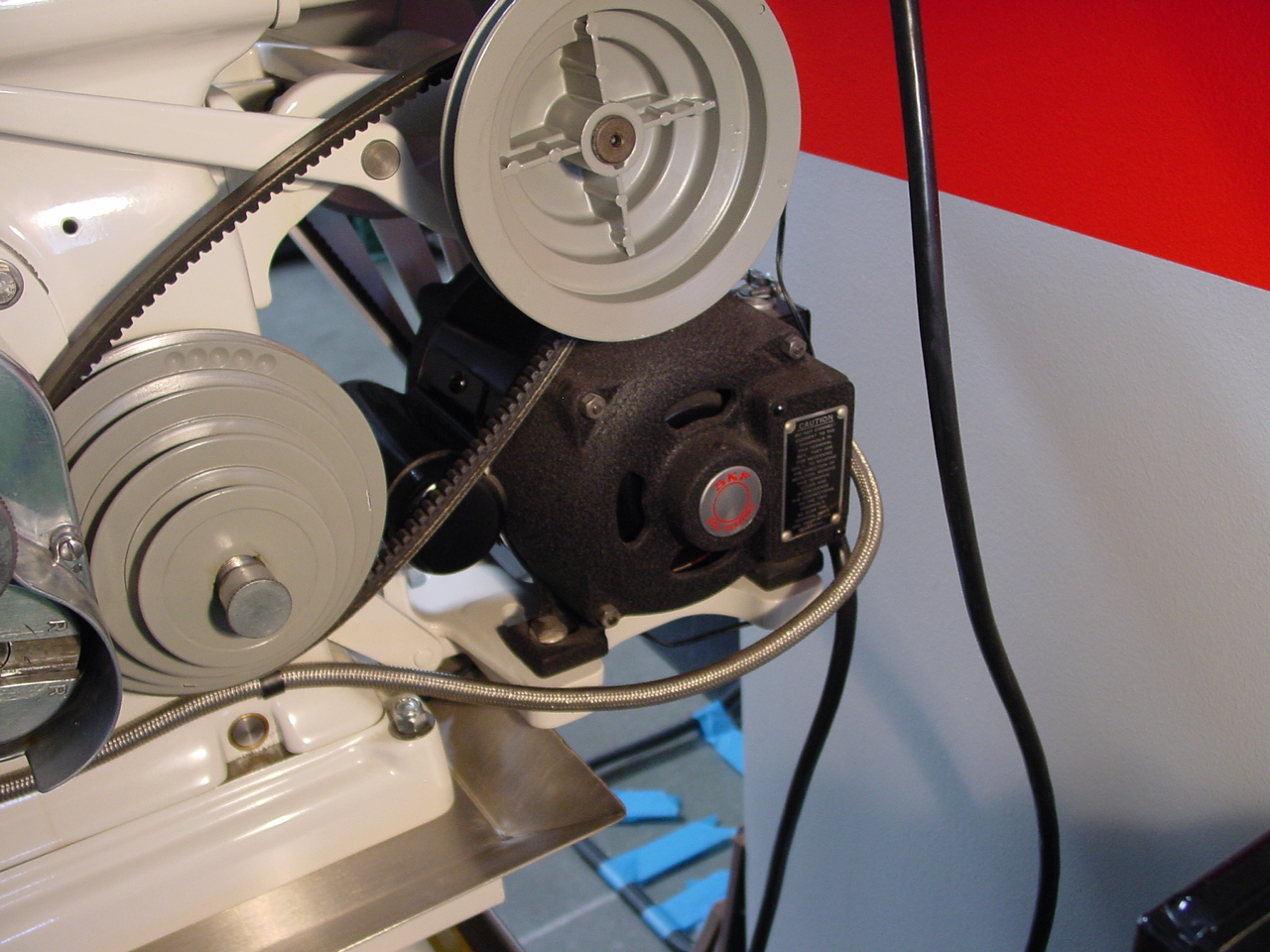 When you square up the table reference off the column not the ram. The ram usually will be the wear item and will drop off in the front. That was probably why someone tried to correct it by shaping off the top of the the table. The table wasn't out it was the wear in the ram side causing the problem.
E

frugalguido said:
There is a cap that goes on the pulley to load grease into the bearing like other side bearing.
Click to expand...

Ah! That makes sense. There WAS grease in there, and I was considering seeing if I could put a zerk on the inside thread. What ends up being in the inner-threaded portion?
E

Nutfarmer said:
When you square up the table reference off the column not the ram. The ram usually will be the wear item and will drop off in the front. That was probably why someone tried to correct it by shaping off the top of the the table. The table wasn't out it was the wear in the ram side causing the problem.
Click to expand...

I was likely going to use the ways of the table as my reference when setting up on the surface grinder. Probably something I'll do in the future. Once my hit/miss engine build is done, I'll likely be doing a vise project for this guy.
F

When you work on the table, mill the front edge flat to accept a angle plate to make the work area bigger. 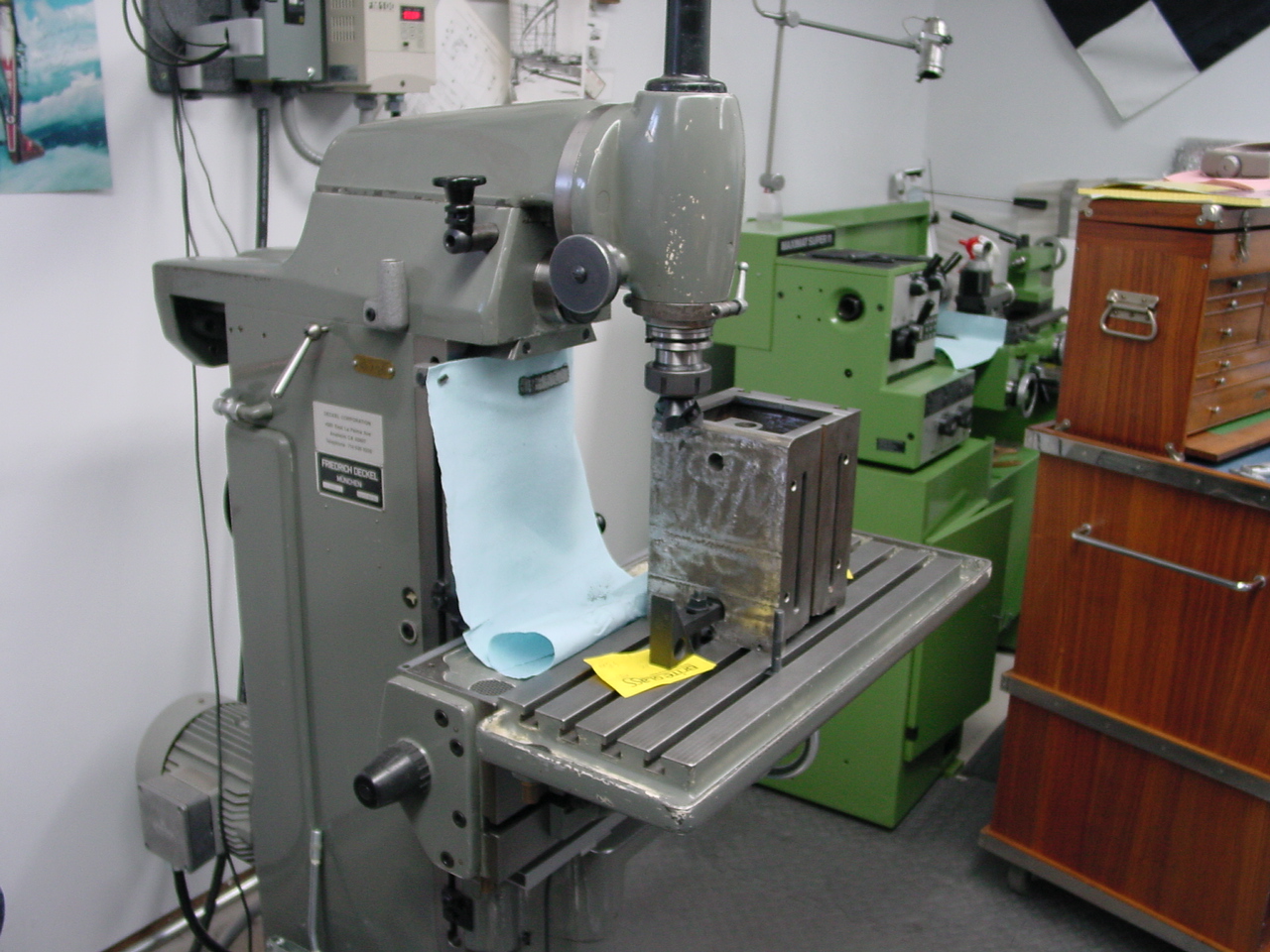 frugalguido said:
When you work on the table, mill the front edge flat to accept a angle plate to make the work area bigger.
View attachment 324959
Click to expand...

Nice idea! The plans I was going to build did something like that.
E

So... long day today. I decided to skip my normal project (the hit/miss engine) and instead grind in the table. I didn't do the front-edge for the angle plate, the surface grinder started getting testy, and by the time I got everything working the front edge was the last thing on my mind!


I tried to indicate in the table/knee in on the grinder 'right way up', but the bottom of the casting gave me all levels of hell trying to get it even. Instead, I opted to grind the bottom of it first. It took a little bit of shim stock and an indicator (plus quite a while!) to get it in, but I indicated it in on both axes ('up/down' and 'fwd/backwards' in this image). 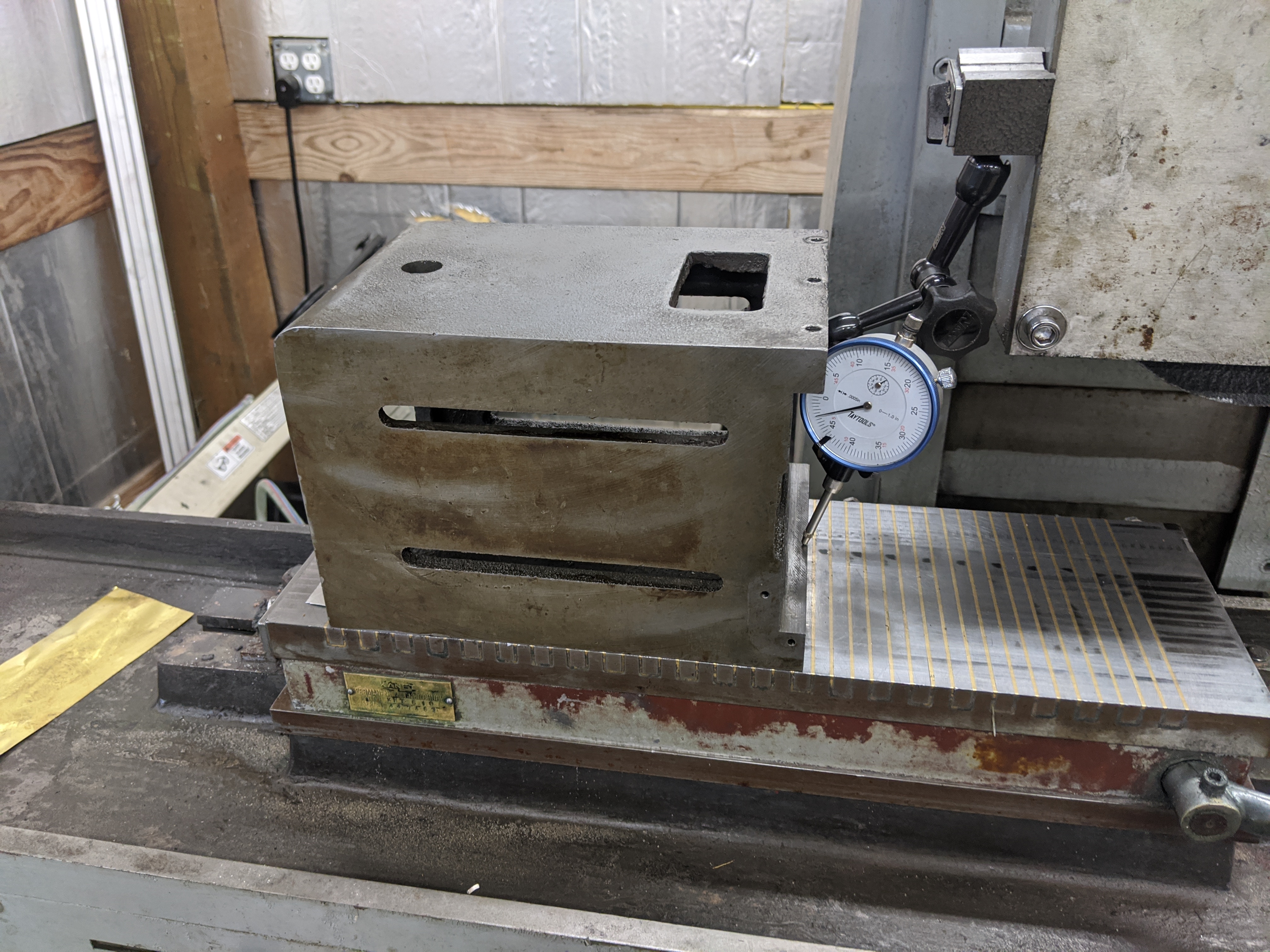 I gave up at this point, I'd already taken about 25 thou at this point, so I figured that one spot wouldn't matter. I used my flat stones to shine up the 'high' spots (my surface grinder still leaves a little bit of a 'ripply' pattern) to make sure it was about even, so thats what you can see in this picture. Additionally, I used a pretty high step over since its just the bottom. 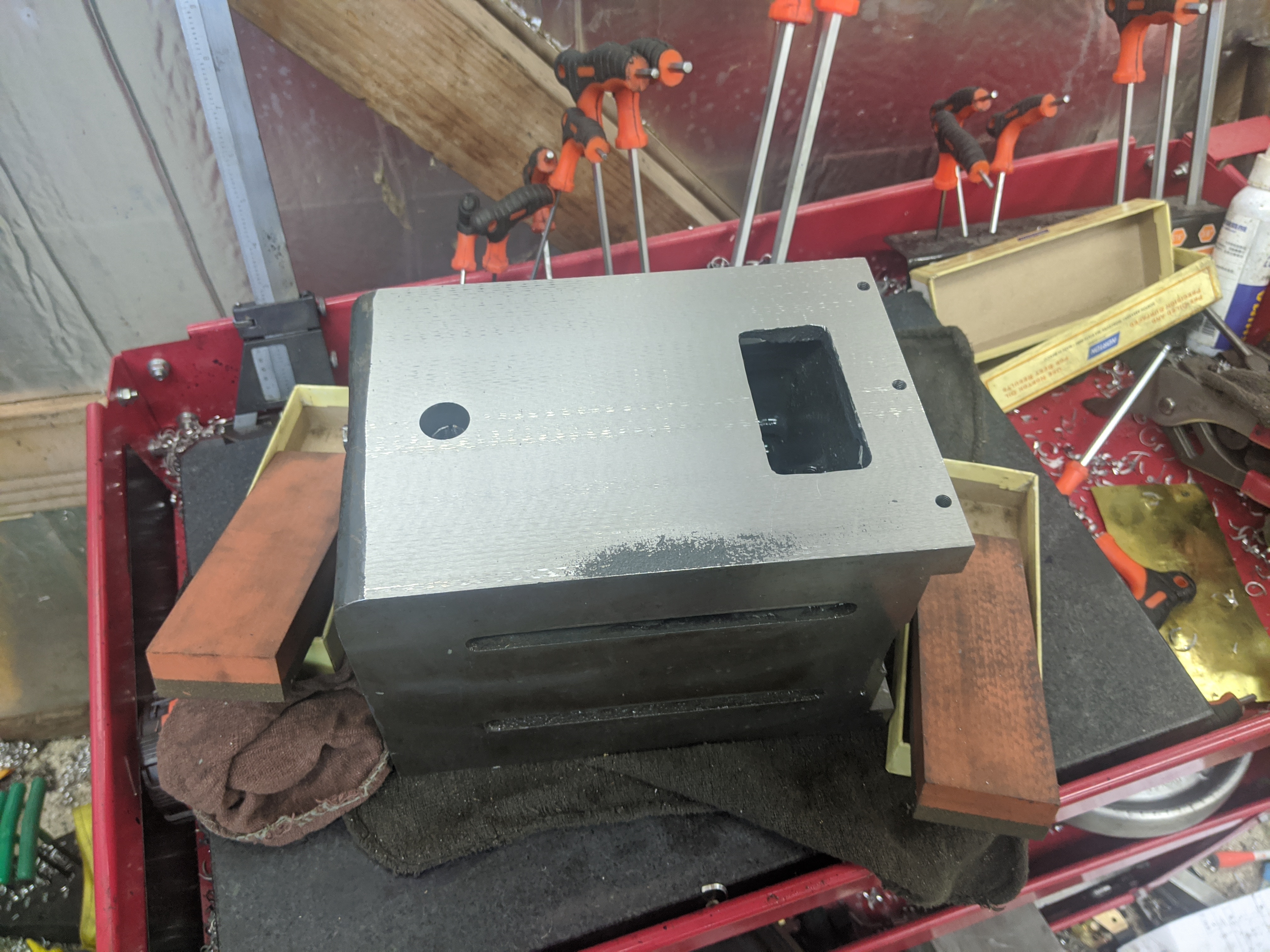 With the bottom flat and square, I flipped it over and started grinding the top. I learned quite a few things here! First (actually learned earlier), the previous owner had taken A LOT off the top here. I looked at other knees, and they have a ton of material above the circles. This knee had it below the circles on about 30% of it. Second, the previous owner either had a 'false start', or tried to do this again and gave up. The part nearest to me was about 15 thou shorter than the rest. The rest cut pretty evenly, but that one part (to the near side of the last t-slot) took forever to get to. I still didn't get all of it. 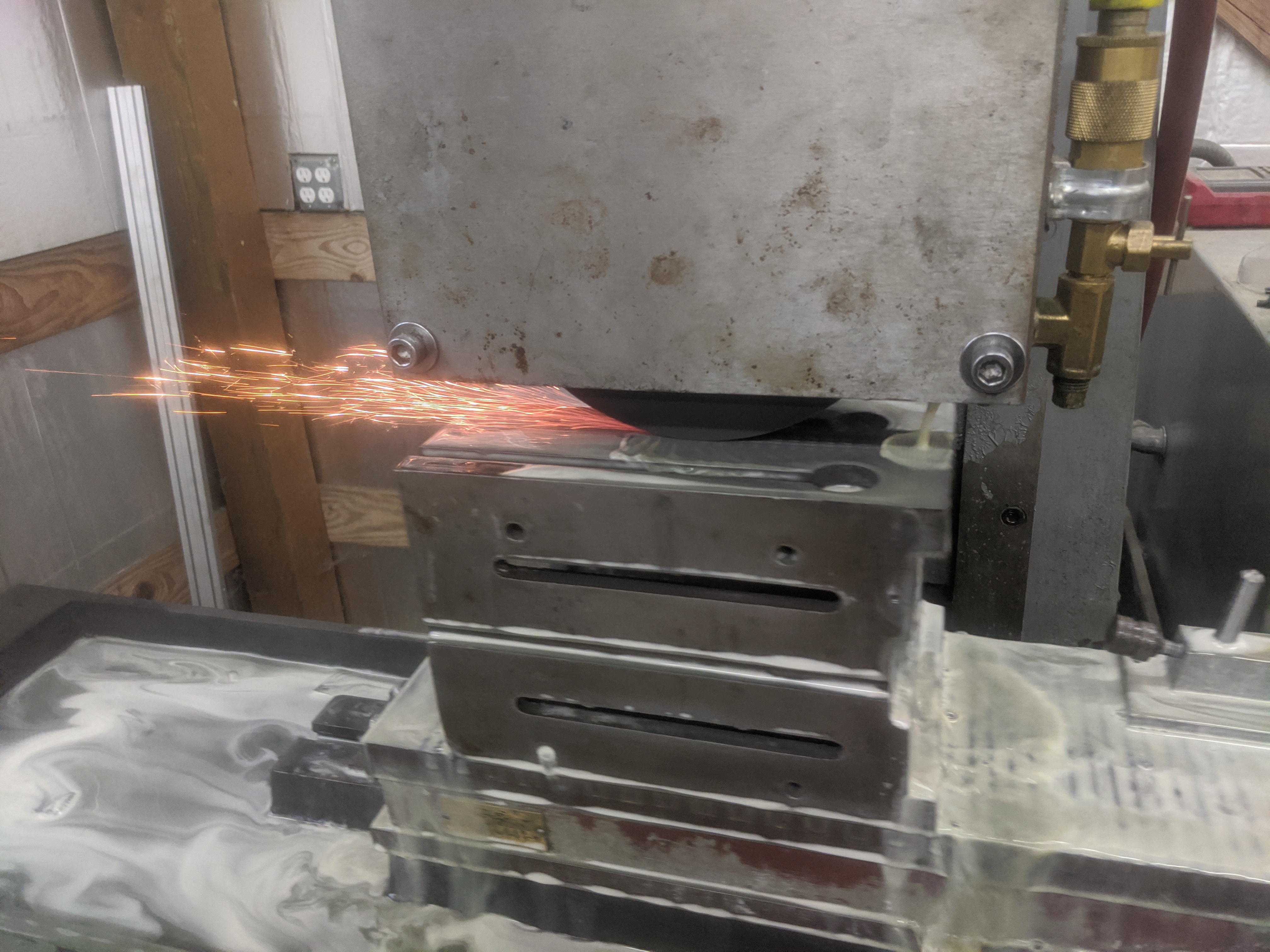 I did some finish grinding on this one so it turned out a little better, This is the last corner that I wasn't able to get, the previous owner's scraping of this spot left it pretty terribly low for some reason. 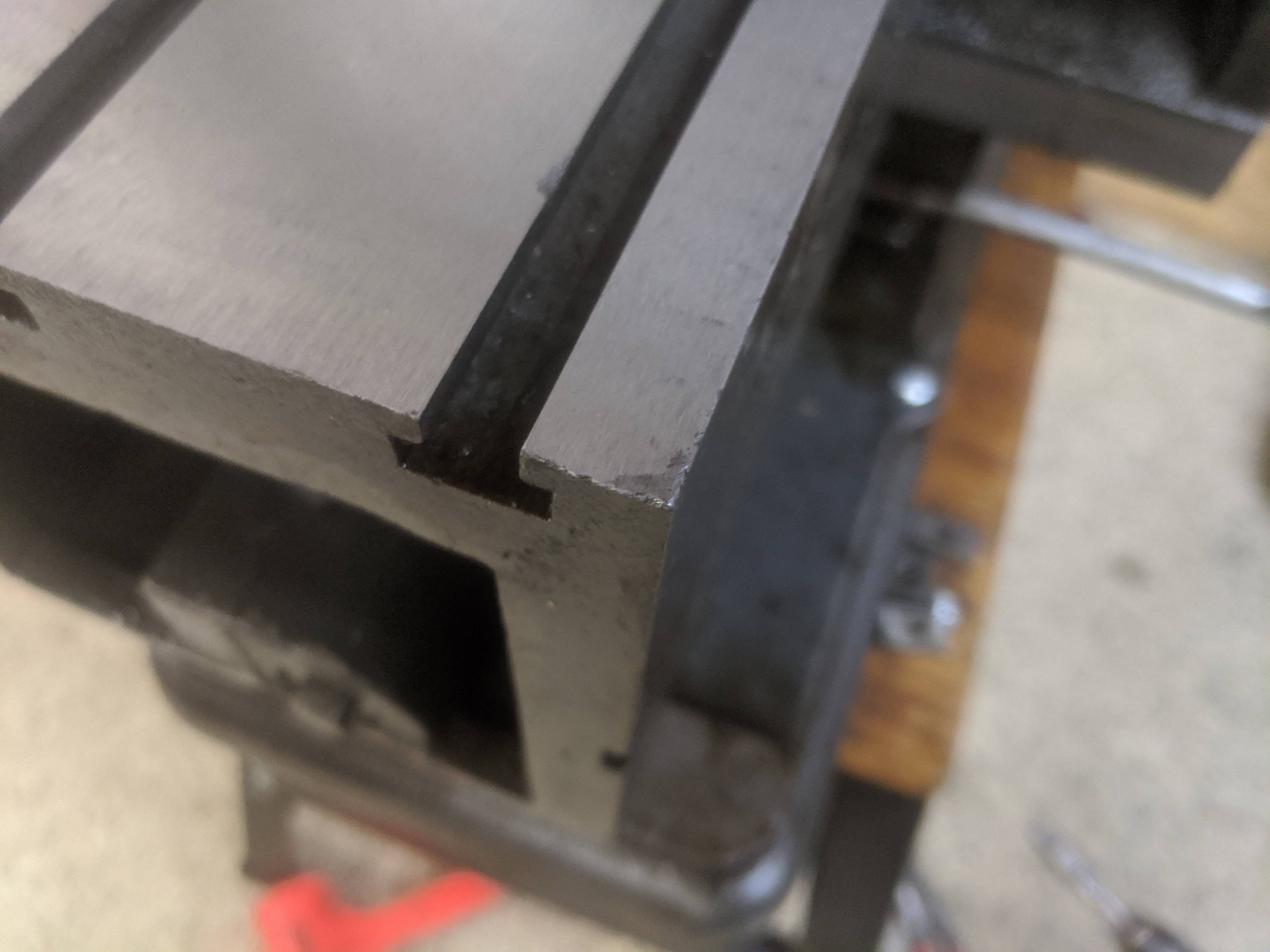 Here's the other part I couldn't get, this is just a dent though I think. 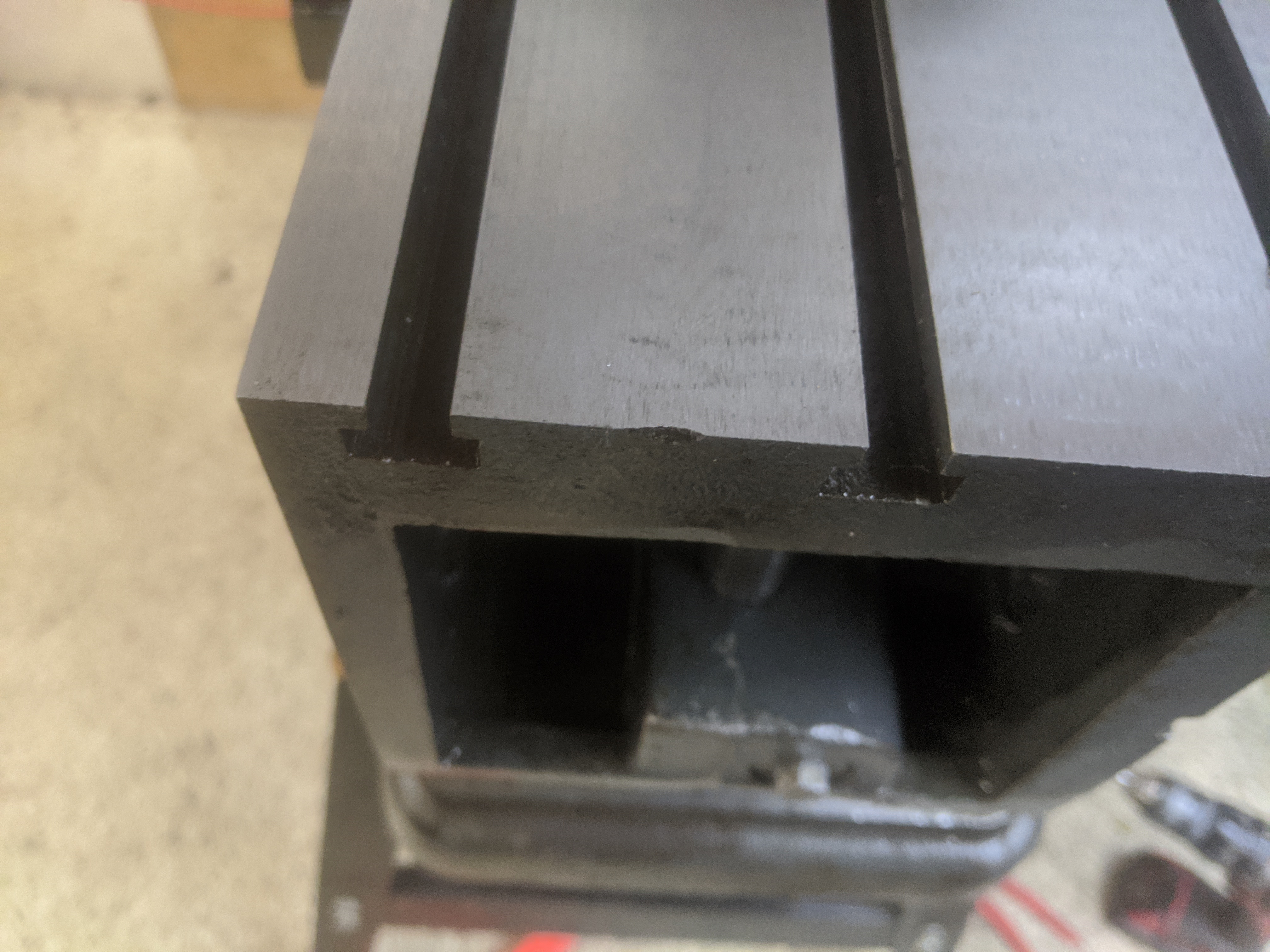 And a couple of pictures of it all put back together: 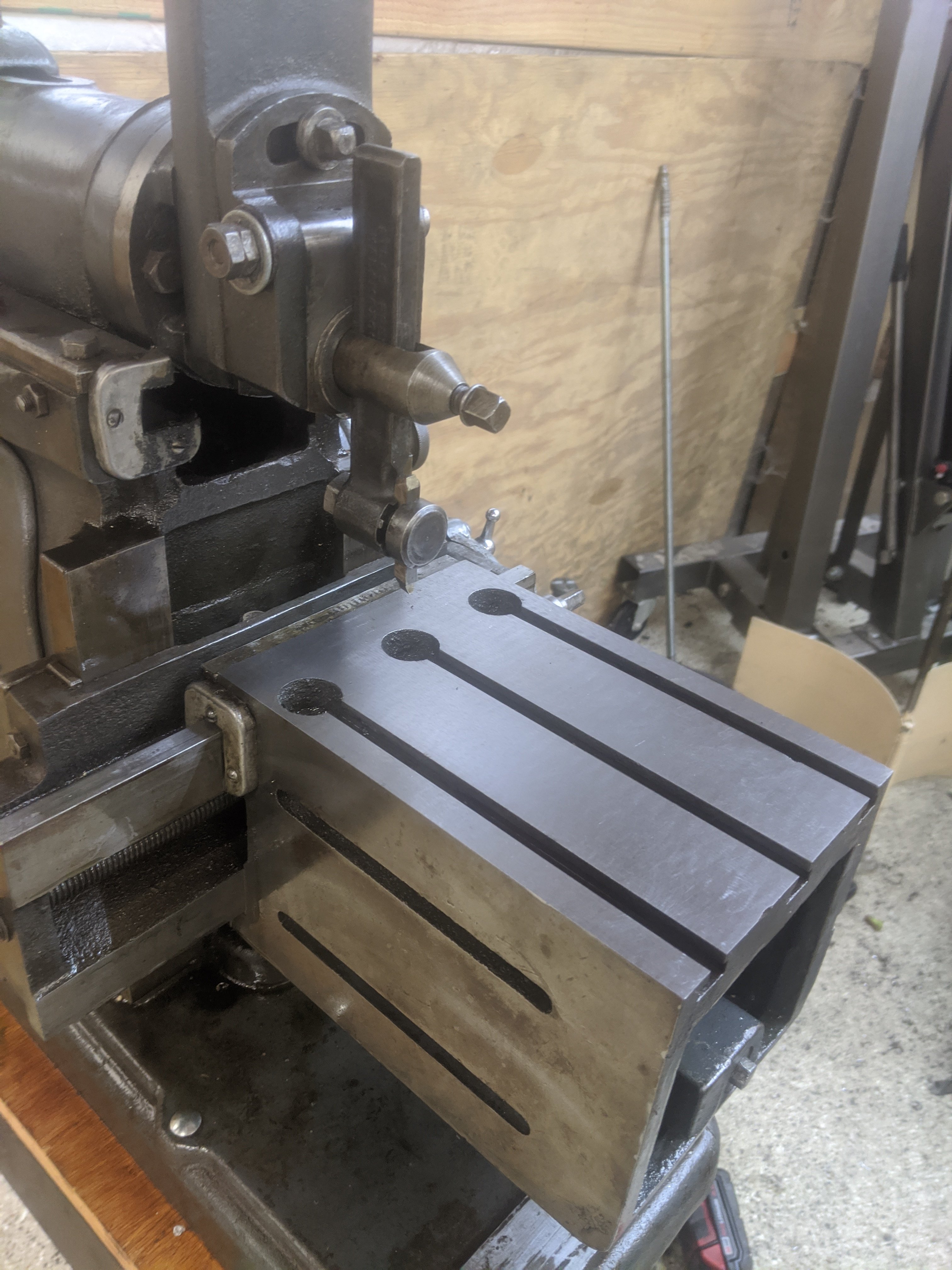 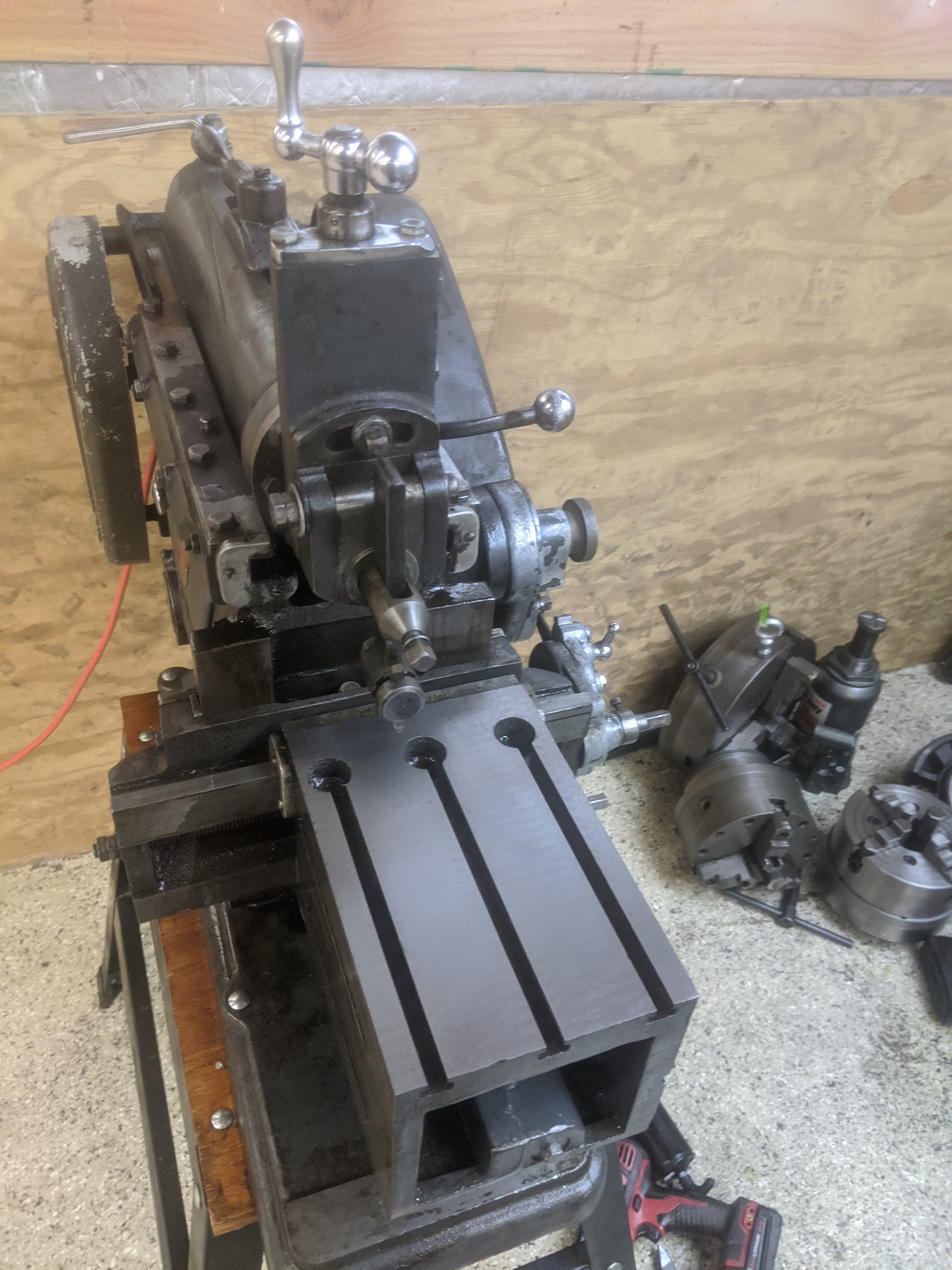 Finally, I wanted to start making T-nuts for the 2 part vise I want to make, which is a big part of the motivation for grinding the surface (since I can't just count on a vise-bottom to index off of!). I managed to get 3 of the 4 out of this piece of stock, the 4th decided to eat my 5/16-18 tap, so it didn't get finished I'm using the same 1x1 stock the mounted parts of the vise, so I'll likely just use some of that scrap to make another t-nut or two. 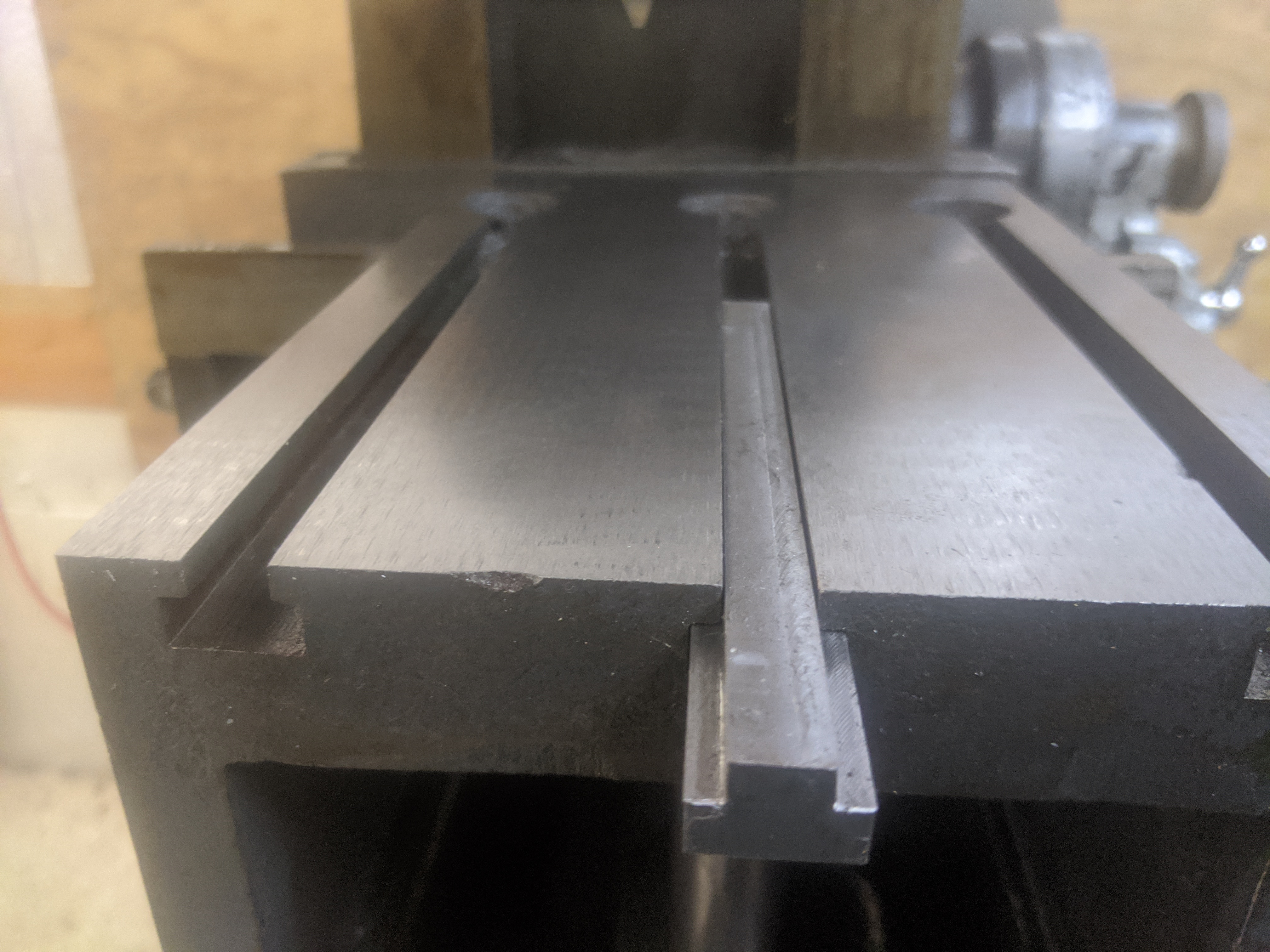 SO I did 2 things today. First, I timed the table advance. I'd realized that the Left/Right markings on the advance wheel was reversed, so i removed it and swapped it. Easy enough, and makes operation MUCH less confusing! The R/L on that and the switch knob are now consistent.

Then, I did a bit of work on a 2 part vise. I think I have it planned out pretty well. I have it bolted to the table with the T-nut slots exactly 4.5" apart, which is the distance between the far T slots. This allows placing it in both orientations.

Hold down bolts are 5/16-18, with a 1/2-13 as the tension bolt. I DO still need to make the moving jaw (I already reamed the guides, as you can see, 3" apart), but the precision ground shaft hasn't arrived yet. I made sure the tension bolt is long enough that it should overhang the table by quite a bit, this way I can get to it on small materials (plus having a long distance for the moving jaw!) Despite lacking the moving jaw, this was good enough to do my first test cut! Unfortunately I must have got oil on my lens, so the pictures/videos after this are not at all reasonable looking.

I did a 2 click-step, with a round nose tool and about a 30 thou depth of cut (in aluminum) and got a pretty darn nice finish! The shaper had no problems with it, I was pleased as punch with it and my vise setup. 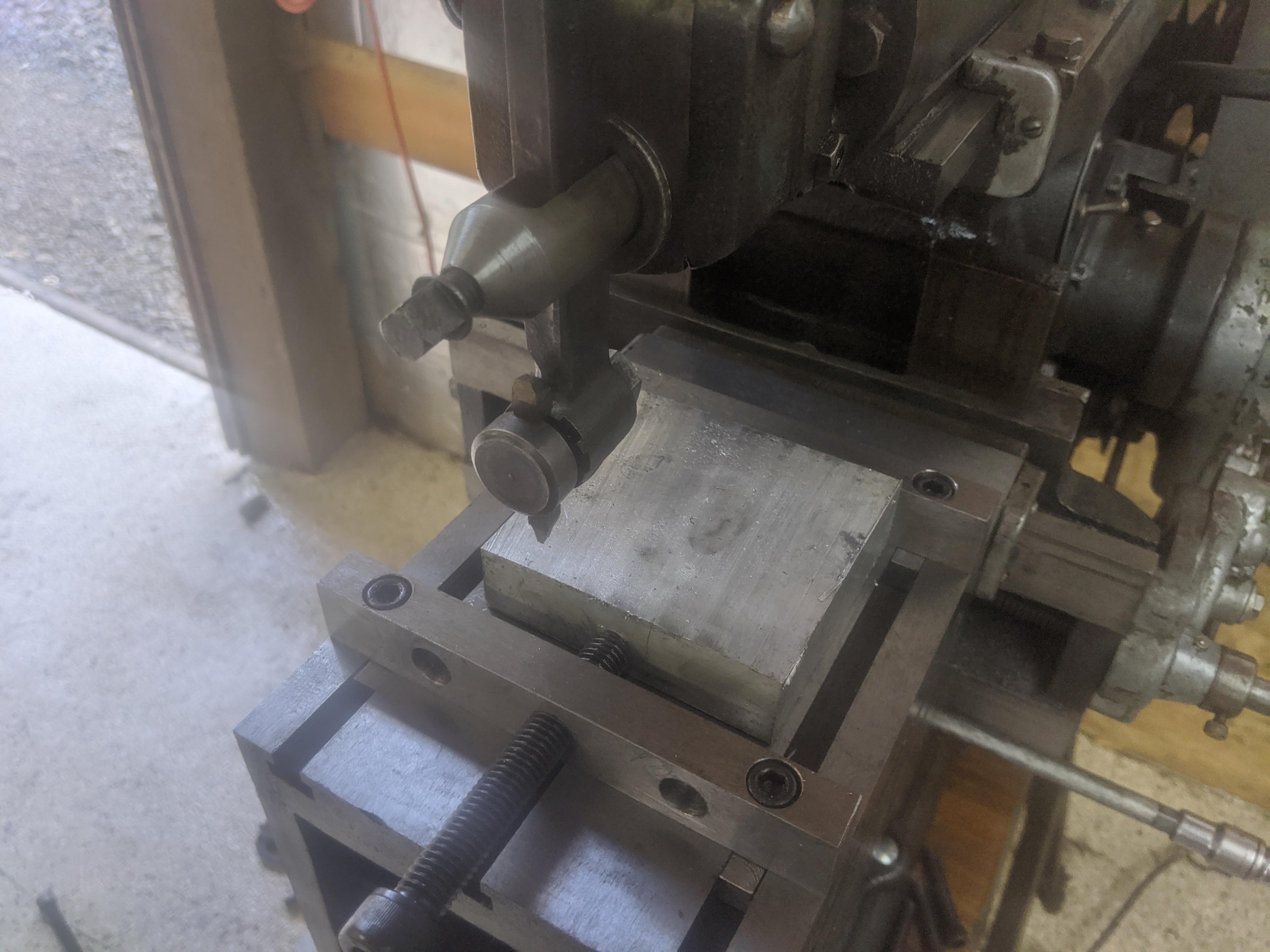