New to me Wells Index 847 help

long time lurker first time poster. i finally got my first milling machine about 3 weeks ago (used index 847). soon as i got it home, my first order of business was to take it all apart and clean out the years of junk and grime. so i went at it. took apart and cleaned out the bottom half pf the machine over a few days. and reassembly went fairly smooth (no left over parts at the end). i used the machine a few times just to play around and see how it worked and noticed the power downfeed only worked if i held the handle in the up position. so naturally my next mission was to take the head back off and take it apart. this was much more difficult to reassemble. the puzzle of gearing to make everything slide back in properly was fun to figure out....first time always takes the longest. then i spent about 3 solid days doing the same thing over and over again with the downfeed shaft/clutch until i realized the gear slid on the shaft from the other direction (felt like an idiot wasting hours and hours trying to figure out why i could get the freaking clutch adjustment to line up).still need to tune in the clutch but it seems to work.

now the only thing that i cant figure out is the clock spring. i have everything assembled back in the head, but the clock spring will not retract the lever even with the quill out! if i watch it wind and unwinding the spring looks like (and sounds like) its sticky? if i wind it all the way up each layer as i unwind it kind of pops or unsticks from other layers, but it will not do it on its own. before i took it apart it did a decent job. so i know ive done something wrong somewhere. i took the spring plate out and washed it and oiled hoping that would do it...it didnt. the downfeed shaft moved freely, its not binding when manually lifting and lowering the quill.

thats about all the detail i can think of with my issue. any help would be great! ill try and post up some photos of my new toy also. everyone likes pictures thank you in advance for any help.

So the spring worked before but doesn't now? You must not have put enough preload on it when you reinstalled it is what I'm thinking
Mark

The convention on milling machines is for the quill to stay where you leave it when unlocked, the clock spring simply balancing the weight of the quill, not being pulled back up like a drill press.
R

some photos of the process thus far.

the return spring will not unwind its self with no weight against it. maybe something in the head is too tight? i tried to loosen the opposing nut, but that didnt do anything. im doubting the issue is hurting anything other than me wanting it to work properly. maybe ill take the side off again and dig around inside and see if something looks off in the clutch area. 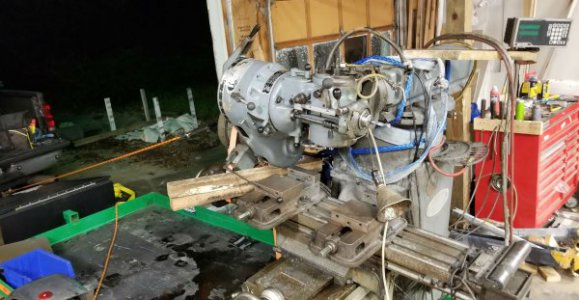 My feeling is the "popping and unsticking" means the spring is broken somewhere... take a close look
M

Redstopgreengo123 said:
some photos of the process thus far.

the return spring will not unwind its self with no weight against it. maybe something in the head is too tight? i tried to loosen the opposing nut, but that didnt do anything. im doubting the issue is hurting anything other than me wanting it to work properly. maybe ill take the side off again and dig around inside and see if something looks off in the clutch area.
Click to expand...

If you go further with the clock spring, beware, it can be dangerous. Do some studying and learning here and elsewhere before taking it apart.

You probably already know it, but Index is still in business. You can call them for parts, and maybe for advice.

Here's how it works on my Model 645. I don't know how your 847 compares, but I bet it's pretty similar. This is a photo of mine with the spring cover off. 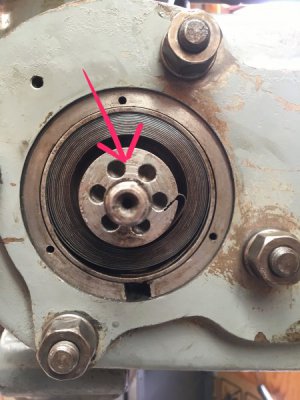 The collar that the arrow is pointing to is pinned to the quill downfeed shaft. It has several diffent pin holes through it. To adjust the preload, you drive out the pin while placing pressure against the spring with the quill feed handle. Then, using the handle, rotate the collar until you think the tension is right and replace the pin. This is a trial and error process.

If I have misunderstood your problem and you've already been through this, let me know. Also, as Bob said above, Wells-Index states in their manuals that the spring is only a counter balance. When properly adjusted, the quill should stay in place where you leave it.
R

thanks for all the input thus far.

i noticed something last night that im betting is my cause of issue. when i took off the right side cover to pull out all the stuff in the photos, i ran the machine in power downfeed to mess with the clutch adjustment...it power feeds without being engaged! even when i took out the bronze wishbone looking engagement arm and the mating gear, the gear on the shaft has some sort of friction that causes it to feed!

making me think that the "shaft assembly" photo is incorrect and the gear does go on from the same side as the washers. i tried assembling with the gear on that side a few times, but that would always push the wishbone arm out about 1/4" too far to allow the clutch adjustment part to connect.....BUT! that was before i realized the worm gear wasnt allowing me to fully push the shaft inside the head, and had to pull the transmission off the back a few inches first!

well guys, i think it just got figured out!!! the gear is on the wrong side of the shaft?

i will try to assemble with the gear on the other side of the shaft at lunch and see. have a feeling that will fix both power feed and spring issue....and hope anyone else in the future can use this info. that freaking vintage machinery manual is not the greatest.

... And now i broke something

switched the shaft assembly around, and figured out the order to reassemble everything to get the clutch adjutment nut working....started to put the rear gear cover back on, and this happened.....

misaligned in the head

Did you ever get your parts replaced? I am having trouble with the clutch fork also
You must log in or register to reply here.
Share:
Facebook Twitter Reddit Pinterest Tumblr WhatsApp Email Link
It can take up to an hour for ads to appear on the page. See our code implementation guide for more details. If you already have Auto ad code on your pages there's no need to replace it with this code
Top
AdBlock Detected