Please click on this notice to be taken to the Site Support Forum so you can learn more about what happened, what is being done and post a support request so we can help you get your issue resolved.
J

Man I suck. Finishing up the last of my main tool holders for a new QCTP and just got done with a parting blade holder I was quite proud of. Nice snug dovetail and a Kung Fu grip on the blade which is about as close as it can get to the edge of the holder while still having a tiny lip to keep it from snapping out.

Thought I'd be slick and give it that "built-in relief" thing (rake actually) some of them have with the angled blade, never stopping to consider that the angle I chose jacks the tip up about ten miles above center even with the holder dropped all the way down. Come to think of it, with this setup, you'd probably have to go almost parallel to the ways to keep it at a reasonable height.

I guess I can custom grind the blade for it for the time being, then when I'm less angry about it, maybe try doing another one. 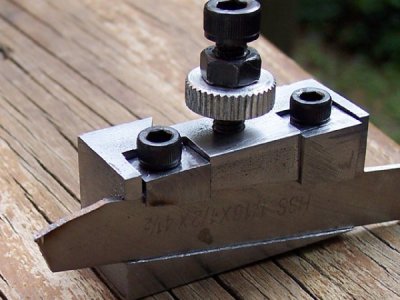 Just grind the blade back to remove all of that "custom" grinding you did. Still lots of life left.

No, the blade isn't the problem. I just lopped off the top corner of that to see if I could bring it down closer to center. That angle in the holder is so the regular trapezoid shaped blades will have a sort of back rake without you needing to do anything to them. If it had its regular shape, you'd see that the tip sits way up too high. I probably should have flipped the blade around for the picture.

Greetings Jidis, aside from the error in adding rake to the holder, it's a fine looking holder. Next one may-be just go straight and grind some rake in the blade.
B

One problem is that lopping off the top part of the blade is that it introduced a compound angle that may make the blade thicker at the back end of the cut, causing binding; I think the back angle should be no more than about 5 degrees, the angle shown may cause hogging in, especially with softer metals.
4

Just decrease the angle that you cut the slot by re cutting it and mate the 2 tie down slots to the same angle. Your tightening system will make up the difference when it drops down. The blade doesn't need to be held tight in the slot with the 2 bolt system that you have.
J

Thanks for the advice and compliment. That weird looking cut I made was just to see what it would do. I can clean that up and change angles.

I guess Ben is talking about the back angle of the holder itself (which I made too steep). Yeah, if I'm remembering right, it might be 8°. Five or below might be enough to get me back to center, but I still don't like the idea of not having any "play room". If I had to part something large it would probably stick out and up enough to still be past it, but if I re-make it, I'll be careful to check all that on paper first.

4ssss- I may look into re-cutting the blade inlay, I just won't be comfortable seeing any of the old stuff. Some of it is a bit more than it looks like too.The hold-downs have got a small lip at the front, and the grooves they sit in are end mill cuts, so they're actually round at the bottom, but it isn't visible behind the blade. I'd probably have to deepen those or square out the radius. Lastly, the inlay itself was cut slightly shorter than the half inch blade, then a ground narrow hacksaw blade cut a lip into the bottom part.

On the plus side, this was the last of about four holders, so much of the process has gotten sort of routine if I choose to do another. Wish I could have plowed a dovetail across a long block of two inch wide steel then sliced off a few holders to spare myself all the "test fitting", but all my slicing would be done with a hacksaw which I'd rather not think about.

dlane said:
Was that with the tool holder all the way down in the qctp
Click to expand...

Yeah, with the stock blade profile I could drop it all the way down until it was sitting on the compound and it would still be too high. Chopping the blade off like in that picture takes care of it, but I'm surprised many of the angled ones out there don't have that issue, even if the angles are really low.

Make the top of the blade level, that way you can extend or retract it as needed and not recent center.

Can You move the tool post over enough to let the tool holder drop down further and add a longer extension adjusting screw?
J

mcostello- The way it (my QCTP) sits, the holders actually are over the compound even in the 90° positions, so it would stop there regardless. I may do what some were discussing in a different group and ditch the compound later anyhow. I'll make sure to make the riser block compact enough if I do, for that and other reasons.

And thanks Tom. I'll remember that when I clean up the blade. That would have been how the blade was stock anyhow (rake-wise).

One way to change it. Is get a 5/8 blade and reslot your angle in the toolholder. Rotate your angle so it’s less drastic. You’d get acouple degrees out when f the 1/8 diff.
J

Speaking of alternative blade heights, I was wondering if that blade/holder I had before was a standard size (1/2") to begin with. If a bunch of the parting blades out there are less than that, it might explain why they don't sit too high.

BTW mcostello- I went and double checked. It does land on the compound, but only by about a quarter inch at the edge. If I trimmed about a 1/4x1/4 rabbet along the back bottom of the holder, it would probably give me that extra drop, but knowing me, I probably won't be satisfied until I've got a nice clean new one. I do still need a dial indicator holder, so I may screw a block onto this and adapt it.
You must log in or register to reply here.
Share:
Facebook Twitter Reddit Pinterest Tumblr WhatsApp Email Link
It can take up to an hour for ads to appear on the page. See our code implementation guide for more details. If you already have Auto ad code on your pages there's no need to replace it with this code
Top