intjonmiller said:
He already posted a picture. Scroll up.
Click to expand...

Yeah, I got a little overzealous there...

no worries, it happens to the best of us
R

intjonmiller said:
He already posted a picture. Scroll up.
Click to expand...

Sorry, I missed who posted what, I need to read more carefully.

Found the box on my doorstep when I got home from work. As it didn't go out until Saturday I hadn't even checked the tracking yet, so that was a pleasant surprise.

I feel greedy as I kept more than I expected to, but everyone has been saying that there's too much stuff, and I only took as much as I did to make room for the stuff I added. I actually had more to send but there wasn't anything else I could make use of to make room for the rest.

The speeds and feeds calculator is great because the one that came with my lathe warped in the heat of the storage shed where the lathe used to live, so it's kind of hard to use.

The drill chuck is a perfect replacement for a broken one on my father's drill press.

I've been working on replacing my carbon steel taps and dies with HSS, and there were several I don't have yet.

An old steel rule, 3/16" R8 collet, small tap wrench, roughing end mill, adjustable reamer with MT2 shank, 5 degree angle block, and the bottle of "misc gage blocks" were all cool and useful for upcoming projects. But I was most excited for the small sine bar. It has some pitting and I'm sure it wouldn't pass NIST certification, but I liked it even before I saw my father's initials, KAM, stamped in the end. 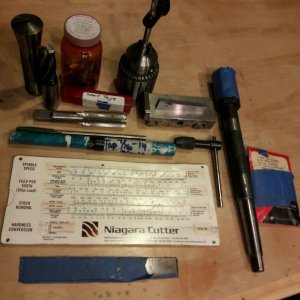 For those still in line, don't worry, as there is still plenty in there, including something wrapped up with Reeltor's name on it (good thing, because I think I know what is in there and it's on my list). Hopefully what I added will be as exciting for others as what I kept was for me.

A couple holes are basically stripped, which is surely why a couple screws were missing. I put the extra screws in the box. It will go out to Realtor tomorrow.

Thanks to all who contributed to my shop in these small but meaningful ways! Hopefully you'll get to see the things you added in use in pictures or videos of my projects in the future.

I had to hit two post offices to find the right box. First one had the version that is like 3/8" too small. For those who can handle images from Tapatalk, the top box is too small, the bottom one is correct. 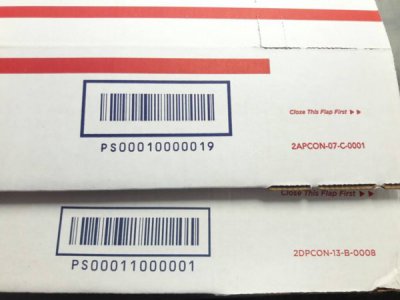 I dropped it off a moment ago, and delivery to Reeltor is expected on Thursday. This was fun!
R

Thanks for the update, you found some nice additions to you tool box --2 thumbs up on that. Also, thanks for posting the bar code for the correct box; just so happens it matches the one I have ready to go on to the next recipient. I have a bunch of goodies to add, and can't wait to see the special goodie that CS900 has my name on.
R

Is there anything anyone is looking for, would like to have or absolutely need?

Anything, Tool poor for larger lathe. (which is right now in parts) Hope to be back up in a few, but 2Mt long drill bits. A steady rest for an Taiwanese 10inch similar to an old jet 10X24. Prior just had small Sherline Stuff .
R

kvt said:
Anything, Tool poor for larger lathe. (which is right now in parts) Hope to be back up in a few, but 2Mt long drill bits. A steady rest for an Taiwanese 10inch similar to an old jet 10X24. Prior just had small Sherline Stuff .
Click to expand...

Are you going to use lantern style tool holders and HSS bits? Do you have the lantern tool post and need holders?
Guess I need to ask, what size is a "larger lathe". WreckWreck made a kind offer of some free tooling that his boss wanted gone, but it was for BIG machines that you might have been able to use on something as small as a 20" lathe. I guess larger is relative.

it is a 10 x 24, which is much larger than My sherline. In fact I made some backing plates and a piece for a spindle spider that is being used on someone else's late for doing precision barrel work for shooting competitions. Do not have a Lantern tools post, has a Phase II wedge type that uses AXA holders. have a few HSS bits, and a few insert holders, Hey I even used some of the tools from my sherline on things, Just took a slot of shimming (put 2 HSS 1/4inch tools in a 1/2 inch holder and you can get 2 screws tight on it.
R

Box arrived from Jon today, that thing is stuffed to the gills. I had to take everything out and repack twice to get the lid back on

CS900 thanks for the gift from Santa, Christmas came early 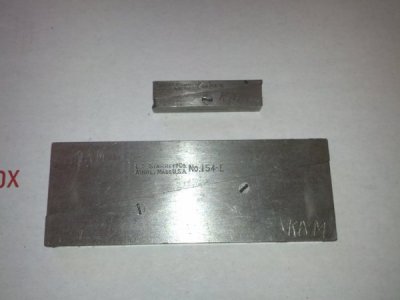 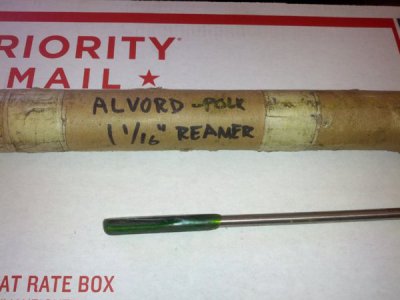 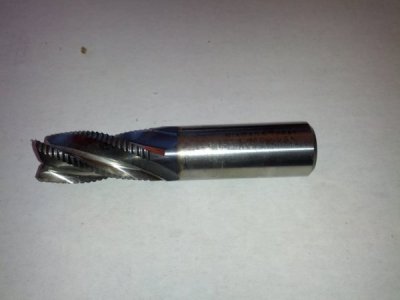 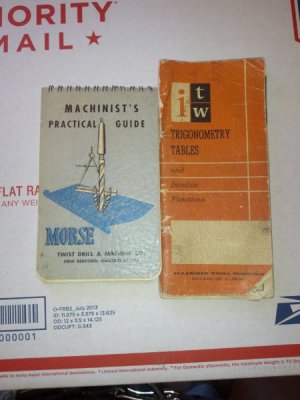 I added what I could to the box, some NOS that I've been collecting plus some smalls. Like Jon said there is a lot of nice stuff in the box.

Have fun, box should go out tomorrow

I do not. when I bought my first mill (a taig) a guy at work gave me this awesome tool box that he got at a garage sale for cheap that had a bunch of cool stuff in it, all with the initials KAM. Whoever he is/was seems like my kinda guy!
R

cs900 said:
I do not. when I bought my first mill (a taig) a guy at work gave me this awesome tool box that he got at a garage sale for cheap that had a bunch of cool stuff in it, all with the initials KAM. Whoever he is/was seems like my kinda guy!
Click to expand...

I like to watch Tom Lipton on YouTube, Tom likes to buy used tooling and it's a real bonus when he can put a name to the tool. I think that's pretty cool to know that XYZ made this widget in 1939 or 1965 when he was an apprentice. I'm glad you have some nice stuff from KAM.

To keep the inertia of the box moving along, it left Georgia on it's way to California this morning. Tracking number sent.
R

update on the box tracking says

Bill (BFD), I pm messaged you my address but did not get confirmation that you got it, do I need to resend?
Looking forward to some surprise and delight!
Jon

Bill,
I guess you got my address because there was a nice 30lbs box waiting for me when I got home, this thing has some serious weight to it!
I filled up the air space created by taking these out, I have been lacking a decent scriber for forever: 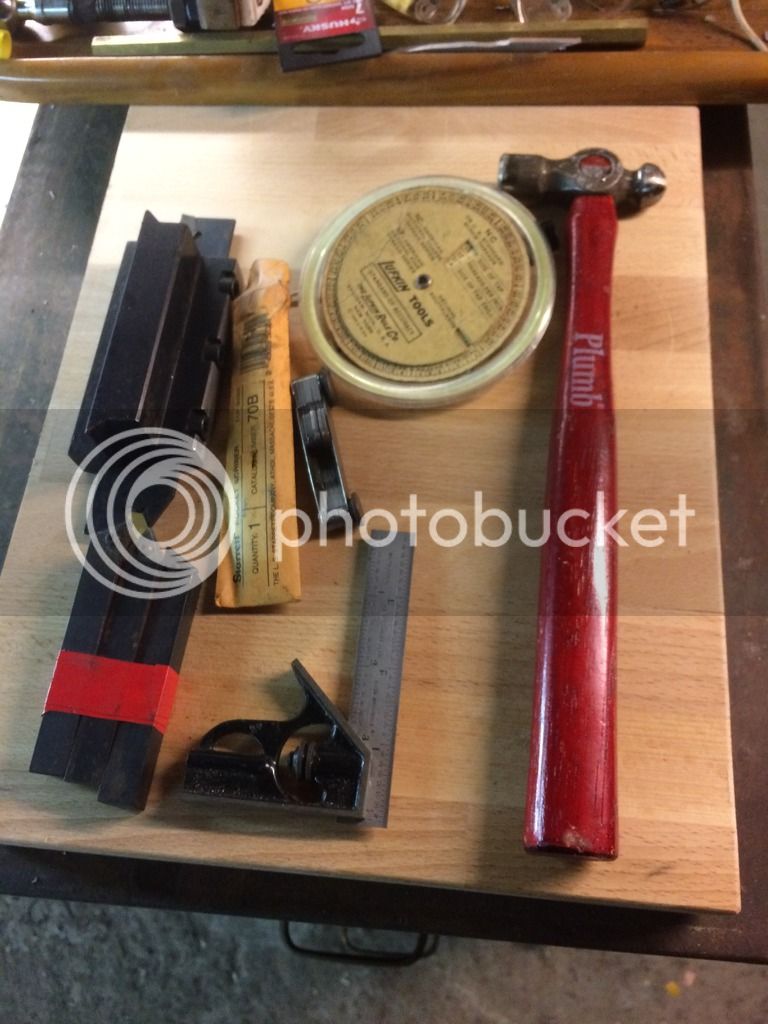 The tapping calculator and thread pitch gage will be useful and the LED light will be perfect for my small drill press.
I loaded it back up with some good stuff.
This is a great project, thank you Terry for organizing!
I will try to get this shipped in the morning but on Saturday at the latest.
Jon
J

Ken, 30lbs of steel, aluminum and cardboard on it's way to you this morning by USPS


Sent from my iPhone using Tapatalk

the lady that accepted it at my post office was NOT expecting 30lbs, haha.

Well from the tracking number they have not even received it yet.
How much can that size box hold? The last time I shipped it out last year, I though the guy behind the counter was going to have an attack or something by the look on his face.
Hey, need the address of the next person sent to me, From what I could find CookJ320 has not been on in a while. I will try to keep it moving once received.

IIRC, they limit it to 75 lbs ... but that might just be for international shipping.

kvt said:
Hey, need the address of the next person sent to me, From what I could find CookJ320 has not been on in a while. I will try to keep it moving once received.
Click to expand...

I sent him an email to give him a heads up that you have been trying to contact him for his address for sending the box. If you do not hear from him within a few days, let Autonoz or myself know, and we will go from there.

I also made a change to the list due to a member request. He will be travelling and asked to be moved down the list so that his absence does not hold up progress, and I have honored his request. So, be sure to refer to the list to see who follows you based on the updates.

Roger that, Also may take me a little bit to get at it fully, wife will be in hospital for a few days. but will get it out as quick as possible. May take more than a day or two.

No problem, Ken. Even though the box has been moving along very nicely the last few weeks, we know and expect that there will be small delays from time to time because life has a way of messing up our best laid plans.

Okay, I got an email back from cookj320 and he has requested to be skipped at this time due to an extremely busy work schedule. So, Ken, please contact vtcnc for his address instead.

Kvt and I connected this afternoon so things keep moving along. The next person after me wants the box shipped after April 8th.

vtcnc said:
Kvt and I connected this afternoon so things keep moving along. The next person after me wants the box shipped after April 8th.
Click to expand...

I moved that individual down the list a couple of spots as mentioned in post #112, so you will now be sending to FanMan instead.

terrywerm said:
I moved that individual down the list a couple of spots as mentioned in post #112, so you will now be sending to FanMan instead.
Click to expand...

Ok got it! Thanks for the correction!

Thanks everyone for keeping the box moving along. And a big thank you to you Terry for keeping the spreadsheet up to date. I have been really busy building a new shop and have had little time to get on here. Now that my shop is completed I will pay more attention to what is happening with the box.