POTD- PROJECT OF THE DAY: What Did You Make In Your Shop Today?

Today's quick project was to make a screen for the fuel filler of white elephant No:2 someone has helped herself to all of its diesel fuel. There is 10 ways they can go about stealing but this eliminates the easiest. I used some 3mm thick screen cut it till i could get it sideways then i used couple of drywall screws to secure it and they go in the holder for the pump nozzle so i won't cause any vacuum leaks with the evap system. That said its a diesel they aren't so concerned with evap. I'm pretty good at keeping my cars safe even my brother's cars have GPS and cameras but my brother isn't used to using the technology, funny enough this exact car has 3 gps units with 3 different companies and their accuracy is so different it's scary. 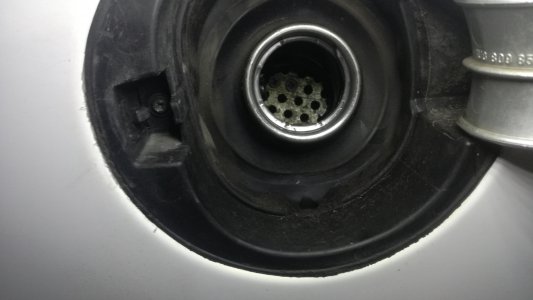 A neighbor wanted a 327 to put in a pickup he is fixing up, and we just happened to know someone who had a stash. We bought two blocks, two sets of camel hump heads, a crankshaft, and I ended up with this antique mechanical service jack. to make a long story short the block and crank are back from the machine shop, Monday, my son and I installed the cam bearings and core plugs, and I get to start putting it together, got the crank in today, to be continued.

Shootymacshootface said:
I bought this 3/8" impact gun used. This thing is an animal, amazingly powerful for a 3/8" impact gun. So, I used it for a bit after taking it apart and cleaning it. Everything was going well untill the f/r selector broke.
It looked like a good lathe project with very tight tolerance on the od. There is only 1 seal for the selector, its on the rear cover, an o-ring. The disks and the button next to the detent area are all tight tolerance areas that keep the air in the right places. I made the thin areas that broke .2" instead of .1", and both buttons are .07" longer for an easier press.
I can't tell a difference in power with the thicker small areas. I compared it to my Mac 3/8" impact gun, and the Snap-On gun has way more power.
View attachment 386764
Click to expand...

I have the Blue Point version I bought new back in 2005. Yeah she will twist some stuff for a 3/8s.

A buddy that likes the shooting sports (the one I made the concentricity tool a year ago) asked me to replace the barrel on his Glock 27 subcompact. He also asked if I could do a color match from the stainless slide to the greenish-brown frame. So, I did some Cerakote (a mixture of black, burnt bronze, and eastern front green): 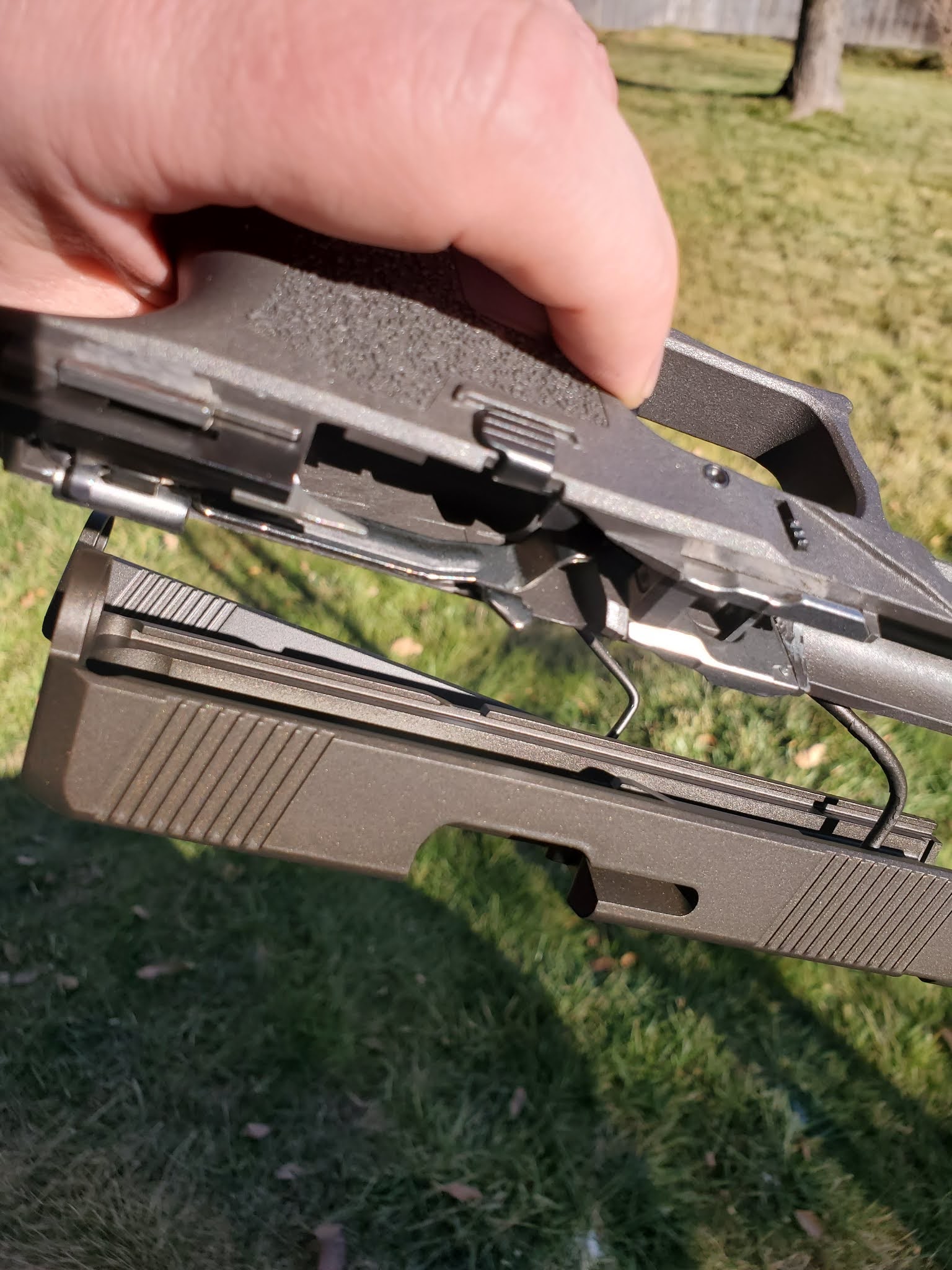 And then I had to track down a new barrel for him. Unfortunately, replacement barrels are not easy to come by unless you are setting up for competitions, I guess. The only barrels I could find were about an inch longer than the stock one. So, I tracked one down that was stainless, and then set about cutting it down to stock size.

Now, I don't trust outside and inside barrel concentricity - so I had to build a long bar with a center drilled on one end, a short groove on the other end for an indicator, and a 3" section turned down to the same diameter of the gauge pin that fit the inside. 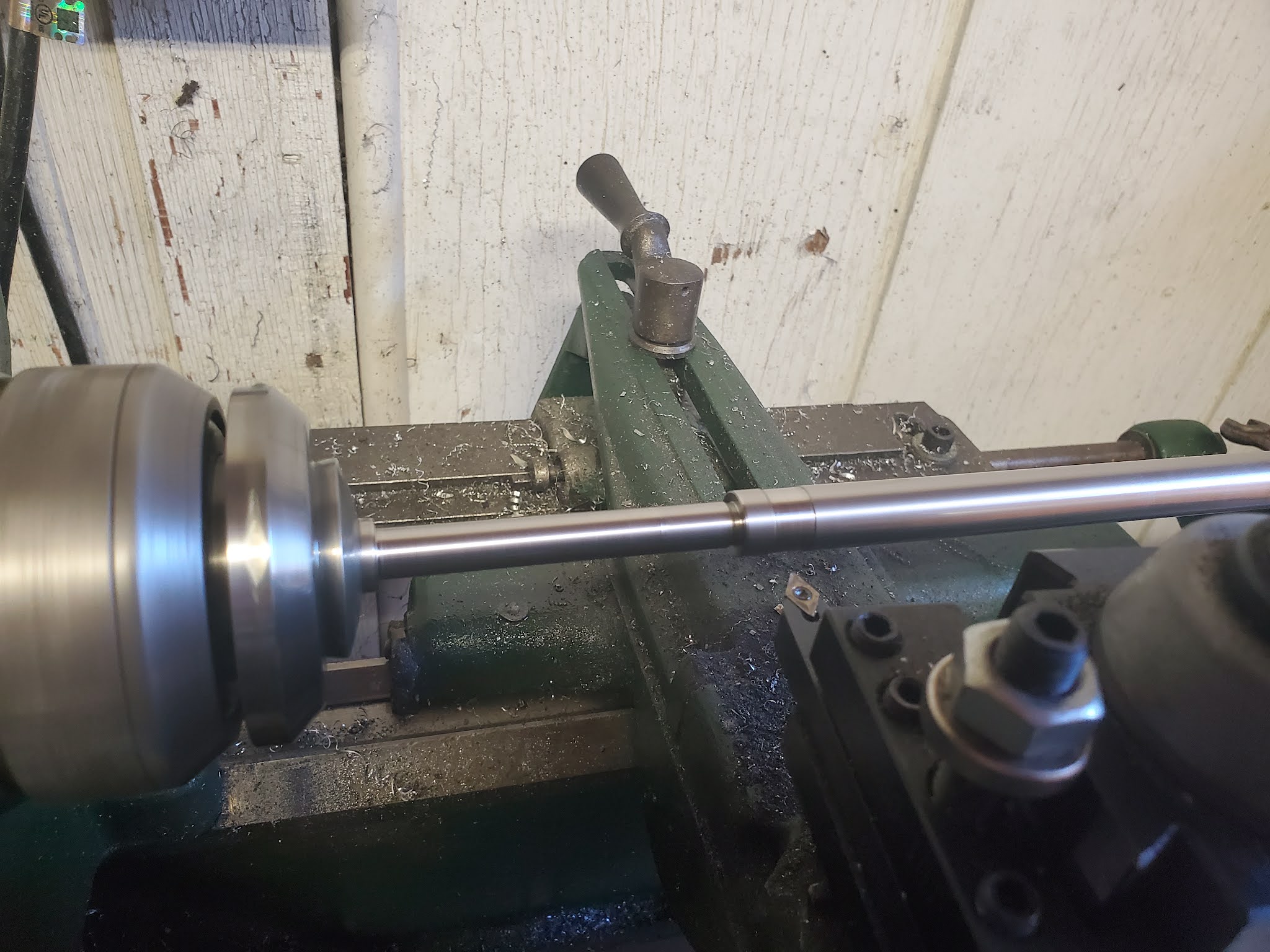 Then I got it parted off, and used it to hold the barrel while I trimmed it down to stock lengths. 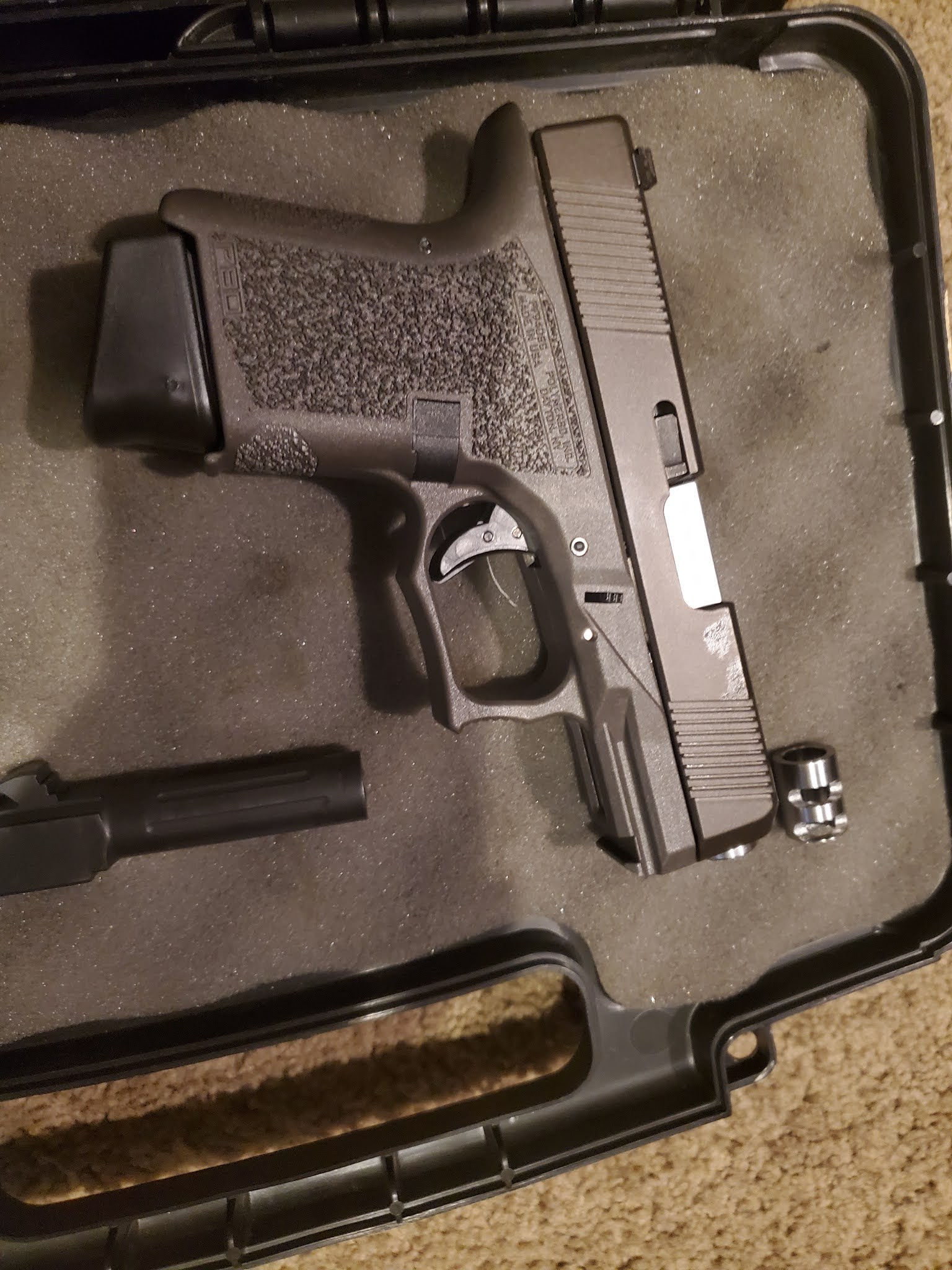 Looks good to me! I hope he'll let me test it, too.

fixed up my total blunder from yesterday.

Well, the 4 jaw is useable. So I plodded on. Had to clean up the part to continue. turned it, bored it for a homemade expanding mandrel so I could continue cleaning it up. then reloaded it in the 4 jaw and finished boring it and then relieving the inner hub. Because I lost so much cleaning up...

I've always wanted to buy one of those cam instillation tools but I needed one today, so I built one. It works fine in this configuration but I'll trim it down later. I ended up having to scrape a tight can bearing, easier to do on the table than the engine stand. I also had to massage the keys on the crankshaft to get the sprocket on. I always pour some oil in the small hole (marked by the white arrow) to provide some extra lube to the cam bearings, you know you've put in enough when it leaks out of the oil pump connection.

It's been 40 + years since I built my engine. so I don't remember issues with the cam installation other than getting the 2 dots or marks to line up, nor do I recognize that rod as a tool.
What's it do?

I've been around this stuff since I was a kid helping my big brother (+18 yrs) do a ring and valve job on his pre-war Chrysler, and I've always liked the Hastings Piston Rings man, big square jaw, a smirky smile and friendly wink. The instructions haven't changed much since then, except they're printed in six languages and too small for me to read. A connecting rod vice makes the job a lot easier now, back in the day you held them between your knees when wrapping the rings. I always take one of each ring, put it in the bore. square it up with a piston and check the gap. I don't care how much the gap is, the Hastings guy figured that out for me, I just want to make sure they all have a gap.

POTD was making a new pulley for my weight machine. Started doing a set and things sounded "funny". The pulley over the weight stack had split.


25+ years of use, finally split the upper pulley of our weight machine. 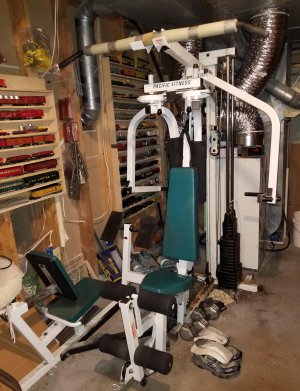 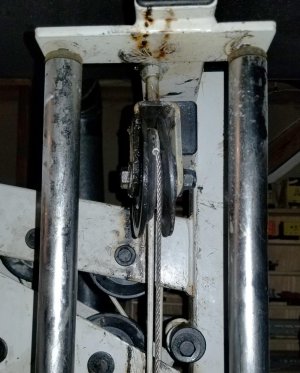 The machine uses a 3/16" diameter cable which I've replaced multiple times. I could see from the pulley face that the cable had worn the surface to the point that one side split. 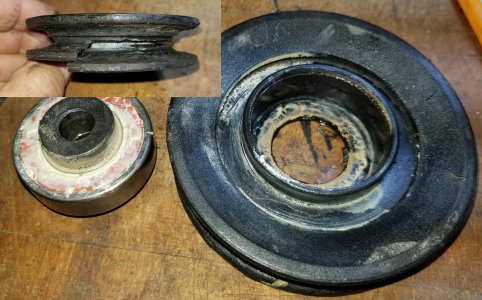 The bearing was fine, plan was to make a new pulley from aluminum. The OD was a little over 3 1/2". Started by cutting off a chunk from a 4" aluminum round. Faced both sides and drilled a through hole for mounting the blank on an expanding mandrel.

My plan was to turn the 4" round down to the correct OD, then face the right hand side to the correct width. I like this style of mandrel, but I've found cutting forces need to be from right to left or the mandrel will loosen on the tapered arbor. Well, best laid plans as even just working the RH side, the mandrel backed off the arbor a few times during turning. After getting the OD to size and the width cut, I changed to an expanding arbor for the shaping of the pulley groove. 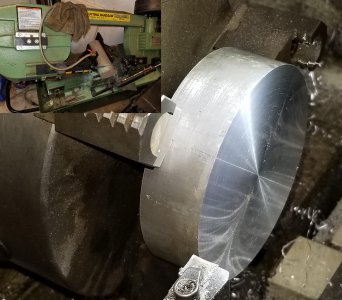 Turning the OD to size using an expanding mandrel 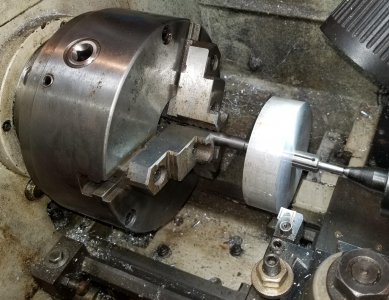 Faced the RH side to the proper width. The plan was to mount the finished pulley after the groove was cut in the 3-jaw and bore the center for the bearing. The extra shoulder of material would be removed then. 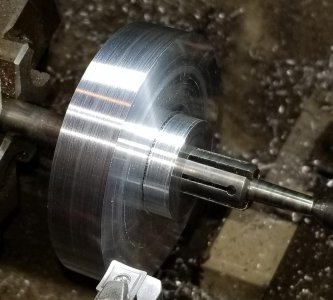 Mounted the pulley on an expanding arbor to cut the groove 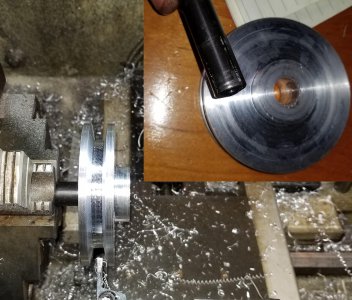 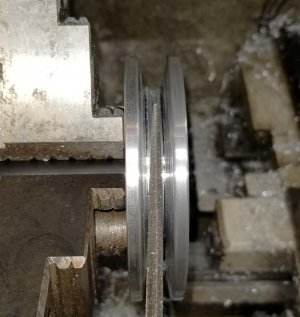 Bored a pocket for the pulley bearing. 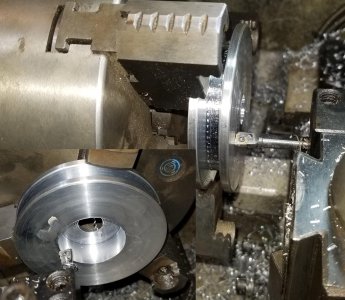 Oh, I know how observant guys are on this forum. No, I did not continually flip the jaws of my 3-jaw chuck from inside to outside and back to inside. My Grizzly 14x40 came with a 6" 3-jaw which looks too small. I upgraded with a set-tru 8" 3-jaw a few years ago, leave the inside jaws on the 8", outside jaws on the 6". I find it much quicker to swap chucks than to swap the jaws.

As an aside, I thought my DRO was acting up as the diameter number was fluctuating after making passes to form the "V". New one on me, the insert screw had loosened up so the insert was sliding in the tool holder. I guess I should watch the cut more than staring at the number on the DRO, would have obvious if I was concentrating on the cutting tool. The problem was when I retracted the tool, I didn't move it off the work so it dragged some when backing out of the cut which took the insert with it. 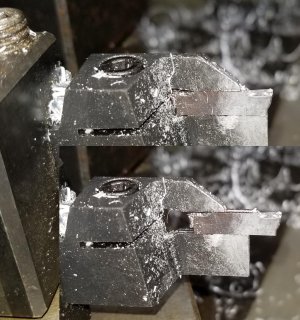 The bearing was originally very lightly pressed into the pulley. The original design had a bushing/washer on one side of the pulley to keep the pulley from walking on the bearing. I made this part from a piece of either Delrin or UHMW plastic (don't know which it was). Faced, bored a center hole to clear the center bushing on the inner race of the bearing, cut a shoulder to fit into the pulley. Lastly, parted to a width so the center bearing bushing extended out of the plastic bushing by 0.020". This was so the weight machine bracket clamps on the inner race bushing instead of clamping on the face of the plastic bushing.


Faced, bored, checked fit of the shoulder to the pulley and parted 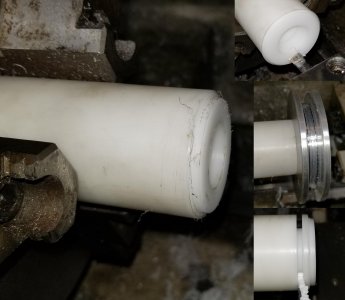 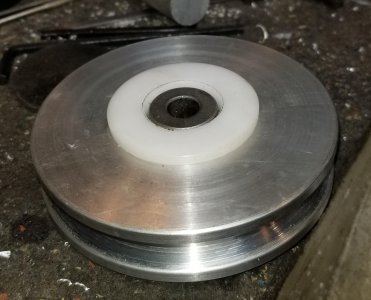 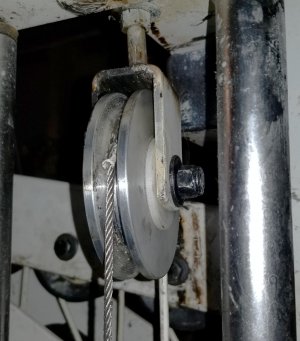 Bruce
You must log in or register to reply here.
Share:
Facebook Twitter Reddit Pinterest Tumblr WhatsApp Email Share Link
It can take up to an hour for ads to appear on the page. See our code implementation guide for more details. If you already have Auto ad code on your pages there's no need to replace it with this code
Top