Well last week did a near by auction over the net. Listing was a r8 procunier tapping head. Along with a cabinet and nice 2’ cast iron surface plate. 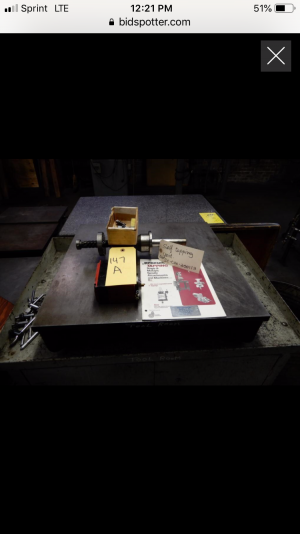 I ended up winning the listing which was good. 52 dollar lot. I end up picking it up today and got some surprises. The good I opened the cabinet and their was a dumore grinder box. It has 4 different spindles, wheels, arbors, pulleys,belt but no motor. That’s ok. Wasn’t expecting it but I’ll take it. Also 6 chuck jaws for cushman chuck which I’ll see if they fit the one I have. A pile of new Jacobs drill keys all sizes which who could use a spare. Then a 2’x2’ HEAVY cast surface plate which has to weigh every bit of 300*.
The bad thing is I don’t think this red apparatus is a tapping head?? It’s possible but I can’t figure it out. Their is NO r8 arbor to it, when the shaft is spun it translates the motion to the upper spindle which has the gold screw/ flange ears on the end of it. Then the large shaft on bottom has a inner helical shaft that moves linear. The helical shaft has a hub on the end with through holes around it??
It’s a nice looking piece, well built and I don’t think it’s shop made but their are NO numbers on it for a clue? I’ve looked in the manual they supplied and can’t find anything that looks even close to it?? Anybody have a clue as to what this is??? 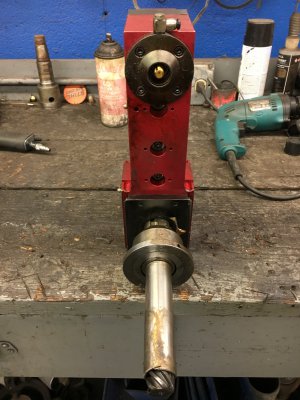 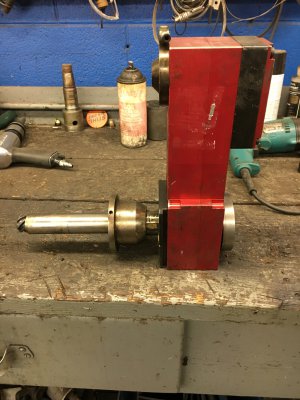 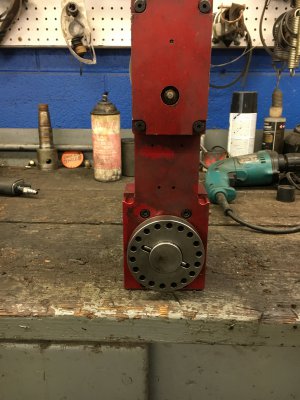 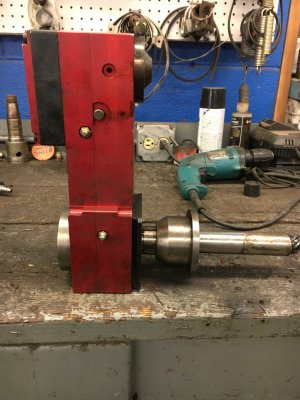 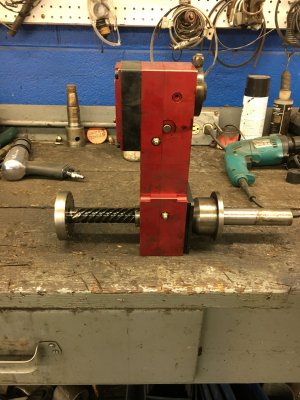 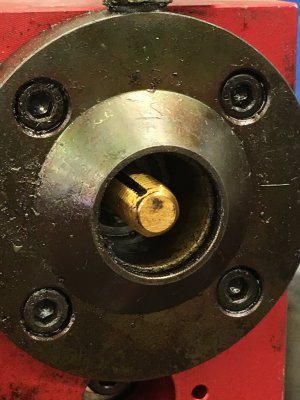 After alittle searching I found what it is. It is a in die tapping head. After learning that I can see how it operates. Pretty trick tool but for a production environment. Will see if eBay can move it.

Congratulations on getting all those goodies for $52 - but sorry to hear the "procunier" tapping head was not as advertised. Was that the main reason you bid?

hman said:
Congratulations on getting all those goodies for $52 - but sorry to hear the "procunier" tapping head was not as advertised. Was that the main reason you bid?
Click to expand...

I'm in the market for a tapping head and the listing title said "R8 procunier tapping head". I knew the surface plate was with the listing and my thought was the cabinet had all the collets and whatever is used with the attachment. I was wrong on the contents but a good wrong I guess. It was the tool post grinder cabinet. Bad thing is they took the motor Assy. Out and sold as a separate listing. I wasn't in the market for one so I didn't pay attention. Now I need to round up some material and a motor to make me a tool post grinder. For the fifty bucks I knew I was ahead either way. I now have everything I'd ever need for tool post grinding. 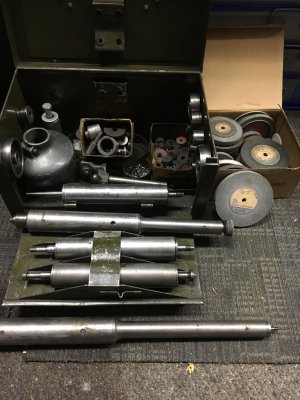