Bob Korves said:
Jay, if I understand the problem with the Accusize holder correctly, feel free to bring it by sometime and we can touch it up on my surface grinder.
Click to expand...

Thanks for the offer Bob. I'm up your way for work every month or two. Next time I'm scheduled that way I will let you know and see if our schedules work out.

jbolt said:
Thanks for the offer Bob. I'm up your way for work every month or two. Next time I'm scheduled that way I will let you know and see if our schedules work out.
Click to expand...

OK, Jay. I also have a Phase II BXA tool post on my lathe to test it and compare it.

To add a CXA data-point to the mix, I can say that the CXA sized Mdl. 250-301 holders I recently got from Shars (I think they are same marking/appearance as Phase II 250-301), all fit my tool holder very well. I bought 5. It was a pleasant surprise. One of the 5 was a tiny bit snug and bound a little when fully installed. At some point, I'll tune that one up a little. It could just be a burr or something. I was just on Shars and they don't seem to have that one anymore but like I said could very well be same Mfgr. as Phase II.

TomS said:
Thanks for taking the time, and spending the money, for this test.

Interesting comparison as well as unexpected results. As Tom said, thanks!
B

jbolt, outstanding write up. Thanks for saving me a pocket full of cash. I'm in the process of getting tooled up for my new PM 1440 GT and was going to order tool holders this morning.

Any thoughts on doing tool post comparisons? Thanks again for your time and effort.

I have purchased BXA holders from several vendors, all inexpensive Chinese stuff. Phase II (from Enco), CDCO, All Industrial, and perhaps another seller. All of them work fine, no issues. The best looking, best fitting, and with the best tool screws are the ones I got the cheapest ($9 each) from CDCO several years ago. That may not be true today, the last thing I can say about Chinese stuff is that they are consistent. The best overall deal I made was from All Industrial on some 201-XL holders. I found them at a good price from All Industrial on eBay, but did not like the shipping charges. I called All Industrial, gave the person on the phone their part number that I gleaned from eBay, and asked him for the best price they could give me ordering direct, including shipping, and excluding eBay's cut. In about 15 seconds he gave me an incredible price on three of them including shipping. They arrived in a couple days. All Industrial's catalogue sucks, but they are great to do business with.

I think it might be worth trying the same ordering scheme with Shars, where I have only bought one item. Their total price seems to be higher that the others, and the products about the same. Give them their part number and ask for a great total price, including delivery.

I recently purchased 10 CXA standard holders from the All Industrial web site. I don't know if it still the case but on orders over $49 shipping was free so it made the overall cost per unit less than CDCO. The fit and finish on the All Industrial tool holders is much nicer that the CDCO. The upside and downside to the standard All Industrial holders is they are longer than the standard CDCO holders which puts the set screw spacing farther apart. Great for longer tools but on some of my 5/8" shank tools they would only be captured by 2 set screws.

Billy Dixon said:
jbolt, outstanding write up. Thanks for saving me a pocket full of cash. I'm in the process of getting tooled up for my new PM 1440 GT and was going to order tool holders this morning.

Any thoughts on doing tool post comparisons? Thanks again for your time and effort.
Click to expand...

I started with an Aloris BXA tool post on my PM-1440GT. I have since changed to a Bostart CXA mounted on a solid base. I did this because some of my customer work has a lot of material removal and I needed the most rigid setup I could do. The CXA is not necessary for %99 of most work and not necessary for hobby work. However it does fit fine on the PM-1440GT on the compound.

The Aloris has a much better fit and finish than the Bostar. I remade the center shaft'nut that holds the unit together to get rid of the slop. The wedges are much looser than the Aloris and there is nothing I can do about that. As far as performance goes I don't believe there is any difference. If I come across a used CXA Aloris or Dorian tool post in good condition at the right price I will probaly swap it out just because I like they way they feel.

I do have my Aloris BXA tool post and various BXA holders for sale in the classifieds here. PM me if any of that is of any interest to you.
D

1) CDCO Holders though covered in oil, arrived with surface rust on the Set Screws, requiring cleaning to have them screw in and out smoothly.
2) The finish of the Phase II holders is cleaner/nicer. The CDCO holders have dings and marks on all the surfaces, while the Phase II holders are ding and mark free.
3) The Dimensions, Holder to Holder, are more consistent with the Phase II holders. All the dimensions are with in 0.001" of each other, Holder to Holder. On the CDCO holders the same measurements holder to holder varied by as much as 0.010".
Though, the difference shouldn't effect the performance of the holders, I think is speaks to Manufacturing Controls.
4) Of more importance.... I found on 2 of the 5 holders the bottom surface, where the tool rests (Opposite the set screws) was not square with the bottom of the Holder. I don't have access to a surface plate, so I can measure squareness that way, but I put a square along the back and bottom of the holder, and found it to be square. Measure from the bottom of the holder to the bottom tool surface, I found about 0.0015" difference front to back. Again this shouldn't effect things, but if it were greater, it could start to alter the angles of one's cutters.
5) The Dove Tail and back surface of the Phase II holder were ground after the black oxide coating was applied. On the CDCO the dove tail was ground before the Black Oxide was applied.


Overall for nearly 1/2 the price of the Phase II, I'd probably purchase them again, unless other's have found higher quality, for a price similar to the CDCO's, with other brands. 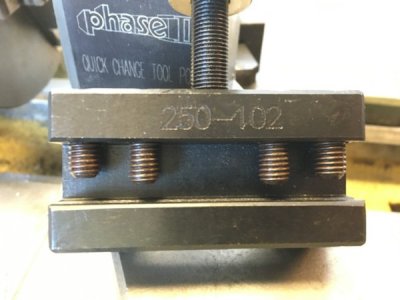 Rust on Set Screws of the CDCO 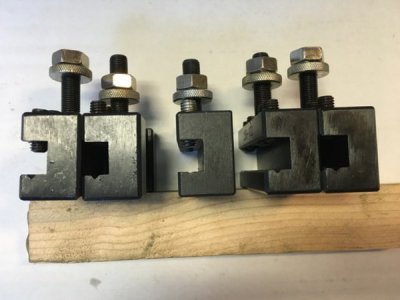 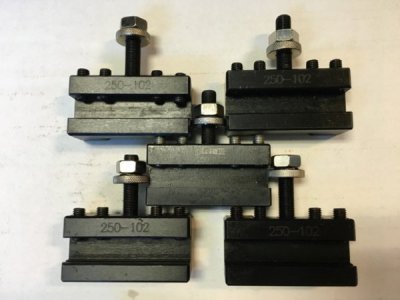 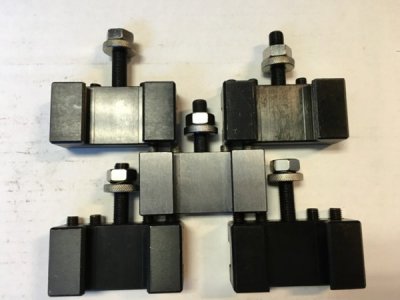 Phase II in the Middle. It's hard to see in the image, the Phase II holder dovetail and back surface are a smooth Ground Surface. On the CDCO holders, the Black Oxide finish was applied After Grinding. Given Heat is used to create the finish, it would be better to grind the surface after creating the black oxide finish, to reduce any effects from the heating, as with the Phase II 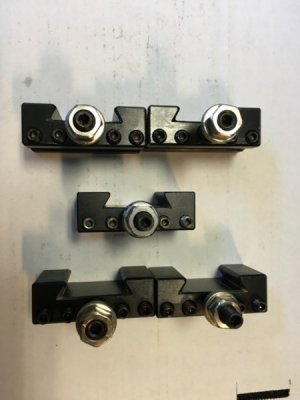 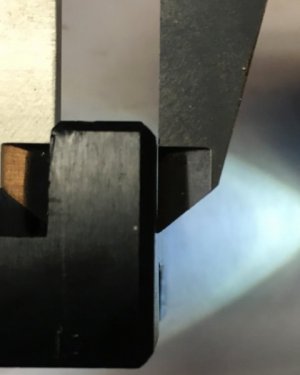 Bottom tool surface not Square. The Picture shows the gap between Jaws of my calipers on the bottom of the holder, as I couldn't get a good picture trying to show it on the bottom of the surface where the tool would sit.
Last edited: May 22, 2017
You must log in or register to reply here.
Share:
Facebook Twitter Reddit Pinterest Tumblr WhatsApp Email Share Link
It can take up to an hour for ads to appear on the page. See our code implementation guide for more details. If you already have Auto ad code on your pages there's no need to replace it with this code
Top