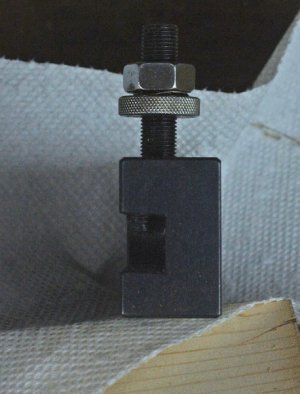 Picked up (4) AXA holders from Shars this month. (2) #2's 250-102, and (2) 250-101XL.
I'll have to say that I was pleasantly surprised by the quality, except for the Vee grooves in the 102's.
Packaging was excellent, wrapped in plastic and individually boxed properly.
The outer machined surfaces are good all around, no jagged-ness anywhere except in the slots.
The hardware is also decent. Had to wire brush off the oxide on the large set screw and all screws operate smoothly.
I stoned the slots and didn't like the looks of the bottom of the slot so I ran them through the Mill to clean them up.
All (4) fit properly on my Dorian post.
You must log in or register to reply here.
Share:
Facebook Twitter Reddit Pinterest Tumblr WhatsApp Email Share Link
It can take up to an hour for ads to appear on the page. See our code implementation guide for more details. If you already have Auto ad code on your pages there's no need to replace it with this code
Top