Started a small project this week to help with some other work.
I needed a hex hole in the end of a rod - therefore I needed a rotary broach.
This was the sketch I came up with for a simple broach.
The tool bit will be made from 1/2" W1 Steel and the other body parts from Stressproof Steel.
The bearing is a 1/2" ball from McMaster Carr. 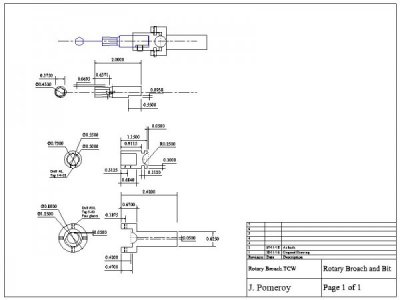 To make the cutters, I made up some angle plates that allow the spin indexer to sit at 2 degrees to the table.
I started by cutting the six flats to the correct depth and then added the recess at the root of the cutter to make the sharpening easier on a diamond plate.
With the recess there was no risk of the shoulder riding up on the plate and changing the angle at the cutter tip. 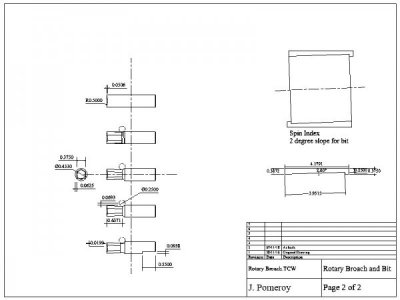 This is the assembled broach with a hex cutter installed. 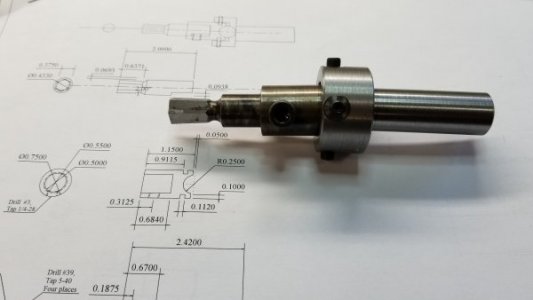 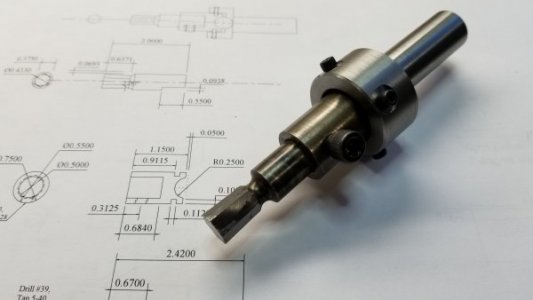 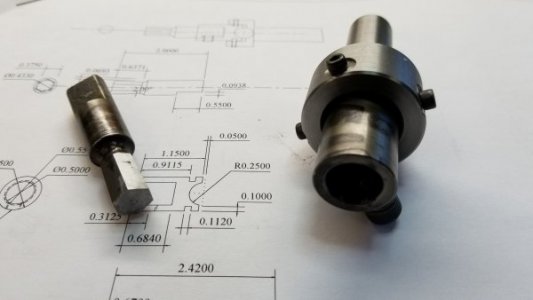 The cutter holder rides on a 1/2 inch ball held in two sockets. The sockets in the body and holder were cut with a 1/2" ball end mill. 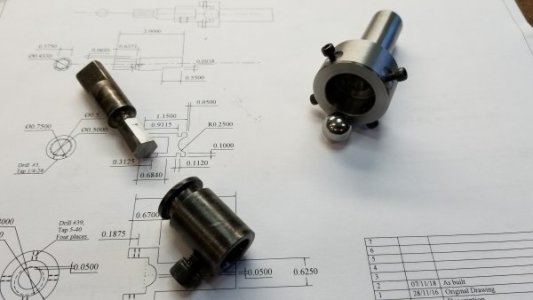 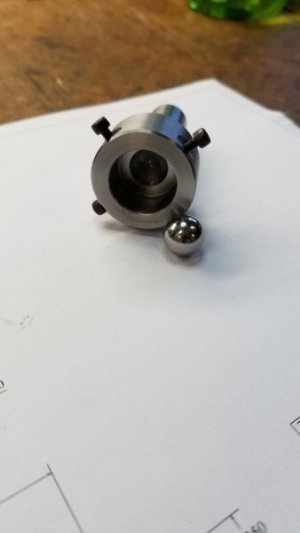 Cutter holder and the bearing. The body, holder and ball are assembled with some EP grease between them. 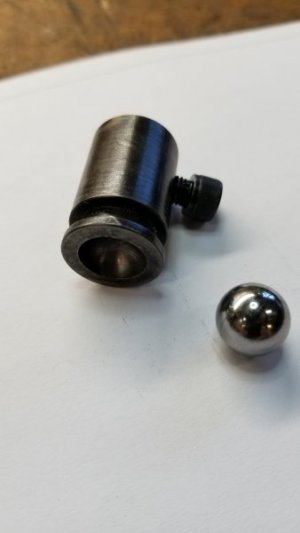 The groove in the cutter holder is for the four 5-40 screws that hold it in the body when not in use.
If the sockets for the ball are not exactly as shown, the groove has to be modified to ensure that the screws do not touch the sides when in motion.
Both the cutter and the cutter holder were hardened via torch and then tempered for 4 hours in a 450 degree F. sand bath. The tempering left both still quite hard but could certainly be marked with a file.
Once they were cleaned up, the bore of the cutter holder had to be honed to fit the 1/2' shank of the cutter. Used a shop built blind hone of aluminium and 3000 mesh diamond compound.
The end and flats of the cutter were then sharpened on a 320 grit diamond plate. 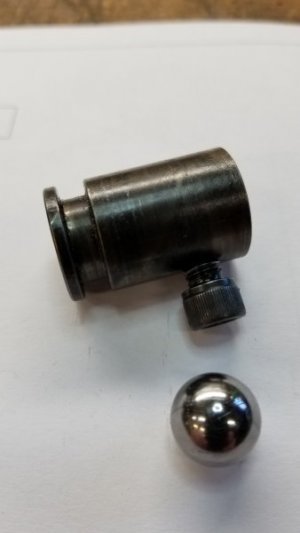 The cutter worked fine on aluminium and would not have a problem with brass. I will have to try on mild steel to see how it goes.
This cutter was 0.375 across the flats and 0.433 across the points. The rod was drilled with a 5/16, 0.350" deep and then counter drilled with 7/16 0.05" deep to allow the bit to centre on the hole.
Sorry for the quality of photos of the rod end, but it did seem to cut a very acceptable hex shaped hole. 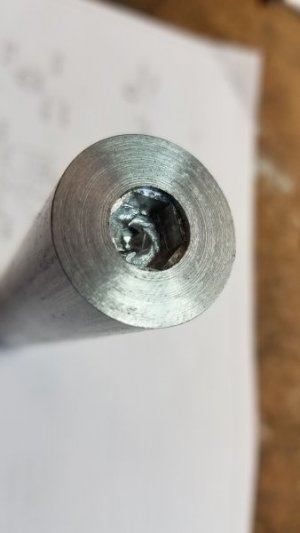 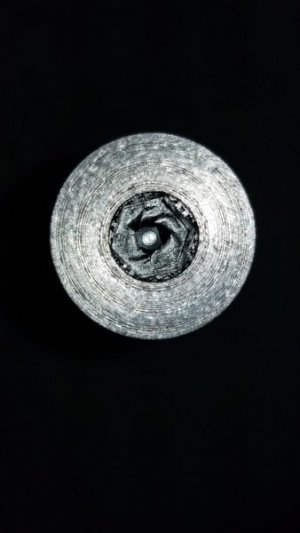 Very nice. Thanks for posting.
I am having a hard time telling from the prints which component has the offset to provide the angular motion. Is the depression in the shank offset?
Robert

rwm said:
Very nice. Thanks for posting.
I am having a hard time telling from the prints which component has the offset to provide the angular motion. Is the depression in the shank offset?
Robert
Click to expand...

Thanks for the comment Robert.
The shaft of the body is offset by 0.050".
As a result of the offset and the wobble, you need to drill a shallow counter bore that is used to align the cutter prior to starting the rotation.

Very Nice, thank you for the drawings.

Very Nice, thank you for the drawings.
Click to expand...

Thanks BaronJ.
As noted in the description, the groove in the cutter holder needed to be adjusted so that the retaining screws were clear during the oscillation.
I expanded each side of the groove by about 0.015". As I moved the holder around in the base, I could tell when the holder would ride on the rim of the base for the entire circumference. In reality, with the length of the cutter that I made this time, I could have got by with 0.006" increase in width on each side of the groove but wanted to be safer. There is no stress on the lip of the holder groove when the broach is in action.
Jim

The only suggestion I would make is to dispense with the screws and use a rubber cushion. A thick "O" ring springs to mind.

The only suggestion I would make is to dispense with the screws and use a rubber cushion. A thick "O" ring springs to mind.
Click to expand...

I could give it a try. The screws are only there so the holder doesn't fall out of the base when it's not in use.
You must log in or register to reply here.
Share:
Facebook Twitter Reddit Pinterest Tumblr WhatsApp Email Link
It can take up to an hour for ads to appear on the page. See our code implementation guide for more details. If you already have Auto ad code on your pages there's no need to replace it with this code
Top