Scraping in all bearing surfaces on my Wards/Logan 10"

Rex Walters said:
I read a "zero to 0.0008" spec as "just don't angle it away from the operator and if anything favor toward you slightly." No?
Click to expand...

I think the purpose of those specs are for allowing a longer time of usage before being out of limits again, i.e., the job lasts longer, and is more practically accurate in the real world where there is more than a DTI point pushing against things. Doing 'perfect' work when reconditioning a lathe will give you a nice, warm, fuzzy feeling, but with first usage accuracy will be deteriorating. Think of the specified tolerances allowing "final lapping to perfection while in service..."

Bob Korves said:
Think of the specified tolerances allowing "final lapping to perfection while in service..."
Click to expand...

Well, another way to think of intentionally misaligning in this way might be “Only at some unpredictable point in the future will the machine be in alignment — it will be out of alignment both before and after that point.”

Still, I get the point that (unpredictable) part weight and tool pressure will cause wear and deflection.

I’ll follow your (and Connelly’s) advice to slope the tailstock and spindle tapers ever so slightly upwards (a few tenths at the end of a 12” test bar). Frankly, this is so close to dead level that I suspect it’s outside my ability to measure, much less scrape reliably.

The whole idea of introducing a machine tool into a production environment knowing that it will wear into spec., then work it's way back out through use, is bizarre. IMHO
It's like a break-in period. Maybe that was the idea?

Here's the picture of the setup for indicating both sides of the "step" on the top of the tailstock base: 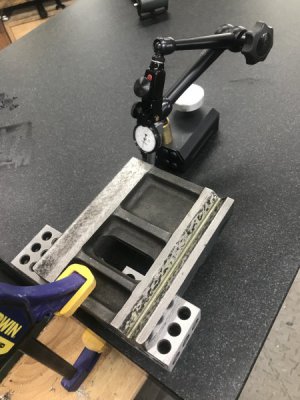 You should also check your matched pair of 1-2-3 blocks if you do this kind of thing: 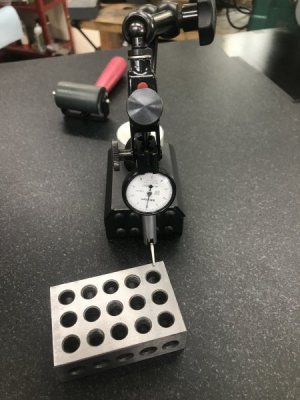 Mine are cheap blocks and I was a little annoyed to find that one side of one of them was about 0.0002" thicker than the other. Still good enough for what I was doing, but I eventually just used the single better block to clamp the piece off of the surface plate.

The top of the tailstock base was WAY out of flat (it was never precision ground). It's taken quite a bit of scraping to get it anywhere close to flat, and I've still got a "hole" in the middle of the back end (bottom of the photo) but here's where I left off: 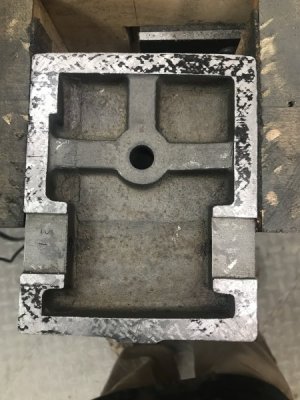 I've made one pretty bad boo-boo. The step between the tailstock base and top half needs to be a very tight fit as it keeps the top from twisting in the horizontal plane. In order to leave some room for the "overstroke" while scraping the top of the base part (its quite hard to scrape to a square corner) I needed to file (and eventually mill) some clearance (see the photo in comment #2). I used a file with a safe edge and carefully indicated before milling, but I must not have been careful enough because I can now twist the top half left and right about +/- 0.0025" —much more than I'm willing to allow.

When I'm finished matching the bottom of the top half to the base piece, I'll likely take a careful milling pass on both pieces, then glue in some sort of permanent gib-like piece onto one side of the channel in the top half, and mill or scrape to a tight sliding fit. I'll allow several tenths of slop, but not +/- 2.5 thou!

Rex Walters said:
Here's the picture of the setup for indicating both sides of the "step" on the top of the tailstock base:
Click to expand...

The parallax in the photo makes it look like the clamp is between the two clamps (not the case — I was squeezing directly onto the right one). It's important, of course, not to clamp someplace that doesn't have support (you'll definitely distort the part).

Confidence level is through the roof now. I've got the tailstock finished. Woo hoo!

Less than 0.0002" along a 9 or 10" test bar in both the vertical and horizontal planes. Since my individual scrapes themselves are about 0.00025" deep this really amazes the engineering nerd in me. Behold the glory:


The horizontal plane is also well under one indicator division over the full length of the test bar.

The stack of potential errors is astonishing:

Before anyone asks, NO I AM NOT GOING TO EVEN LOOK AT IT WITH MY TENTHS INDICATOR. (Laugh) Seriously, two tenths at the end of a foot long bar is so crazy precise that even breathing on the thing (literally, I think!) will affect the results.

When I first indicated in the vertical plane after flattening the bottom of the upper half, I almost freaked out. The end of the bar at the headstock end was 0.0065" lower than the other end. I thought I was going to be scraping for days (at roughly four passes per thou, I thought at first I'd need 24 passes).

Then I realized it's over a foot from the back end of the tailstock. Tiny little changes back there have a big effect at the end of the bar. Whew.

In the end it only took me a couple hours at most to get it to the point you see in the video.

Since the upper half of the tailstock has a channel rather than a bump, I could just mark it up on the surface plate. After getting it roughly flat (maybe 5-10 PPI) I inked up the bottom half and checked the fit. I was extremely gratified to see almost identical markup using to the bottom half as I did with the plate (proving I did a decent job scraping in the bottom half despite the bump). Cool.

So I spent the next several passes fitting it to the bottom half. Once I had it bearing pretty well everywhere (maybe 15-20 PPI) I blued it up once more on the plate.

And almost had a heart attack. It was bearing on only a few points! What on earth had I done?

Eventually (walks, cursing, coffee, etc.) I realized that the clearance grooves I'd filed into the bottom half had come back to haunt me. Since there was no bearing where I'd filed the grooves, and I'd gone through a dozen or so scraping passes, those areas on the top half hadn't been scraped at all and were now proud by a few thou. I forgot to take a picture of the original mark up, but here it is in the middle of one of the corrective passes: 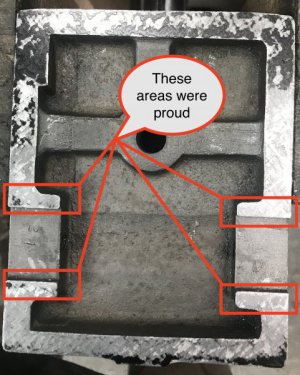 Anyway, today was a good day.

Next up is the headstock. Hopefully the results will be equally good.

Nice work, just a quick quesiton, why have you not duplicated the King Way Alignment Tool? I really like the one I built. Tim

astjp2 said:
why have you not duplicated the King Way Alignment Tool?
Click to expand...

Good question. At least in part because I don’t have a working lathe at the moment! (Laugh)

I also need to acquire some leveling tubes and figure out a way to manufacture the C-shaped foot part.

How did you make the latter? I’ve been thinking of modeling it and sending it out for 3D printing in sintered metal.

I turned a pieces of cast iron bar down in the lathe, put 2 rings on it, then drilled the mount holes so a mag base stand would fit in it. I posed pics on here of the one I uses to measure my rockwell lathe. Here are a few pics of it. Do you want to borrow it? I made 2 different sizes.

What tools to buy?

You maybe right for most cases, but not always Tony, I bought a CMM that had a inspection certificate as lapped AAA grade. I bought it 10 yrs or so at a 3M silent auction they have up here ever few months. It also came with a self leveling 3 point stand. The wires looked like a cob web so no...

Rex, looks good. I didn't read it word for word....though.... Be sure to relieve the middle 40% of the slides approx. .001" so they don't rock. Be sure to lock the tailstock down when making the tests, That test bar in the TS quill is a bit long. I would also use some Phenolic between the TS halfs that is glued down. Good scraping you must have had a good teacher
You must log in or register to reply here.
Share:
Facebook Twitter Reddit Pinterest Tumblr WhatsApp Email Share Link
It can take up to an hour for ads to appear on the page. See our code implementation guide for more details. If you already have Auto ad code on your pages there's no need to replace it with this code
Top
AdBlock Detected