Shimming a chuck to the spindle

I recently bought a "Set-Tru" type ER-40 chuck with D1-4 camlock mounting. With the studs properly adjusted the chuck does not flush against the lathe spindle. The lathe spindle checks very true. The instructions say to shim the chuck back plate to the lathe spindle if needed. I don't want to go through shimming each time I change chucks! The chuck is dialed in concentric and running on axis. I can slip a .0025" feeler gage between the back plate and the spindle on one side.​
I can see two options. Mount a 3 or 4 jaw chuck. Turn a piece of steel to 1" (largest that will fit my ER-40 collets.) With a 1" collet in the ER chuck, mount it face to face with the other chuck and face the back side of the ER. That seems risky since the collet will be holding considerable weight and the force of turning the hard steel body will also be working on it. However, since the ER has been dialed in using a gage pin to less than .0003” total runout, if nothing shifts while facing the back all would be pretty good. The catch is that the carbide insert turning tool will be under greater force for ½ of each revolution working with considerable leverage due to the diameter of the chuck. . An alternative to facing would be to do a tool post grind. Less force, but I only have a home made grinder setup. At least I could check the progress with an indicator mounted to the cross slide. Coat the backing plate with Dykem to see progress.

2nd option is to actually “”shim” with some metal filled epoxy. Coat the parts with release agent that I don't want anything on and ultra clean the other. Coat the surface and install the chuck. Let it set up. Remove and clean. No forces acting on the collet system for this process.

For darn sure I want to remove and install the chuck several times and check that it always returns to the same position before I do any of this.

This chuck ran “off-axis” when I got it. I.E. when the set-tru was adjusted to make the indicator run on center when close to the chuck, it would run considerably off center when the indicator was moved 1” away. In essence swinging a conical shape. I corrected that by facing the back plate surface that goes against the chuck. I also had to turn down the hub some to get enough adjusting room to center the chuck using the set screws of the “set-tru.”

Last observation: It seems like asking a lot to have the taper of the spindle to seat at the same time as the face touches. I always tighten the cams by steps.
Any suggestions are welcome since as usual I have no idea what I'm doing.

I would mount the chuck on a bar as you suggested and machine the adapter to fit. And yes, both the taper and face should seat at the same time. Requires a bit of fiddling to get it perfect.

Here I'm doing roughly the same thing on my 4 jaw 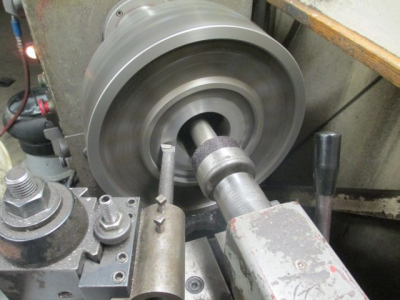 A third option would be to buy another back plate that fits the spindle well and fit the chuck to the new plate.

A fourth option is to do nothing. As long as the chuck mounts solidly every time then it doesn't matter if the plate doesn't touch.
L

I opt to try turning a piece of steel to 15/16". W/O removing it from the 8" 3 jaw, I mounted the ER-40 cuck face to face on it. Put a new insert in a 5/8" turning tool and tried a cut @ .002" deeper than the shallowest required. Power feed. 380rpm, out from center opening. OK until the tool reached the bolt openings. Bad idea, interrupted cutting with carbide! Changed insert, slowed rpm and continued. Got it finished and checked the rather ****ty finish with a straight edge, good. But when I put everything back together and mounted the ER chuck with a gage pin for reference there was still a gap between the back of the back plate and the spindle. It was less than before but still there. Caused, I suspect by flex in everything involved trying to cut hardened steel with too shallow of a cut with an insert. I do keep the compound pulled back & locked. My cross slide gib is snug enough that I don't get any creep on facing cuts. I watch the DRO for that. I have market both the back plate and the chuck with punch marks so I always get them mounted on the machine the same way.

I mounted the ER chuck, centered with the the gage pin using the "true-set" screws.

I removed the ER and shifted it one cam stud just to see, as expected then way off, .004". That in spite of the fact that I always do a chuck mount by first just barely snugging all cams starting at the one closest to the reference mark and going around the chuck a 2nd time to bring it to full tight. Tried again with 3 laps around going progressive tightening, same result.

Next?? May set up my home made tool post grinder and see how that goes. If I can't get rid of that gap I'll never get good repeat. I've mounted all the rest of my chucks and they all repeat decently and none of them have any measurable gaps to the spindle. I'm bound and determined, but it is wearing me out.
You must log in or register to reply here.
Share:
Facebook Twitter Reddit Pinterest Tumblr WhatsApp Email Share Link
It can take up to an hour for ads to appear on the page. See our code implementation guide for more details. If you already have Auto ad code on your pages there's no need to replace it with this code
Top
AdBlock Detected