Please click on this notice to be taken to the Site Support Forum so you can learn more about what happened, what is being done and post a support request so we can help you get your issue resolved.

Generally, I regard setup tooling as permanent fixtures/ jigs that serve in a restricted sense, suitable for limited operations or parts. Does not apply in every case, but any can envision fabbing up something, that spends the rest of it's life collecting dirt on a shelf. If it works; name it, take a picture of mounted part, creating a reference for later.
Other times, a collection of simpler items does the trick, parallels in this case. Great supporting part in a vise, until opening to load another. Coolant knocks them over, chips get underneath them, or they fall while reloading.
Grrrrrrrr.
Now, before asking for pictures, a valuable trait of machinists is cultivating ability to visualize. . .besides this isn't MTV, I'm not Peter Gabriel or David Byrne.
I'll offer set of favorite hacks regarding parallels and machining vises. We've seen many; separators [spring loaded tubes outside the jaws], or coil springs bearing against them, or two drops of fast-set glue, or magnets, or rubber bands [!], or nothing at all....
I use strapping tape, the steel variety binding loads to pallets. I simply cut a length and form one of three ways, depending on part width.
#1 is hair-pin like, one leg longer than the other. Longer is convexed to contact ends of parallel, the shorter hits middle of opposite bent with a little snow ski like tip. That keeps it or parallel from moving out of jaws opening/ closing on repeat parts.
#2 is great when drilling; a simple U-form, with ski tipped ends.
#3 for wide items; roll a circular length around 3x the jaw opening and lap the joint with a strap clip or bend acute interlocking hooks.
#Freebie. I don't work production; but time saved means I work on my own projects. When possible, instead a lot of deburring, use 4 parallels. Outboard of those supporting workpiece, insert shorter parallels at the jaws. Instant chip and burr clearance.

These work great ! Or try some double sided tape on regular parallels . They won't move .

I use banding, too. Another thing that works well for a lot of jobs is short chunks of the foam insulation used to keep pipes from freezing. It has size limitations as to work size, but can be used multiple ways to increase the range.

I made a set of parallel holders from aluminum and rare earth magnets. Stole the idea from a seller (there are multiples) off eBay. The price is usually under $15 for 4. They work well though they do accumulate chips. The accumulation is outside of the jaws on the sides of the vise so no harm, no foul. Just have to remember to not clear the chips by hand since I don't always remember where my tweezers are.

Like Bob mentioned, steel strapping bent to a "V" and Styrofoam works well too. 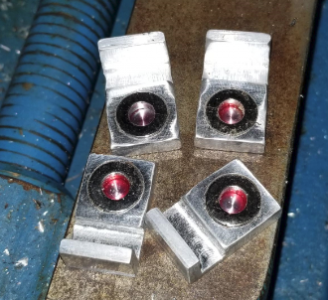 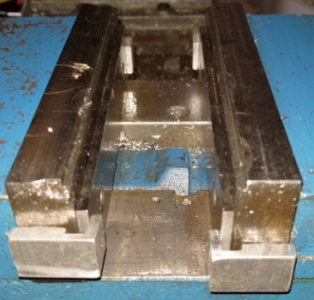 I use a drop or two of bar & chain oil or a touch of grease. Movable jaw will break it loose sometimes but I just put it back and it sticks. But after seeing these suggestions, I think I'll make a set like Bruce has cause I need another project
Chuck
C

On a few occasions I have used the wavy parallels to hold the solid parallels in place. But most of the time I use nothing. I like to remove everything during part changing so I can get all the crap out. I don’t have problems with parallels, am I all alone?

If I'm doing multiple parts , I find it easier to mill some soft jaws . Put a dowel in the fixed jaw for positioning and they're easy to keep clean .

Soft jaws for me. Made the first few with parallels, then installed them in the vises and cut them with a step. No worries about having parallels
fall out now.
This thread has video of them both being made and in use. https://www.hobby-machinist.com/threads/new-to-me-mori-seiki-mv-40.80467/#post-695246

I've been having fun and built about 6 dozen, so I've listed some on ebay. 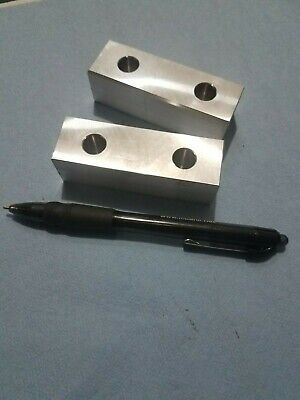 Find many great new & used options and get the best deals for 3 inch milling vise soft jaws from 1 inch aluminum millable to hold odd shape at the best online prices at eBay! Free shipping for many products!
www.ebay.com 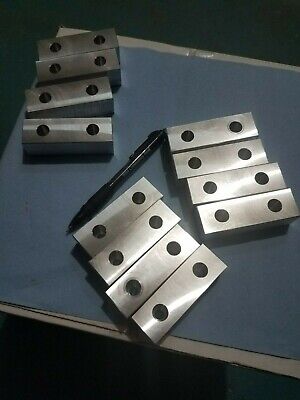 Find many great new & used options and get the best deals for (12 qty) 3 inch milling vise soft jaws from 1 inch aluminum for 3" mill vises at the best online prices at eBay! Free shipping for many products!
www.ebay.com

Not really a hobby machine, but it did cost me less than my Bridgeport.

I tend to always use the same size parallel, so I invested in hard step jaws for both vises. Already had their Vee-Jaws, so it made sense (for the quick change feature).

I paid good money to not have to deal with this issue, haha. Bonus, they included a free set of bump stops due to a shipping issue on my previous order.

Nice undercut in the corner and everything. Lower height as well, but still slightly above the jaw itself.

If I ever need a different size, think I'll just mill out a set of soft jaws to slip over the quick change style mounting screw. 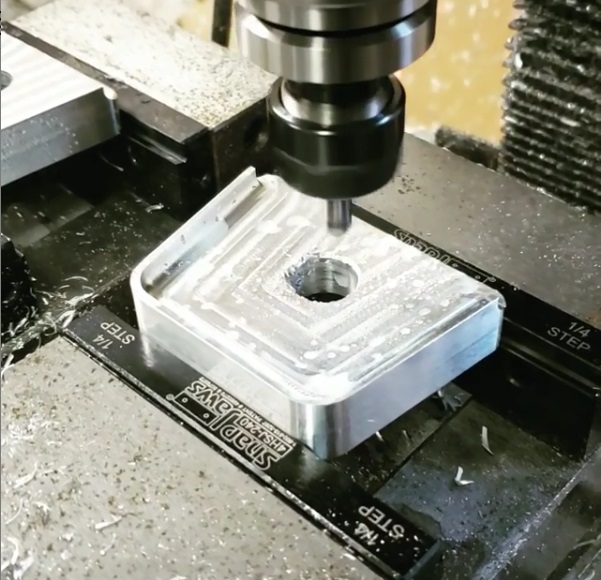 bakrch said:
Nice undercut in the corner and everything. Lower height as well, but still slightly above the jaw itself.
Click to expand...

Those are ssweeeet!!!
You must log in or register to reply here.
Share:
Facebook Twitter Reddit Pinterest Tumblr WhatsApp Email Link
It can take up to an hour for ads to appear on the page. See our code implementation guide for more details. If you already have Auto ad code on your pages there's no need to replace it with this code
Top