Should I buy this lathe for the Atlas Craftsman QCGB?

I found a lathe for sale "in good working condition" nearby that has a QCGB. Seller wants $1,350. Says there is "lots of tooling, too much to list", but no pictures to prove it. Machine looks dirty, but it could be fine. I thought I might buy it, put the QCGB on my lathe, then sell this donor lathe after cleaning it and making it all look pretty and work. The price seems way high; I've bought two other lathes for about $400 that were only a little worse than this one, but they didn't have a QCGB. I've also mostly parted out one of them and made all my money back and then some. I enjoyed the process of taking it apart, cleaning it and getting it running. Of course, there was nothing major wrong so it was easy.

What would I look for to see if this is a decent QCGB? It looks to be the same vintage as mine, so I'm sure the QCGB would fit. I know QCGB's are not cheap, but a quick Ebay search just turned up parts. How much are these? Thoughts? 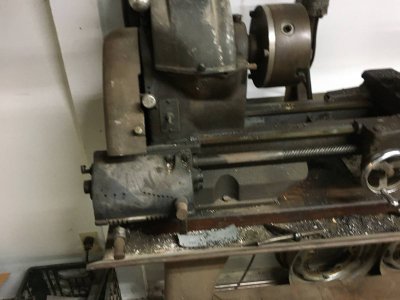 As someone who modified a QCGB to their lathe, don't be so sure it'll be a bolt on job! I did it to my 10" atlas and it required turning down the lead screw and machining the gearbox quite a bit. The distances from the face of the machine where the gearbox mounts, and the position of the leadscrew could very well be different. In the case of the Logans, an entirely different apron might be necessary as well.

Being able to switch the lead screw from one to the other isn't necessarily possible either, and likely not in a way that both would be swapped. For $1400, you likely won't be able to sell that lathe for anything near enough to be worth-while (unless there is a TON of really good tooling!).

You'd likely be better off just buying the gearbox, modifying the leadscrew you have, and be done with it.

EDIT: I JUST realized that ebay add is the housing only?! You might end up getting a project here to modify a bunch of inexpensive gears and making some shafts In my case, I paid $350 shipped for the gearbox for my logan.

It doesn't look like, from the parts list I have, that the lead screw is any different, other than length. So I could use my existing lead screw. This lathe is a Craftsman and so is mine. It looks like it's "plug and play". Unless it's all buggered up!

I bought a "donor" lathe when I bought my "keeper" lathe for some of the safety covers and a few other parts. I've sold almost all the donor parts for about twice what I paid. I sold them really cheap in sub-assemblies, rather than at outrageous prices for a single part. But, I did get it pretty cheap. This lathe is on the pricey side, I think. I probably won't recoup all of my costs unless I can get it for cheaper.
E

So in the case of the logans, despite the lathes being otherwise identical looking, there is some pretty significant differences: http://lathe.com/ll-group-archive/adapting_a_qc_gearbox.html

Basically, the location of the lead screw is in a different place as well. I'm not sure if the Craftsman you have has the same problem. In my case it was a little bit of very careful mill time to take ~3/8" from the mounting face, plus modifying the lead screw to get it to work. In my case, I was happy with the outcome.

If you're going to part out the donor, you perhaps will do better than trying to sell a converted-to-not-having-a-leadscrew version, but at $1500, it seems like making your money back would be difficult.