I have a few of these timers that I would like to put to use. For the best of me I can not find any info on the net about them. Could someone give me a drawing like the one below my two images on how to wire this unit up. What I need is something like what I have labeled as my drawing. I just made that up so you could see what I need. Solid State Timer SSAC Part # EISS4D20 120VAC 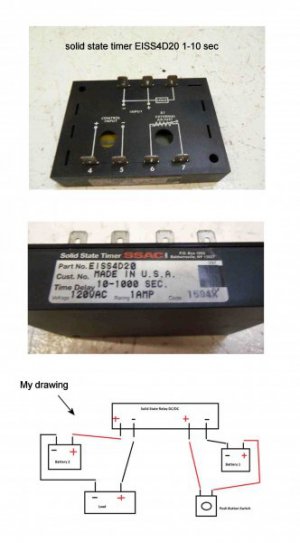 Can you provide more details as to what you are trying to build?
It looks as though the unit is actually intended to operate on 120v ac despite the plus and minus markings
I don't know what the control input does, possibly an inhibit, might require a low voltage input like 5-12 volts dc
I haven't found any info online either- the company most likely discontinued the model
mark
ps can you open the unit up?
Last edited: Feb 2, 2019
Looks like the unit can only give 1 amp output, so you would need to add an external relay to control larger currents.
Pins 6 and 7 would connect to a variable resistor of about 100k ohms
The control input either starts or stops the timer- don't know which. You might could use a 9v battery to test it.
Here's a picture of a similar timer I found on Galco website: 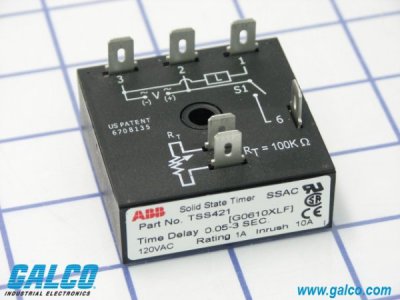 Yes I agree with all above... I just would like to use it for a delay relay. The numbers 4 and 5 got me confused.
The machine I took them out of had # 4 as a green wire that went who's know where. and #5 had two white wires.
one white went to pin #1 and the other to a 2.5uf cap and the other side of the cap to a 300 ohm resister. 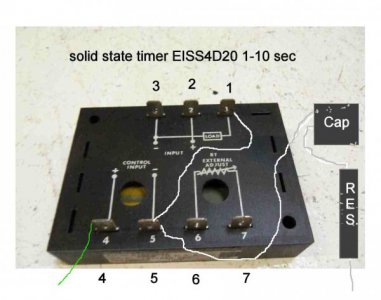 I spent around an hour trying different things to get this to work. I even wired it up like this timer. No go... 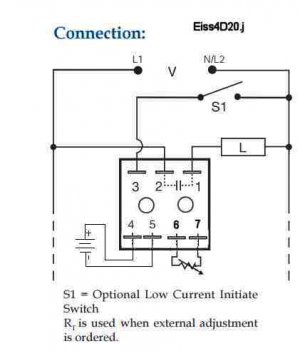 I opened the plastic box... It's filled with epoxy so I can't get anything this way...
I'm sure that all that i have can't be bad. Pulled multiple units off used machines.
I hate to throw them all away but I sure can't get them to do anything.
It's possible that the control input is designed to work with 120 vac, despite the + and - markings. You might try that.
Given the lack of any available info on them there may not be much else you can do.
They may have been built for some specific purpose for a single customer- what did they come off of?
M
Last edited: Feb 4, 2019
I did try the 120v to the control input... No smoke .... No nothing...

Thanks....
OK, well good that you tried to recycle them, the amount of electronics that goes to scrap is truly shameful
M

markba633csi said:
Looks like the unit can only give 1 amp output, so you would need to add an external relay to control larger currents.
Pins 6 and 7 would connect to a variable resistor of about 100k ohms
The control input either starts or stops the timer- don't know which. You might could use a 9v battery to test it.
Here's a picture of a similar timer I found on Galco website:
View attachment 286687
Click to expand...

As you correctly ask Mark, be nice to know exactly what the "piece of string is required to do".
Correct answers come from Correct questions or Specifications.

Like the answer to the question of life, which I think is currently, is 42. Is that helpfull at all?????

edit:- The timer you have is a ISO-TIMER (SINGLE SHOT) according to ABB website.

Now, what is it that you want to achieve?
Last edited: Feb 4, 2019
Winter time is my school time in my shop. I go to the junkyards and get industrial machines to
play with at no cost. My learning tools. Everything from zero-maxs's, uhing drives, gearboxes,
electric motors and you name it. I never know what I might find. I never know what I might build
from what I find. Last two weeks I have been working with encoders and Multi ranger counter/timers.
I especially like finding something I've never seen before. First thing I do is google it to find what
I found. Then it's off to the shop to see if I can make it work. I got many boxes of electronics and
gadgets that I think must be one of a kind. Playing with electricity has not killed me yet...
Things I've built with my junk...
bipolar motors.
jacob's ladders
tesla coils
unipolar motors
Phase converters.
CNC mill
and much more.
Great stuff. Thing is, I don't mind helping for a purpose with a reasonable result.
I also, have a pile of stuff, that require stuff to be done.
Have fun with, your stuff.
That's a tough nut to crack. It is surprising that a data sheet hasn't turned up. Offhand, I would think that terminals 4 & 5 were a d.c. trigger voltage. 24 volts is a fairly common industrial voltage. The problem is the delay. Without knowing what the delay vs. resistance curve is, you could be waiting for as long as 16 minutes for a response.

The labeling is confusing. The + and - on terminals 2 & 3 in particular. The devices is USA made and I would expect the more common L1, L2 or N, L1. Given that the manufacturer used + and - for a.c. connections on other devices (post # 3), it may mean that the trigger voltage was a.c. as well.

I would guess that this is mid to late '90's technology, preceding microprocessor technology that became common in industrial controllers. There appears to be a fair number of the devices available from vendors specializing in obsolete electronics. The EISS4D22 is a similar device but searching for a data sheet was unsuccessful as well.
Yep, agreed. Could even be older than that- 80s? R/C, comparator/555, triac output
Too bad it's potted
M
Hey... Thanks or all your help... I had fun playing anyway. I don't expect everything that I get
from the junk yard to work. Like I say this is more of a learning tool for me. I like the old stuff...
I love old stuff; I like new stuff LOL
You must log in or register to reply here.
Share:
Facebook Twitter Reddit Pinterest Tumblr WhatsApp Email Link
It can take up to an hour for ads to appear on the page. See our code implementation guide for more details. If you already have Auto ad code on your pages there's no need to replace it with this code
Top
AdBlock Detected