Tactical Error - There ARE times when lube is a bad thing...

I acquired an ancient Seneca Falls Star 30 Lathe. There's a separate thread on that story.

One of the first problems that came up was that the compound angle adjust wouldn't lock. After asking around and fussing with it some, I discovered that the original locking set screw had broken in the hole. I extracted the remnants, chased the threads with a bottoming tap, dropped a new screw in and got it to lock.

I came into some windfall money and used it to buy a new Shars AXA QCTP. After machining the nut to fit the slot on my compound, I installed it and as I was tightening the nut on the QCTP, the compound moved. Tightened the set screw until I was worried about ripping the threads out of the casting and it STILL moved. What the...???

Got to looking at it a little more closely and figured out that what I thought was the post it rotates on was actually MORE of the original set screw! Fiddled around trying to fish it out of there with a pick and did get it to turn a little but couldn't fish it out.

So, I reasoned that the rotating part HAD to come off so I started a little tapping and gentle persuasion and got it to move a little and thus encouraged, used some wedges to pop it off the post. Oh, look! The set screw doesn't bear on the post, it bears on a wedge and the post is actually a dovetail...Neat! Ground down a nail for a punch, punched the retaining pin out of the wedge, removed the wedge and was able to remove the remnants of the original set screw and chase the full depths of the threads.

And here is where the tactical error comes in. While reassembling, I used a Q-tip and applied some way oil to ALL the surfaces including the face of the wedge and the dovetail on the post.

Yeah...except that when using a boring bar on an interrupted cut (keyway...) there's enough vibration that the compound won't hold zero no matter how much I tighten the set screw. In retrospect, I'm guessing it's the lube on the dovetail. So, next shop day, it's take it all apart again and clean the lube off the wedge and dovetail.

I ran into the same problem. Check the surface area of the bottom of the compound, and the cross slide. I found that the one I was working on had a slight bell on both surfaces. The set screw not only draws on the post, but also draws the compound down against the cross slide surface. I blued the compound bottom and checked against the cross slide to find it only contacted near the post. It took about an hour of scraping to get a good contact pattern toward the outside periphery. Now it locks up tighter than Dick's hatband.
@derf - Thanks for that. I'll check it when I disassemble it. Again.
I agree with @derf. Oil on a machined surface usually doesn't interfere with locking something down. If it moves, the first thing I think about is that the two mating surfaces are not making full contact. Surface grinding or scraping is usually involved in the fix.
"Tactical Error - There ARE times when lube is a bad thing..."

Like when you send an assembly fixture for Hard Drives into the Class 100 clean room _without_ de-greasing it first...?
Cleaned the oil off the mating surfaces with some acetone, seems to lock up pretty good now. Won't know for sure until I try it. Waiting on some Dykem to check contact surfaces.

Also discovered the source of all the backlash in the cross feed. I thought the handle was threaded onto the shaft. Nope...Those threads were for the nut that holds it onto the shaft. The key was also missing and the keyway was boogered up from some hamfisted dishpit forcing the setscrew into the keyway.

Et Voila! Backlash measured in thousandths instead of 8ths...
I got some Dykem to check the fit and contact between the compound and the crossfeed.

I painted the surface on the compound, let it dry for a minute and then set the compound back on the crossfeed and worked it back and forth a few degrees.

This is what I'm seeing: 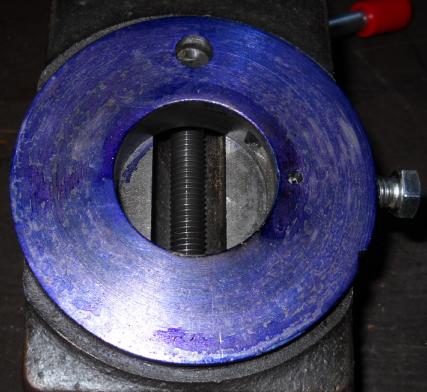 The surface on the bottom of the compound. 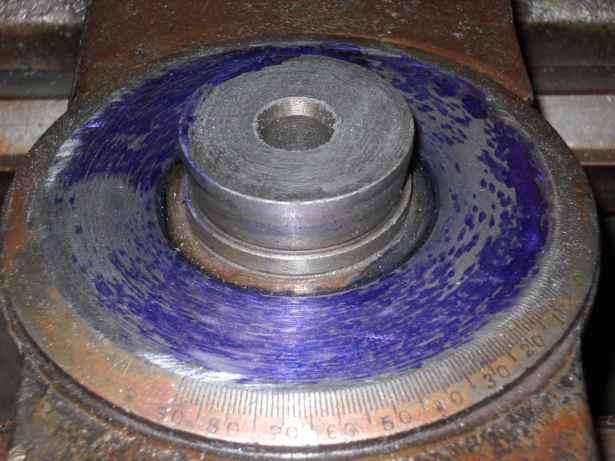 The surface on the top of the saddle.

1. Did I use the correct technique?

2. The areas around 8 o'clock and 2 o'clock on the crossfeed where very little of the dye transferred are low in relation to the rest of the surface, yes?

3. I have absolutely NO idea how to deal with scraping the surfaces, I can't afford to send it out even if I knew where to send it. So I'm toying with the idea of using a little valve-grinding compound and essentially lapping it in. Feasible? Horrible idea?
You're on the right track. Essentially you want the contact area towards the outside, that's where the most grip area is. Basically the outer 1/2" or so. Lapping that whole area might prove futile. If you can't scrape it, you could mill off about .005"inside the outer circle, then lap it. Depending on what other machines you have to work with, you could either turn some off the compound base to leave a raised ring towards the outside, or you could do the same by milling some off the cross slide using a rotary table.
I scraped mine because it was faster for me to do it than making a set up on the mill......besides that , I just made a new scraper.
It looks like the Dykem is too thick to tell you anything. Put on a really thin, transparent coat and try again. Be very careful how you rub them so you are not tilting anything and changing the contact areas.

PHPaul said:
I got some Dykem to check the fit and contact between the compound and the crossfeed.

Are you using Lay-out Dykem? You need to use Dykem Prussian blue, it's a thin paste that you apply to your surfaces in question, it doesn,t dry out.
@eugene13 - Yeah, it's layout. Didn't realize there was more than one kind. I'll get some Prussian Blue.

@Bob Korves - Thanks, I'll try that with the Prussian Blue.

@derf - Thanks for the input. I don't have any other machines that can handle either approach you mentioned. I'll re-check as mentioned above and see what can be done.
Do you have a Dremel?

derf said:
Do you have a Dremel?
Click to expand...

An ancient one. Also have die grinders and 3M Roloc Scotchbrite-type abrasive discs in various grades.
Then you have tools that will get the job done. Scribe a circle on the bottom of the compound, the outside 1/2". Use the die grinder to relieve everything inside the circle. It wont take much.

You'd be better off with with a piece of flat stock and wrap sandpaper around it. You want to take off minimal material and be able the control it. It appears the perimeter has been filed in some places. Which look like low spots in the pic.
You must log in or register to reply here.
Share:
Facebook Twitter Reddit Pinterest Tumblr WhatsApp Email Link
It can take up to an hour for ads to appear on the page. See our code implementation guide for more details. If you already have Auto ad code on your pages there's no need to replace it with this code
Top