Register Today
12 inch pulley arrived this morning. Made a bushing and it's a done deal. Need to work up a mounting base from 2x2 Aluminum Angle and we are close. 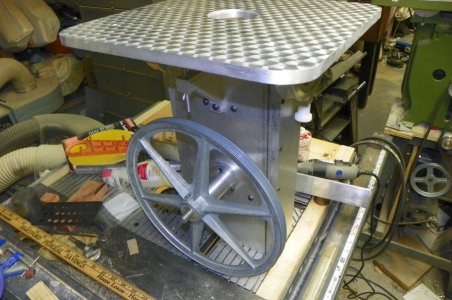 Register Today
Two mounts are roughed out. They are made from 2" Aluminum Angle .250 thick. 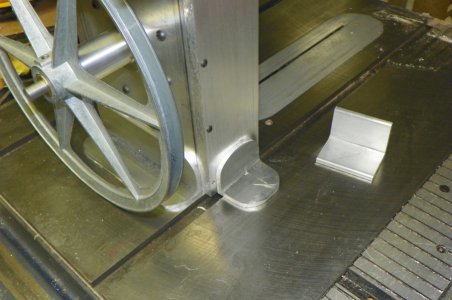 well here is what I got. Bill you might want to close your eyes. I just can't seem to keep any of it real consistent. I even managed to burn the AL. The first photos are wood dowel on AL. the second two are wood dowel on SS and then I just played with a Nylon abrasive brush. (not that Pretty.) any how I said I wouldreport back so here it is. 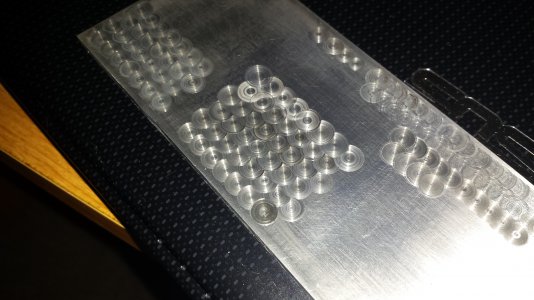 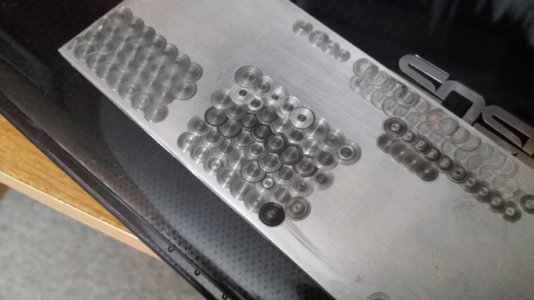 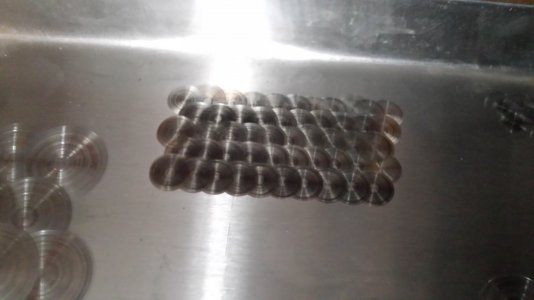 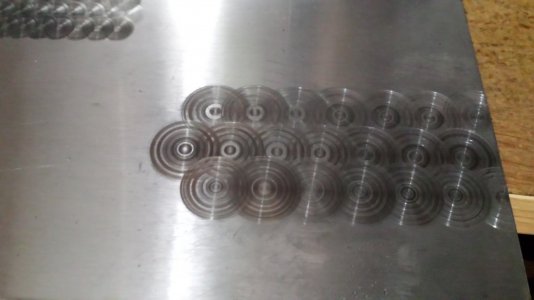 Your die filer is coming along nice.
B

I get a Hobby Machinist Error when I try to open your attachments. I really want to see them.

That is not bad for you initial trials. All you need to achieve what I do is time and practice. You did well.

Thanks for the Kind words. Although I know its bad. This give me more respect for the art you do. It seems like one of them things where you just have to find what the things your doing wrong are and correct them. All I have to do is figure it out. The SS seems easier up to the very fine line between nice finish and Bluing.
Thanks again for all your tips and kind words
Mark
B

Register Today
And then it got feet. The mounts are done. There are many was to mount this "Die-Filer" so no prints will be done for these unless someone asks. Mine are just 2x2 aluminum angle. Pretty straight forward. 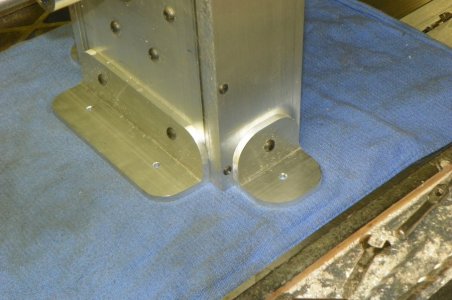 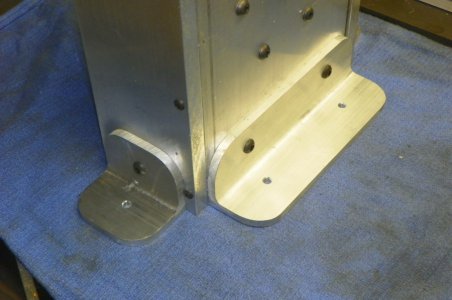 Looks good , Bill. You tried it out yet?
B

Register Today
I have some small things to tie together on it before power can be added Mark. By the end of next week it will be a running machine. I expect no surprises though. Too many things are keeping me away from spending enough time to complete the task.

Bill, you sure do nice work!

coming along real nice bill. How is your wife doing? Good I hope.
Mark
B

Register Today
Sophie is doing well, thank you Mark. She is getting stronger everyday. She will be home soon where she belongs.

Glad to hear this Bill!

I am sure it will be a great relief when she finally comes home.
B

With Bob passing my head is listing a little. I went to the shop to seek refuge. These are the knobs that lock the table tilt.

Dang it, been missing the updates, I dislike very much having to visit each email update in order to get additional updates.
If you miss or over look one you get no more.

Hi Bill,
You stalled for various reasons on your die filer?

Been hoping to see you working it.

Bill Gruby said:
That's a tall question to answer Mark. In the beginning it is to my understanding that Engine Turning was the Craftsmens signature. It served to tell who did the work, especially in watchmaking. Now it is a little known art used for decoration. At one time the swirls were thought to help in lubrication. This is a myth because when done correctly the surface is only6 burnished. Today it is cheated with abrasives. This began when they started using lapping compound to speed the process. Look up "Rose Engines, you will be pleasantly surprised.

When I was building specialized glass tube forming machinery we used a 3/4 dia dowel with a 1 inch square "pad" of scotchbrite red hot melt glued on the end. My machinist programed a grid pattern in our prototrack cnc mill & let her do all of the work. Cheating at its best! Looks good after black anodizing.

Hi Bill did you finish this project? Your work on this has the signature of a master of his trade.

Nice work,Bill. I am looking forward to seeing the finished machine. I have 3 die filers. The one I use the most is the Butterfly,as it is the easiest to set up. I have a beautiful "Duplex Die Filer",which is much more complicated. It can file DOWN into an opening,as in a box with no top. It is a beautiful piece of quality work! But takes much longer to set up. My third is a very old one that I converted to a jig saw.

I put a variable speed motor on the Butterfly,as all these die filers run WAYYYY too fast,which REALLY hurts the files. The motor is only 1/2 H.P.,which is plenty strong enough. You can buy a little 1/2 H.P. motor with control from Penn State that would run a die filer well. It was intended for use in a mini lathe(The Penn State one). Quite cheap.

Bill's die filer looks just as good, if not better, in person. I was at his place a couple weeks ago.

Bill Gruby said:
I just had a random thought -- what if we added a removable overarm and plunger style blade holder?? Maybe I should stop thinking.

I'm just trying to learn what this filer is/does...

But as usual. You're teaching me a lot Mr. Bill!

Another great project Bill. beautifully done as usual. I'm a little intrigued by the red markout dye, I've only ever seen and used blue.

Back in the early 60's when I was an apprentice toolmaker, we had a couple of die filers., one quite small table only about 6"dia. The larger machine was a square table about 12-14" across. Everything was cast iron and steel, with bronze bushes.The tables were cut with grooves about 1/8th inch deep and about 1/2" wide both ways the lands were about1/2" wide, the idea was that filings would collect in the grooves and not get dragged across the table. The larger machine also had a small blower with a pipe that could be directed into the work to blow the filings away.

Both machines were enclosed and had a connecting rod on a crank pin for the drive, these machines were old but fairly quiet. Also just below the hole in the table a conical hat was fitted where the lower end of the file was attached, this deflected all filings out to a collecting tray that was tilted to one side and the filings all fed into a container which had to be emptied every day, thus keeping the filings out of the works. The smaller machine was a single speed, but the larger one was 3 speed affected by a simple pulley change at the back of the machine. These machines were in almost constant use.
B

Register Today
Bob, back in my apprentice days we had a boss that was a bit weak with the sight of blood, any amount. We all used the red dykem so most blood did not show.

Fair enough, good solution, The red dye appeares to not be available here in downunder or if it is, I can't find a supplier. All the obvious suppliers only have the blue, I always thought it was the only one, until I saw the red on here. I guess it doesn't matter which one you use. It just was a question that needed an answer.
B

Register Today
See if they can order it for you. It's called "Steel Red".

I've never used real marking out fluid only red and blue wide tip permanent marker pens.
Unfortunately cutting fluids etc dissolve the inks.
Is the dykem impervious to this?
B

Register Today
Yes Charles, I've never had a problem with them.