Please click on this notice to be taken to the Site Support Forum so you can learn more about what happened, what is being done and post a support request so we can help you get your issue resolved.

I have been wanting to get some collet blocks for doing flats for squares and for a hex, but every thing seems to be for 5C collets. Most of my work is rather small for repairing old mechanical clocks.

Background: My main lathe is an Atlas 618 with a MT2 spindle and MT1 tailstock. I also have a full set of Unimat DB200 accessories that I made an MT2 to 12mm x 1mm thread to take the Unimat chucks. My rotary table also accepts MT2 taper. So that is pretty much my set up. My "mill" is a tricked out JET 13R benchtop drill press.

So we decided to see if we can make a collet block to accept the MT2 taper. Rather than make two, we decided to make one with flats 30 deg apart to accommodate the common one, two, four square and of course the hex.

My lathe is 70 years old and I am the second owner. It has been gently used but does show signs of wear in some areas of the bed, so first was to check the tailstock alignment in the working area for a later set up. 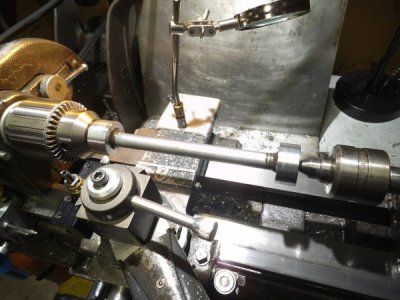 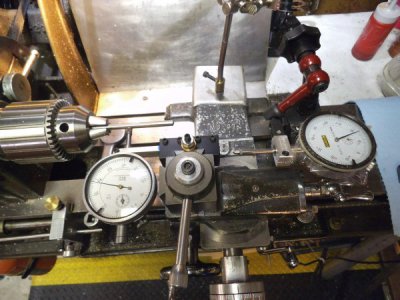 For a double check we had an MT2 - JT33 arbour with centres on each end. 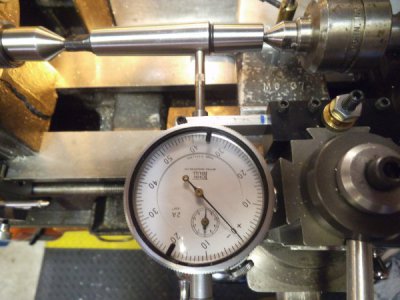 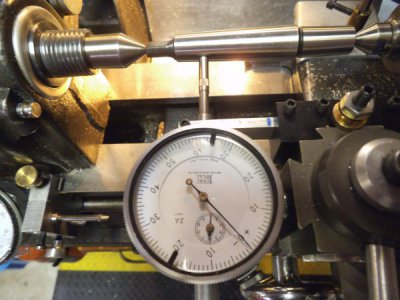 Now to mount the work piece and centre close as possible. 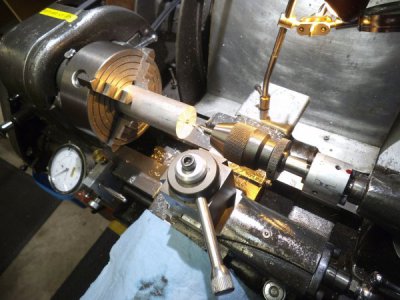 After drilling an boring out the minor diameter now time for the taper boring. Although the boring bar is very long we started with a shorter one and increased as we got deeper. Lots of spring back so quite a few spring passes occasionally. Oh and slow going with the compound. 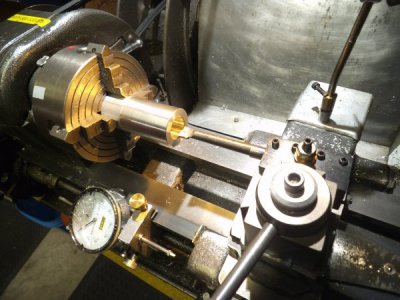 Once the MT2 taper is finished, we must finish the OD concentric with the internal taper. The MT2-JT33 arbour is used as a mandrel to drive the work piece so it was driven on hard. The arbour was then turned between centres and driven with the lathe dog. This is why the tail stock was verified previously. 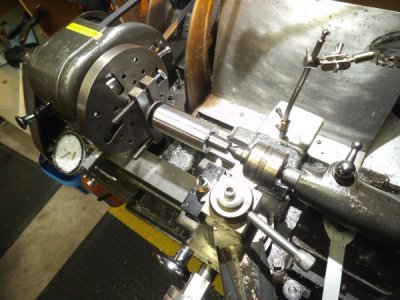 Time for a break will come back soon.

Continued:
Now this is going to seem a bit shaky to some, but I have to figure out how to transfer this for milling in the rotary table. The set up is to use my MT2-ER-11 collet as the driving mandrel for the work piece. A Ø 7mm rod is held in the ER-11 collet and then chucked in the Unimat 4 jaw independent chuck for alignment. The alignment is done in the lathe before transferring to the mill. 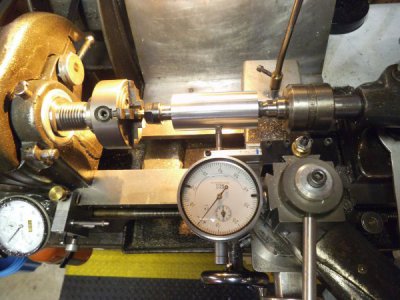 now transfer to the mill and use two dial indicators to align the work piece in the rotary table between the tailstock. 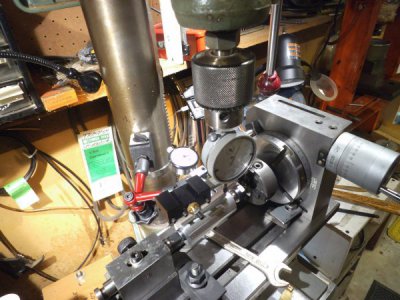 Again the work piece is a friction fit on the mandrel so using conventional milling only and in a direction to drive the work piece onto the taper and slow with about 0.05" step over for each pass, and no cutting on the back haul with a Ø6mm end mill. Slow going and advancing 30 deg with each flat. When it was all done changed to a Ø12mm end mill to act as sort of a face mill to make a finish pass and clean up the individual passes. 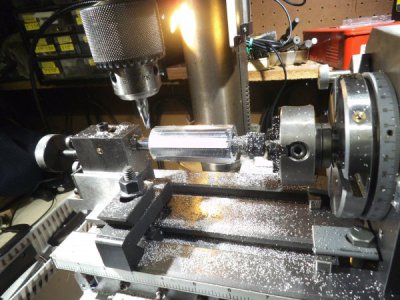 At this stage I wanted to put some index marks on the ends of the various flats with numeric stamping dies i.e a "2" on two flats 180 deg apart, a "3" for 120 deg etc. However after a few attempts without a calibrated hammer and with an unsteady hand,, that is a mess.. I faced them back off and decided instead to use the electronic component color code. red = 2, orange =3, yellow =4, blue =6, by drilling small holes and filling with paint.
So we start with drilling the index holes 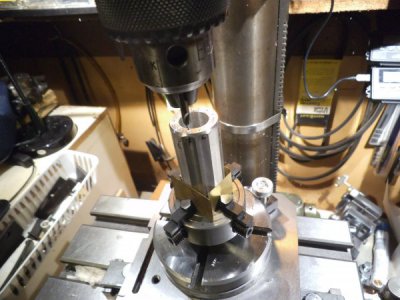 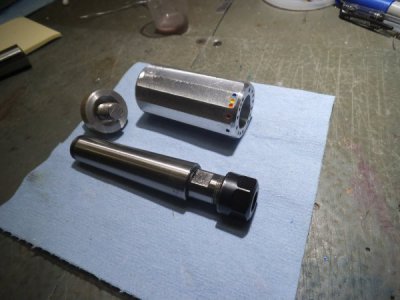 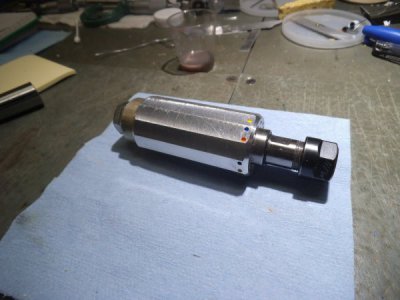 Ok now lets try out some options.
milling the hex in the ER-11 collet 4 flat with the Unimat chuck/arbour and of course using just plain MT2 collet 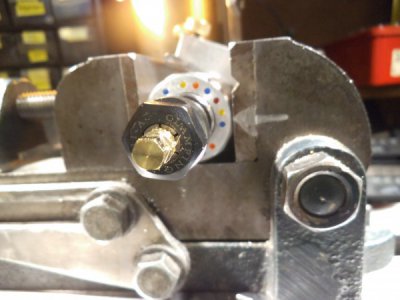 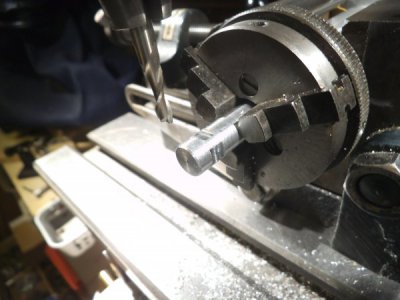 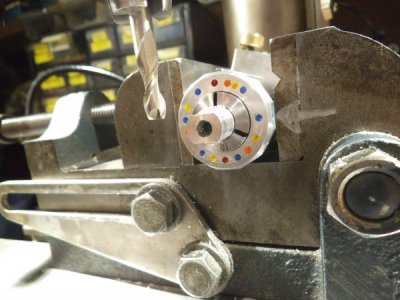 And if you want to make one of those drill bit extensions for you hand drill they often use a triangular feature on the end, so why not. 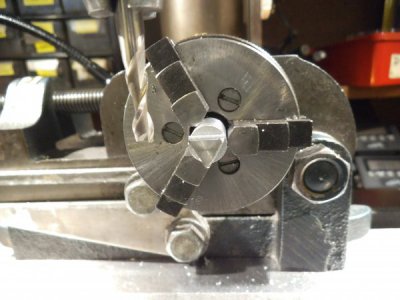 So there you go. I have used it a few times now and like the flexibility to handle all sorts of chucks and to do hex and regular flats with one tool.

You must log in or register to reply here.
Share:
Facebook Twitter Reddit Pinterest Tumblr WhatsApp Email Link
It can take up to an hour for ads to appear on the page. See our code implementation guide for more details. If you already have Auto ad code on your pages there's no need to replace it with this code
Top