Vice Bank: too good to be true.

You'll know the old adage that if something sounds too good to be true, then it probably is? Well, it's happened to me again. We optimists have a hard time of it.

Around here, decent second-hand machine vices seem to sell for around £150 to £200. I saw a bank of three on eBay, starting price £50, no bidders, less than an hour's drive from home. I won the auction (for £50: I was the only bidder) and I went to collect my prizes today.

Now, being a bit daft and naive, I simply assumed that these were three vices bolted to a frame and they'd give me a lifetime supply of vices for my Bridgeport. In fact, the three vices share one common, solid base, about 1" thick. The thing must have cost a fortune when it was new.

Three of us couldn't lift it and we had to lower it into the boot of my car with a fork-lift and straps. I'd guess that it weighs around 200 lbs.

I am seriously worried that it might damage my Bridgeport. Any thoughts?

I don't know what I would do with a three-vise. Maybe clean it up and offer to trade for three individual vises.

A band saw should make that into 3 individual Vices. Then a bit of machining for some hold downs. Should be fun to do.

Cut one vise off or even both. Make some custom upside down "L" shaped hold downs to clamp the vise base ledges to the table. You could even cut off the existing mounting ears/slots so the vises were equal in width and parallel on both sides. That would offer the opportunity for a vise to be slid forwards and backwards on the table to any point you wish, not being restrained by the ears and table slots having to match up. It would also allow tramming, and also mounting the vise on at significant angles. You would then have three interchangeable vises with lots of ways to use them, separately or combined. A straight bar in the jaws of multiple vises lines them back up again easily, nothing lost.

Bridgeport table rated for 750lbs by my book.
Can you simply cut them into individual vices?
Hard to tell by the picture if there would be enough stock to notch for a standard vise type bolt down once cut apart, but toe clamps could
be used if the cut off is short on the sides where the vises are next to each other.

Hacksaw surgery? can you seperate them and add extra clamping or hold down points? 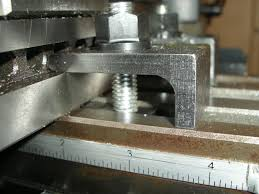 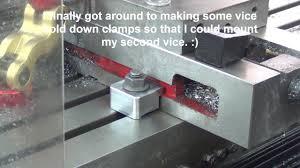 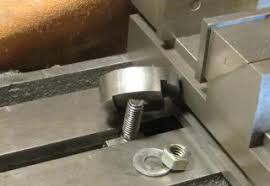 I did entertain the idea of cutting them but the base is one inch thick. It would be a heck of a job for my little bandsaw. It would also feel like vandalism. I'm pretty sure that the Vertex Machinery Company put a bit of time and effort into making the bank of three. It isn't as if I need a new vice: I have a perfectly good one on my mill.

If my Bridgeport will take the weight, and I'm not going to cause premature wear, I might try popping it on to see how it goes. Fortunately I have an engine crane to do the lifting.

If all else fails I can buy a few blades for the bandsaw.

Looks like it could be a nice set-up for someone with a CNC mill that wants to make small parts in multiples of three.

So the vise bodies cannot be separated from the common shared base at all short of cutting?
N

That is exactly the problem.

I have now hoisted the beast out of the boot of the Jag (if my wife finds out how I brought it home, she will not be happy) and set it on a work bench for cleaning. With a little wire wool and WD40 it's looking half decent now.

The base isn't actually solid. I think it's cast iron and it has a sort-of web-like pattern, so cutting might not be as much of a nightmare as I'd first supposed. I am, however, still reluctant to chop it up because I don't need to ( I have a decent machine vice already) and it seems a shame to destroy it.

The three vices have, I think, been used to hold a part with a specific shape. The rear, fixed, jaws all look to be original and are aligned. Each of the three moveable jaws has been modified. I guess that the vice bank was set up for making something that had a particular shape and, when the job was done, the company simply got rid it. Either that, or there were three milling processes, each requiring differently shaped jaws.

I think that one could buy, or make, more conventional square jaws without much difficulty, so that all three of the vices still have useful potential. I imagine that, if one wanted to work on a long part, the set-up could give superb rigidity.

If anyone is interested in the detail of the jaws, I'll go out to the workshop and take some more pictures.

It's a devil of a heavy lump. At one point I had it on a sack truck, with a chain around it to stop it from falling forwards. I laid the sack truck down and it nipped the chain against the truck: I couldn't even lift the end by an inch to get the chain free.... If nothing else, I've bought a cheap anvil!

You can gain World-wide fame as the first to successfully separate conjoined triplets!
V

If the wife complains about hauling the vice in the Jag, remind her that a lot of bodies that weigh that much have probably been moved that way and nobody has heard of permanent damage being done to any cars.

Knowing that 6" vises weigh +/- 90 pounds and even a webbed iron plate that's m-o-l 12" x 22" is minimum 60 lbs; I have to ask. Picture isn't clear; is not the iron a subplate, with vises capscrewed & likely doweled to it?
No saw required, just an engine hoist to roll it over, have a go at the fasteners.
M

That vise bank might have some vital aircraft part.
Might even have been for hurricanes or spitfires.
You must log in or register to reply here.
Share:
Facebook Twitter Reddit Pinterest Tumblr WhatsApp Email Link
It can take up to an hour for ads to appear on the page. See our code implementation guide for more details. If you already have Auto ad code on your pages there's no need to replace it with this code
Top
AdBlock Detected