Which lathe to buy.

I’m looking to purchase a used lathe for my garage. I’m in a rural area and will have to drive a ways to look at one. One is a Logan 820 for $800 that I’m hoping to get down to $500. The other is an Atlas 101.07403 with a craftsman qcgb I’m thinking I could get itfor $400. All condition issues aside I don’t know if either has any. Which would be the the best lathe to get. One more thing the Atlas had the ways scraped 20 years ago.

I’d go with the Logan.

I have a Seneca Falls Star without the qcgb. Would like something newer but wouldn’t trade down to have the gearbox. I mostly feed manually and rarely thread anything. I think you’ll find that the Logan is stouter and better built from the start.

Plus, how would you know the person who scraped the ways did it right.

JMHO, hopefully you’ll get responses from someone who’s owned both.

All things being equal, most people would say that the Logan is a better lathe than the Atlas. But, the Atlas has a 12" swing while the
Logan has a 10", which is an advantage. In this case, your primary concern should be the condition of the lathes and
what tooling comes with them. The $100.00 difference in price is irrelevant. Repairs, replacement parts or tooling can eat up
far more than that in a heart beat. Nobody wants to pay more than they have to, but you should be looking for the right lathe,
not the cheapest lathe. Either the Logan or the Atlas is capable of good work if they're in decent condition.

If you have never owned a lathe before, it would be a good idea to slow down a bit and educate yourself about lathes and
how to buy one before you take the plunge. There are a lots posts on the forum that will help you with this, as well as
lots of info on the internet.

It's a tough call, but if all things are equal, like age, wear, and tooling, I would go for the Logan. Like Mathewsx I also have a Seneca Falls machine with change gears. It's a 10" machine like the Logan, and it's served me well for over 20 years. Personally I believe the Logan is a better quality machine, and parts will be easier to source should they ever be needed.

Having a QCGB is nice, but certainly not mandatory. I think you'll find threading is something you won't be doing on a daily basis, so changing gears won't be a major inconvenience. One caveat would be to be sure ALL the change gears are included. If some are missing it could be a real PITA to make or find them.

As a side note I also have a Sheldon 13x56 lathe with a QCGB. Both machines get about an equal amount of use. The advantages of the Sheldon are a larger through hole in the spindle, higher available speeds ( the Seneca Falls machine is only capable of 650 rpm while the Sheldon can turn 2,200 rpm) , and obviously larger chuck sizes can be used. The ability to use larger chucks on the Sheldon machine is a bit of a mute point in that I only have 8" chucks for both machines. In the 20+ years I've had the Seneca Falls machine I can't remember a time when it was too small for the parts I needed to make. Similarly since the largest chuck I have for the Sheldon is an 8" I won't be making any larger parts with it either unless I purchase another chuck. I don't see needing a larger chuck a necessity at this time or any time in the foreseeable future.

projectnut said:
the Seneca Falls machine is only capable of 650 rpm
Click to expand...

I looked up mine and it said max 340rpm. Is it possible that's just what it could do with the motor, not what the bearings are capable of?

Thanks for the info. I’ve been doing some YouTube watching about some guys refurbishing their lathes and have a learned a fair amount about them. I feel confident of being able to do repairs if needed and one will likely need some fixing. I don’t plan on threading but want a stout enough lathe. The Logan caught my eye but it’s a ways away and doesn’t come with anything but a three jaw chuck. I think I’ll wait till something shows up closer to me.

matthewsx said:
I looked up mine and it said max 340rpm. Is it possible that's just what it could do with the motor, not what the bearings are capable of?

I'm fairly sure the speed limitation is due to the bearings. Very few of the Seneca Falls machines came with a motor. Almost all were line shaft driven. Later ones that were intended to be powered by an electric motor had a motor as an option. The buyer could either purchase a motor from the company or supply their own.

My machine was originally line shaft driven. My wife's grandfather ran it (as a line shaft machine) for over 40 years in a prototype shop for a vending machine building company. When he retired they gave it to him as a retirement present. He put it on a wooden bench and added the electric motor. When he passed it went to my wife's father. He used it for several years on the wooden bench. By the time he passed the bench was in shambles and the electric motor was beyond tired.

I inherited it in the late 1990's and decided to build a steel stand and retire the motor that was on it. It was the workhorse of my shop until about 2015. That's when the Sheldon entered the picture. Now they share the work load. The truth be known it's easier to turn small parts on the Seneca Falls machine. There's more room around the headstock, and it requires less reach to get to the spindle. 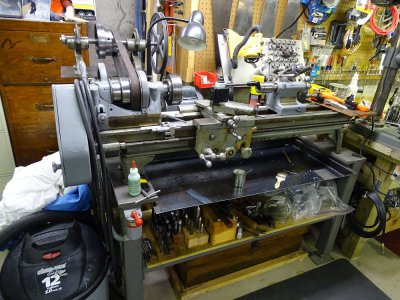 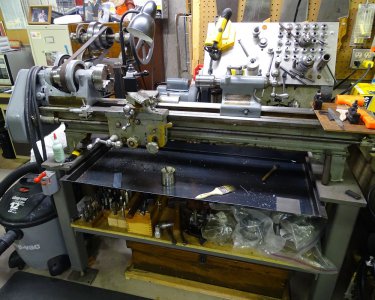 One thing to keep in mind about both the Logan and the Atlas is there is some availability of new parts for both machines.
Logan sells wear parts and some stuff like gears: when I went through mine I was able to get almost everything I needed,
though not inexpensively. I know less about parts availability for the Atlas, but understand that Clausing has some parts
available as well. Because both machines were common, there are often parts available on eBay as well. Other brands of older
machines don't have this kind of support, and will be more difficult to repair as a result.

This is not a suggestion to buy either one of the machines you've mentioned, but is worth considering as you shop for a machine.
One thing about Logans to keep in mind is the 11" machine has a much larger spindle bore than the 10", and is preferable
for that reason. Otherwise, they're similar.

Since you're waiting anyway, see if you can find a lathe with a quick change gear box. I know you don't plan on cutting threads but that is what makes a lathe truly useful. While you may not think cutting threads is in your future, once you have a lathe I guarantee that you will need to cut threads. Just think about it.

RobJ said:
The Logan caught my eye but it’s a ways away and doesn’t come with anything but a three jaw chuck. I think I’ll wait till something shows up closer to me.
Click to expand...

Included tooling is well worth looking for and paying more for. It will almost always be cheaper than buying it all separately. Just a steady rest for the Logan runs nearly $450 new from Logan and generally $300-ish used on ebay.

Once you get to the 11" and larger the spindle bores seem to be pretty steady regardless of age at 1-3/8"-ish and getting larger as the swing increases. If you have any interest in using 5C collets with a collet closer you will usually need a lathe with an 11-12" swing for the larger spindle bore.

I would agree with Aaron W as far as a smaller bore size on the 10" machines. However that doesn't mean you can't use a 5C collet chuck. There are several commercial ones available, or you can make your own. I made a 5C collet chuck for my Seneca Falls machine using a kit from "Metal Lathe" http://www.mlatoolbox.com/index.html

projectnut,
I have a 15" Clausing/Colchester. Are you saying this kit can provide the materials needed for my larger lathe?
I have not been able to find a steady for it.

Yes. If I remember correctly the kit consists of bare castings for a 5C collet chuck, some ball bearings, and a dimensioned print. I believe I supplied the socket head bolts needed to fasten the back plate to the body. One piece has to be turned for a backplate. The one I got several years ago had a boss on the back plate of casting big enough to be bored and threaded for spindles with up to 2 1/4" diameter threads. I don't think it's big enough for an L or D series spindle. You can call Andy Lofquist to get the specific dimensions of the castings. His number is at the top right of the page I linked to in my previous post. I have spoken with him on several occasions, and he is more than ready to help.
You must log in or register to reply here.
Share:
Facebook Twitter Reddit Pinterest Tumblr WhatsApp Email Link
It can take up to an hour for ads to appear on the page. See our code implementation guide for more details. If you already have Auto ad code on your pages there's no need to replace it with this code
Top
AdBlock Detected