Some two years ago I was not happy with my 125mm 4jaw independent chuck performance. After cleaning the chuck (removing all jaws) I noticed that after centering a round bar, the indicator showed 0.0004" (0.01 mm) near the chuck jaws, but when I moved the indicator further away from the chuck to a distance of a few inches, the readings multiplied by a factor between 10 and 50!!!

This showed a very serious misalignment of either the chuck, the jaws or both of them.

Usually, when I needed to machine a long bar I always supported it to the tailstock so I never made any measurements at a distance from the chuck.
After some tests, while I put each of the 4 jaws in different positions and made measurements, I noticed that the readings, at the end of the bar, changed in a more or less random way according to where each jaw was fitted!!!.
There was no way to keep the near-zero indication at the end no matter the (random) jaw position!!!

To find the position with the smallest error I planned a more systematic measurement approach.

First I always bolted the chuck at the same position on the plate as you can see from the marks both at the chuck and the plate (in the middle of the chuck). 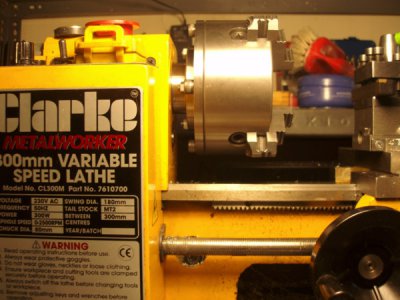 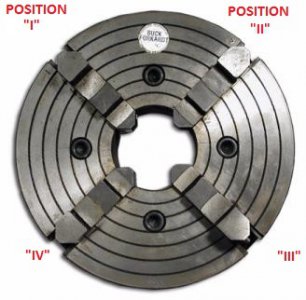 We will use each of the four numbers as the first number. For example number 1 will be the first.
With the rest of the jaws there are 3 combinations for the second number
1-2
1-3
1-4

In total (to use each number as the first): 4 numbers × 3 choices = 12 ways to choose the first two numbers.

All the possible combinations are as follows

So I had to make EACH ONE of the above to cover all possible combinations!!!

In other words, I needed to make 24 changes of the 4 jaws plus 24 indications at each end of the bar and record the data... That TOOK TIME!!!

So I started making all possible combinations of the jaws to the chuck, cenered the bar as close to the chuck as possible and then make measurements of the bar at a few inches (5") distance. 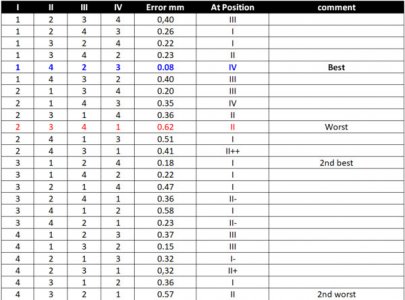 As you can see from the above data The best choice was to use the combination with the smaller error and try to correct it further.

For that reason I indicated a test bar to the 4 jaw chuck, using the smaller error jaw combination and then without removing the bar I removed the chuck and supported by the bar in between centers. 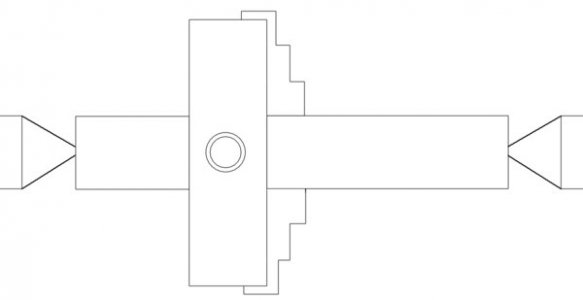 Next I very lightly skimmed the back of the chuck.

After mounting the chuck on the lathe the error was still there but now was 0.002" (0,05 mm) 5" away from chuck, (at the same distance I made the measurements before).

I was so bored from the numerous jaw changes and measurements that I called it DONE.....

Further measurements needed but at least I was happier with it as it was at that time.

To avoid any future mix up of the jaws, I marked each position on the chuck and also marked each jaw using the same mark.

I wished then my next 4 jaw independent chuck to have 4 identical jaws!!!

This chuck kept me happy for another 2 years before it started misbehave again, but this is another story to be published soon, very soon to be precise!

Thank you for reading