I've been fighting an intermittent noise issue with my Igaging DROs since the time I installed them on my benchtop mill. I've done all kinds of things -- shielding braid over the cables, single-point grounding, isolating the scales from the mill (using home-made plastic mounts) etc. The problem would disappear for awhile, then come back, usually when I was trying to sneak up on the final dimensions of a part I'm working on (Murphy strikes again!). I started thinking the problem was in fact an intermittent of some kind, so did some additional experiments.

Long story short, I found that the noise problem disappeared when I connected the aluminum scale to the DRO's internal ground. I had previously ohmed things out and found that the scale was connected to ground. Since the sensor must move along the scale, this meant the connection was through a sliding connection. Aluminum is notorious for building up an oxide layer, so it seemed like a good idea to hardwire the scale to the sensor's ground -- and it worked.

Since my experiment involved attaching an alligator clip to the scale, I "hardened' the connection by drilling a hole through the far end of the scale and installed a spade connector, then hardwired the scale to its DRO ground, making sure to make the wire long enough to accommodate the full range of sensor motion.

If there are some out there who are looking at the Igaging DROs at this point I can't recommend the aluminum scales. The stainless ones should be much better in this regard (assuming the sensor circuit is the same). If you're fighting noise problems with your aluminum Igaging scales and don't want to spend any more money than necessary, you may want to try this to see if it helps. Temporary connections with alligator clips are an easy way to see if it will. You may need to "scrub" the jaws across the aluminum to make connection.

I've read that some capacitive DROs put V+ on the scale, so you definitely want to check that possibility with a DVM before you make this mod!! I ohmed out both battery connections from V+ just to be absolutely certain I wasn't going to short the two CR2032 Li-ion batteries to ground.

I also had an intermittent noise problem caused by the lathe motor being shut down. I installed two capacitors across the power supply leads inside the read heads and haven't had a problem since. This will take you back to some of the threads on the subject.https://www.hobby-machinist.com/threads/igaging-dros-reducing-sensitivity-to-noise.72828/#post-610914
H

I installed the bypass caps awhile back (which _seemed_ to fix the noise issue at the time), but the problem came back. If noise is being coupled into the scale, bypass caps won't necessarily fix that problem. At least, that's my experience so YMMV. There appear to be a number of paths for noise to get in so it becomes necessary to peel the layers of the onion.

On my machine, the Z axis DRO cable is closest to the motor wires and that one has been the most problematic, followed by the X axis. I've always been baffled by that one because the sensor is much further away, and in addition is covered by a copper swarf shield: but it regularly kicks up its heels anyway.

The Y axis, even though the scale still is mounted using the as-supplied metal hardware, has never exhibited the problem. So there also could be some manufacturing variations that add to the confusion. It doesn't help that the clock and data lines are high impedance to keep current consumption to a minimum (to maximize battery life).

I had a problem with the noisy (chopped DC) VFD voltage making my DRO sales go crazy. Recently saw a thread here, in which the poster threaded a bunch of ferrite beads onto the motor leads inside the electrical enclosure (sorry, don't recall who it was, or I'd give credit where credit is due!) I bought a handful of ferrites from eBay: https://www.ebay.com/itm/50-x-7mm-I...e=STRK:MEBIDX:IT&_trksid=p2057872.m2749.l2649
and threaded them onto my motor wires - some around each phase, some around all 3 wires. Looks like the DRO problem has gone away!

I have had a few occurrences of electrical noise effecting other equipment, and it can be very frustrating to determine the fix in particular with not having the diagnostic equipment and have the extensive background/knowledge/experience to determine a solution. Most of the cases I have had have been with tachometer's on lathes, proper shielding/wire helped, noise filters on the input power to the tach, and noise filters on the input/output of the VFD along with shielded cables and proper grounding. Within a specific device there can also be grounding issues, as any form of resistance can defeat the noise cancellation effects.

As far as ferrite donuts on the VFD output (as well as input filters), there are different types of ferrite materials (and filters) that attenuate the EMI/RFI for the type and frequency that is causing a problem. So if using a ferrite toroid/filter you need to be mindful of the frequency properties and noise attenuation characteristics. Also for ferrite toroids the number of turns and/or ferrite core material use can have a dramatic difference in both the frequency and degree of attenuation. What I have seen recommended is a ferrite material that attenuates lower end of the frequency range so something like Fair-Rite Ferrite 75 toroids/clamps will start attenuating 200 kHz - 30 MHz range. Only the motor wires go through the toroid not the ground, something like 2-3 turns in the same direction evenly spaced apart around the ring is ideal. If the wire is too stiff then the use of 2-4 toroids spaced apart from each other. I also have used DC chokes on the VFD buss as well as input noise filters on the power going to the VFD. This along with shielded motor cables dramatically decreases RFI which can cause interference with radios, TV's and such. I am just a hack at all this, wish I had talen more EE classes when I was in college, but then that was a long time ago and tube equipment was the status quo. 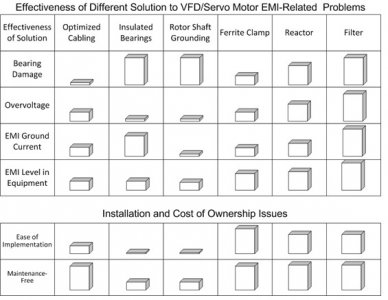 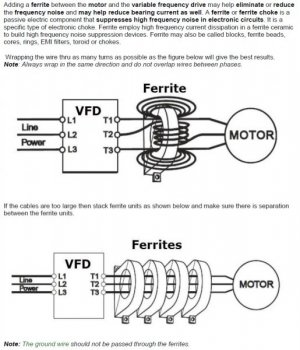 A number of times with sliding or rotating systems I’ve encountered weird intermittent failures, apparently not correlated with anything. Ultimately static buildup was the root cause. Tying everything to ground, or providing at least some kind of discharge path works, and even fairly high impedance paths can work because of the long time constants of the buildup.

You can use CAT6 cable to cover the runs from the head to the readers. It is shielded, and you just shunt the drain wire from one end to ground (not both ends, causes ground loops). Ferrite chokes do wonders, too. You can also replace the iGaguing cables with appropriate-length micro USB (double ended) cables, preferably ones with pre-installed chokes.

I don't have any such issues with my iGauging DRO, but I also have no VFD or hi-freq interference sources in my space, at least while I'm milling. I was curious about how susceptible they are to RFI, particularly VFDs.

mksj -
THANKS for the info! I'm probably even more more of a hack about EE stuff than you are. But it does appear from the benefit and cost tables that I lucked into an "OK" solution. I've also bought some shielding braid and was planning to install it when I saw the ferrite bead post. I'll keep an eye out for DRO problems. If I see any more, shielding will be the next step.

Pontiac -
Hadn't thought about CAT6 cable. Thanks - I'll keep that in mind, too!
H

A quick follow-up. Since adding the hard ground connection to the scales, I have not seen my DROs misbehave even once. I was using an alligator clip on my X axis DRO but it kept coming off, so I finally installed a spade connector on it, similar to what I did on the Z axis scale. It's still possible for the aluminum scale to oxidize, but hopefully it will take longer with this approach.
You must log in or register to reply here.
Share:
Facebook Twitter Reddit Pinterest Tumblr WhatsApp Email Link
It can take up to an hour for ads to appear on the page. See our code implementation guide for more details. If you already have Auto ad code on your pages there's no need to replace it with this code
Top
AdBlock Detected