I thought I had posted this before but do not see it anywhere so here it is again.

It seems that human nature is to complain when things go poorly and not say much when things go well. Going against the normal I must say something positive about an employee in the Jet Tools tech support group. Recently had a chance to see what positive technical support could be like and I have to say it was a very good experience.

The Story:
I wanted to order an extra shear pin for a Jet lathe project I am working on. The hardcopy parts book I got with the lathe appeared to be in error. I called Jet Tools and got a nice lady named Mary on the phone. I explained my part number concerns and my desire for a spare shear pin. She knew exactly what the parts were that I was talking about and emailed me an electronic copy of the manual in their data base (not listed on their website) so I could see what she was seeing. She then walked out to their distribution warehouse losing our phone connection on the way out. She called back and reported there were three different pins under one part number in the same storage bin. Using the description of the one OEM shear pin that I had removed from another Jet lathe of same model (original pin as-shipped from factory), she researched it and gave me a part number to order. She reported that it appeared a material change to the pin had been made at some point but dimensions and style were the same.

I ordered spares and picked them up at the warehouse the next morning. This will allow me to get the lathe back together and save the OEM shear pin for later. I was afraid that I will screw up learning to use the machine and would be without a spare pin. More about my concern with the shear pin design changes later!

It was a pleasant surprise that Jet's employee took the extra effort when in today’s world many employees just take the easy way out to get you off the phone.

I think I might have talked to the same lady last summer. I called for info on my mill and they had the parts in stock. Prices were a bit high but at least they do support their machines (unlike Enco). She also emailed me some pages showing how to remove the bad part so it could be replaced. Very good support.

Own several of their wood lathes for over two years - I have always had positive experience with their support (so far).
P

Benny,
Does this pin look like your replacements? If so, what is the part number?
Thanks,
Pat 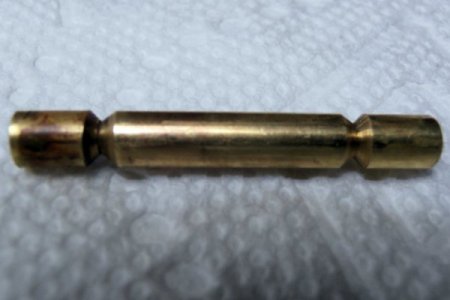 OP, do you happen to remember her extension?

Same here, I was rebuilding the spindle on my Jet 15 and contacted them. Don't remember the name of the guy I talked to but he was very helpful and emailed me some pdfs that helped a lot.
J

I need a shear pin for my 1336pbd I recently purchased the lathe and I discovered the PO had a finish nail in the lead screw..ouch !
I think I'll try to order a few from jet. does anyone have the contact info for jet ?

jbalp
You must log in or register to reply here.
Share:
Facebook Twitter Reddit Pinterest Tumblr WhatsApp Email Share Link
It can take up to an hour for ads to appear on the page. See our code implementation guide for more details. If you already have Auto ad code on your pages there's no need to replace it with this code
Top
AdBlock Detected