Of the archaic sizes I keep, many dies that I never (yet) use. Mostly as a curiosity, if truth be known. There are many archaic threads referred to as "special". I have never run across them but you never know working with old machines. There are many "holes" in the chart. Mostly, the conversion from one to the other involves a calculator. My eyes just aren't up to it, I get sleepy. 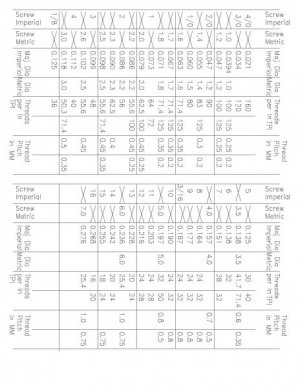 Bill -
Great chart! Thanks.
I posted a link to this thread on https://www.hobby-machinist.com/threads/metric-to-american.71630/page-2#post-601699
I expect that your chart will be very handy for folks who want to convert part drawings from one system to another.
You must log in or register to reply here.
Share:
Facebook Twitter Reddit Pinterest Tumblr WhatsApp Email Link
It can take up to an hour for ads to appear on the page. See our code implementation guide for more details. If you already have Auto ad code on your pages there's no need to replace it with this code
Top
AdBlock Detected