Making Gaskets on a CNC

Some time ago, I had a need to make some gaskets for an outboard motor that I was rebuilding. I have made gaskets the old fashioned way, cutting them out with an Exacto knife and gasket punches but that wouldn't cut it for the highly detailed gaskets that I needed. A better way was required.

Back in 2015, I had the opportunity to purchase a digital microscope. With the microscope mounted in the spindle of my Tormach CNC, I would have the tool that I needed to trace the outlines of the gaskets. The procedure was basically to pick up coordinates of key features of the needed gasket and put those points into a CAD drawing. By connecting the dots, this allowed me to easily and accurately reverse engineer the gasket. I used the drawing to create a solid model which was imported into my CAM software.
Here is the thread to that build.
https://www.hobby-machinist.com/threads/another-lathe-dro-install.34106/

The problem with making a gasket is that it can't be cut with a milling cutter. I made a drag knife which worked reasonably well but the gasket had to be glued to a backing material in order to make cuts of small details. Not the best.

Then I got the idea of cutting the gasket using a laser. I found a reasonably priced 4.5w blue laser on the internet. A bracket and adapter to fit a 1/2" tool holder were made for the laser. The laser needed to be turned off and on with the CNC controller. The easy way out was to use the flood coolant control circuit. This circuit switches 120 vac. through a relay but I needed to control the 12 volt supply to the laser. A second relay with a 120 vac. coil provided for this.

The outboard project got sidetracked and the laser got shelved for the time. This past week, I had the need for a gasket to repair a small engine. Although I have had the setup for some time, I had never used it in this capacity before so some experimenting was in order.

A two main operating parameters needed to be determined; the focal point of the beam, and the feed rate. I focused the laser at the shortest possible distance so the focal point would be as small as possible. The 4.5 w. laser is extremely dangerous and another benefit of a short focus is that the beam rapidly diverges at greater distances. Nevertheless, to prevent accidental exposure of the eyes to the beam, red safety glasses must be worn whenever the beam is on. This creates a problem as the blue laser beam is almost completely blocked so you can't see to focus the beam properly.

To get around that problem, I wrote a small G code program which increased the operating distance by .05" steps. In setting up my work on the Tormach CNC, I have a digital dial indicator mounted in a TTS holder and to reference out my workpiece, I lower the indicator until it zeroes and set my work zero at that height. Then I determine my tool offsets relative to the indicator.

I ran my program, using and arbitrary 10 ipm feed and in examining the result, it was clear that a complete burn through my gasket material was occurring at a distance between .28" and .39". I opted for setting the operating distance at .33" relative to my indicator.

That settled, I decided to go for it and use the same feed speed as my test program and actually cut a gasket. The gasket turned out well, nearly as crisp as a die cut gasket, and true to the mating parts, thanks to the spindle microscope optical comparator. Yet another tool to add to the arsenal.

Going further, the gasket that I cut was a .02" thick dark paper. Different gasket materials will have different optimal feed rates. Too fast and there won't be complete penetration. Too slow and you could actually start the gasket on fire. Every material would most likely have to be tested to optimize the feed. To that end, I wrote another G code program to vary the feed rate in steps ranging from 40 ipm down to 2 ipm.

Another factor would be the backing plate. I used a white ceramic tile in this work but the ceramic will absorb heat locally. Another option to explore would be to use a metal backing plate. The metal is more likely to reflect the beam but it has better heat dissipation properties.

As to other possible uses, one that comes to mind is making printed circuit boards. I use the CNC to mill printed circuit patterns but I am limited by the smallest diameter end mill that I can run. The smallest that I have run so far has been .024". The laser isn't powerful enough to burn the copper pattern but the thought was to coat the copper with an etching resist and burn the pattern in the resist. Then the board would be etched using traditional chemical etching.

This photograph shows the results of the focus calibration program. The castellated path makes it easy to determine where the best performance occurs. 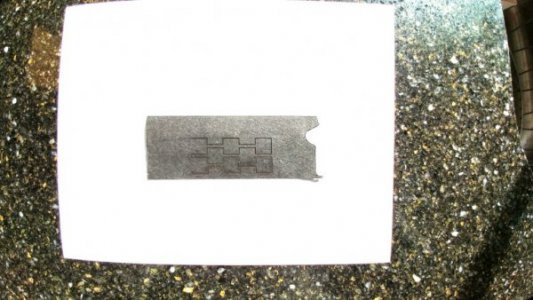 This photograph shows the laser setup. The part the gasket is being made for is in the bottom center of the photo. 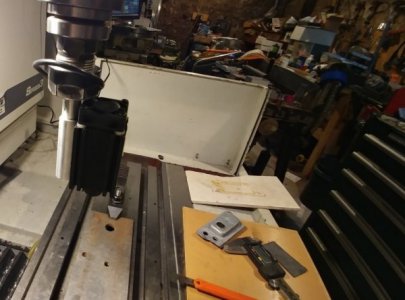 This photograph shows the laser setup with two cut gaskets in place. The laser generates no cutting forces so holding down of material is strictly for keeping it flat. In setting up the work, I set my z axis zero as described above. For the x and y axes, I used a pointer mounted in the spindle. The laser is offset from the spindle axis by .9" in the y direction so I offset my work by that much to center the laser.

This photograph is of the cut gasket. 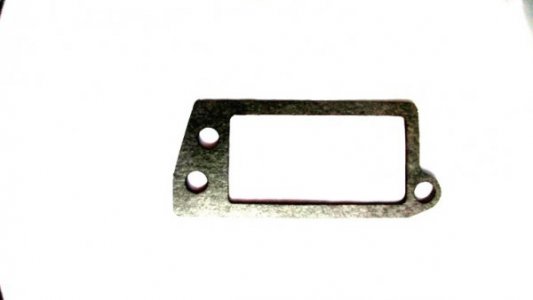 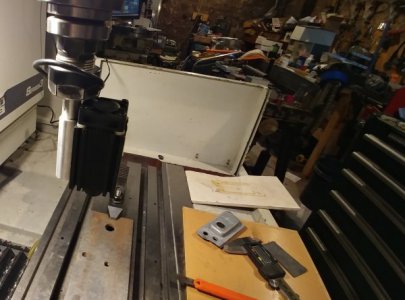 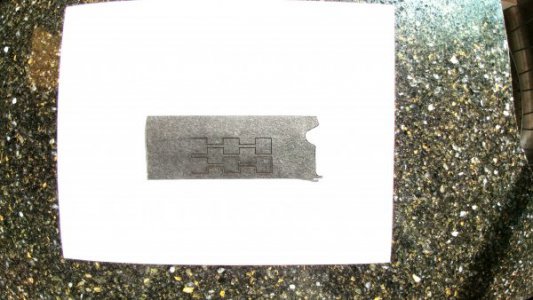 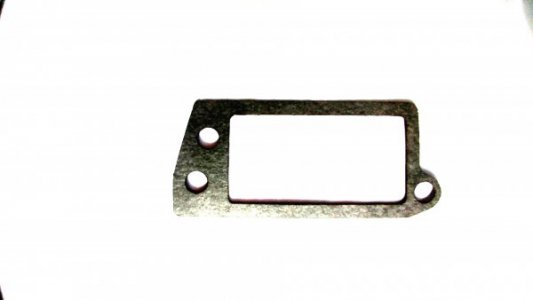 That is awesome! Do you have a link for that laser module? Looks like something I need
C

Looks like a breather gasket. That exposes the valve springs and such. Pretty awesome.

JimDawson said:
That is awesome! Do you have a link for that laser module? Looks like something I need
Click to expand...

Jim, I've had the laser for just over two years. I purchased it from Banggood.
T

I've been doing the x-acto method for gaskets as well. Rubber, not paper, and a fair bit thicker than 0.02". I read somewhere that a rough cut of the rubber gasket can be stuck in the freezer overnight, then milled while frozen. Haven't tried this yet myself, kinda curious if anyone else has.

The laser method is pretty cool though!

Cool. I was thinking about trying a similar setup, to attempt reproducing machine name and information tags.

My sister has one of those cricket vinyl cutter things, I was thinking about having her try it with gasket material, but like the other idea, its still in the thinking stage.

ThinWoodsman said:
I've been doing the x-acto method for gaskets as well. Rubber, not paper, and a fair bit thicker than 0.02". I read somewhere that a rough cut of the rubber gasket can be stuck in the freezer overnight, then milled while frozen. Haven't tried this yet myself, kinda curious if anyone else has.

The laser method is pretty cool though!
Click to expand...

Some years ago, I had to make a rubber sound absorbing mount for a small vacuum pump. I chose a fairly soft ( ~ 40 durometer), 1/4" rubber sheet. I had to cut out a rectangular profile with eight 1/4" holes. I tried the freezing but it didn't work well. The problem is the rubber would soften from the heat generated by machining. I ended up making a gasket punch and drilling the holes with that and using an Exacto knife for the profile.

Dry ice might work better though. An alcohol/dry ice bath flooding the work should keep it cool enough.
T

RJSakowski said:
The problem is the rubber would soften from the heat generated by machining.
Click to expand...

I suspected that would be the case,which has made me put off giving it a go.


RJSakowski said:
TDry ice might work better though. An alcohol/dry ice bath flooding the work should keep it cool enough.
Click to expand...

The next round of gaskets is pretty simple, just rubber rings. Need a few of them so I'll probably just make a punch out of some suitable-diameter pipe and try to stamp them out with the abor press.

RJSakowski said:
The problem with making a gasket is that it can't be cut with a milling cutter.
Click to expand...

Actually, you can. I've made quite a number of gaskets using a 1/16" end mill. Here's a sample of a couple of very simple gaskets that I made. I mount a piece of plywood or MDF to the mill so there is something soft underneath the gasket material and then I just hold it down with thumb tacks or push pins. A single pass is all it takes. They come off the mill a little fuzzy around the edges but sliding them around on a bit of medium sand paper cleans that up quite nicely.

If you are worried about the heat trying to mill rubber gaskets, I bet the tiny end mill will solve that. If not, try a 1/32" cutter. These all have 1/8" shanks ( at least the ones that I have do. )

In looking at this old thread, I see in post#1 that I had given the wrong link to the microscope build. Here is the correct link.

I had thought about building a spindle mounted microscope for the Tormach for some time. The idea was to cannibalize and old phone or adapt a webcam camera but the optics was rather daunting some the project was shelved. About a month ago, I saw an ad for a USB 50 - 500X microscope on eBay for...

I apologize for any confusion that I may have caused.
You must log in or register to reply here.
Share:
Facebook Twitter Reddit Pinterest Tumblr WhatsApp Email Share Link
It can take up to an hour for ads to appear on the page. See our code implementation guide for more details. If you already have Auto ad code on your pages there's no need to replace it with this code
Top
AdBlock Detected