Need to chuck my chuck

So I've had it with my (not that cheap, shars-sourced) keyless chuck on my drill press. I've ruined shanks of several HSS bits because of slipping. The smoother, harder cobalt drill bits survive slips better but they seem to slip more. What good is a keyless chuck when I need a strap wrench to get it tight enough?

Albreght's are nice but pricey . I believe Will ( darkzero ) has some other good ones , maybe he'll chime in . 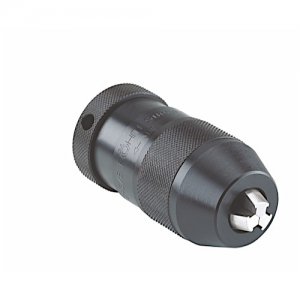 I've been satisfied with a llambrich keyed chuck. It's been holding up well and holds the drills nice and tight.

For keyless, I have a glacern that works well and doesn't seem to be slipping. I use it in the lathe mostly, but I do have an R8 adapter for the mill and use it when I plan to do bit changes and not using any reduced shank or taps.

mmcmdl said:
Albreght's are nice but pricey . I believe Will ( darkzero ) has some other good ones , maybe he'll chime in .
Click to expand...

My keyless chucks are 2 Albrechts, a Bison, a Glacern, & an Italian made Jacobs. None of them have ever gave me slipping problems just tightening by hand even with using solid carbide drills. The Glacern I've used the most on the mill & the Bison for the lathe. But on my drill press I still prefer a keyed chuck, have a Jacobs 14N on my little benchtop DP.

I agree on the Rohm & Llambrich recommendations. I realize most people would not want to spend that kind of money for a DP but Albrechts & Rohms you can often find used. LLambrichs not so much but you can find deals on Amazon for them if you wait patiently. Most Accupro (MSC house brand) chucks are made by Llambrich & cost less, look for the ones that say made in Spain.

This is my Rohm in the tail stock of my 14/40, I have the same chuck for the mill. Just like a Starrett square or a Snap-on wrench, it does it's job , does it well and never complains. Cry once and then enjoy dependable quality. 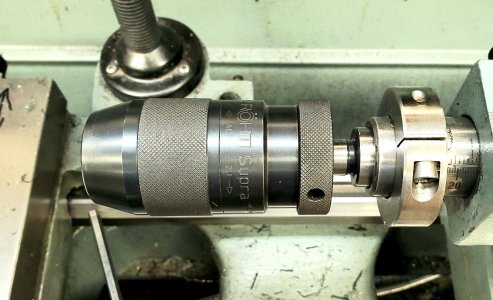 I have two of the PM keyless chucks. They've worked well. I do use a spanner when drilling with Silver & Deming or hole saws because of the extra force they put on the jaws. May not need to.

I'm another one that doesn't have much use for keyless chucks. I have a couple Albrecht's, but of the 2 dozen or so chucks I have they're used the least. Personally I prefer the older Jacobs 14N, 16N, and 18N models. The older Made In The USA models have the Jacobs name and model number engraved on them, not printed on. I have 3 of each of these models. The newest are about 20 years old, and the oldest are going on 40 years old

They are the super ball bearing series, and can be rebuilt if they wear out. They aren't cheap, but they are far less expensive than the Rohm's or Albrecht's. Another far less expensive well built brand is the original Golden Goose. The original company is out of Taiwan and the keyed models have been discontinued by that company.

You have to be careful when looking for this brand. Mainland China started copying the originals. The counterfeits were so plentiful, and so bad the original company stopped making them. Too many people were buying the counterfeits thinking they were the real thing. When they fell apart the customers were trying to return them for credit or replacements only to find they had been duped.

The originals have a bright steel finish and come in a red and black box. While the name is Golden Goose their logo looks a lot more like a pelican. Like the older Jacobs chucks the originals have a bright finish with the name and model number engraved on them, not printed on like the counterfeits. The counterfeits have a satin finish and come in a variety of boxes including a copy of the original red and black box. I have 4 of the originals with the oldest being about 36 years old, and the newest about 5 years old.

All the chucks of both brands are accurate, and just as good as the day they were purchased. I haven't tested them in a while. The last runout test was around 5 years ago when I purchased the latest Golden Goose. All had between .001" and .002" runout at the time.

If you decide to go to a keyed chuck both of these brands are available on eBay at reasonable prices.

For a drill press I definitely prefer a Jacobs key chuck. I have a couple of Rohm keyless chucks for my milling machine, but I have yet to figure out why I should like them better? Maybe they are supposed to have less runout???

I have several Chinese chucks that are too heavy for fishing weights but too light for boat anchors. Some day I will figure out what to use them for.
You must log in or register to reply here.
Share:
Facebook Twitter Reddit Pinterest Tumblr WhatsApp Email Share Link
It can take up to an hour for ads to appear on the page. See our code implementation guide for more details. If you already have Auto ad code on your pages there's no need to replace it with this code
Top
AdBlock Detected