I just acquired a second Logan lathe. This one is a 1947 model 1820 "10inch" swing. From my nubie perspective the lathe is in moderate shape and this one has the quick change gear box and a oil bath apron with a power feed clutch that my MW / Logan 2136 lathe does not have. Here's my question. The motor it came with is not original and is only 1/3 hp. In addition it has a on/off/reverse switch right in the motor housing itself, very inconvenient and a little unsafe. I have a reasonable 1 hp motor that is looking for a home. My question is, is there a negative side to having a larger than recommended motor? Second question, if I get a new 1/2 hp motor to replace the existing motor, do you have a favorite make,etc? Thanks for your thoughts, John in Minnesota


Sent from my iPhone using Tapatalk

No problem using your larger motor if it fits, for a 10" lathe I'd want at least a 1hp anyway.
I put a 1hp 3 phase Baldor motor with a TECO VFD on my 9" Seneca Falls lathe and I love it. 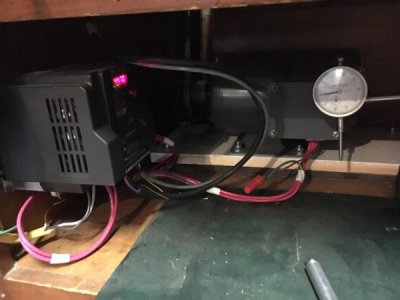 Remove the wires from the switch mounted to the motor, and extend them to where you want the switch. Mount the switch, wire it, perform a smoke test. If replacing the motor, wire it as appropriate and as you please.

I, also, am a firm believer in Baldor especially Farm Duty motors. My machine is a single phase, 12" Craftsman, same as Atlas 10". It had a 1/3 HP motor from the factory. I wasn't real pleased with a motor I felt was too small, so I went with a Baldor 1/2 HP from the local motor shop.

My motors are NEMA 56 frames. There are several that fit in similar spaces. That is the only real issue when changing to a larger motor. Going to a 1.0 HP motor on a small machine is a little spooky, as in the motor is the least expensive part of the machine, yet could well bend (or break) something in the drive train.

That's where your own judgement comes in. Electrical parts will need upgrading as well. An AWG-16 line cord would be a little small. You would need a real reversing switch, a toggle switch wouldn't cut it. Things of that nature. Otherwise, go for it. No reason not to. Just watch the RPM of the motor.

The 1 HP motor will buy you one thing for sure and a second if & when. The one thing that is for sure is that your electricity bill will go up a little. The if & when is two-fold. First, if you ever do have a crash, the amount of damage done to the lathe will be increased. Second, the excessive motor size will tend to make you run higher DOC's which will accelerate the wear on the machine and increase the risk of breaking something. In brief, you should never exceed the manufacturer's recommended motor size. If you must run 1/4" or more DOC, then buy a machine made to do it.

As far as motor manufacturers are concerned, Baldor is good. I have always been satisfied with the better grade of motors sold by WW Grainger. But regardless of who made it, do NOT buy one with an auto thermal overload breaker. Not even if it happens to be the best deal. Buy manual reset only. The auto type resets and restarts itself when it has cooled off a little. If your hand happens to be in the way when that happens, you may lose it.

Yeah, looks a little smaller than my Seneca Falls.

I suspect you'll be surprised at the difference in a 1hp motor from 1947 and a modern one. My lathe is a flat belt model so a little more forgiving as far as powering it goes. If I was in your shoes and had something that would bolt up I wouldn't hesitate to try it.

Logan's recommended motor for your lathe is either 1/3 or 1/2 HP @ 1750 RPM. My 10" Logan has a 1/2 horse
motor and it's fine, though I run my flat belt a little loose to avoid problems if I Do Something Stupid. I would think 1/2 or
3/4 would do the job for you. As others have said, excess power can result in damage, or at the very least belt slippage,
which eliminates the advantage of the extra power in the first place.

You might want to consider is whether you want a single or 3 phase motor. With 3 phase, you either need
3 phase 220 or single phase 220 and a VFD to drive it which has the advantage of giving you speed control. 3 phase
is also a bit smoother than single phase 110V. My model 200, which is similar to the 820 has limited space around the
motor. When I looked at NEMA 56 motor specs, I realized that the capacitors on 110V motors are mounted
on top, which can interfere with the drive box above it. Some motors also have junction boxes on the side which can
interfere with the area around the belt tensioner. So, be sure to verify clearance before you buy anything. I wound up buying a
Dayton 3 phase/VFD setup, which fit perfectly in the space available. I buy NOS motors off of eBay at about 50% of list.

Thanks for your thoughts on the motor. Think I will order a rotary drum switch and use the 1 hp motor for awhile and see how the old lathe likes it. May think about Vfd in the future if funds allow but for now my budget and my skills need time to grow. As always the members on this site are awesome. John. Minnesota

Follow up, I have not yet measured to see if the 1 hp will fit with its capacitor hump. I too have flat belts so there will be some forgiveness in the setup. I appreciate and hear your safety and wear concerns and I will take them into consideration. I will let you know how it all works out. May be a bit before I get a chance to work on this but I will update on decisions and pictures then. John

I replaced my 1/2 with a 3/4 because I found it cheap... the 1/2 had something wrong with it seemed lacking power.. runs great with the 3/4. worrying about the power bill is really going a bit far you will never notice the difference! use what you can find at a decent price as long as its bigger then the 1/3 or 1/2 it calls for your golden

My electricity bill comment earlier was a bit tongue in cheek but it involved replacing a half HP with either a 1 or 1.5 HP. And it was an after-thought after mentioning several other reasons not to double or triple the motor size over what the OEM recommended.
R

I think the biggest thing to remember is somethings gotta give if you crash or bind up. I keep my belt a touch looser then it could be it kinda acts like a clutch. with more power available at the motor more bad things can happen if you don't have a safeguard.. some lathes have a shear pin on the there leadscrew... logans don't! least my model dont

And the other thing to remember is that the purpose of a shear pin or a slip clutch like the late Atlas 12" has is to protect the lead screw drive train. If you run the carriage or something on it into the chuck, the only benefit those parts see from pin or clutch is that the gear train doesn't continue trying to make the damage worse. But they do nothing to reduce the other damage. The only two things that will do that is to either stall the motor or slip the belts.
You must log in or register to reply here.
Share:
Facebook Twitter Reddit Pinterest Tumblr WhatsApp Email Link
It can take up to an hour for ads to appear on the page. See our code implementation guide for more details. If you already have Auto ad code on your pages there's no need to replace it with this code
Top
AdBlock Detected