Well today is the 190th day of the year and the box has been in 19 individuals hands. Obviously that's a 10 day average per person. All in all not to bad.

Box on it's way. Thanks for letting me play! 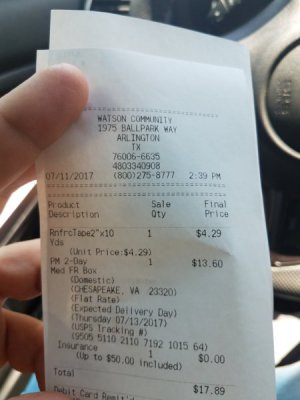 Did they make you put the strapping tape on it?

It has arrived. I expect to have box back on the road Monday July 17, assuming the next in line gets me an address.

A first pass through the box found some interesting stuff. Not the 4x6 band saw I was hoping for, but interesting stuff none the less. I found that the contents of the **REDACTED** is missing. I could repopulate it if someone could supply a guide to the materials. The next address has been received. I expect the box to be on the way early next week pending repopulation..
Last edited: Jul 13, 2017

And back towards the left it goes.

RandyWilson said:
Did they make you put the strapping tape on it?
Click to expand...

They wanted me to use it, but didn't require it. The box fits in the flat rate box like a glove!

Yep. it fits perfectly. I could just imagine some militant postal worker demanding the strapping tape for safety. If things go bad enough that it's needed, the tape isn't gonna slow it down in the least. 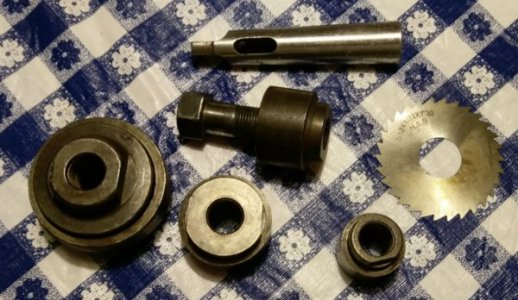 Out of the box came a 2MT-3MT sleeve, a ninja star thingie, and a hole punch die set. Man, have I got a use for those punches. I was not looking forward to doing it with a hole saw.

Into the box went... well, it's still overfull.

RandyWilson said:
Out of the box came... a ninja star thingie
Click to expand...

The four females of the house call it a ninja star thingie. They can't be wrong....


USPS out did themselves. From my hands in Chesapeake to a front porch in Reno in 28 hours.

I'm still chuckling, Randy. I don't know why, but that name for that slitting saw really hit my funny bone. Problem is that I KNEW that you knew it's proper name, so I also knew that there had to be a story behind it. Either way, it brightened up my day!

Are those difficult to throw...I am trying to imagine how to grip it?
Robert
Last edited: Jul 18, 2017

That's ok, I have a lot of what-u-call-its and thing-a-mu-jigs. And the wife just shakes her head when I have everything out of the box in the middle of the floor looking at everything. She is like are you going to get that all back in there, I say no, I 'm keeping some and adding other things in. She just walks off. I do not complain about her Habits (hobbies) and she does not complain much about mine. But I like her name for the saw.

I received the box last week and will be mailing it tomorrow.

I grabbed a "gas" ID tag and an Acme Tap. See the following picture. 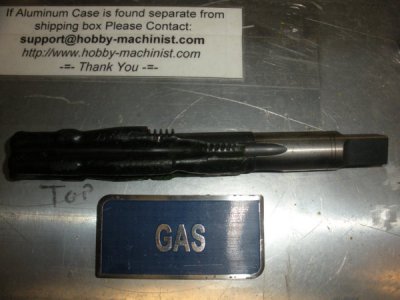 Have the box in hand and will go through it Tomorrow. I will have it in the mail on Monday providing I have the next person on the lists information.

At this rate we may get partway around a second time this year, Good luck on what you find. Ken

It will be out the next day I get it, unfortunately the stuff I have to go in it won't fit, I'll find somthing x2

kvt said:
At this rate we may get partway around a second time this year, Good luck on what you find. Ken
Click to expand...

Remember, if any of you want another stab at it, you can sign up again, you just need to have at least ten other people between your last time and next time for the box. The list does not automatically repeat itself. By having to sign up again, it changes who you might receive the box from as well as what kind of contents it may have.

There's a little story behind the ninja star... I acquired it deep in the Amazon (.com) jungle, except that my R8 ninja star thrower has a key so I ordered a star with a keyway slot. I just can't seem to get enough spin on the ones with the plain holes, they just bounce off my enemies without doing much damage. It's probably my technique, need more wrist action but dang those things are hard to throw and I need all the help I can get. The Amazon supplier even displayed a picture with a keyway slot just as I wanted, but they sent me the star you got. I complained to Amazon (sent them a picture of it captioned "A Hole!", which they might have taken the wrong way) so they said oh terribly sorry and sent me ANOTHER one just like it, perfectly round hole and still no keyway. Now I had two stars, no key slots, no patience left and so I just gave up and used a hacksaw. It was a bit rough but it got the job done and I've given up on throwing stars for now, might try again someday if a need arises. Best of luck with them.

Box is on its way to dlane this morning

Received box today , will be in mail Friday.
To hot to look thru it now in shop , I'll check it out tonight

Terry
you can through my name back on the bottom of the list.

dlane, do what I did open it up in middle of the living room floor. Did get a few looks, Then went out got my stuff and brought it in and filled it back up.

Good plan Ken, as it's all over my living room floor now, headed out to the shop to find some goodies
To put back in it .
It may head out tomorrow to TDPercell , I have his info, but Friday for sure

Here's what I kept, I'll try to get it out tomorrow. 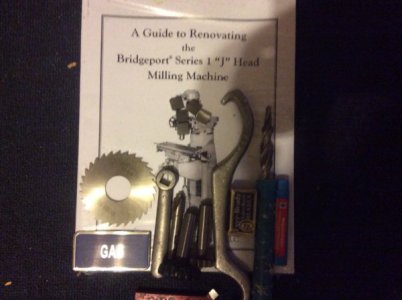 The box arrived today. That sucker is heavy. Kind of amazing to think that they deliver it from California to Illinois in two days for $13.60. I'll go through it tomorrow and get it back in circulation on Monday (if I have kiddcaprix's address by then).


Sent from my iPhone using Tapatalk
B

when I got the box earlier this year there were no screws attaching the lid to the box so I installed 4 ea nutserts all I had. If they didn't hold up then there is no use installing more as they wont hold up either need to come up with another lid attachment system bill

The lid had all the screws in it , seems fine

Yes, it had 8 nutserts, all still holding. The key is not to crank down on the screws; just two-finger-snug. Even if they do loosen somehow, they can't back out because of the outer box.

I would like to be readded also please. Autonoz, I sent you a p.m. about it.

Sent from my SM-S320VL using Tapatalk